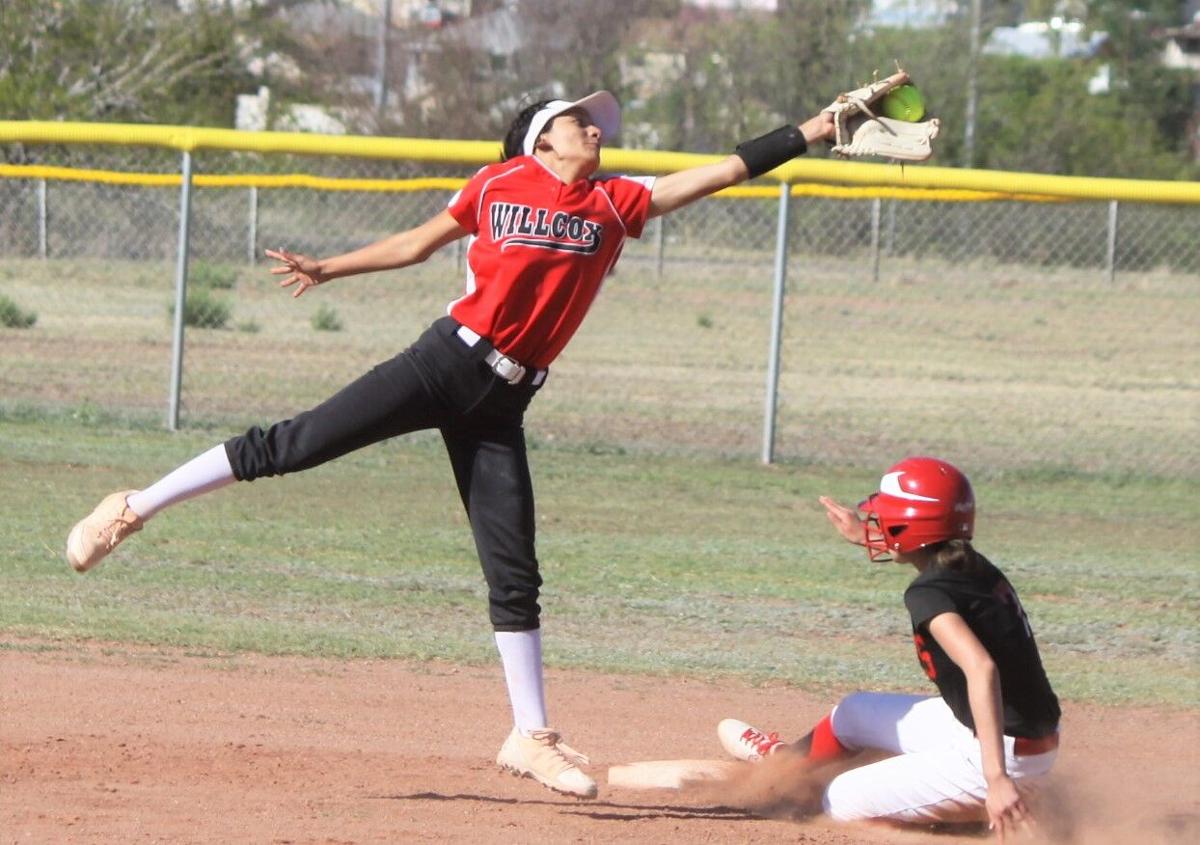 Willcox shortstop Jazlyn Felix does her best to keep a throw from going into the outfield while Valerie Wright of Bisbee slides safely into second base in 2A South softball action Friday in Bisbee. 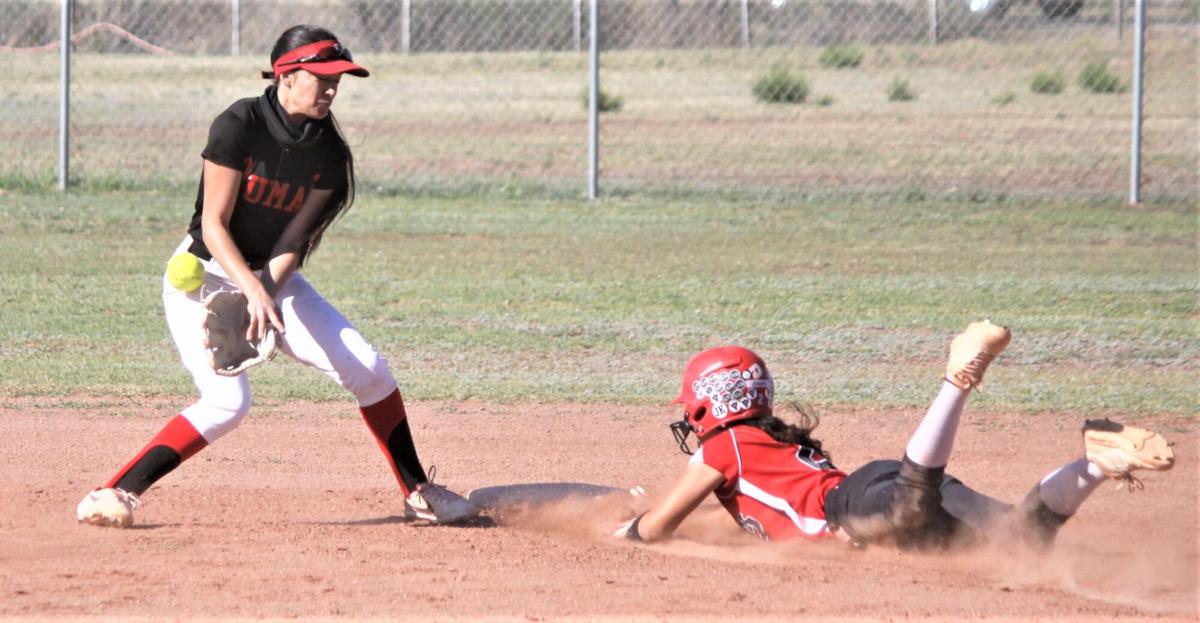 Jenitzia Valenzuela is unable to get a glove on the ball as Braxton Hammons of Willcox slides safely into second base in the top half of the first inning.

Willcox shortstop Jazlyn Felix does her best to keep a throw from going into the outfield while Valerie Wright of Bisbee slides safely into second base in 2A South softball action Friday in Bisbee.

Jenitzia Valenzuela is unable to get a glove on the ball as Braxton Hammons of Willcox slides safely into second base in the top half of the first inning.

BISBEE — Friday’s 2A South softball rematch between the Bisbee Pumas and the Willcox Cowgirls was a lot closer than the previous meeting.

Willcox needed a six-run sixth inning rally to overcome an 8-4 deficit and record an 11-8 win.

In the earlier meeting several weeks ago in Willcox, the Cowgirls shut out Bisbee 10-0, limiting the Pumas to just one hit.

In Friday’s rematch, the Pumas equaled their hit total from the previous game right off the bat and also averted the shutout when leadoff hitter Jenitzia Valenzuela sent a solo blast over the right-center field fence, giving Bisbee a 1-0 lead.

Willcox took the lead in the top half of the second as Maylee Thompson had a two-run single and sophomore Braxton Hammons had a fielder’s choice that scored a run, putting the Cowgirls up 3-1 .

Willcox maintained the lead until the bottom of the fourth when Bisbee rallied for six runs and a 7-3 lead. Melissa Villegas had an RBI fielder’s choice that scored Naelani Borbon with the tying run. Moments later Mariah Long scored, and Alexia Lopez’s bases-clearing double increased the Pumas’ lead to 7-3.

Willcox countered with a run in the top of the fifth when Maddy Tunks scored.

Bisbee came right back in the bottom half of the inning and pushed the lead back to four when Long scored on Adremina Martinez’s base hit.

Willcox began the top of the sixth with a solo blast from Allison Wilson. Daleigh Ebert then smacked a two-run double, pulling the Cowgirls within one at 8-7.

Brandy Larson, who was injured in pregame warmups and did not start, stepped up as a pinch hitter and crushed a three-run home run to right-center field, giving Willcox a 10-8 lead. Allison Wilson’s run in the top of the seventh concluded the scoring.

Alizah Romo and Valenzuela pitched for Bisbee, with Romo starting, then being replaced by Valenzuela, only to re-enter the pitcher’s circle in the top of the seventh.

Jesse Gonzalez went the distance for Willcox, picking up the win.

“I’m proud of my girls because the last time we played Willcox we got run-ruled,” Bisbee coach Melissa Wright said. “My girls have come around amazingly. We made some little mistakes but those didn’t cost us the game. These girls played hard the entire game.”

“This was the longest game she has pitched this season,” Wright said. “My other pitcher hit the home run for us at the start of the game. Most of my girls had some pretty good hits today.”

Wright said despite the loss she feels her team still has a good chance of making the 2A state playoffs.

“We needed this win,” Willcox coach Trevor Ward said. “Right now we’re sitting sixth. As I said early in the season this is the best Bisbee team I’ve seen since I’ve been coaching softball. In the overall scheme of things this is mentally big. We have prom going on. The girls never gave up, they found a way to win. Champions do that. I’m proud of the girls for staying in the game and playing hard.”

Willcox improves to 12-2 overall, 8-2 in conference, 5-1 in region. Three games are on tap for the Cowgirls this week, beginning with a home game Tuesday against Tombstone followed by road games Wednesday at Desert Christian and the regular season finale Friday at Benson which could decide the 2A South regular season champion.

Bisbee, 7-5 overall, 4-4 in conference, 4-3 in region, was in Elfrida Saturday for a non-region game with Valley Union. The Pumas will play their final game of the regular season Monday at home against St. David. Game time is 4 p.m.

The Herald/Review’s Steve Reno contributed to this article.