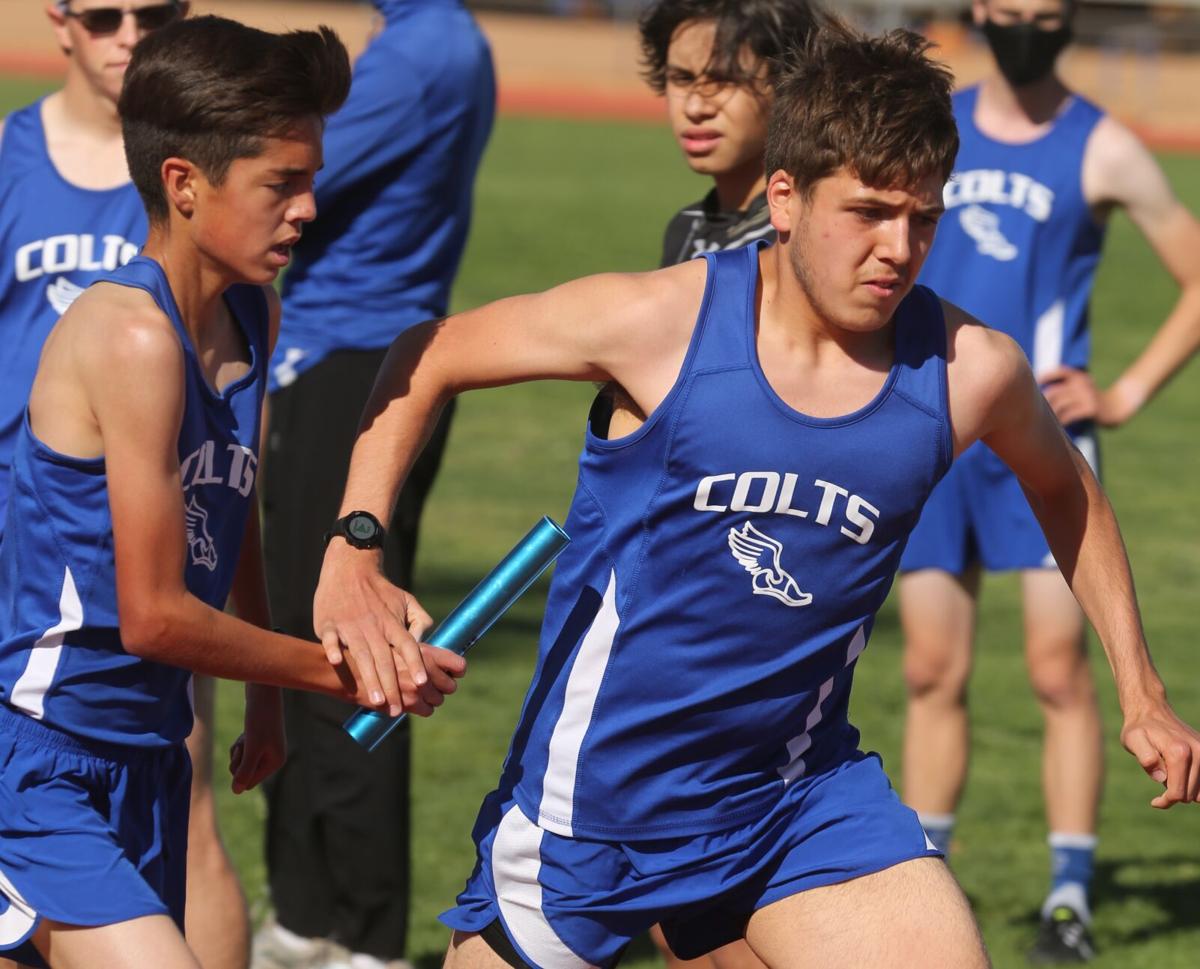 The Colts' Sebastian Ramsey and Nick Hiser pass the baton during a relay race in a meet against Douglas Wednesday at Buena. 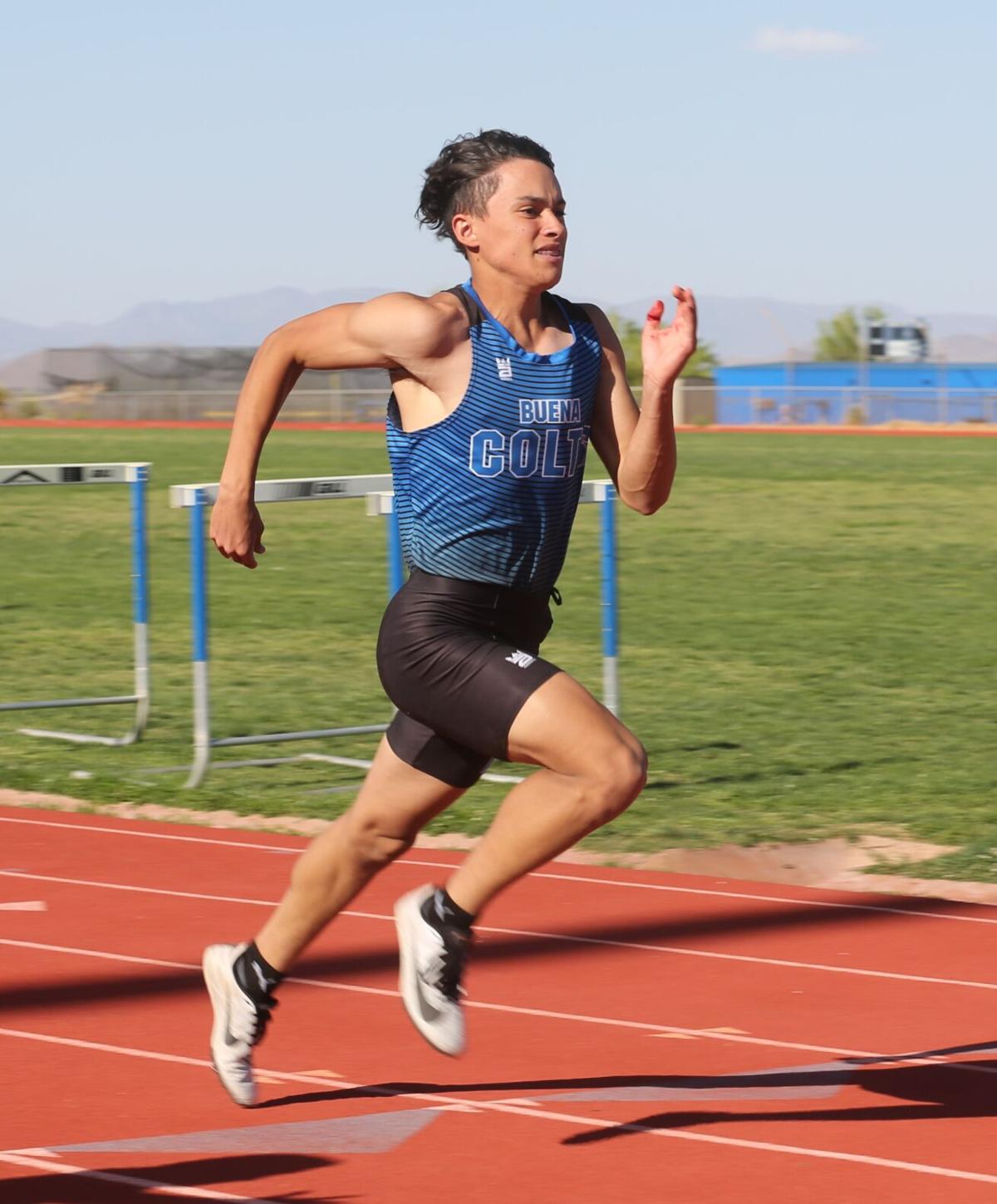 Jackson Glamann is a first-year sprinter at Buena.

The Colts' Sebastian Ramsey and Nick Hiser pass the baton during a relay race in a meet against Douglas Wednesday at Buena.

Jackson Glamann is a first-year sprinter at Buena.

They won the big one when they had to.

Buena’s baseball team showed it remains a force to be reckoned with, closing out 5A Southern Region play Tuesday with a 5-3 victory over Nogales.

Buena moved to 9-4 overall, 4-4 in the region, finishing in fourth place. More importantly, with the victory and a 16-3 romp over Tucson Rincon/University on Thursday, the Colts moved to No. 14 in the state rankings, which keeps them in line for a spot in the state playoffs. The top 16 teams in the rankings are in the state tournament.

“I am very proud of our guys tonight,” Buena coach Mark Schaefer said after the Nogales game. “They fought though some adversity and kept their composure to finish the game. All members of our team contributed in some way today; the bench was in the game the entire time. They gave the starters encouragement and support all night long.”

Two scoring bursts and the pitching of Cezar Fernandez paved the way against Nogales.

The Colts scored three runs in the second inning. Luke Serna led off with a double down the left field line. Cole Godfrey singled, Serna moving to third, and Sam Pitts was hit by a pitch to load the bases. Infield singles by Owen Abrams and Jon Enright scored two runs and another scored on Josh Watt’s sacrifice fly.

In the two-run fourth inning, Abrams singled to lead off. Two infield ground outs moved him to third and Fernandez walked. Austin Grimm’s double to right center scored both runners.

“The pitching was outstanding,” Schaefer said. “Starting pitcher Fernandez struck out 10 with only one walk over six innings. He had to be pulled because of pitch-count restrictions. Sam Pitts came in the seventh for the save. After giving up two singles, Pitts threw a ground ball for a double play to end the game.”

Buena hosts Tucson Flowing Wells on Tuesday and is on the road at Oro Valley Canyon del Oro on Wednesday.

The girls also concluded 5A South play, smacking Nogales 17-2 and then getting past Rincon/University 5-2.

Buena’s big inning against Nogales was the seventh. A Katie Serna single, an Amiya Matthews double and a home run by Cheyenne Cunningham helped produce five runs. Sophia Griffith was the winning pitcher, allowing one hit, no runs, no bases on balls and striking out six over five innings.

Griffith was in charge on the mound. She went the distance, allowing five hits, striking out 15 and walking none.

Maintaining their position in the rankings is key for the Colts. The first eight teams in the 16-team state tournament, based on the rankings, will host first-round games on May 8.

The inexperienced Colts concluded the season with a 6-3 victory over Tucson Sunnyside and a 7-2 loss to St. David. Their overall record was 6-6.

“We ended up going 6-6, not what we had in mind, but it could have been worse,” coach Jacob Weiss said. “Offseason training started yesterday, you could expect to see the entire Buena boys team playing at Kings court on their own time. We had three matches this year where we didn’t have our entire roster present and we could have won those three easily if everyone was there.

“I’m going to make sure everyone is present for all matches next year. Players need to plan their family vacations ahead of time and around our game schedule!

“It’s back to the drawing board, make the boys play tennis the WHOLE offseason. Five of my current players will be seniors next year. It’ll be like Michael Jordan/Phil Jackson, Last Dance.”

“Next season, I hope that we are able to have a full preseason opportunity, and possibly a summer camp this summer as well to help girls who may not have an opportunity to play very much to keep their hands in the game,” coach David Harris said.

“If we are able to have the preseason warmup time we normally get, plus time to recruit players and assure them that they will actually get the chance to be on a team and that the season won’t be canceled on them (one reason we also struggled with recruiting players this year), then I think it will be a very good season to build on what we accomplished this year, take those who are returning to the next level of performance, and play some good tennis!”

The teams had some impressive performances at the Lancer Invitational April 17 at Tucson Salpointe Catholic High School, including first-place finishes by Caleb Danielson and William Stemler.

The teams were at the Nighthawk Invitational Friday and Saturday.

In partial results available at press time, Stemler had another second-place finish in the shot at 50-01 — missing first place by a quarter-inch to Marana Mountain View’s Sam Halaufia.

The boys had three games last week, losing 3-0 to Vail Cienega and Oro Valley Ironwood Ridge and 3-2 to Tucson Sabino. Buena’s record is 2-9.

The season concludes next week with at home match against Tucson Desert View on Tuesday and away matches at Tucson Flowing Wells on Wednesday and Tucson Sunnyside on Thursday.