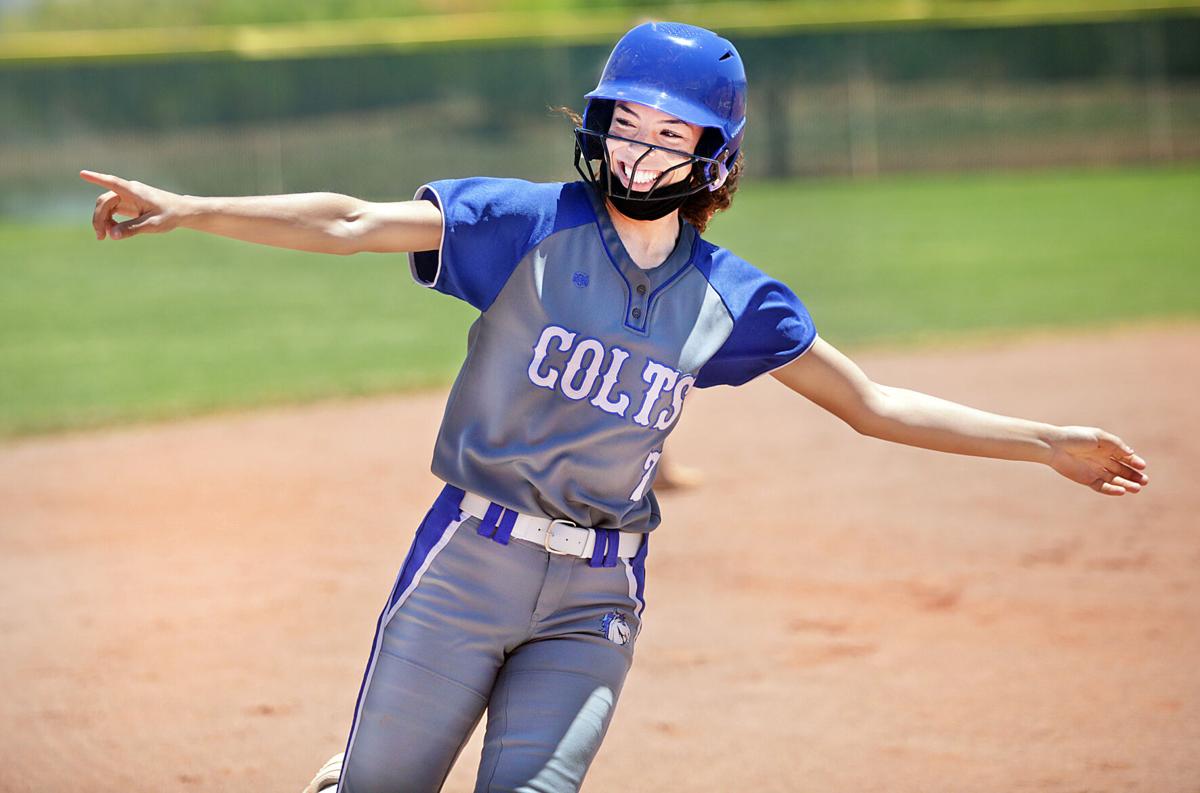 Buena senior Jazmyn Gilliam acknowledges her teammates while rounding the bases after hitting a solo home run in the fourth inning. The homer was the first run of Saturday’s first-round Class 5A state tournament game against Peoria Centennial in Sierra Vista. The Colts won 3-1. 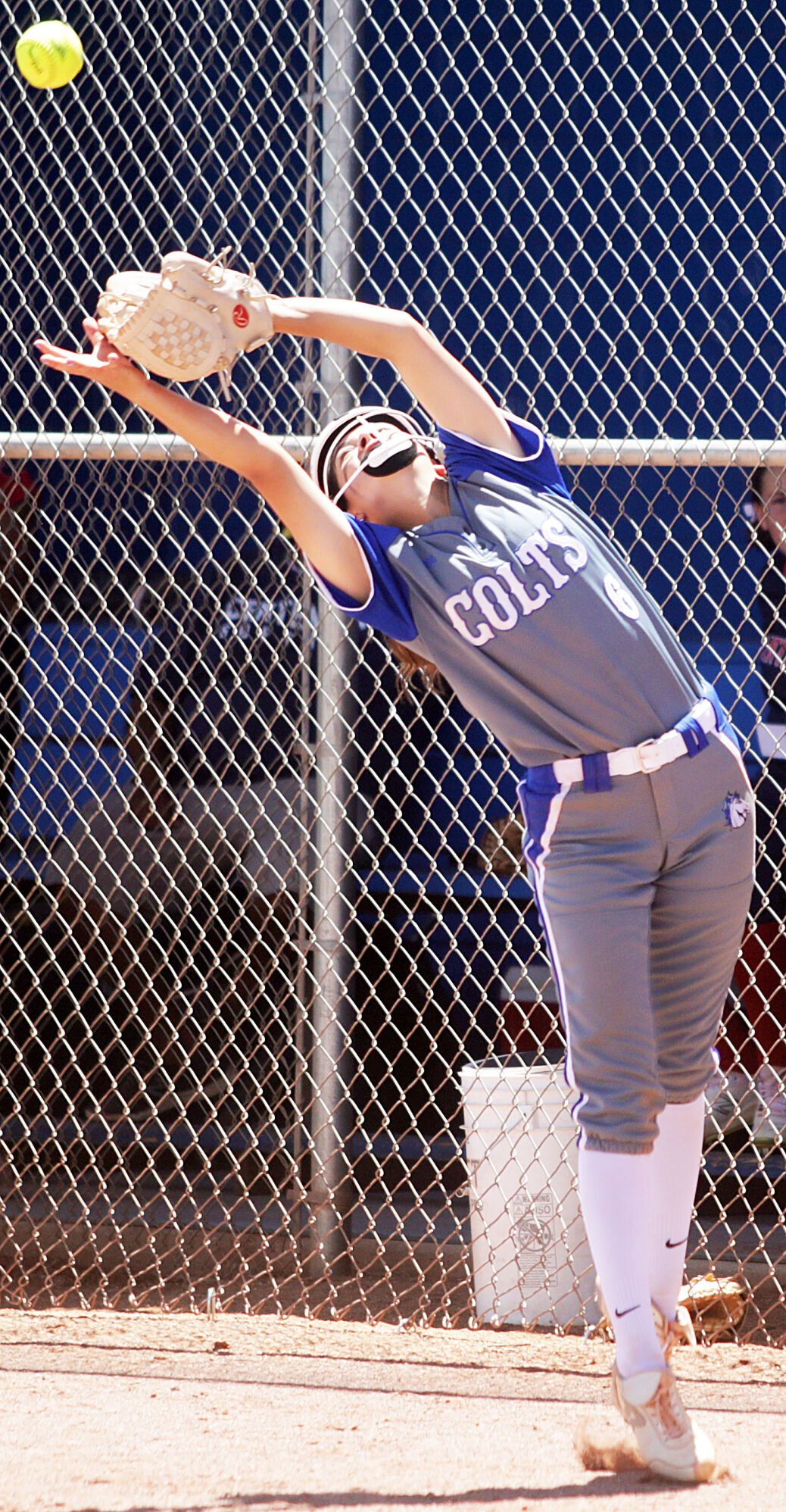 Buena freshman first baseman Katie Serna bends with the breeze while attempting to snag a foul ball versus Peoria Centennial. 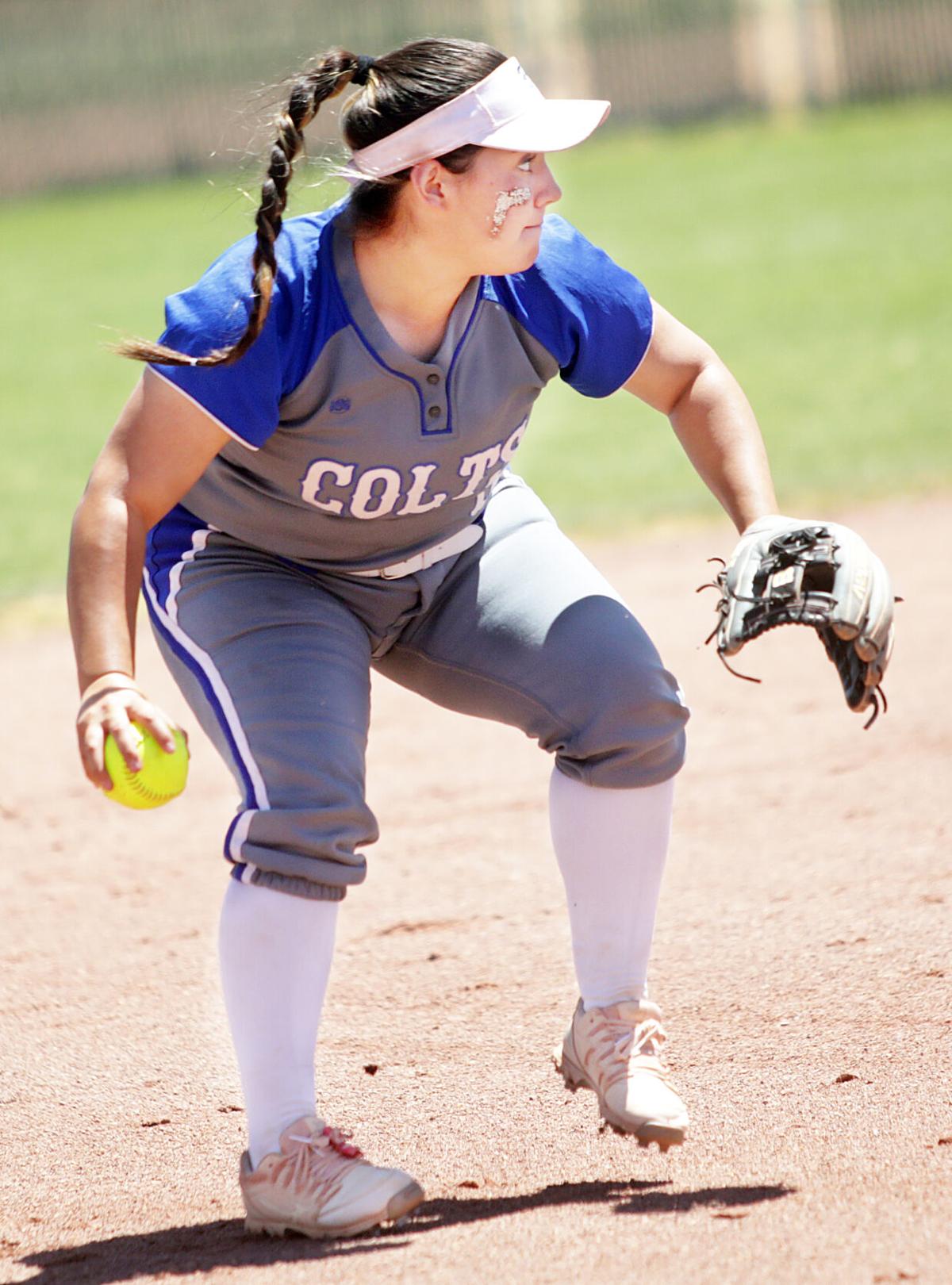 Senior shortstop Cheyenne Cunningham zeros in on first base after gloving a grounder Saturday.

Buena senior Jazmyn Gilliam acknowledges her teammates while rounding the bases after hitting a solo home run in the fourth inning. The homer was the first run of Saturday’s first-round Class 5A state tournament game against Peoria Centennial in Sierra Vista. The Colts won 3-1.

Buena freshman first baseman Katie Serna bends with the breeze while attempting to snag a foul ball versus Peoria Centennial.

Senior shortstop Cheyenne Cunningham zeros in on first base after gloving a grounder Saturday.

The streak is alive. And now Buena High’s softball team finds it is one of eight remaining teams in the Class 5A state tournament.

The eighth-ranked Colts took care of business Saturday, dropping No. 9 Peoria Centennial 3-1 at Coppola Field. Their reward: a second-round matchup Tuesday at 4:05 p.m. against the No. 1-ranked Surprise Willow Canyon Wildcats.

“They all played well today,” Buena coach Mike Tomooka said. “The outfield, there were some pretty challenging fly balls, and they played well. Sophia (Griffith) did a good job pitching, a very good job.

“Our kids did not give in to this pitcher (Centennial’s Meghan Golden), who I think they were saying she had 180 strikeouts this season (196 according to azpreps365.com). The girls just played tough.”

Besides advancing to the next round, the Colts gave Tomooka a little extra something in his 11th season of coaching Buena.

“I said, ‘You guys make me proud,’ ” he said. “You kept the string going during my tenure here. We haven’t lost a home state tournament game, this is our ninth, I think. So I told the girls, ‘You guys are pretty phenomenal. Way to go!’ ”

Centennial’s Golden did post 13 strikeouts, but got little help from the Coyotes’ offense.

The Colts got rolling in the fourth inning of a scoreless game as senior third baseman Jazmyn Gilliam belted a solo homer.

As Griffith was keeping Centennial off the scoreboard, Buena scored again in the fifth. Mariah Cunningham sacrifice bunted runners to second and third, leaving it up to sister Cheyenne Cunningham.

“Cheyenne had a good AB (at bat) and got a double down the third base line on the ground, just snuck it past the third baseman, and that gave us two insurance runs.”

But it was Griffith who controlled the outcome. The junior right hander allowed six hits while striking out six in going the distance. It was her 11th victory of the season.

The next challenge is Willow Canyon, which has posted some ridiculous scores and have outscored their opponents 256-20.

“We’ll head up there and just give it our best,” Tomooka said. “Can’t ask for anything more. I don’t think these kids were predicted to be as successful, just from other coaches, maybe the media, Tucson papers. But they really have worked hard. A lot of it is learning curve, and they’ve got to figure out what we’re trying to teach them is to help them get better. I think, hopefully, they’ve realized that.”

Tomooka ensures the learning curve extends off the field.

“We’re coming down to the end of school,” he said. “So I’m going to send out an email today and tell them that if anybody has a ‘D’ as of Monday practice, they’re probably not going to travel and miss a day of school. I don’t allow them to play with Ds. The district says it’s OK, but my attitude is if you can’t do the C and above, you probably shouldn’t be doing extracurricular activities. You should focus on school.”