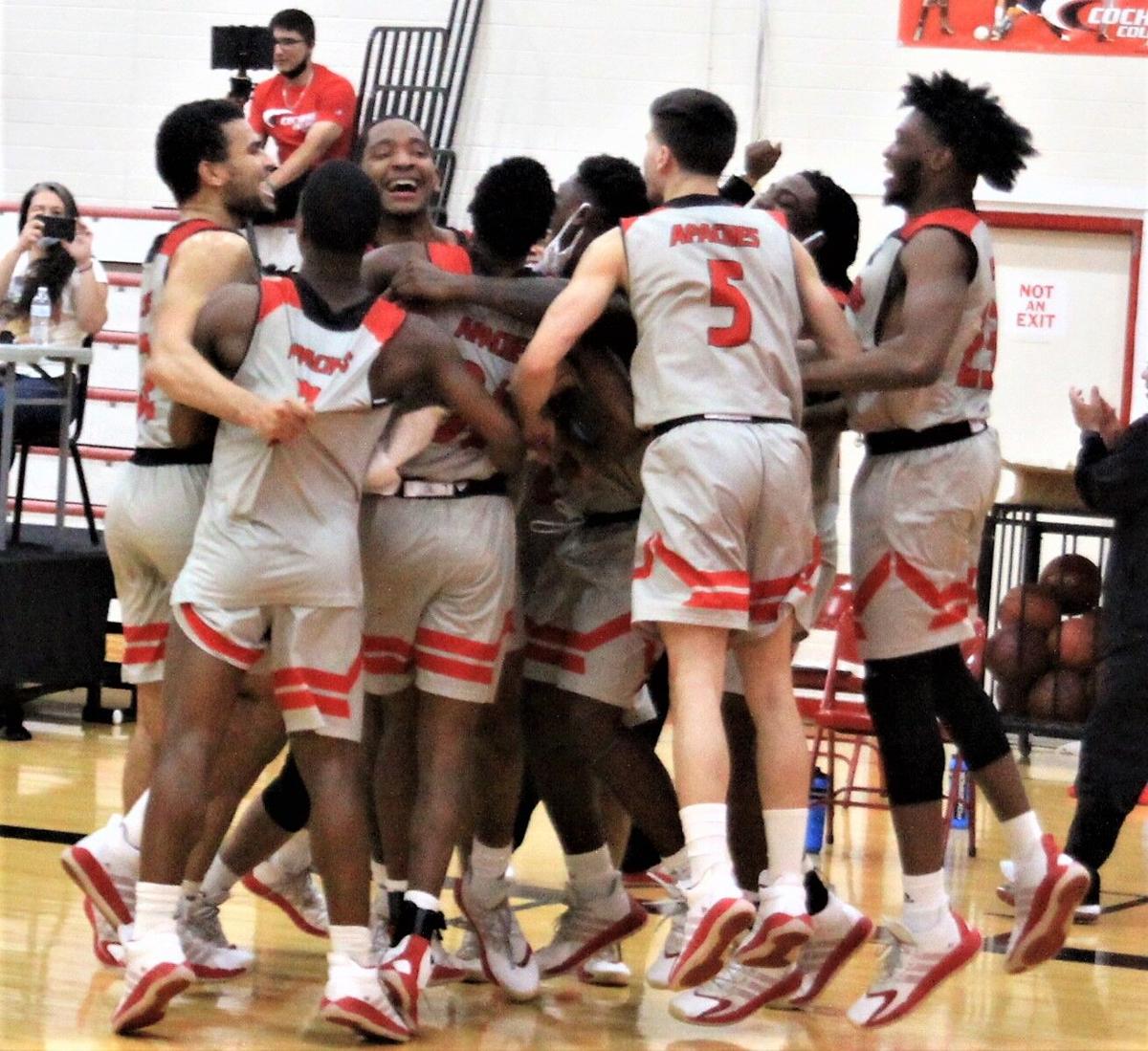 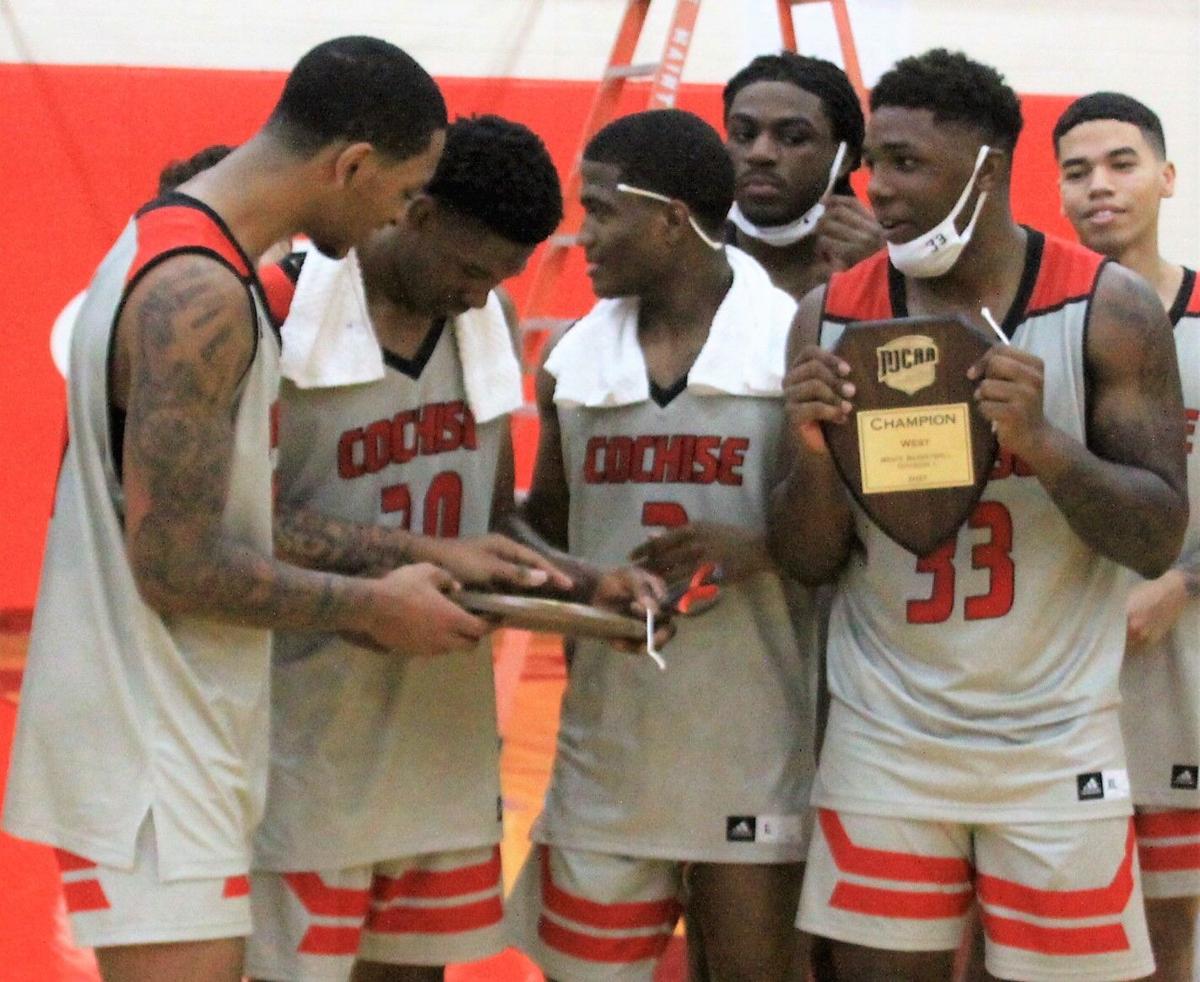 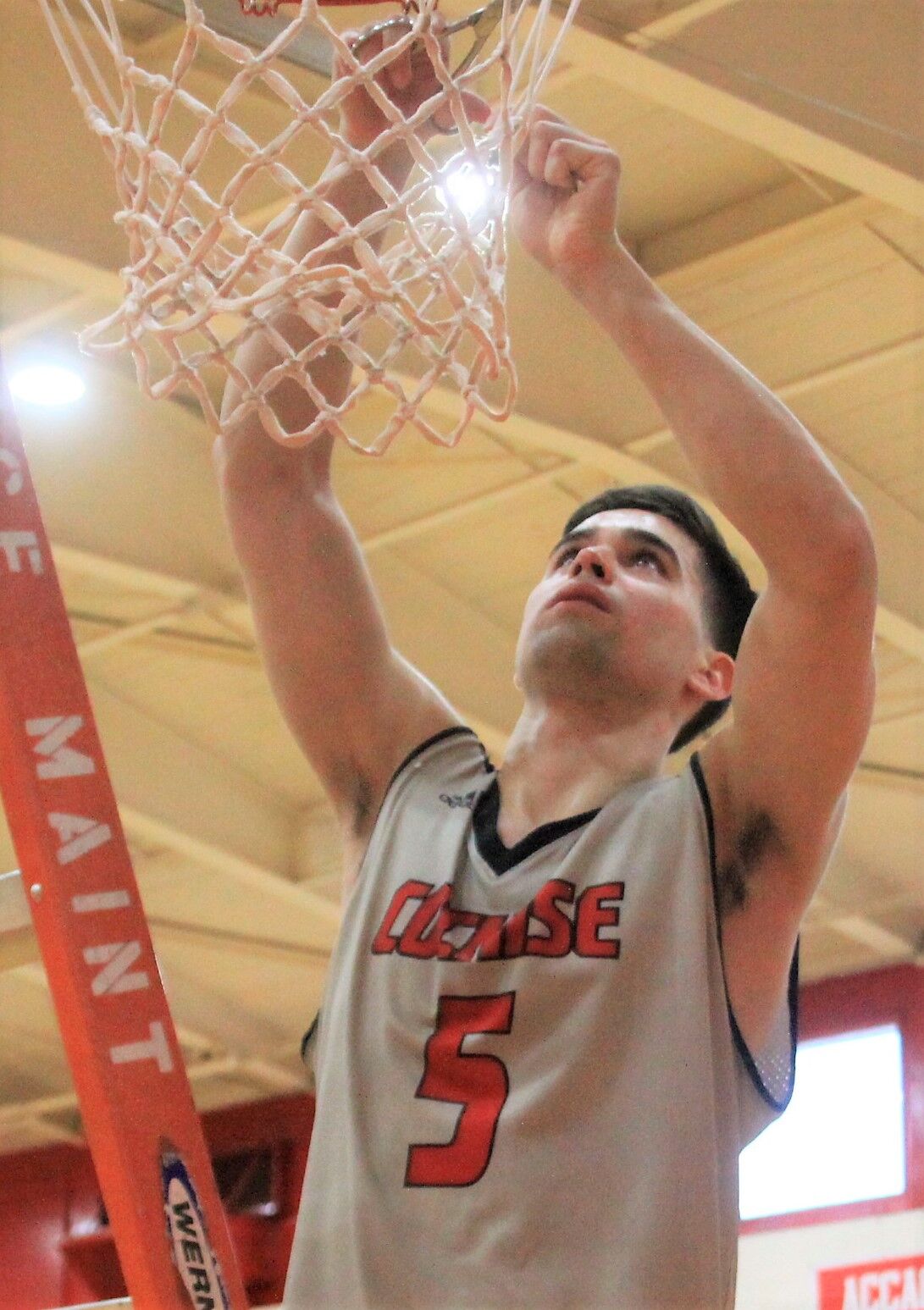 Brian Rios, the Most Valuable Player in the championship game with Arizona Western, cuts down a piece of the net Saturday. 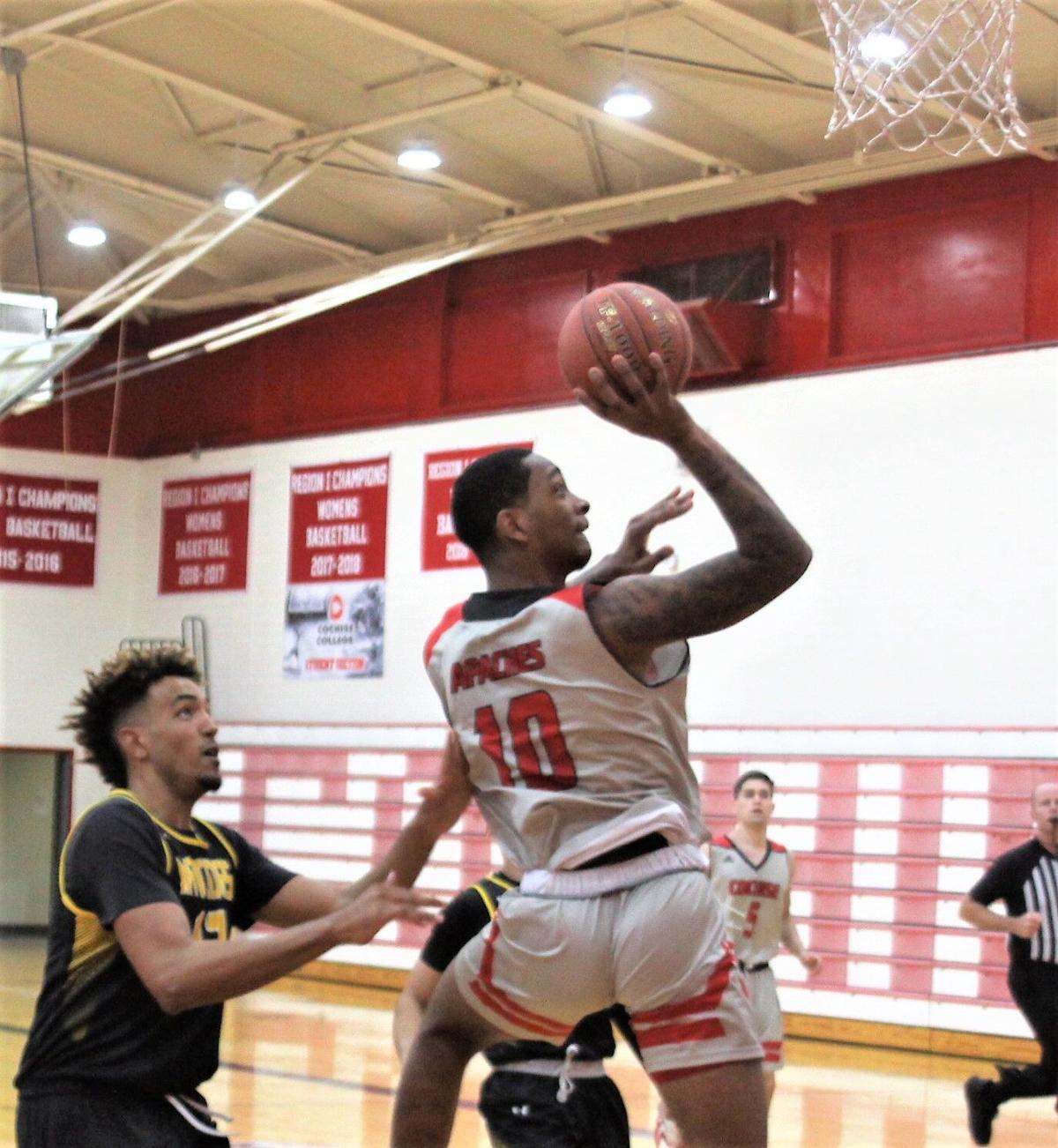 Cochise College's Stephen Byard puts up a shot in the first half. 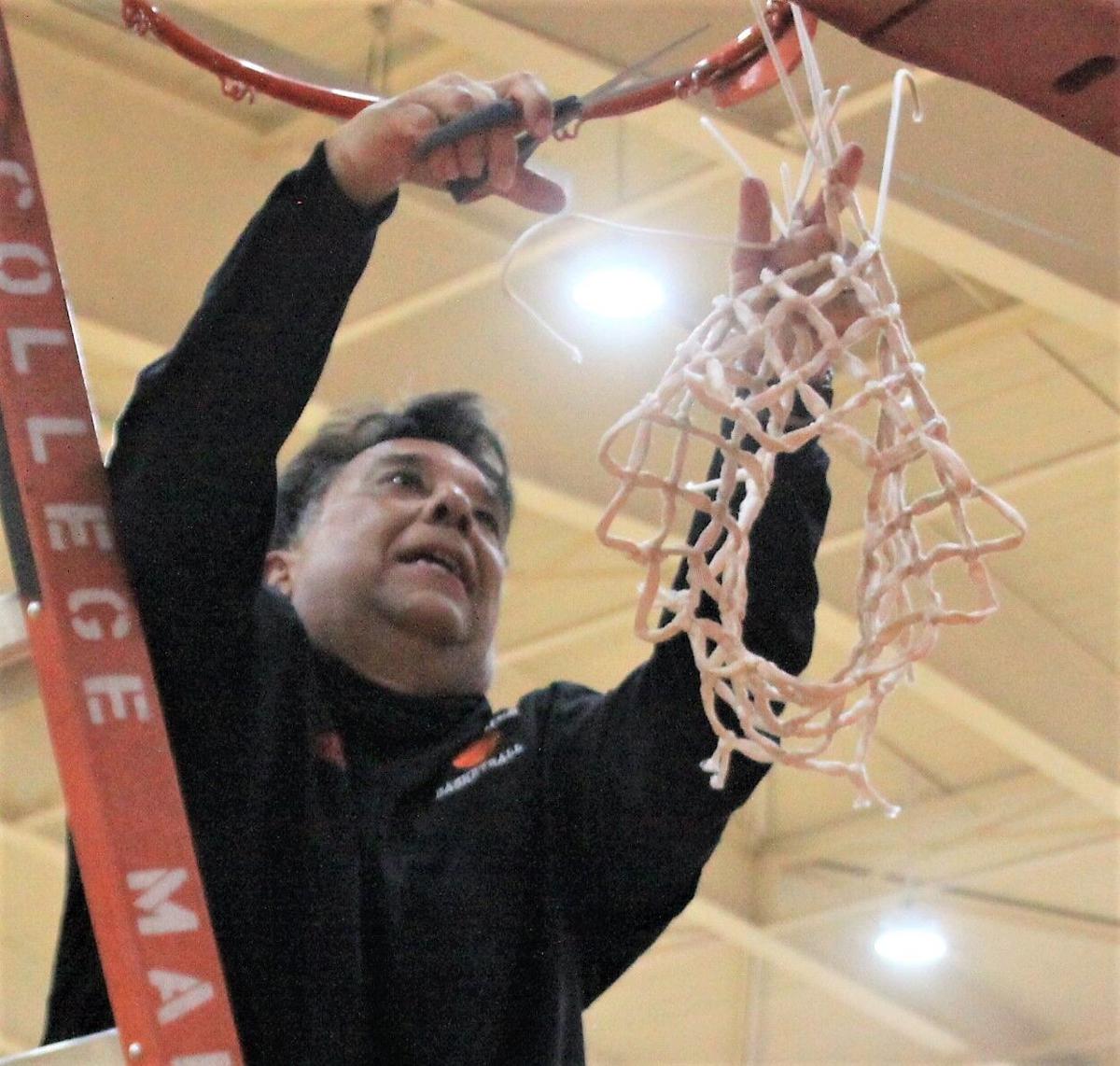 Jerry Carrillo, head coach of the Apaches who earlier in the week was named the Region 1 co-Coach of the Year cuts down the final strings of the net Saturday.

Brian Rios, the Most Valuable Player in the championship game with Arizona Western, cuts down a piece of the net Saturday.

Cochise College's Stephen Byard puts up a shot in the first half.

Jerry Carrillo, head coach of the Apaches who earlier in the week was named the Region 1 co-Coach of the Year cuts down the final strings of the net Saturday.

DOUGLAS — The Cochise College men’s basketball team is headed back to the NJCAA national tournament in Hutchinson, Kansas.

On Sunday Cochise College was informed it had received the 20th seed in the 24 team tournament and will face 13th-seeded Ranger College (19-4) of Ranger, Texas, April 19 at 5:30 p.m. in the first round of the tournament which will take place April 19-24.

The Apaches punched their ticket Saturday afternoon when they smacked the Arizona Western College Matadors 83-62, winning the Region 1 and Western District championship inside an empty Cochise Stronghold Gymnasium.

Fans were not allowed to attend Cochise College athletic events this year due to COVID-19 protocol.

March 2015 was the last time the Apaches made an appearance at the NJCAA national tournament. That year they fell 90-60 in the first round to a Vincennes College team that had been beaten once prior to the tournament.

Saturday’s matchup with Western was the third time the two teams had met this year, each winning once prior on its home court. Two other games that had been scheduled were canceled due to COVID-19 related issues.

Brian Rios, who was selected the Player of the Game and Stephan Byard, who earlier in the week was named the Region 1 Player of the Year, each pumped in 18 points to lead the Apaches in scoring while Jonathan Garcia came off the bench to score 16.

Saturday’s game was close at times, especially in the first half when Cochise would see a one-point lead increase to nine and then shrink to three before leading 40-35 at the half.

In the second half Arizona Western cut the lead to 45-44 only to see Cochise score 13 straight points for an 58-44 lead.

Rios’ 3 with 10:32 remaining in the game would give the Apaches a 61-45 lead, their largest of the game until the sophomore guard nailed another 3-pointer with just over two minutes remaining giving Cochise a comfortable 80-59 edge.

“This is great because of all the adversity we went through because of COVID,” said Apaches coach Jerry Carrillo. “I’m really proud of these guys.”

Rios said going into the championship game the focus was execution.

“We felt going in we were prepared, it was just a matter of executing,” he said. “This has definitely been a different year but being able to play and win a championship is very rewarding. I’m very grateful and beyond blessed to be playing with these guys.”

He said going to nationals is a thrill and he’s approaching it with the mindset that he’s going to enjoy the experience while also knowing his team has a job to do — bring home a championship.