Benson hurdler Trinty Foy is one of several runners to clear a hurdle in the 100-meter hurdles Saturday at the Safford Rotary Invitational. 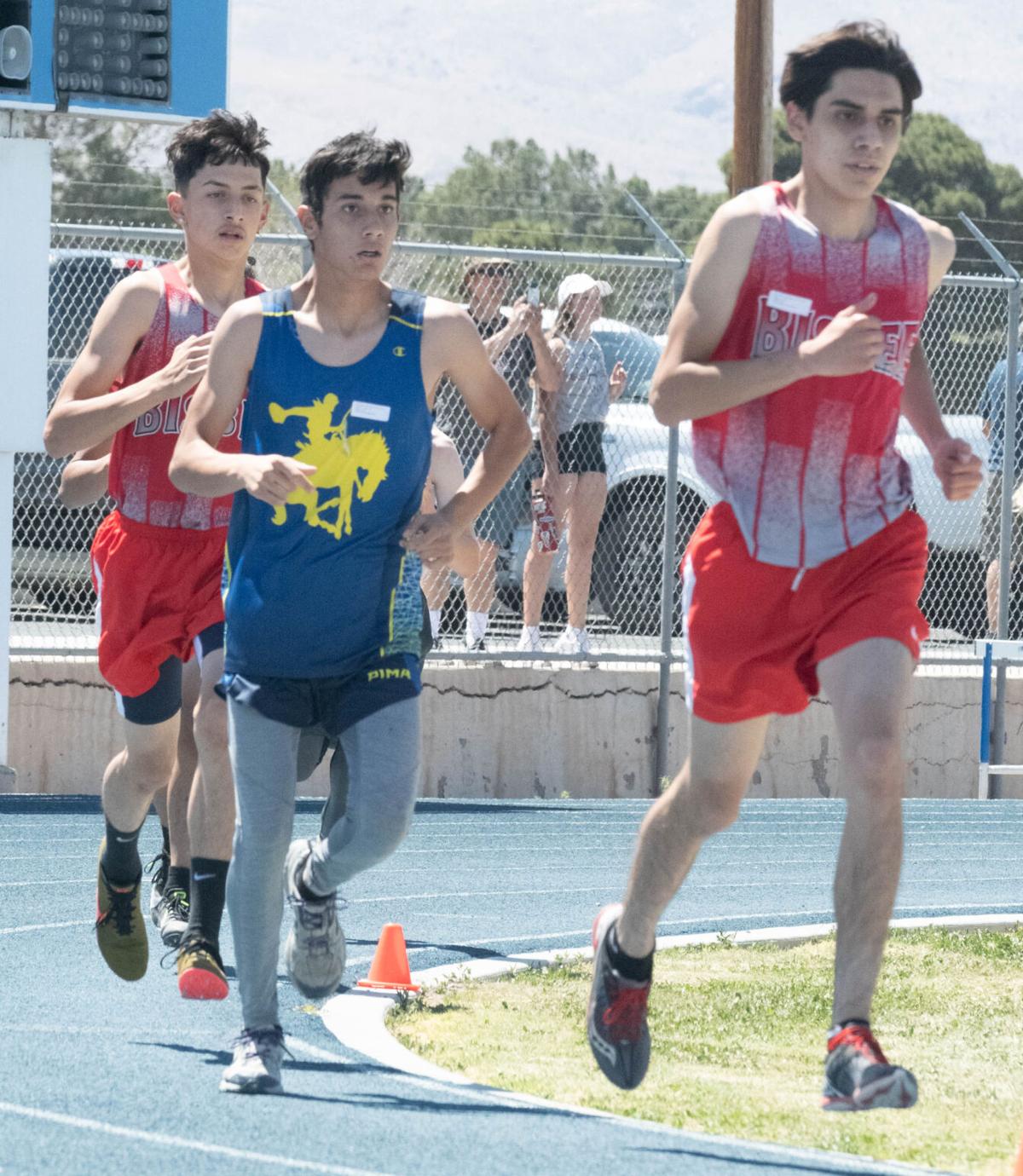 Benson hurdler Trinty Foy is one of several runners to clear a hurdle in the 100-meter hurdles Saturday at the Safford Rotary Invitational.

Area team places in the boys invitational were Benson third with 75 points, Bisbee seventh with 50, Douglas 11th with 23, St. David 13th with 15, Valley Union 16th with seven, and Tombstone 17th with five.

Places for the area girls teams in the invitational were Benson sixth with 48.5 points, St. David seventh with 31.5, Tombstone eighth with 31, Douglas ninth with 25, Willcox 11th with 20, and Bisbee 13th with 12 points.

“I couldn’t be more impressed with our athletes’ efforts at the Safford Rotary Invitational,” Benson coach Randy Barney said. “Many of them achieved personal records. It was a good meet. Now we’re looking forward to our home invitational this Saturday.”

Placing for the Bisbee boys were junior Geoffrey Gribble first in the 100, first in the 200 and third in the 400; sophomore Ramon Loya first in the 3,200 and fifth in the 1,600; and junior Edward Holly first in the shot put.

“All of our athletes did an excellent job,” Bisbee coach Walt Edge said. “We only have a few athletes but those we do have are doing really well. They’re top notch!”

Placing for the Douglas boys were senior Luis Felix third in the triple jump and fourth in the long jump; senior Francisco Parra fourth in the shot put, sixth in the discus and sixth in the javelin; and the 4x800 team of senior Isaac Rivera, junior Juan Valenzuela, freshman Roberto Elias and junior Ramon Hernandez finished eighth.

Placing for the Douglas girls were junior Litzy Leyva first in the high jump, second in the triple jump and eighth in the long jump; senior Stephanie Amaya eighth in the pole vault; and the 4x100 team of junior Venecia Torrez, senior Clarissa Jaramillo, junior Ashley Galaz and Amaya finished fourth.

“This was our first invitational of the season,” Douglas coach Donna Savill said. “With four weeks left in the season, our goal is to have all of our athletes stay healthy to be able to qualify for state. We are also looking forward to holding our 90th Annual Ted James Track and Field Invitational on April 24. We are very proud to be hosting the oldest annual high school track and field invitational in Arizona.”

Placing for the St. David girls were senior Sydney Klump second in the 400, second in the javelin and third in the high jump; junior Alana Jones seventh in the shot put; freshman Anissa Jacquez sixth in the javelin; and the 4x400 team of sophomore Treyleigh Bliss, senior Kayla Judd, Jacquez and Klump fifth.

“We had a good, productive meet,” St. David coach Seneca Richardson said. “Quite a few of our athletes achieved personal records. Congratulations to Sydney Klump for earning the ‘high point’ female athlete of the meet award.”

“Everyone did something well at the Safford Rotary Invitational with several of our athletes getting personal bests,” Tombstone coach Jake Winslow said. “Our girls were exceptionally competitive in their events.”

Placing for the Valley Union boys were sophomore Will Smith and sophomore Cody Pena, tied for fifth in the high jump; and sophomore Kolby Gilbreth eighth in the pole vault.

“This was a huge meet,” Valley Union coach Alysha Elmer said. “We did well for going against so many athletes.”

Placing for the Willcox girls were sophomore Maylee Thompson third in the long jump, fourth in the 100 and fifth in the 400; and the 4x800 team of Thompson, sophomore Yuliana Reyes, junior Jozlyn Morema, and junior Arleene Montano fourth.

“Our overall team performances are getting better,” Willcox coach Craig Hamilton said. “We had many personal bests in the meet.”