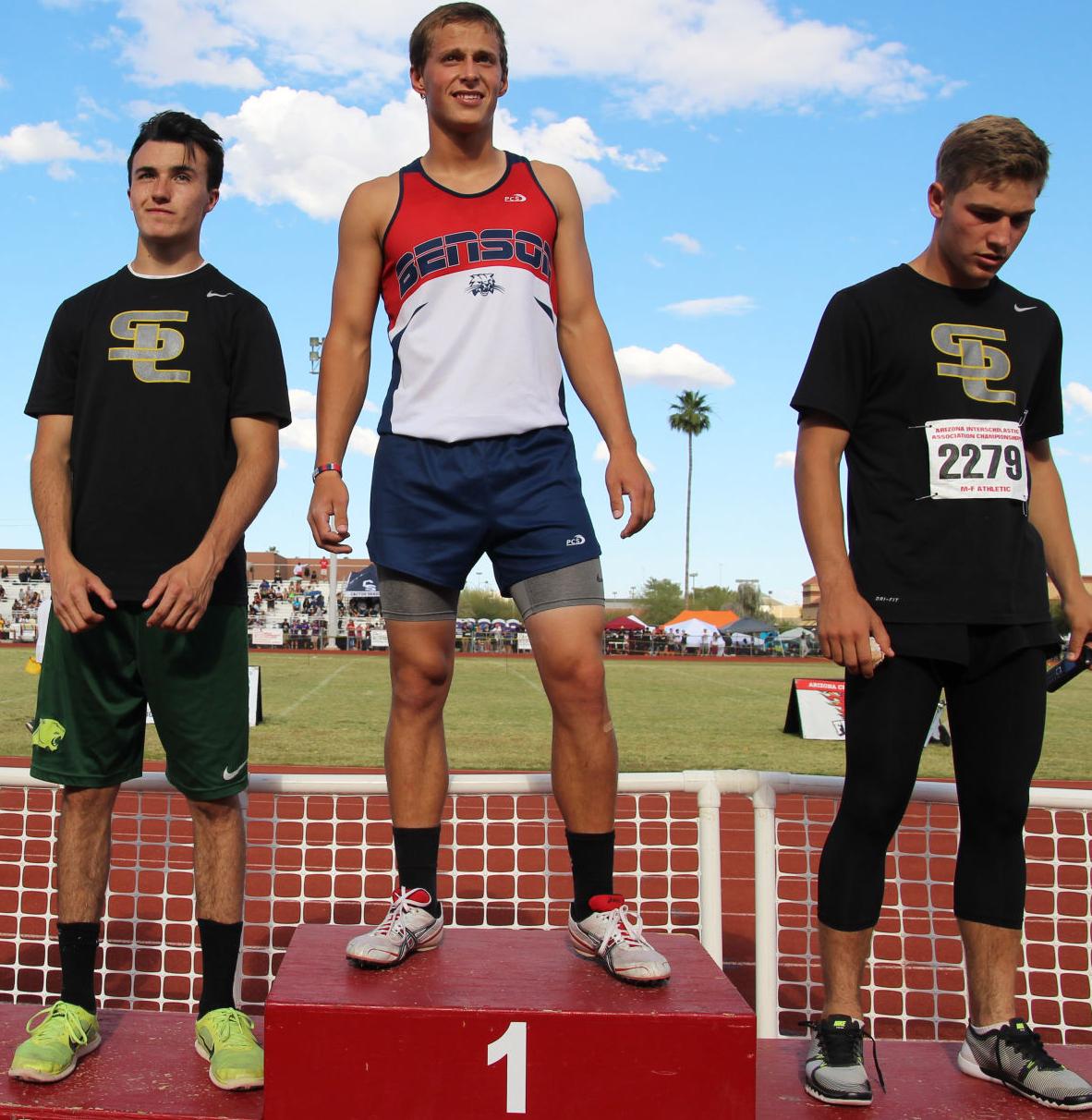 Lofton Thomas, middle, capped his senior season with a leap of 14-feet, 9-inches to win the state pole vault title in 2016. 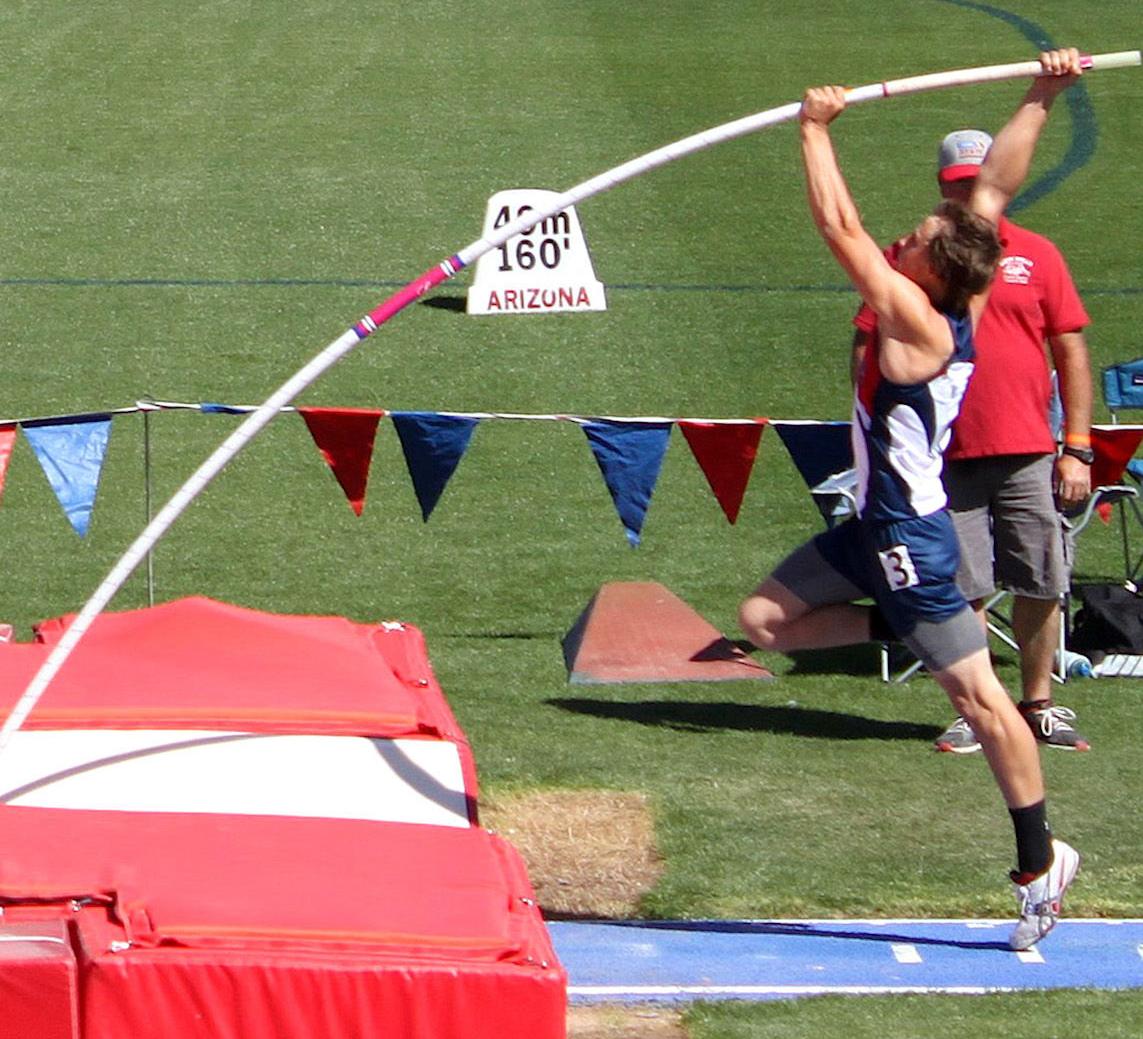 Lofton Thomas vaulted a school record 15-6 at the 2016 Arizona Meet of Champions.

Lofton Thomas, middle, capped his senior season with a leap of 14-feet, 9-inches to win the state pole vault title in 2016.

Lofton Thomas vaulted a school record 15-6 at the 2016 Arizona Meet of Champions.

BENSON — Growing up Lofton Thomas would watch his siblings sore over the pole vault bar from the stands. When it was his turn to join the track and field team it was only fitting Thomas would take up pole vaulting.

“As the youngest in my family, I look up to my older brothers and my sister,” Thomas said. “I not only looked to them for support in track and field but for the challenge of being the best in pole vault. They are always there for me.”

Going into his senior season at Benson High School, the one goal Thomas continually hoped to achieve was breaking the boys’ pole vault record that stood at 15’1”, which was set by Eddie Lee in 1980. Thomas had competed well in his final season, winning meets and improving his personal record as the year progressed. He eventually took the Arizona Interscholastic Association state 2A pole vault title with a vault of 14’9”. With only one meet left in his high school career, his record-breaking goal was on the line. In his final high school competition, the 2016 Meet of Champions, would be the one to put him over the top – vaulting 15’6” to break the school’s 36-year-old record.

“Lofton was a man on a mission,” his Benson High School pole vaulting coach Randy Barney said. “He set a goal to break our school record and did what it took to do it. He studied the sport and trained hard, preparing his body and his technique to accomplish this great feat. He also spent many hours outside of the season at camps and training.

He had great support from his family. His oldest brother Ashton vaulted when we re-started our vaulting program. Sheldon was next — he was a very consistent vaulter who really understood technique. His sister Alysha was small, powerful, and determined – tying teammate Rhiannon Reece for our girls’ school pole vault record at 10’9”. I feel very blessed to have shared such a great sport with such a remarkable family”

Thomas knew he wanted to continue his vaulting career but he had another goal in mind before he could accomplish it: going on a mission for his church. After graduation in May, Thomas left for Mexico in December 2016 to serve a two-year mission in Mexico City for the Church of Jesus Christ of Latter Day Saints.

He returned to Benson from his mission in December 2018. With the support and encouragement of his family, he enrolled in Mesa Community College and joined their track and field team. The same team his sister had competed in pole vault for after she had graduated from Benson. Even though he had not vaulted in over two years, the technique quickly came back to him through dedication and hard work.

“I’ll always remember my first college meet,” Thomas said. “I hadn’t competed in the pole vault in over two years and I simply fell back in love with track and field (and) with pole vaulting.”

The hard work and dedication he put into his chosen event paid off when he competed in the junior college nationals and finished seventh overall in the pole vault at the end of his 2019-20 indoor season.

In addition to working hard in pole vault, Thomas works hard during his summer breaks as a Hot Shot firefighter stationed out of Fort Huachuca.

“Firefighting pushes you to your physical limits,” he said. “Firefighters work together as a family. We always have each other’s backs.”

Recently Lofton and the Hot Shot crew he works with assisted with the Big Horn Fire.

“It’s hard work but it is definitely rewarding, definitely satisfying,” he said.

Thomas will be leaving his Hot Shot crew in the fall and returning to Mesa Community College where he is majoring in Pre-Med and minoring in science. After MCC, he sees himself at a Division 1 or Division 2 college working towards a degree in medicine. This collegiate future also has him in track and field and pole vaulting.

“Shannon and I are so proud of all of all four of our children, that they were able to push themselves during their track & field seasons and in life,” Thomas’ mother Jennifer Thomas said. “Lofton was able to compete and push himself after watching his siblings and with great coaches along the way. We have enjoyed watching all of them compete.”