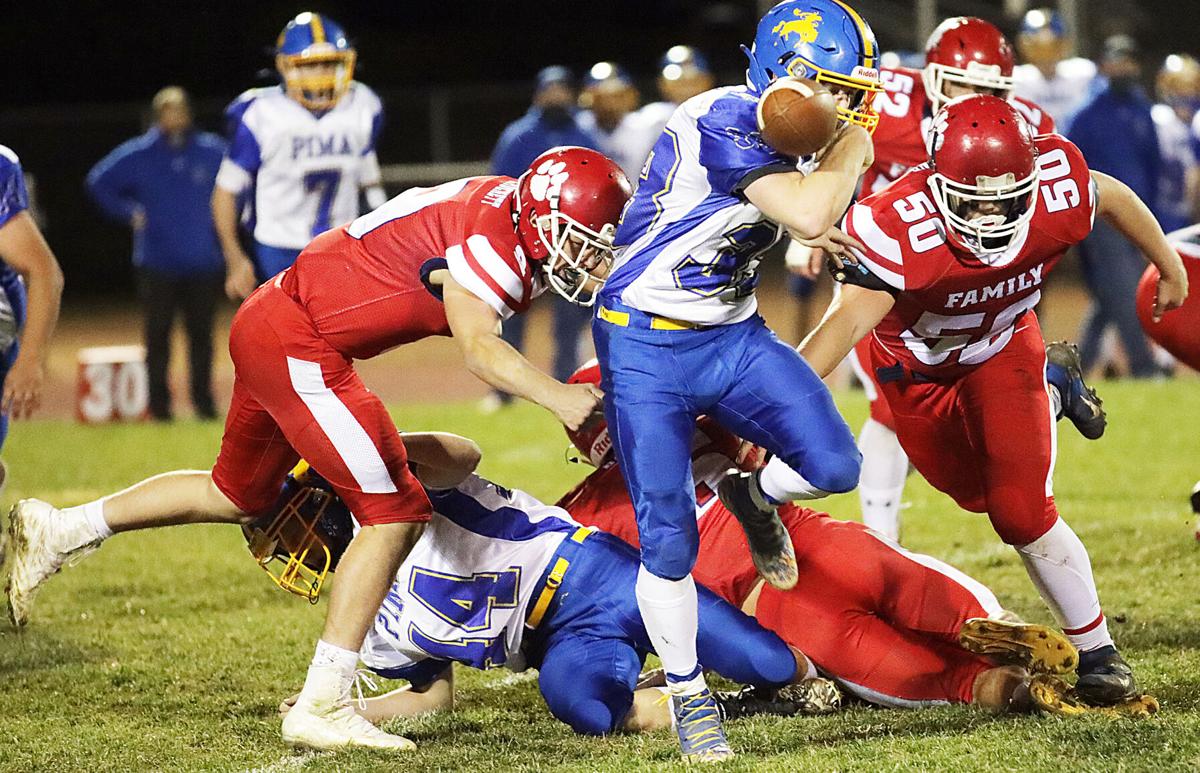 The Bobcats defense closes in on a Pima runner, causing a fumble, which Benson recovered and ran in for its first touchdown Friday. 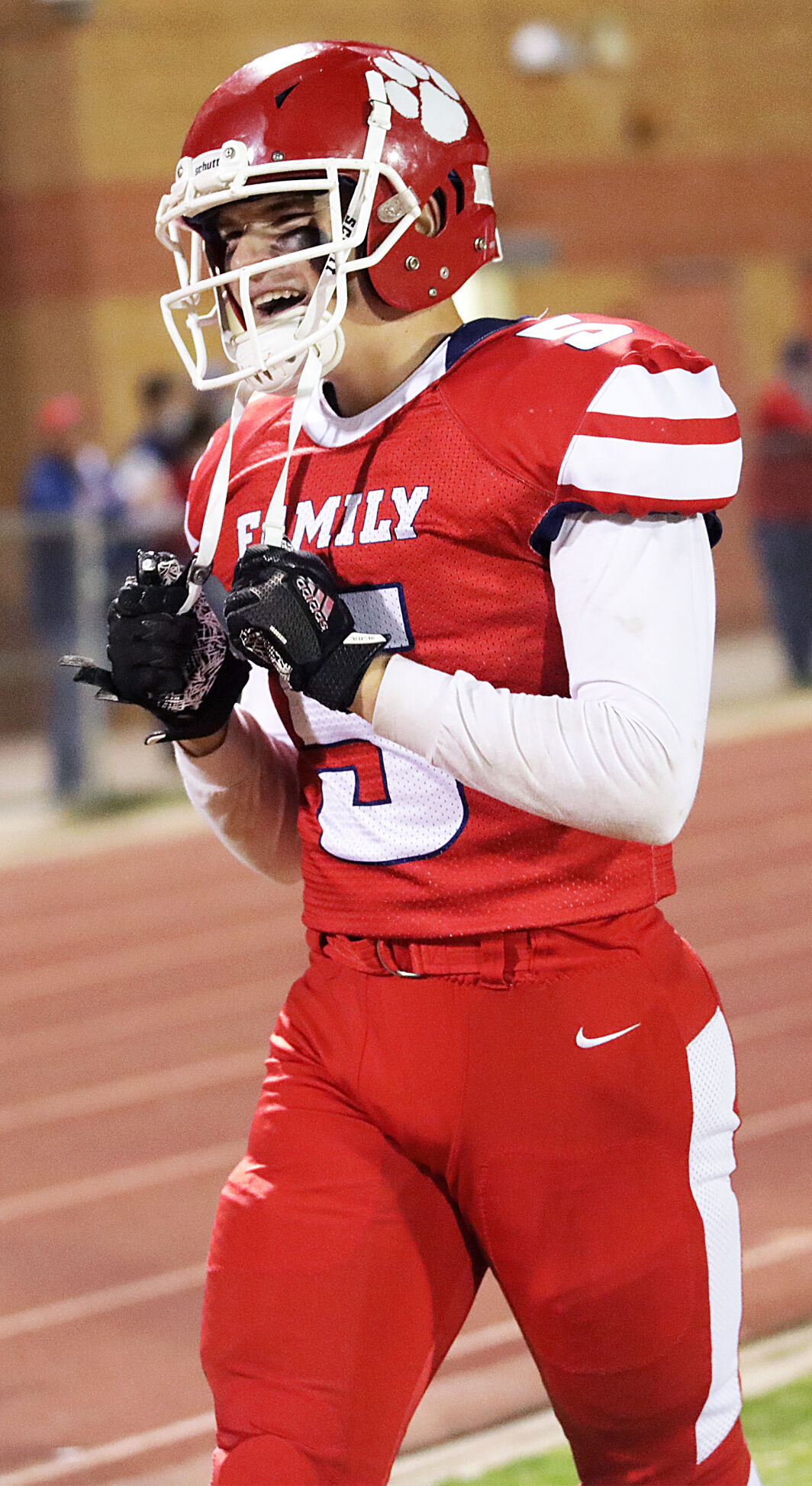 Benson junior defensive end Wyatt Wilharm is all smiles after ripping the ball away from a Pima runner then returning  for a touchdown during Friday’s playoff game at home. 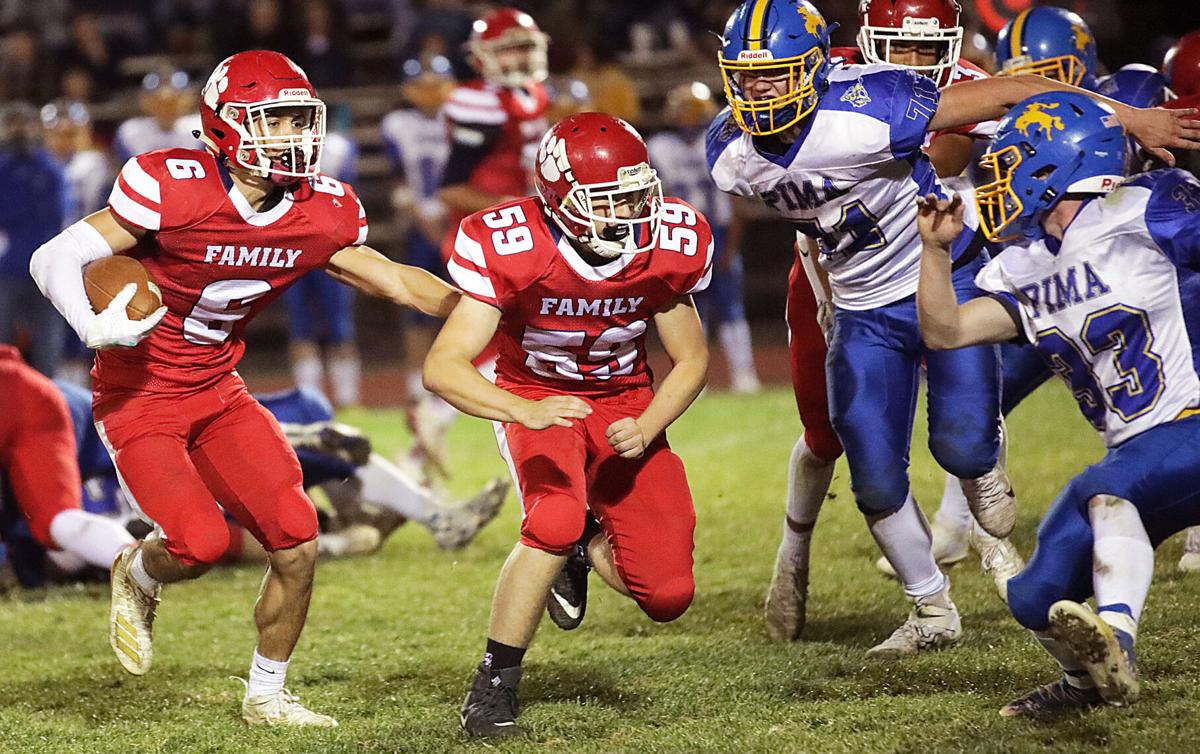 Bobcats junior running back Devin Bowling uses his blockers as he looks for a hole in the Roughriders defense.

The Bobcats defense closes in on a Pima runner, causing a fumble, which Benson recovered and ran in for its first touchdown Friday.

Benson junior defensive end Wyatt Wilharm is all smiles after ripping the ball away from a Pima runner then returning  for a touchdown during Friday’s playoff game at home.

Bobcats junior running back Devin Bowling uses his blockers as he looks for a hole in the Roughriders defense.

BENSON — The Benson Bobcats advanced to the first round of the state tournament with a 28-7 play-in victory over Pima High School.

Saturday morning the Arizona Interscholastic Association announced the final eight teams for the playoffs, which begins Friday. Benson is ranked the No. 1 team in the 2A and will host No. 8 Morenci at 7 p.m.

These teams played Oct. 30 in a region game at Morenci. Benson defeated the then 2-0 Wildcats 12-6.

“I would have rather played someone we haven’t played before,” Determan said. “They belong in the top eight. At the end of the day it’s the top eight and we have to show up.”

Benson’s defense carried the team Friday night, causing three turnovers, and held Pima without a point until the final seven seconds of the game. Mundo Esparza opened the scoring for Benson with a 40-yard fumble return for a touchdown. A big hit by the Bobcats on the Roughrider ball carrier forced the ball loose and Esparza scooped it up. Angel Rigney knocked the point after attempt through the uprights to give the home team a 7-0 lead with 5:23 left in the first quarter.

Twenty seconds later, the Bobcats added to their lead. Wyatt Wilharm returned a Pima fumble 40 yards for the touchdown. Rigney’s extra point was good to make the score 14-0, which the Bobcats carried through the remainder of the first quarter.

Midway through the second quarter the Benson special teams unit got a finger on a Pima punt to give Benson good field position. A helmet-to-helmet penalty on the return against the Roughriders put the Bobcats at the Roughriders’ 40-yard line. Devin Bowling capped the Benson drive with a 1-yard touchdown run with 4:40 left in the half. Rigney’s extra point made it 21-0. With 25 seconds left in the half, Gabe Osuna scored on a short run to add to th’ lead. Rigney’s point after attempt gave the home team a 28-0 lead that they carried into halftime.

The third quarter was sloppy for both teams. Esparza and Jimmy Lerblance had interceptions for Benson. Pima recovered one Benson fumble but couldn’t capitalize. Benson maintained the 28-0 lead through the third quarter.

The sloppiness continued in the final quarter with more turnovers and little offensive momentum. Pima scored on a 6-yard pass from Kaleb Blair to Grant Ashby. The point after made the final score 28-7.

Determan knows his team will have to clean up mistakes in order to make a run in the shortened postseason.