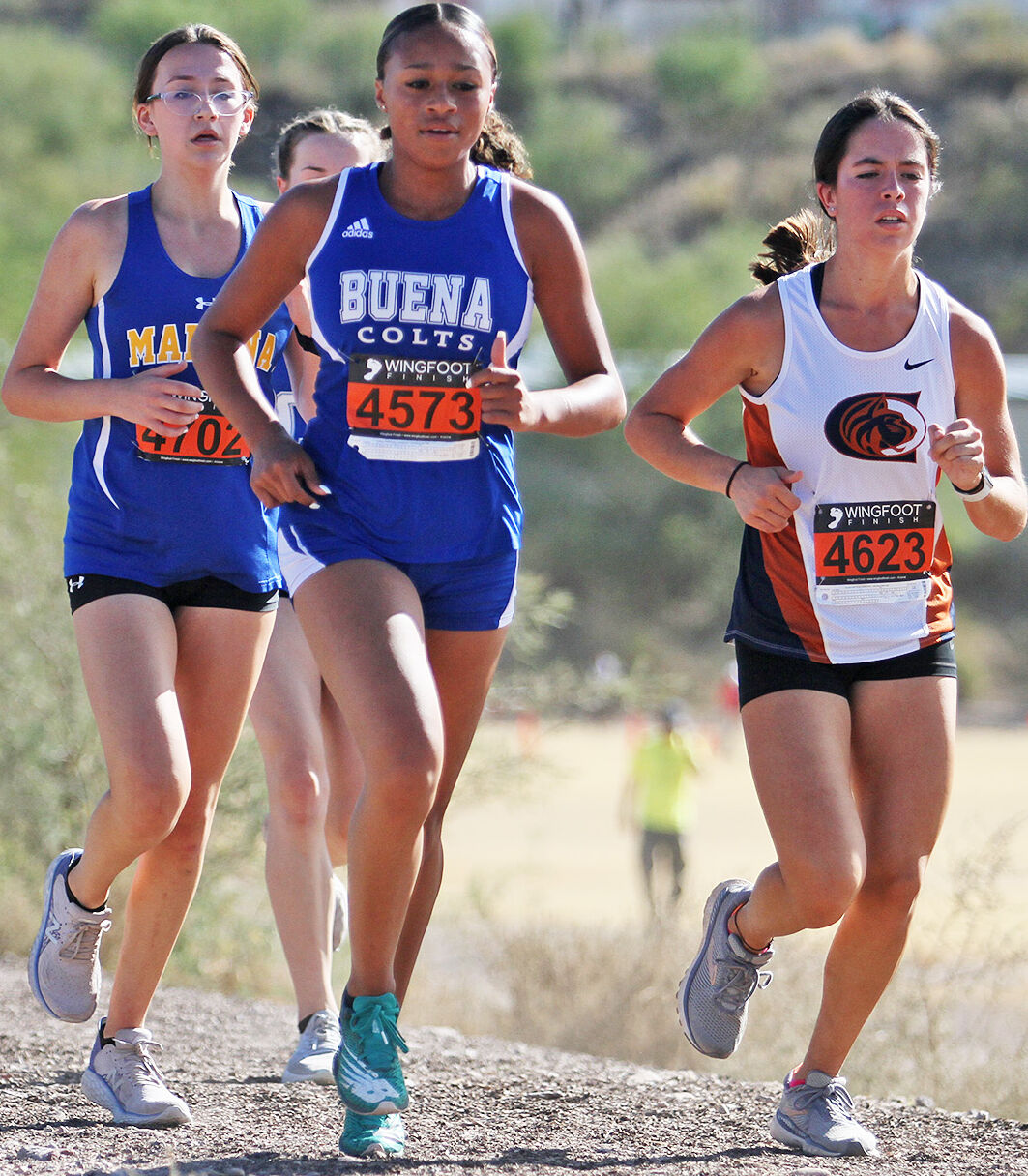 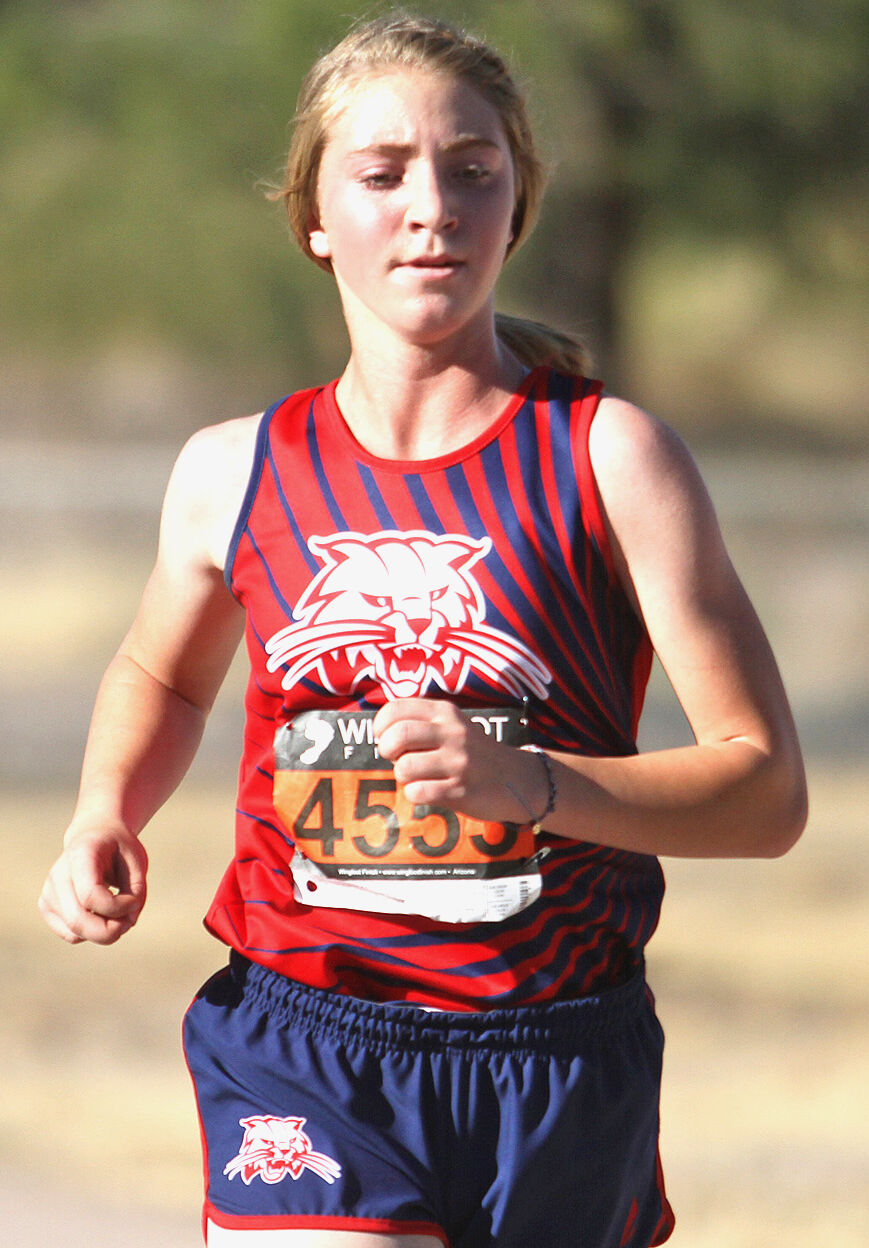 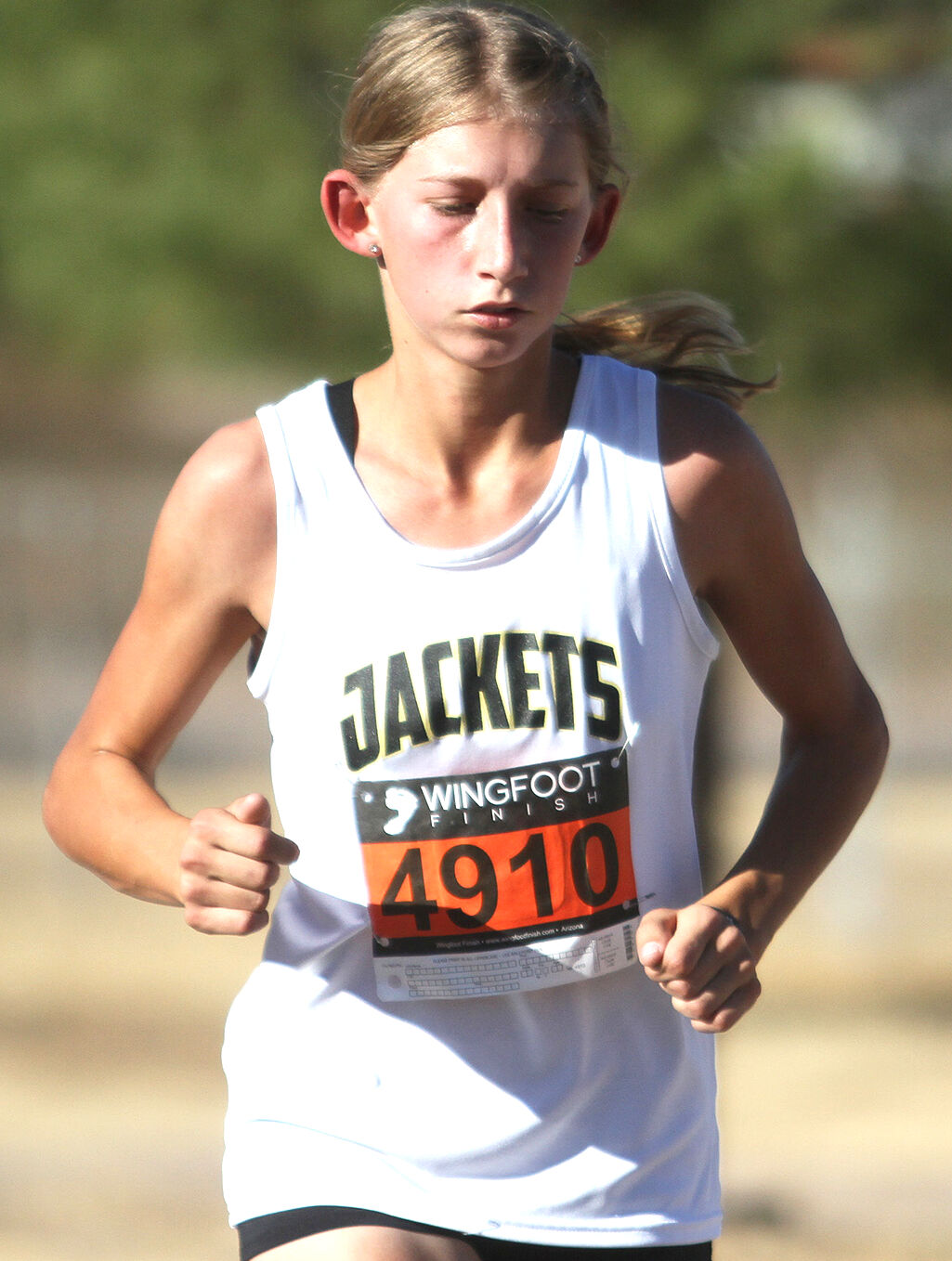 Taylor Jundt finished with a time of 23:43.2 to punch a ticket to the state meet.

Taylor Jundt finished with a time of 23:43.2 to punch a ticket to the state meet.

COUNTY — Cochise County cross-country teams competed in the sectional race Wednesday at Rio Rico with the goal of qualifying for state.

Buena competed in the Division 2 boys and girls race. Sam Roark finished 14th with a time of 19:03. The sophomore is the lone Buena boys to qualify for the state meet. The Colts had three girls qualify: Kaila Hart 10th; Amiya Matthews 14th; and Sarah Pedersen 16th.

Jenally Barco will represent the Douglas Bulldogs at the state meet. She finished 12th in the Division 3 race on Wednesday.

The Benson girls finished second in the region, advancing all seven team members to the state competition. Team scores for the girls were Pusch Ridge Christian Academy in first with 32 points followed by Benson with 41 and Morenci with 55. Pusch Ridge and Benson teams are advancing to state. Medals were given to the top 15 finishers.

“Our girls have a great team,” Benson High School cross-country coach Randy Barney said. “They are wonderful athletes with a lot of character who have trained very hard all season.”

The Bobcat boys finished third overall as a team. Teams competing were: Pusch Ridge Christian Academy took the title with 25 points followed by St. Augustine with 66, Benson with 88, Bisbee with 92, Morenci with 104 and Tombstone with 128. Pusch Ridge and St. Augustine teams are advancing to state. Medals were given to the top 15 finishers.

“I’m super proud of our boys’ team, they ran spectacular,” Barney said. “These athletes have been training hard all season and have grown in both conditioning and in character.”

The Bisbee Puma boys will be taking two athletes to the state championships, sophomore Ramon Loya who finished second overall with a time of 19:24 and sophomore Jesus Moreno who finished with a 21:19.7.

“Our athletes gave it all they had,” Bisbee cross-country coach Armando Ballesteros said. “They had great attitudes all season, at practices and in meets. We definitely had a 100 percent successful season.”

The St. David Tigers will have one athlete competing in the state championship meet, senior Elijah Schmidt who ran a 20:14.8.

“This is Elijah’s second year in cross country and it will be his first year competing at state,” St. David cross-country coach Richard Jones said. “I’m happy that Elijah qualified and I’m proud of all of our athletes for their dedication and hard work during the season.”

The Tombstone Yellow Jackets have two girls who qualified for the state meet, freshman Reagan McGuire finished fifth with a 23:01.9 and sophomore Taylor Jundt who finished with a 23:43.2.

“All of our athletes ran an intelligent, gritty race,” Tombstone cross-country coach Jake Winslow said. “This is Reagan and Taylor’s first year in high school cross country. I’m happy that they both made it to state.”

“Our athletes worked hard all season during practices and meets,” Willcox cross country coach Craig Hamilton said. “They all completed well at regionals. We ended our season seeing improvements in every meet.”

The Division 2 and 4 state championship cross country meets will be on Nov. 13 at Cross Roads Park in Gilbert. Barco will compete on Nov. 12.