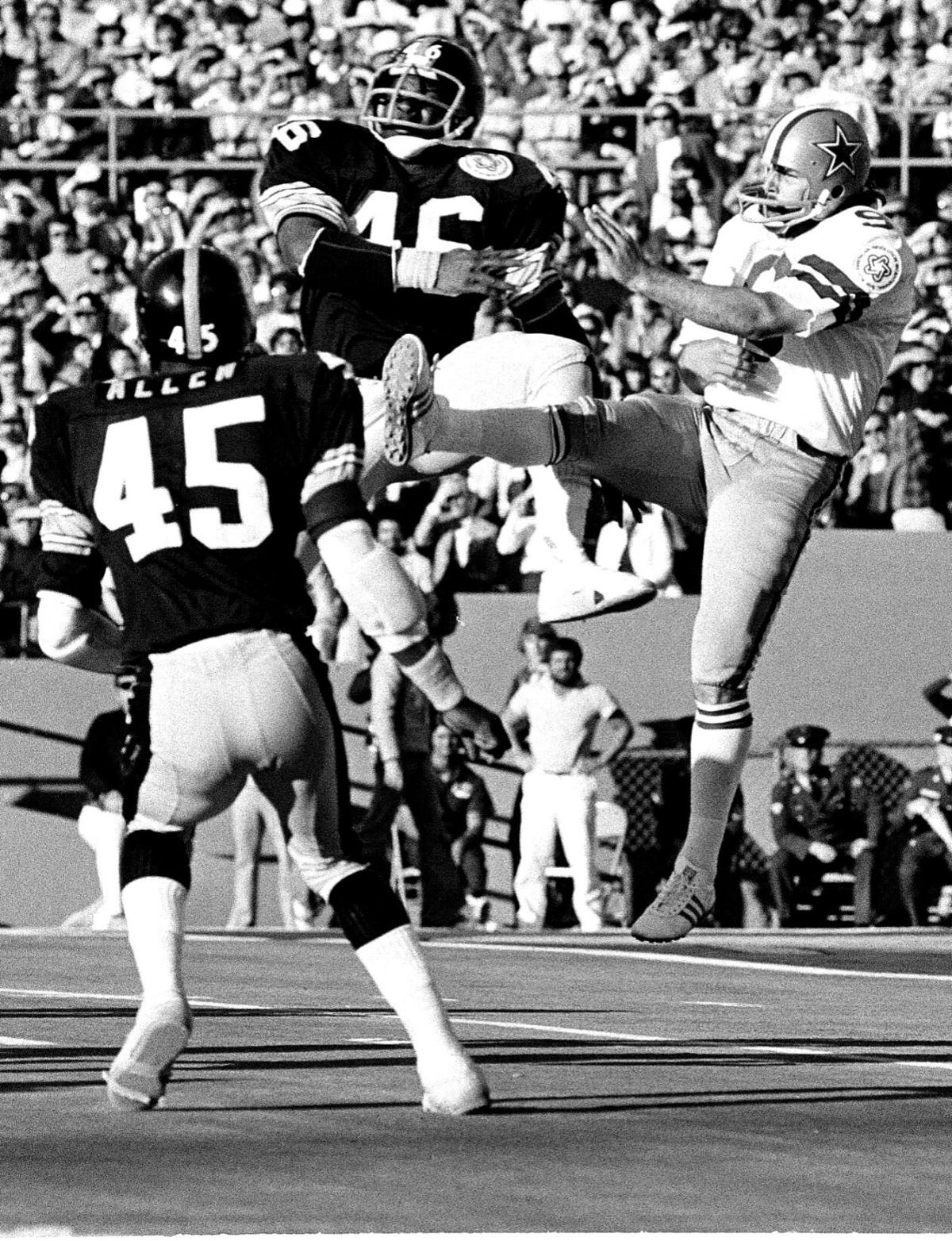 Mitch Hoopes was drafted by the Dallas Cowboys in 1975 after graduating from the University of Arizona. 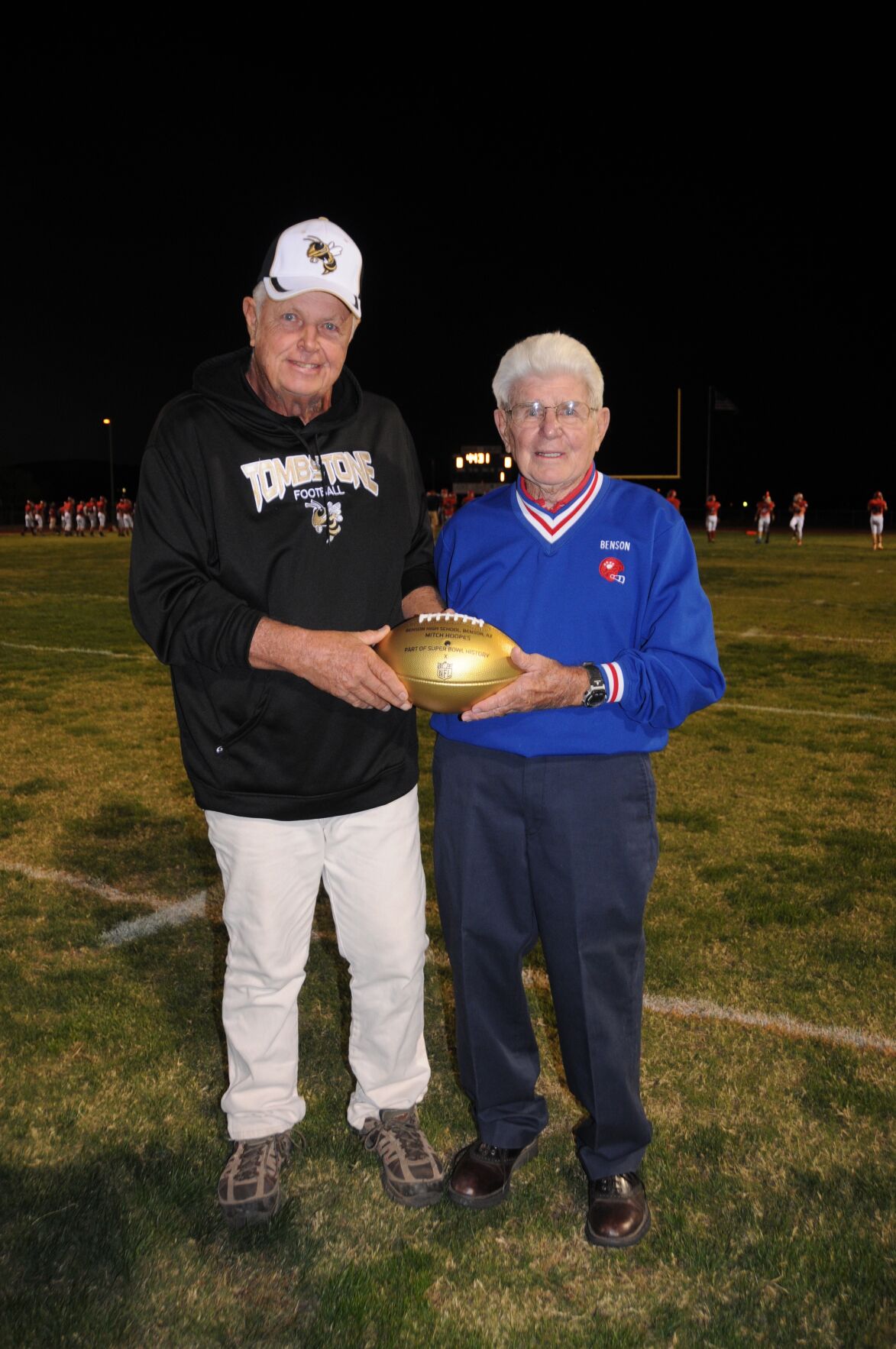 Mitch Hoopes was drafted by the Dallas Cowboys in 1975 after graduating from the University of Arizona.

Hoopes, who passed away on Aug. 11 in California at the age of 67, was one of those standout athletes whose legacy is still remembered in Benson. He was born in Bisbee but competed in football, basketball and baseball as a Benson Bobcat. It was his junior year playing football, however, that made all the difference when one of his Benson coaches pulled him aside to show him how to punt.

“We had a big game coming up against Hayden when I noticed before a practice that Coach Jack Wilson was showing Mitch how to punt,” Mitch’s high school varsity football coach Mike Hayhurst said. “Having him punt against Hayden made all the difference; he punted over 8 times in that game. I’d say we definitely won the punting game and we went on to win the game. He became our punter.”

In addition to punting, Mitch was the teams running back.

“He was a super strong football player,” Hayhurst said.

Football was not the only sport Mitch excelled in.

“Mitch was a good basketball player,” one of his high school basketball coaches Max Valkingburg said. “He never saw a bad shot. Even when he missed he still had the confidence to keep shooting – he was always one of our top scoring players.”

The Bobcats went on to take the 1971 2A state basketball championship, with a 75-59 victory over Wickenburg, Hoopes’ senior year.

But it was not just his ability on the field or on the court that stood out to his coaches. It was also his humble attitude.

“He was always quick to give credit to his teammates for their efforts in the games even if he was the top scorer. His sportsmanship really impressed me,” Valkingburg said.

Hoopes’ athletic efforts in high school would pay off as he was selected to both the basketball and football all-star games. Again, as fate would have it, the University of Arizona punting coach would be in attendance at the High School All-Star football game at Northern Arizona University in Flagstaff the summer after his senior year.

Hoopes played all four years for the University of Arizona Wildcats football team and after graduating in 1975 he was drafted by the Dallas Cowboys.

“To make it as a 1975-76 wildcard team and possibly make the Super Bowl, the Cowboys needed to beat Washington,” Valkingburg said. “Mitch had invited Coach Hayhurst and me to Dallas that weekend to watch the game. We were able to watch their practices, go into the locker room and onto the field, and had great seats for the game. The Cowboys beat Washington and eventually earned their way to the Super Bowl. Mitch treated us like royalty; it was a great weekend of football that I’ll always remember.”

The Cowboys made their third Super Bowl appearance in Super Bowl X, competing against the Pittsburgh Steelers at the Orange Bowl in Miami. The Cowboys would come up short in the game, falling to Pittsburg 21-17.

In addition to playing for the Cowboys, Hoopes competed for the San Diego Chargers, the Houston Oilers, the St. Louis Cardinals, the Detroit Lions, and the Philadelphia Eagles, and the Boston Breakers of the United States Football League.

“Playing in a Super Bowl gave Mitch the opportunity to honor his high school when Super Bowl 50 came around in the 2015-16 season,” former Benson High School athletic director Darin Giltner said. “I remember getting an email from the NFL saying that we would be part of their recognition program because Mitch Hoopes had competed in a Super Bowl. Being a high school in the Super Bowl honor roll program meant that we would be presented a ‘Golden Football’ in honor of Mitch. It was such a pleasant surprise – it was definitely not expected. I was very happy to be a small part of this honor. Not every high school had someone as talented as Mitch in their football program who was actually able to play in a Super Bowl.”

Soon after receiving the email, Hoopes contacted Darin Giltner to work out the details of the ‘Golden Football’ presentation. Hoopes was not able to make it to Benson but asked that one of his high school coaches, Valkingburg, present the football to the school.

“It meant a lot to me that Mitch chose me to represent him and this honor that Benson High School was receiving,” Valkingburg said.

The ‘Golden Football’ was presented to Benson High School during a pre-game ceremony at the Benson versus Tombstone varsity football game.

“Choosing this game to present the ball was an easy decision,” Giltner said, “We were playing Tombstone and Mitch’s high school football coach, Coach Mike Hayhurst, was now the head coach for Tombstone. Everything worked out perfectly with the school, the football program, and the coaches all being honored.”

Giving credit to others above himself was not unusual when it came to Hoopes – and his pride in Benson High School and the community he grew up in was always evident.

“He is the humblest man I have ever met, and definitely one of the best athletes,” high school teammate and friend Richard Saenz said. “He was always upbeat, always positive. When we talked he would always ask about my family and about Benson before he ever said anything about himself. Benson and its people always held a special place in his heart. He was a dear friend who will be greatly missed.”

“Mitch had a great sense of humor and a huge heart – he was just a great friend,” Carlberg said. “When he was given his ‘Golden Football’ for the NFL’s 50th Super Bowl anniversary, he brought it over to show my family. One of my grandsons who plays football asked him how mentally tough you have to be to play professional football. Mitch was so impressed that he gave him his ‘Golden Football’. We will be giving it to Mitch’s sister Rita because it’s a memory that needs to be in their family.”

Hoopes, a stand-out athlete and a good friend will be greatly missed by the Benson community he grew up in and the friends and family members he loved.

“All I know is that I was blessed to have Mitch as a friend,” Carlberg said