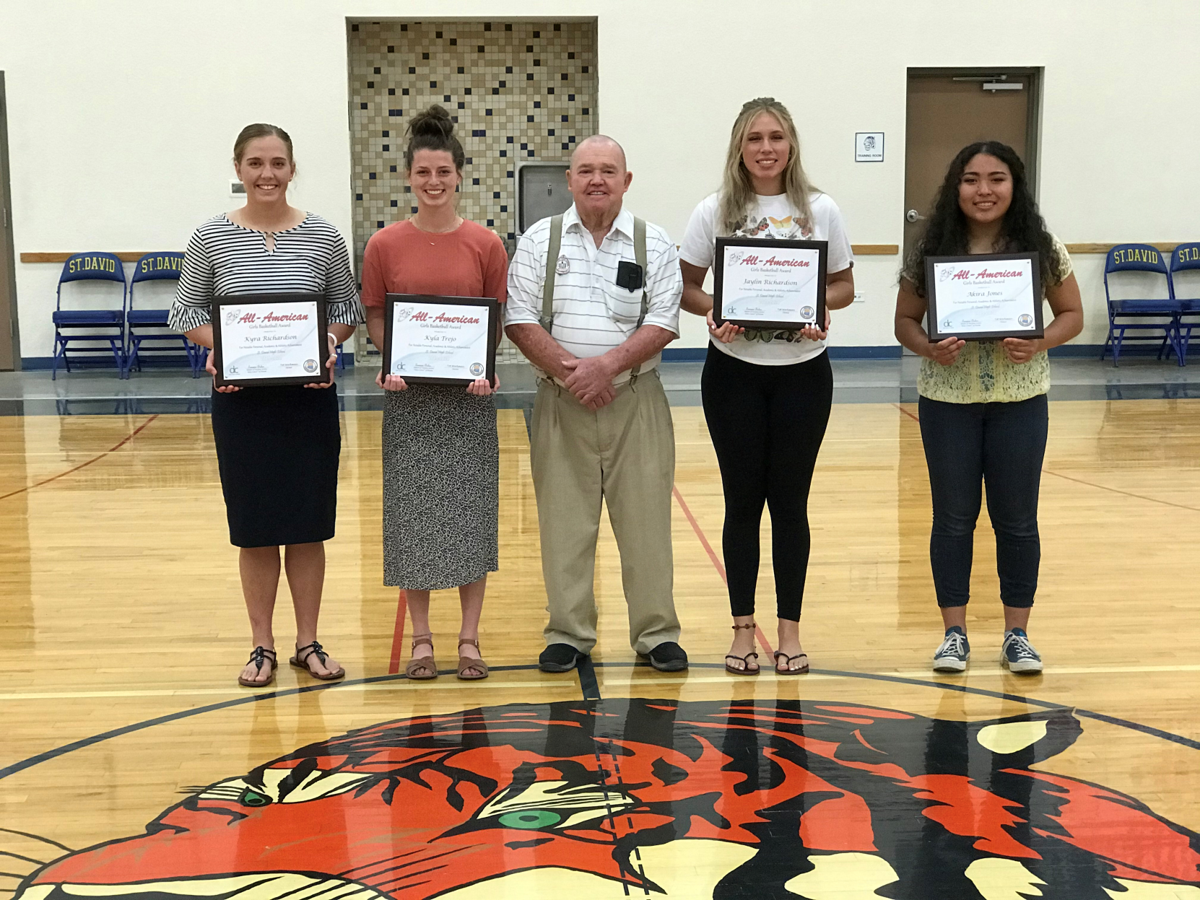 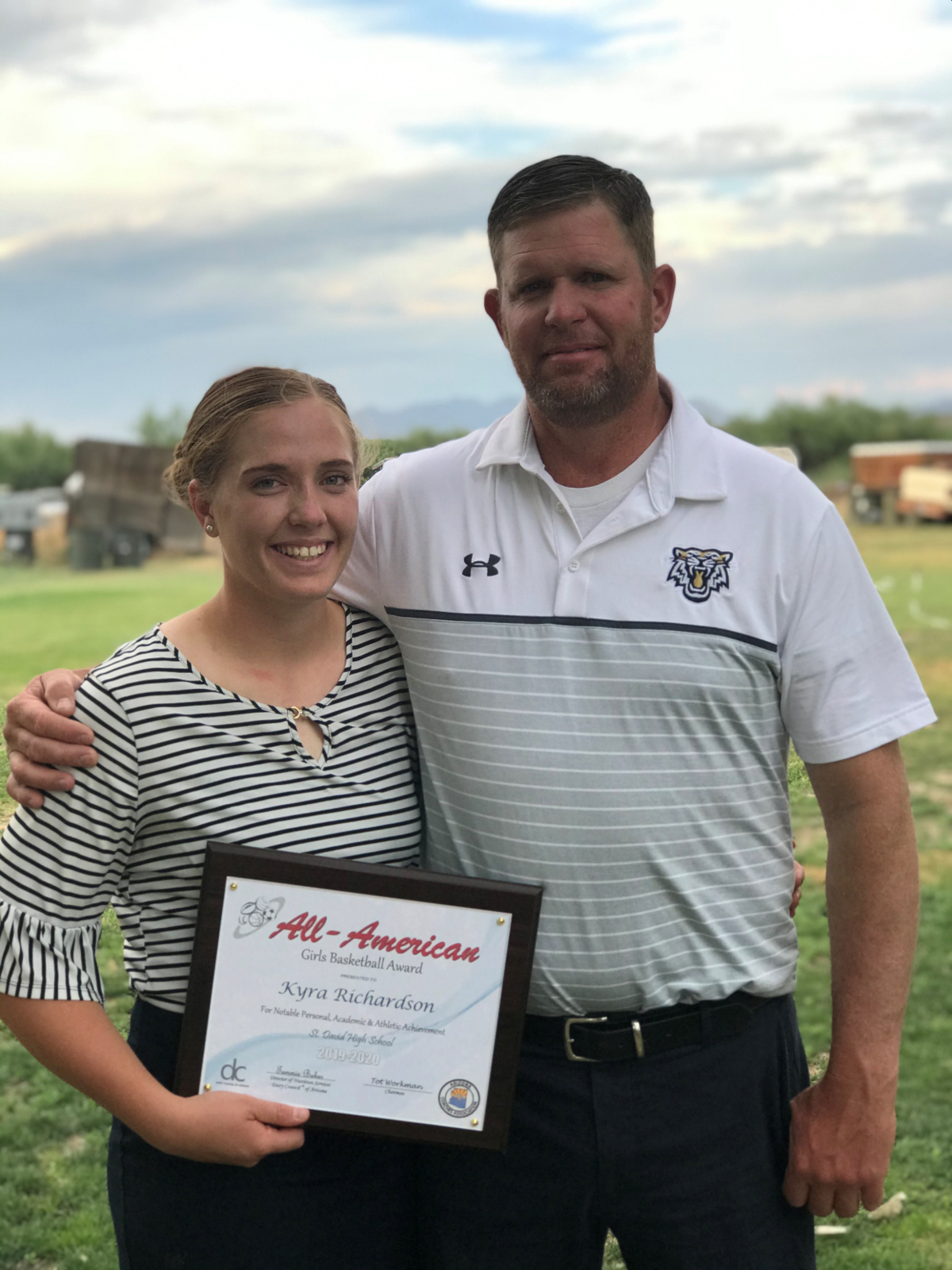 When Coach Tot Workman, a member of the ‘National Coaches Hall of Fame’ and the ‘Arizona Coaches Hall of Fame’ for both football and track & field and the Arizona Coaches Association, learned that four athletes from the St. David girls’ basketball team would be honored by the Arizona Coaches’ Association as Arizona All-Americans, he was beyond excited as this was, to his recollections, the first time four members of the same team had ever received this award in the same year. He was equally excited that the newly selected award winners were from his alma mater – St. David High School.

Coach Workman graduated from St. David High School in 1958, having been an avid athlete who participated in football, basketball, baseball, and track & field. He would go on to compete at Arizona State College in Flagstaff (now Northern Arizona University) on a football scholarship as a running back and defensive back. Years of teaching and coaching have given him numerous memories of students and athletes who have achieved amazing goals, broken records, and gone on to accomplished careers. But it was his athletic roots that brought him to St. David on Friday, June 5th, to present the prestigious Arizona Coaches Association ‘Arizona All-American’ awards to four Lady Tiger girls’ basketball players – Akira Jones, Jaylin Richardson, Kyra Richardson, and Kyla Trejo.

“Normally these awards would be presented to all the athletes from around Arizona at a state banquet but due to Covid19 restrictions this was not possible,” Coach Workman said. “But I was honored to go to St. David to personally present these awards. It is not common for four members of one team to be recognized as Arizona All-Americans. This is definitely a tribute to each of them, their families, and their school.”

The requirements for the Arizona All-American Award, according to Coach Workman, are the toughest in the country. Students who apply must have, in addition to participating in athletics, a minimum 3.2 GPA, participate in extracurricular and community service activities, have letters of recommendation from their administration/coach/and athletic director, send in their resume, and write an essay explaining what it means to them to be an all-American.

St. David girls’ basketball coach Laron Richardson has been sharing the All-American award information with his players for many years and is honored that four of his athletes from this season were being honored. “It definitely takes a lot of time and hard work to earn this award, even to submitting everything needed to be considered,” Coach Richardson said. “I was very pleased that four of our athletes were selected – what an honor for them and our school.”

“I felt honored to receive this award from Coach Workman and that he personally presented the plaques to us,” senior award winner Jaylin Richardson said, “especially with everything that is going on with Covid19.” Echoing Jaylin’s sentiments of how honored she felt, senior Akira Jones also felt grateful for not only being given the opportunity to apply for the award but for being recommended. “When I was given the chance to speak to everyone about my receiving the Arizona All-American Award, I suddenly realized what an amazing honor it was. I definitely had a hard time putting my feelings into words – it was really emotional.” Fellow senior and award winner Kyra Richardson shared that this was not only a proud moment for her but also for the school and her family. “This award shows what athletes do in all areas of their lives, not just in their individual sports,” Kyra said. “I was honored to be selected as one of the top student athletes in Arizona as an All-American and I want to thank everyone who made this possible.”

“I’d also like to thank the United Dairymen of Arizona who help sponsor this award,” Coach Workman said, “and it was definitely a privilege to present these four awards at my Alma Mater. Congratulations to every athlete in Arizona who earned these Arizona Coaches Association All-American honors.”