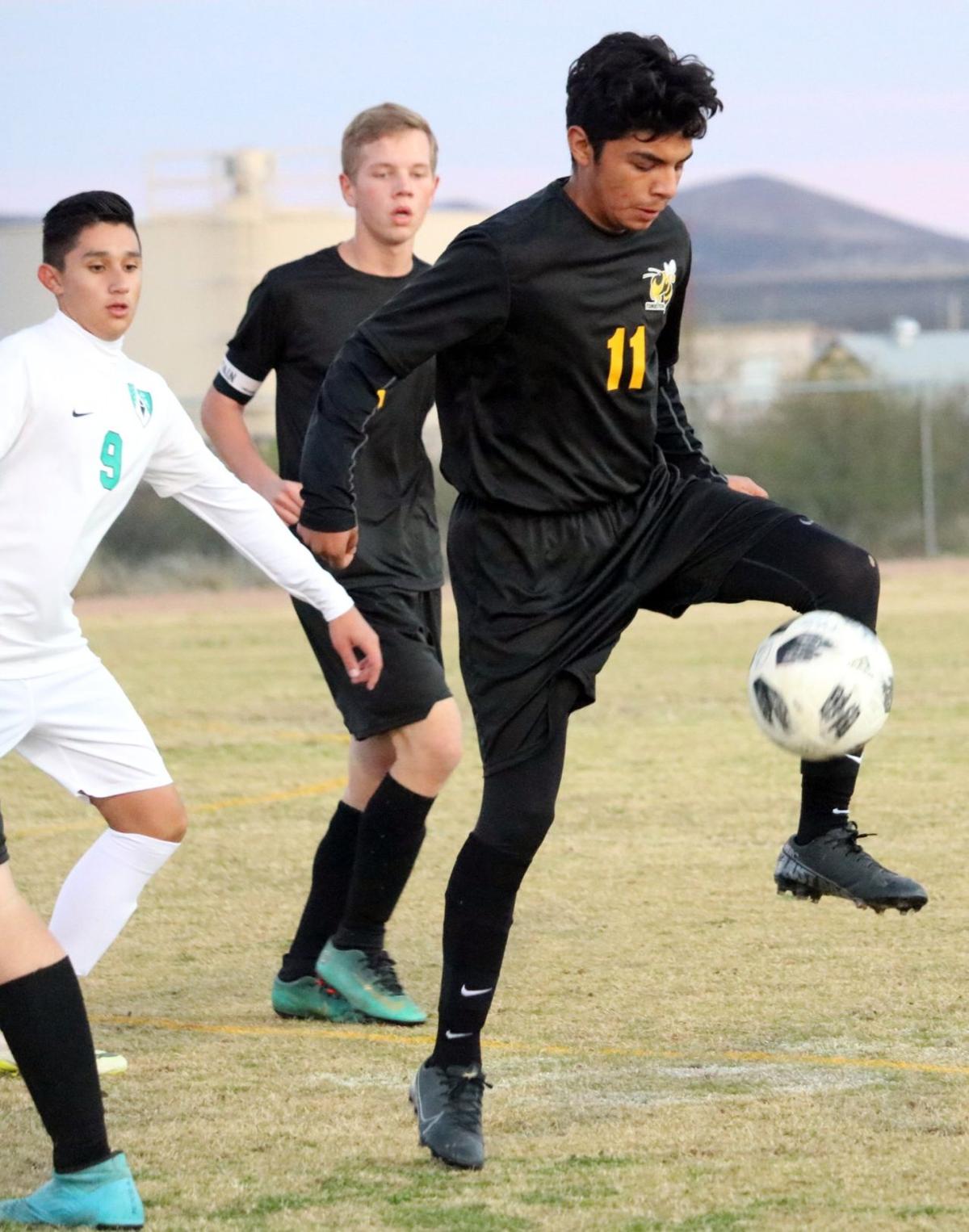 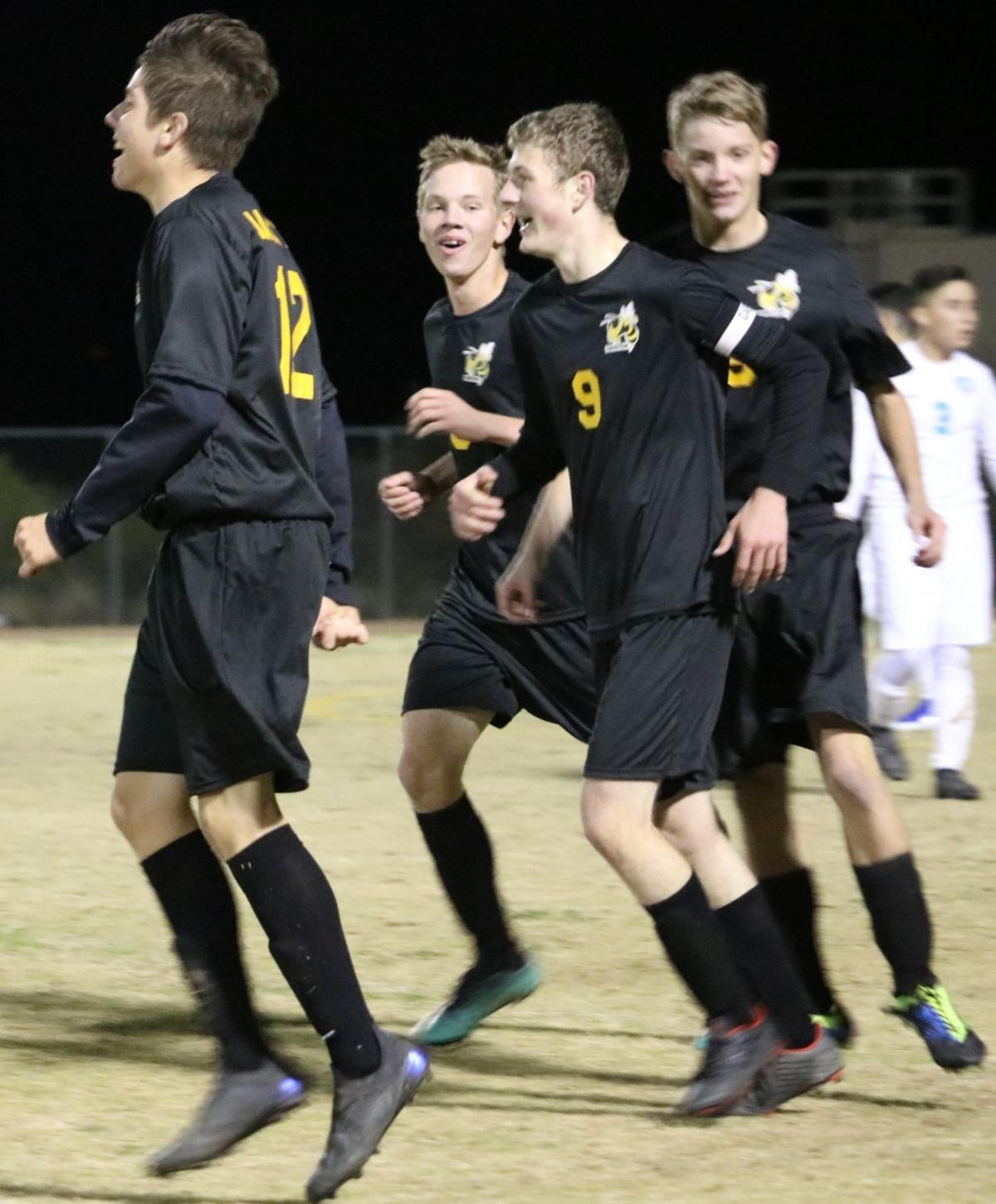 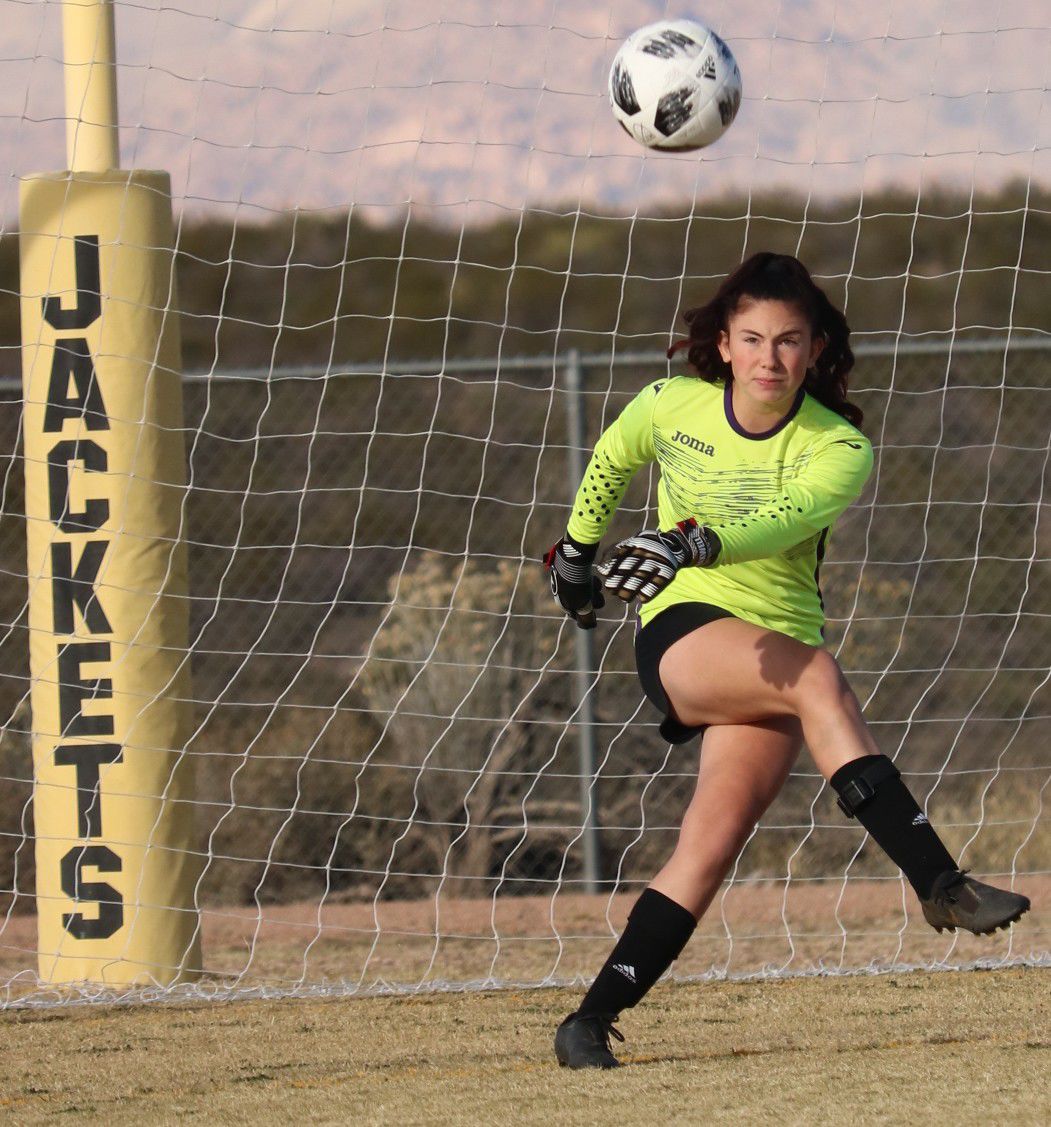 Victoria Maxwell launches the ball upfield for her teammates to get Monday afternoon in Tombstone. 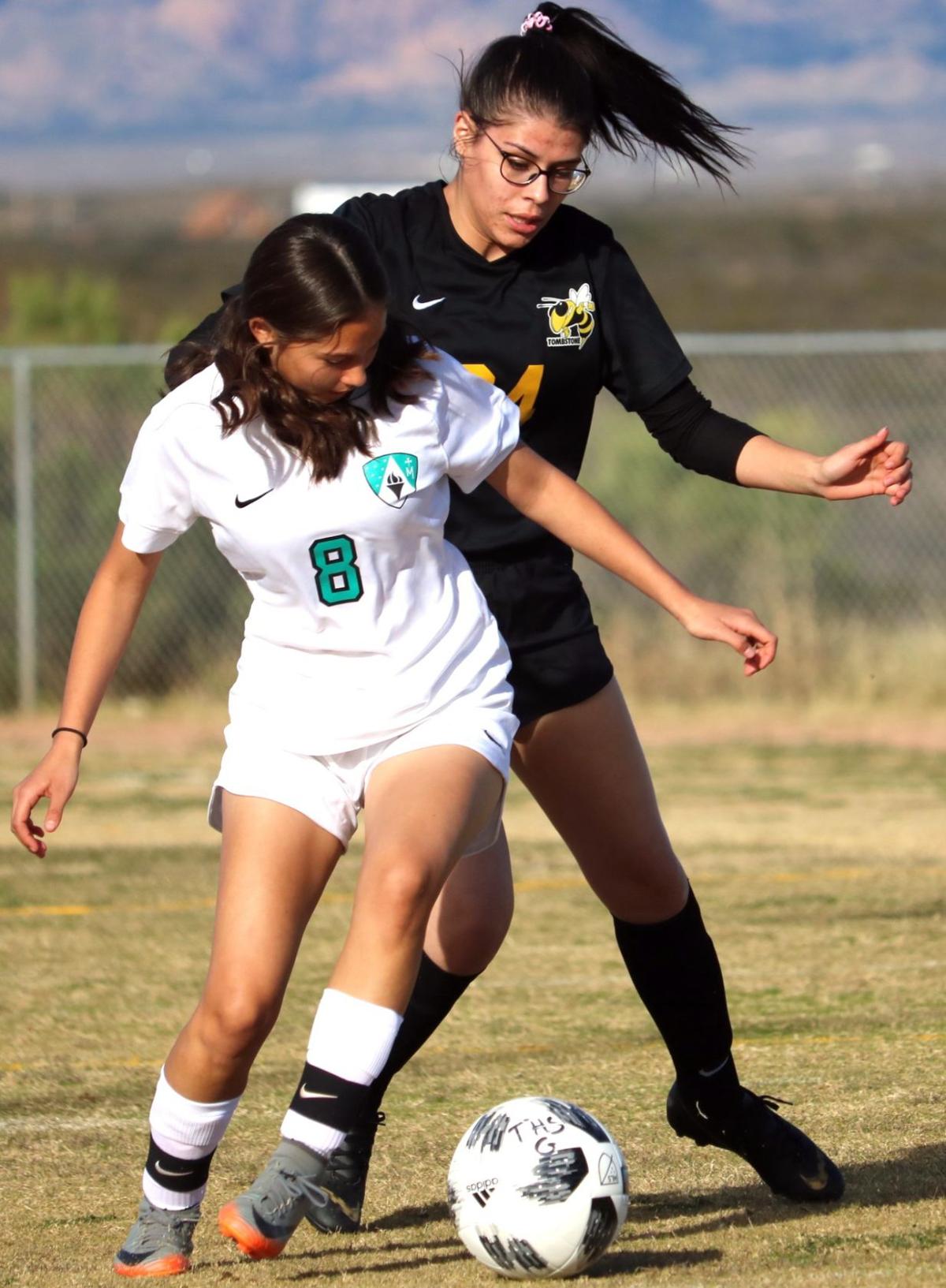 Kayla Baird looks to take the ball away from the St. John Paul II player in the first half of Monday’s match. 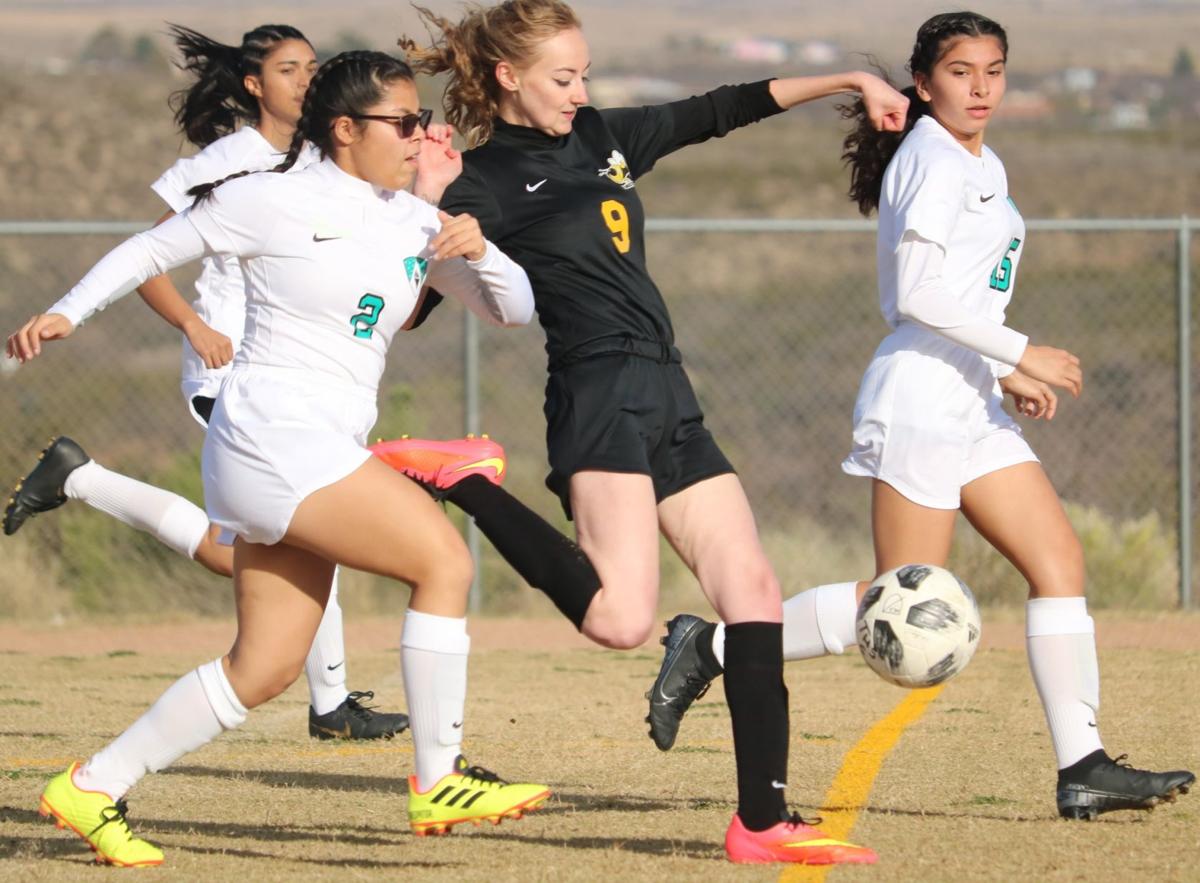 Alaianna Barber takes a shot on goal early in the Yellow Jackets’ home opener against St. John Paul II despite having three defenders on her. 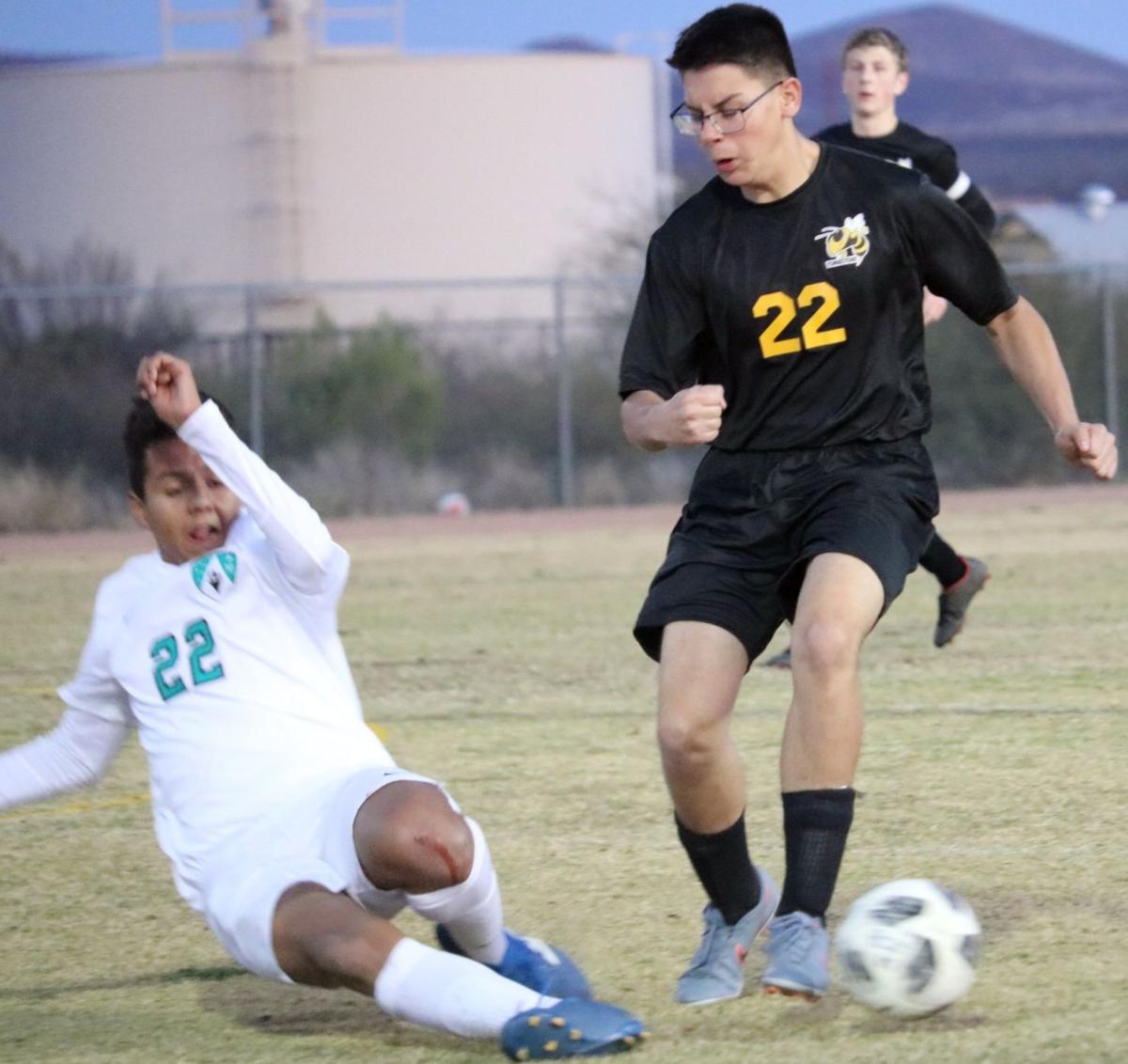 Dakota Bible looks to avoid a sliding defender in Tombstone’s 5-3 loss on Monday.

Victoria Maxwell launches the ball upfield for her teammates to get Monday afternoon in Tombstone.

Kayla Baird looks to take the ball away from the St. John Paul II player in the first half of Monday’s match.

Alaianna Barber takes a shot on goal early in the Yellow Jackets’ home opener against St. John Paul II despite having three defenders on her.

Dakota Bible looks to avoid a sliding defender in Tombstone’s 5-3 loss on Monday.

TOMBSTONE — The Yellow Jacket girls and boys soccer teams both fell to the Lions of St. John Paul II High School, from Avondale, in their first home games of season on Monday. However, the night wasn’t completely sour, as the boys made school history by just stepping onto the field as Tombstone hosted their first ever boys soccer game. The boys team also scored their first goals in program history.

Tombstone Unified School District’s school board approved the start of a boys soccer program in May, just one year after starting their girls program.

The boys fell to the visiting Lions 5-3, but their three goals were the first of the young season, thus the first in program history. St. John Paul II broke the scoreless tie midway through the first half when Eric Romero was able to beat Tombstone’s keeper. Romero scored all five goals for the Lions, three of which came in the first half.

The Yellow Jackets trailed 3-0 after the first 40 minutes, prompting changes by the Yellow Jackets. Head coach John Conroy said he made halftime changes to the team’s formation and put more of his skilled players up front.

“I challenged the boys to be aggressive and win more balls,” he said. “And I think we didn’t have to play much defense in the second half.”

Changing positions paid off for the coach and his players. Zeke Esparza score the program’s first goal with 28:17 left to play in the game and cut the Yellow Jackets’ deficit to two goals. Thirteen minutes later, Tombstone was on the board again, this time off the foot of Justin Nass. Esparza teamed up with Nass on a nice header just three minutes later for the equalizing goal and Nass’ second of the game.

“I was happy to come back from a three-goal deficit,” Conroy said. “For a brand-new program ... I couldn’t ask for more. We have plenty to build off of and to learn from.”

Although momentum was on the home team’s side, ultimately it was St. John Paul II who broke the tie. Romero scored off a direct kick from distance that went over the keeper, hit the crossbar and found its way into the back of the net. Romero notched his fifth and game-clinching goal less than two minutes later. Tombstone’s boys team dropped to 0-2 but can redeem themselves on Wednesday.

The girls started the double-header off with a tight game against an equally matched Lions team. Tombstone spent most of the first half in their defensive side and junior goalkeeper Victoria Maxwell made multiple saves to keep her team in the game. The teams went into halftime tied 0-0.

Less than 10 minutes into the second half, St. John Paul II beat Maxwell and scored the lone goal of the game. The Lady Yellow Jackets also fell to 0-2 this season.

Both teams are back in action on Tuesday when they host Catalina. The girls are scheduled to start at 5 p.m. and the boys are slated to begin at 7 p.m.