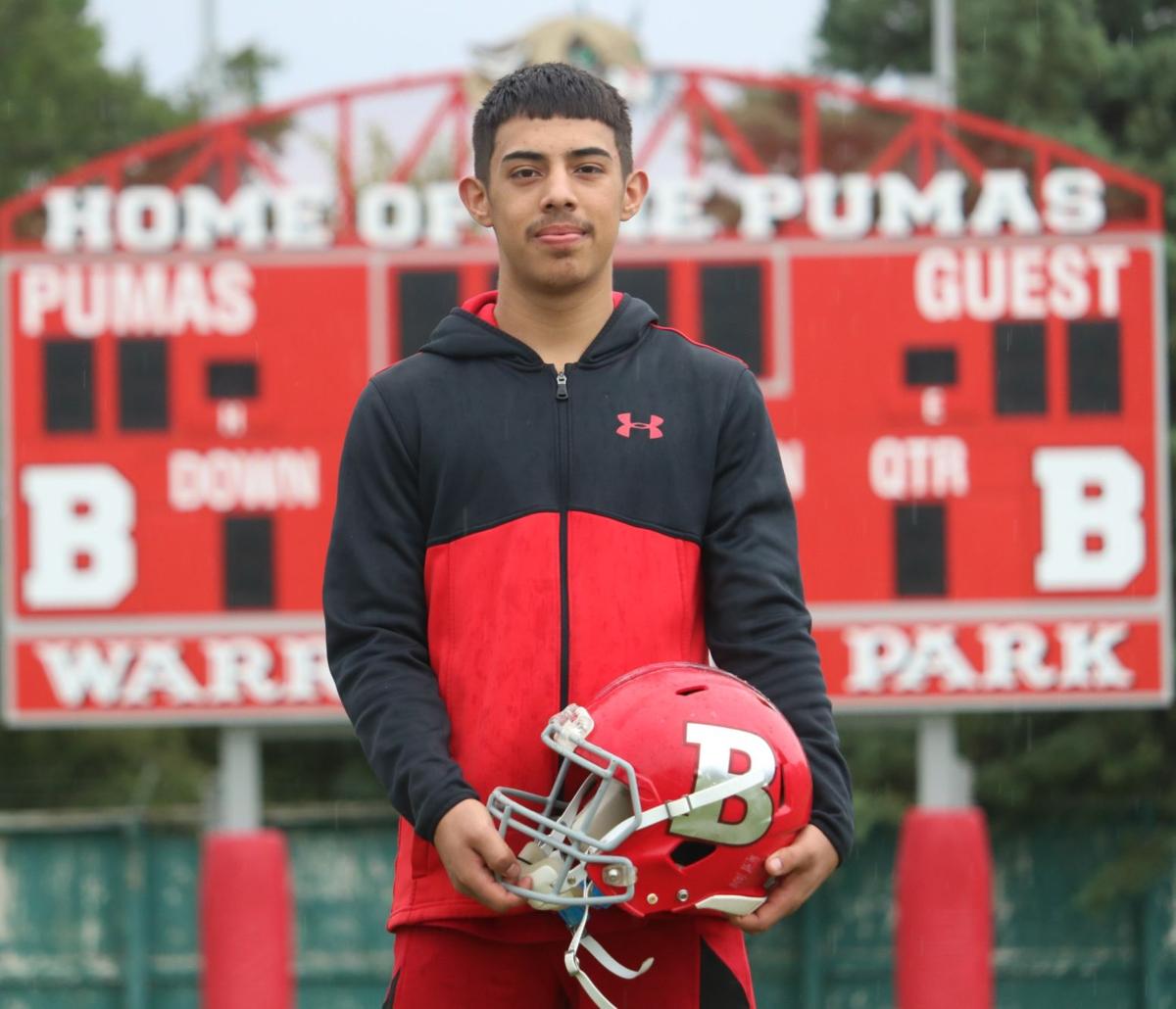 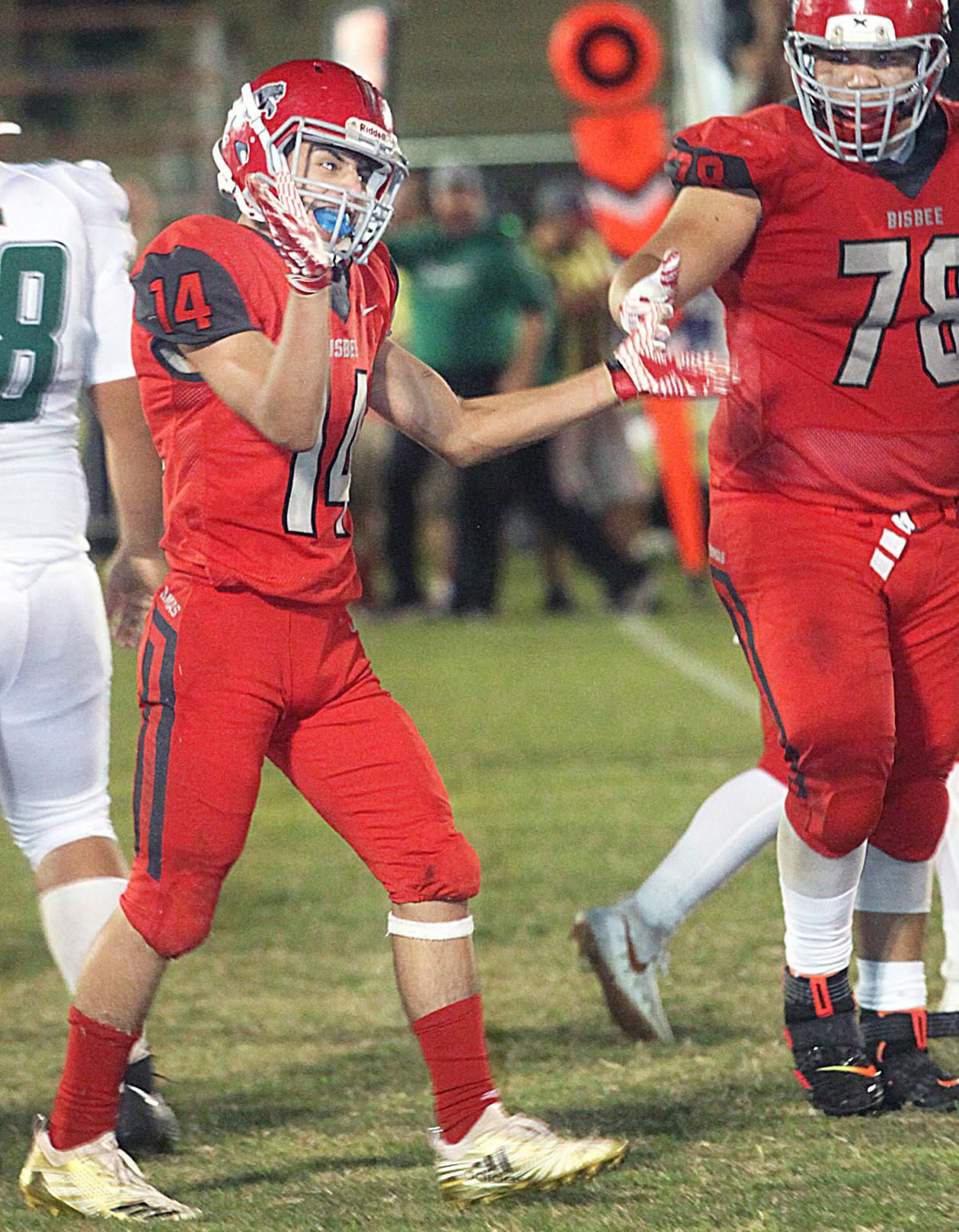 BISBEE — When David Ballesteros steps onto the field or court he’s not only representing Bisbee High School, but Naco as well.

Each morning Ballesteros wakes up earlier than he’d like to catch a bus that drops him off close to the border so he can cross over for a day of learning and athletics.

Ballesteros is one of three players on the Bisbee football team who transitioned to the high school from the Naco School in Naco, Arizona. The senior admits he wasn’t exposed to opportunities playing football growing up, as there weren’t recreation teams in Naco, Sonora — where he lives and has grown up — to play on.

He said it was his friends and current teammates who convinced him to join the team since they noticed his speed and could see how having him could benefit the team.

Ballesteros stepped onto the Warren Ballpark football field for the first time during the season last year. He finally caved in to his peers’ wishes, because he wanted to enjoy his last two years in high school and participating in sports was the best way to do that.

“David is a high energy guy,” said Bisbee’s head football coach Brian Vertrees. “Everything he does is maximum energy. He is an important part of our team and his energy does a lot to set the tone in practice and games.”

Although he has not played long, he is already having an impact on the team. Last week in the Pumas’ win over Miami he had 84 yards rushing on seven carries to bring his three-game total to 244 yards rushing. Ballesteros also leads Bisbee with three sacks so far this season.

“The coaches tell me to get that guy and do my job so that’s what I do,” Ballesteros said. “I like being on the field with these guys, (and) if you’re mad at something you can take it out on the field.”

Todd Hammett, who has coached Ballesteros in baseball for many years, isn’t surprised the success Ballesteros is having in football, but is in awe how fast he has been able to pick up the sport.

“There’s no doubting his athletic ability,” Hammett said. “There are some qualities he has that fit with football. His personality fits with football.”

In addition to football, Ballesteros also is on the school’s basketball and baseball teams. The senior says he likes participating in multiple sports because it keeps him in shape and out of trouble since he’s constantly busy.

“I’m just trying to enjoy everything,” Ballesteros said “I like sports because I stay in shape and I don’t get tired quickly.”

He started his journey into athletics with baseball, which he says he has played for as long as be can remember after his older brother introduced him to the game. The pair played for the Pumas for a couple of years before his brother graduated in 2018. Last season, he was named to the second All Region team for baseball.

Ballesteros shows his ability on the field the person he is off the field is also what makes him special.

“As high energy as he is, he’s an even higher character kid who puts the team first,” Vertrees said.

When he’s not playing a sport, Ballesteros like helping out his father at his body shop. Ballesteros says he enjoys painting and fixing up the cars with his dad on the weekends. Family is important to the teenager as he looks up to his grandfather, since he’s the strongest man he knows after surviving a serious car accident and heart transplant.

“He’s the kind of kid that puts a smile on everyone’s face when he walks into a room,” Hammett said.