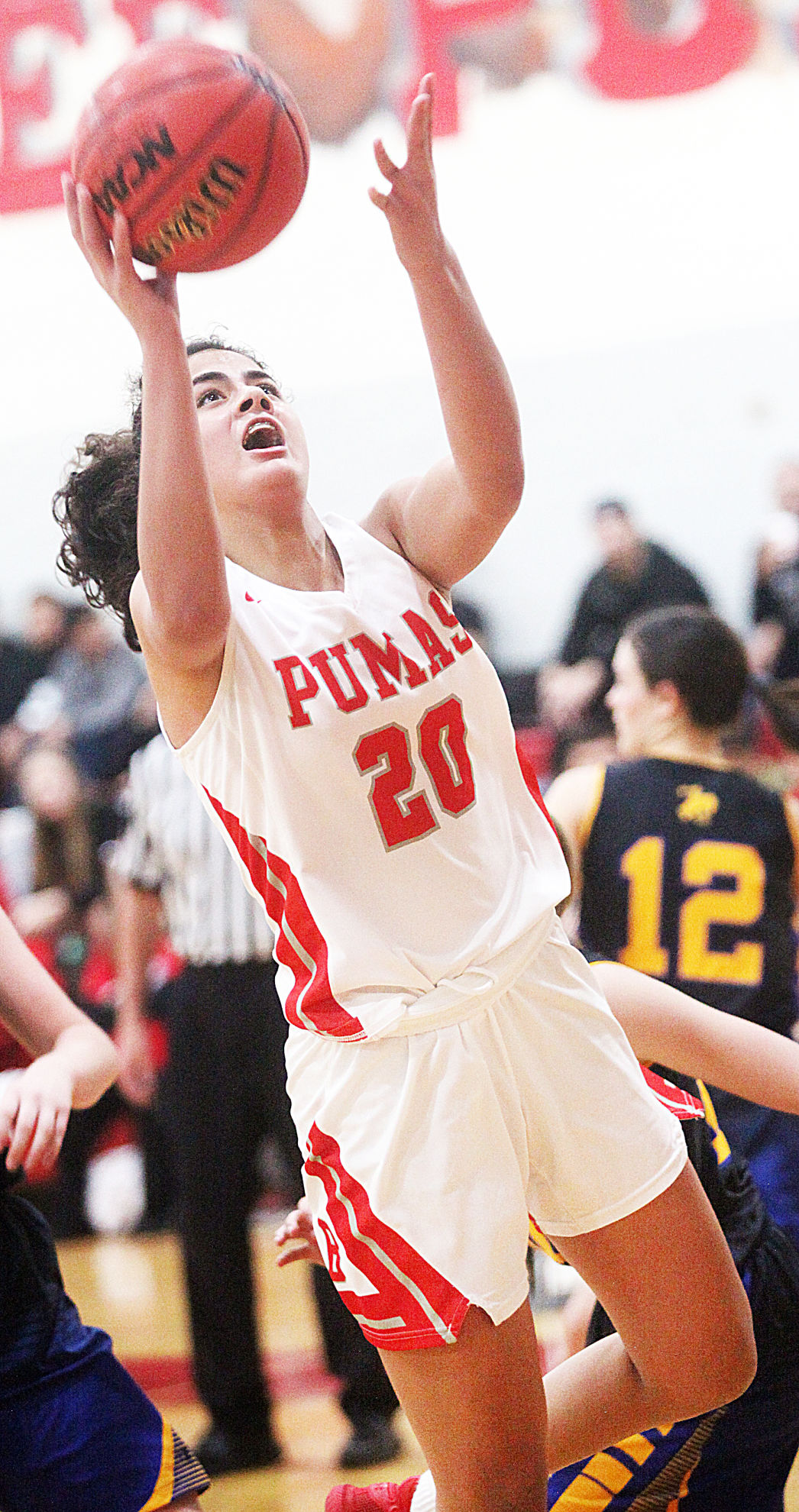 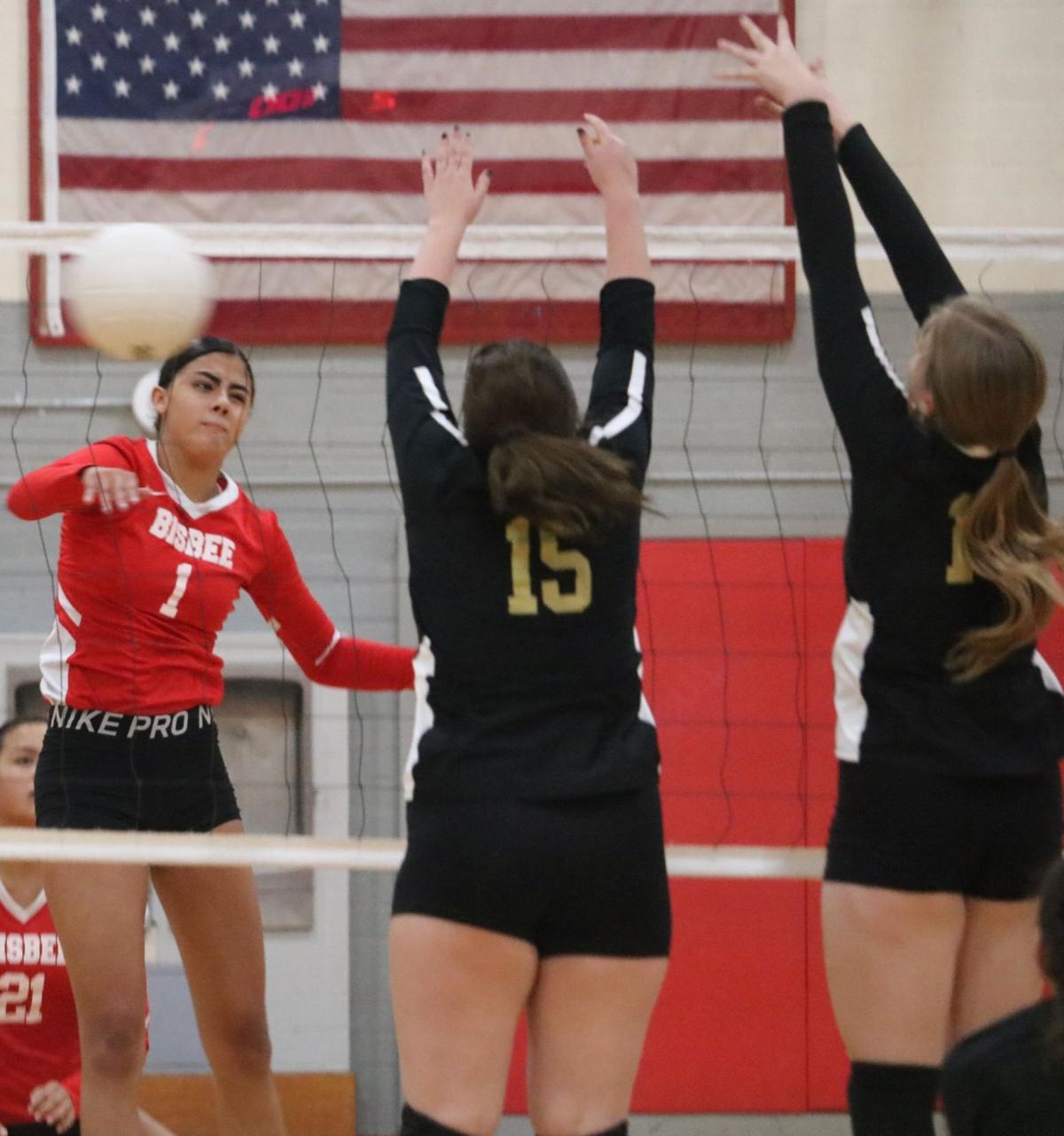 In addition to her standout play on the basketball court, Gabby Lopez also plays volleyball and softball.

In addition to her standout play on the basketball court, Gabby Lopez also plays volleyball and softball.

As a freshman, Gabby Lopez leads the Bisbee High School girls basketball team in points per game, rebounds per game and total points this season. However, if you ask the guard, she still has more to improve on.

“I don’t know why, but it’s been hard for me to be in shape for the season,” Lopez admits. “I want to better myself, but also help my teammates get better.”

Although she says she’s not in shape, Lopez’s finesse with the ball and her quiet leadership method is what’s most noticeable on the court. In her first season, she is averaging 17.9 points per game, 4.8 rebounds per game and has 305 points so far this season. She also has one double-double and a triple-double with nine games remaining in the season.

“I thought I would get (success) later like my senior year, not now though,” Lopez said.

Her impact on the team isn’t lost on head coach Courtney Borquez.

“Gabby is the (missing) piece to our puzzle,” Borquez said. “She has come to the team and has picked up everything the other varsity girls already know with ease. She has natural skills for being a freshman, and I’m so excited I have her on our team for the next few years.”

The group of girls on the Bisbee squad have held a top spot in the rankings all season, which has surprised many — but not Lopez. She said she decided to play for Bisbee because of how impressive the team looked last year, with almost all the players from that season returning, and will be together next year too.

“We really bond well with each other,” she said. “We don’t have drama ... we’re just chill. I really like how the team played last year and thought we could go far this year and next year.”

The teenager first started playing basketball when she was 5 years old. She said she was intrigued by the sport from watching her older brother play. Before entering high school she played for Lowell Junior High School and multiple teams out of the Bisbee area.

Lopez played for two Hoopology teams, based out of Sierra Vista, one girls team and one boys team after the girls season ended. Last year, as an eighth grader, Lopez played on a travel team based out of Tucson, which required a lot of time on the road for games, practices and tournaments.

“It was hard to manage my time, but it was worth it,” Lopez said.

Time management has been a hard lesson for Lopez to learn. She said maintaining her grades is important to her so she can stay eligible for all three sports she plays in. Lopez said the long bus rides provide time for her to get homework done because when they get back it’s late at night.

In the fall, Lopez played for the Pumas volleyball team and in the spring she plans on playing softball. Lopez said she started playing both sports because her mom played them when she was younger. Over the years she said her mom has taught her and helped her improve both on the court and on the diamond.

For Lopez, her parents support means everything to her. She said without them and their willingness to give her advice and take her to games and practices, she wouldn’t be where she is today, playing for the opportunity to earn a spot on a college team someday.

“My dad pushes me to get better everyday. It helps me better myself and know what my mistakes are so I can fix them,” she said. “Sometimes it’s extra pressure, but it’s helpful.”