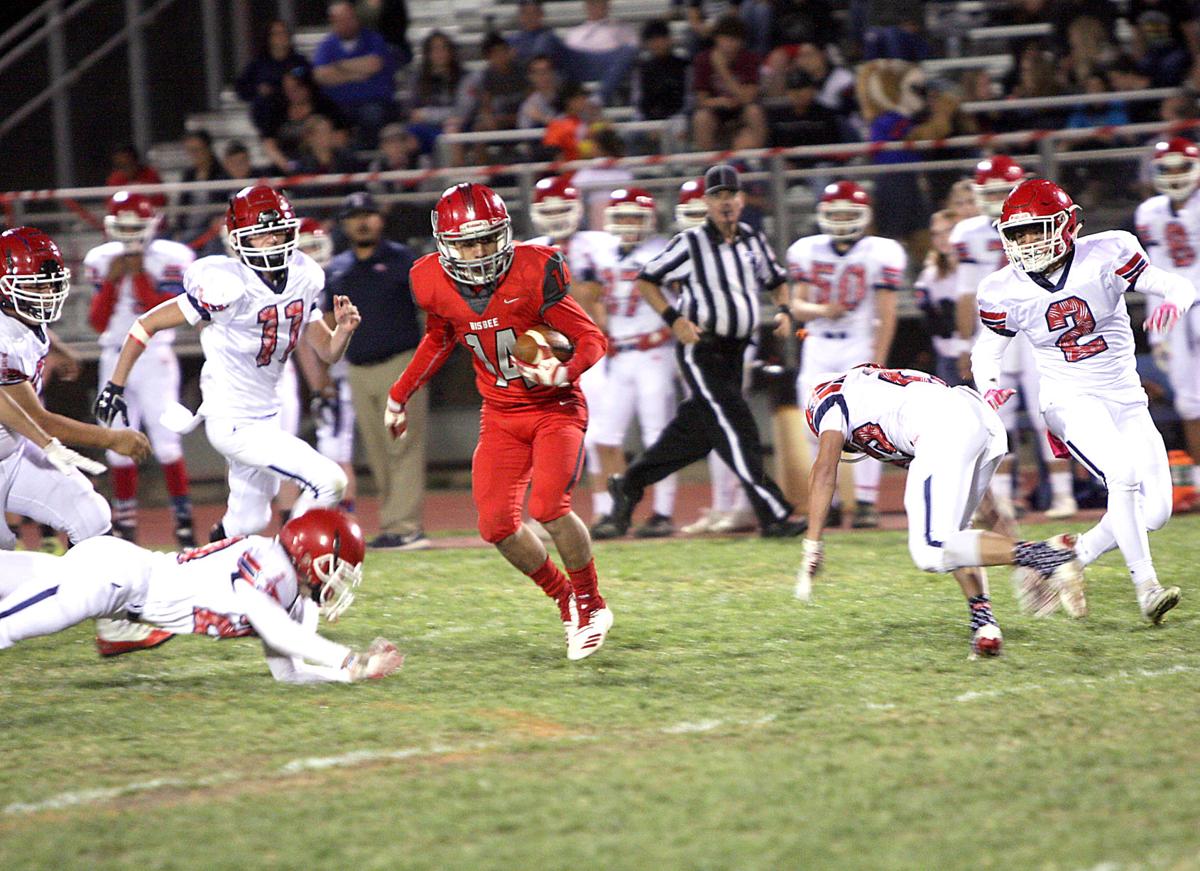 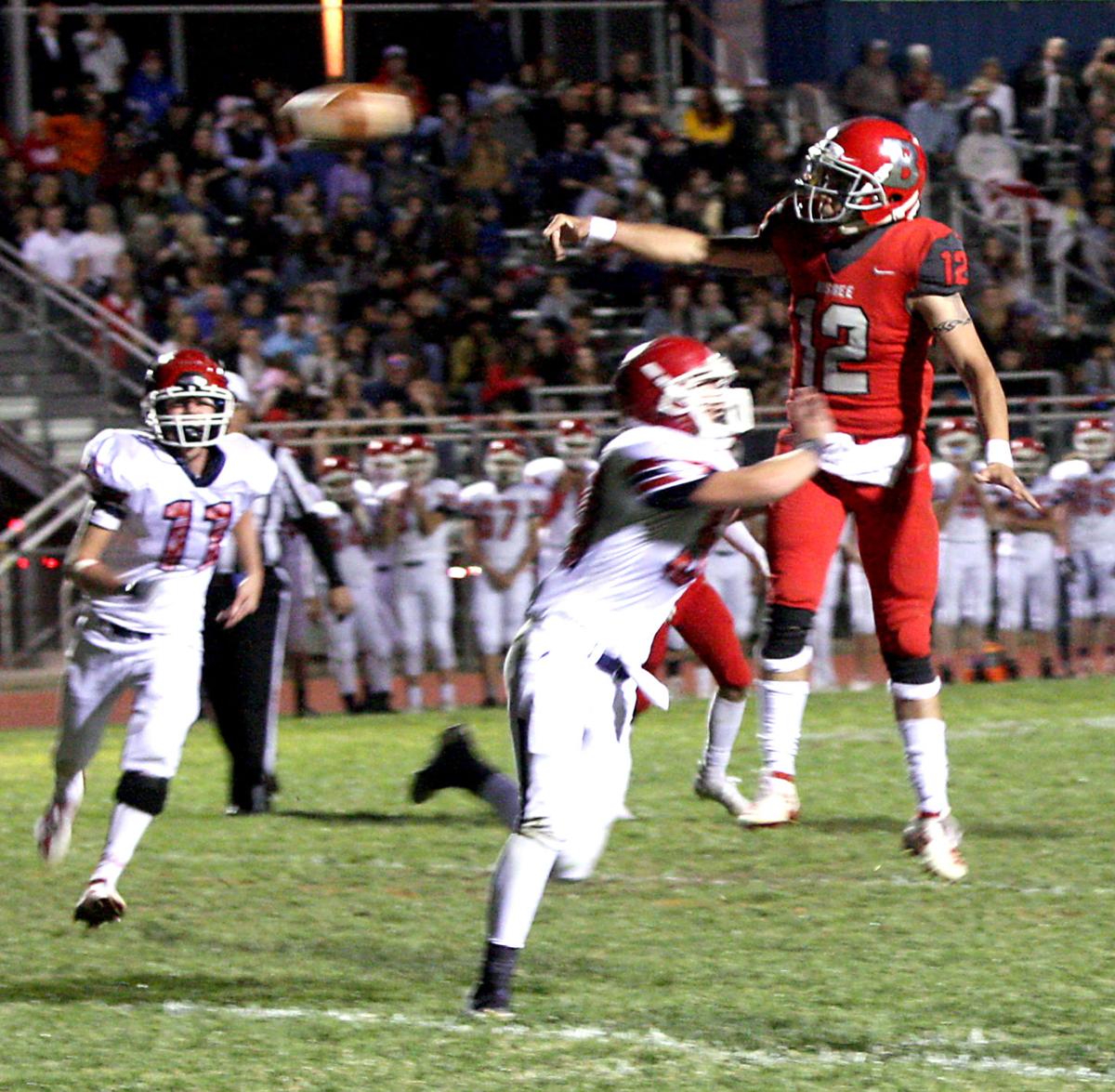 Bisbee quarterback RJ Wright got this pass off for a completion despite the heavy Benson defensive pressure Friday in Benson. 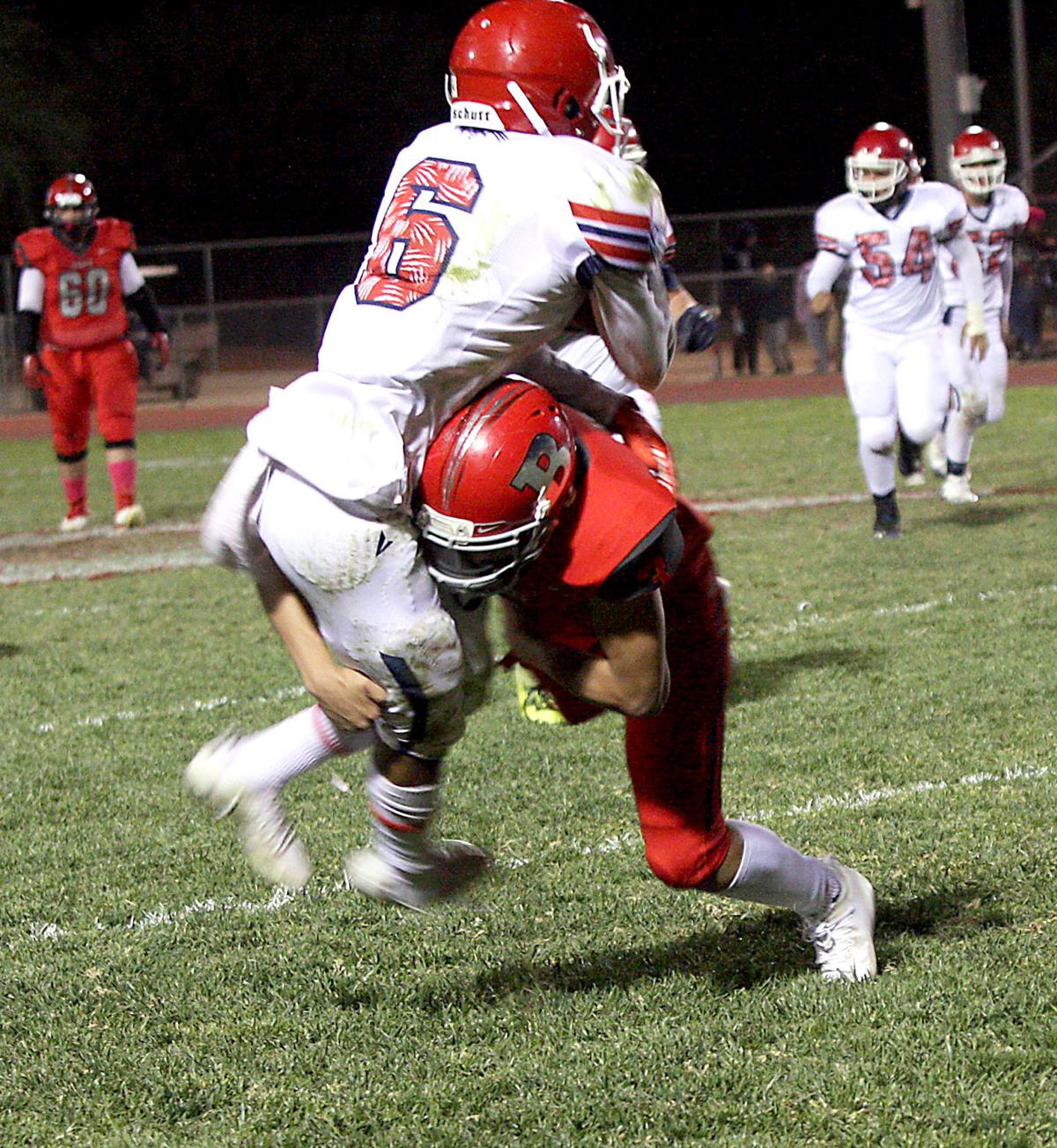 Bisbee quarterback RJ Wright got this pass off for a completion despite the heavy Benson defensive pressure Friday in Benson.

BENSON — It was the host Bobcats who answered the bell on the gridiron Friday in a battle with Bisbee for 2A San Pedro Region supremacy.

Jace Barney ran for three touchdowns, Carson Barney added two more and D’Ondre Villalobos scored another to lead Benson to the 44-18 triumph before a large and raucous crowd at the Jerry P. Lee Athletics Complex on Benson’s homecoming.

It started out well enough for the Pumas who, despite trailing 6-0 at the end of the first quarter, moved the ball in chunks, on the ground and through the air, and kept pace with Benson to trail 14-12 at the half.

The Bobcats drew first blood when Carson Barney capped Benson’s 89-yard, eight-play drive with a seven-yard touchdown run that set the tone for the home team.

The Benson score came after the Pumas turned the ball over on downs deep in Bobcats territory after a fourth-and-5 pass play was foiled by the Benson secondary.

The Pumas were on the board on their next possession with Molina scoring the first of two touchdowns with 7:53 remaining in the second quarter to cap a seven-play, 61-yard drive. The point after attempt was blocked which knotted the score at 6-6.

The Bobcats regained the lead with just under three minutes left in the half on Jace Barney’s 3-yard plunge right up the middle and Talon Palmer, on a quarterback keeper, converted the two-point attempt to give Benson the 14-6 lead it would not relinquish.

But Bisbee was not finished. Bug Molina, on an option pass after receiving the pitch from quarterback RJ Wright, hit receiver Dano Lopez in stride from Bisbee’s 35-yard line to put the ball inside Benson’s 10. Wright fired a dart on the next play to Manny Amaya alone in the middle of the end zone for the score with 49 seconds remaining in the half. The two-point attempt failed but the Pumas were within striking distance down 14-12 at the half.

But that was the first half and, unfortunately for the Pumas, the second half proved markedly different. The Bobcats, behind its stout offensive and defensive lines, overpowered Bisbee the rest of the game, outscoring the Pumas 30-6, including a 22-point third-quarter outburst that blew the game open and staked Benson to a commanding 36-18 lead headed to the fourth quarter.

The Pumas turned the ball over on downs on their first possession of the second half when Villalobos in the Bobcats’ secondary broke up a 4th-and-2 pass play. Jace Barney’s 4-yard run increased the Bobcats lead 20-12 after the two-point attempt failed.

Bisbee responded. Wright connected again with Amaya on a 17-yard touchdown pass that brought the Pumas closer at 20-18 with just under six minutes left to play in the third quarter. But that would be it for the Pumas as Benson reeled off 24 unanswered points en route to the region victory.

“We didn’t handle the adversity well in the second half,” surmised Bisbee head coach Brian Vertrees. “We talked all week that it was going to come down to the wire and we played three good quarters of football and we had some breaks go our way, but some of the mistakes we made — in both halves — you can’t make against a team coached by Coach Determan. We needed to match their intensity and we just didn’t do that in the second half.”

But Vertrees was pleased with some aspects of the Pumas’ game. “We responded well to our adjustments... but we lost to a good and well-coached football team… we can’t hang our heads. It is what it is and it’s done. We need to focus now on next week,” he said.

David Ballesteros rushed for 133 yards on 11 carries, 103 of which came in the first half. Wright completed 7 of 12 passes for 93 yards and two touchdowns while Lopez netted 102 receiving yards to lead the Pumas. Bisbee had 266 yards total offense.

The defeat drops Bisbee to 6-2 overall, 2-1 in region play, while the win gives the Bobcats a 3-0 league record and a 6-2 mark overall. Bisbee hosts Santa Rita on Friday before closing the regular season at Tombstone High School on Nov. 1.