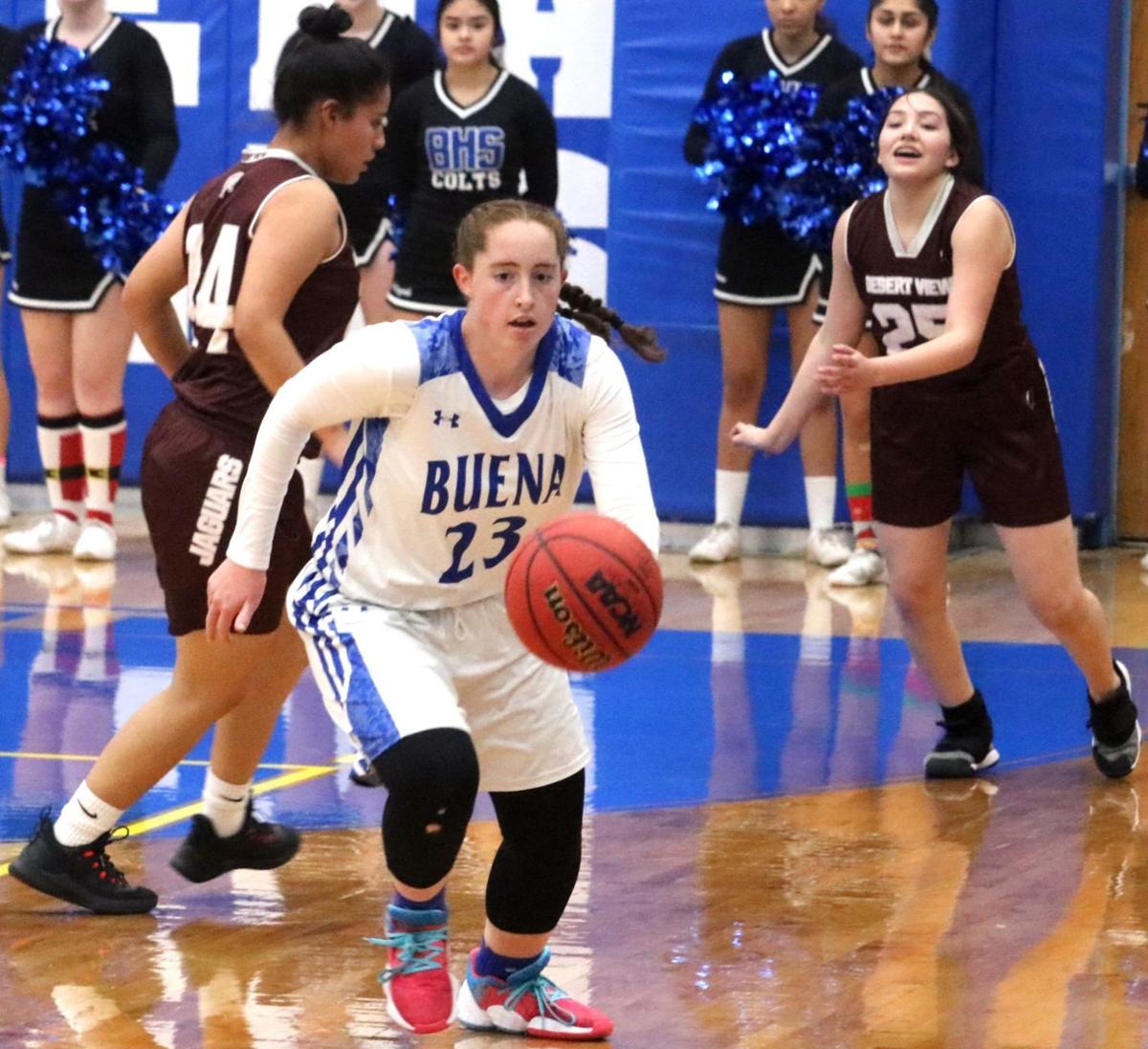 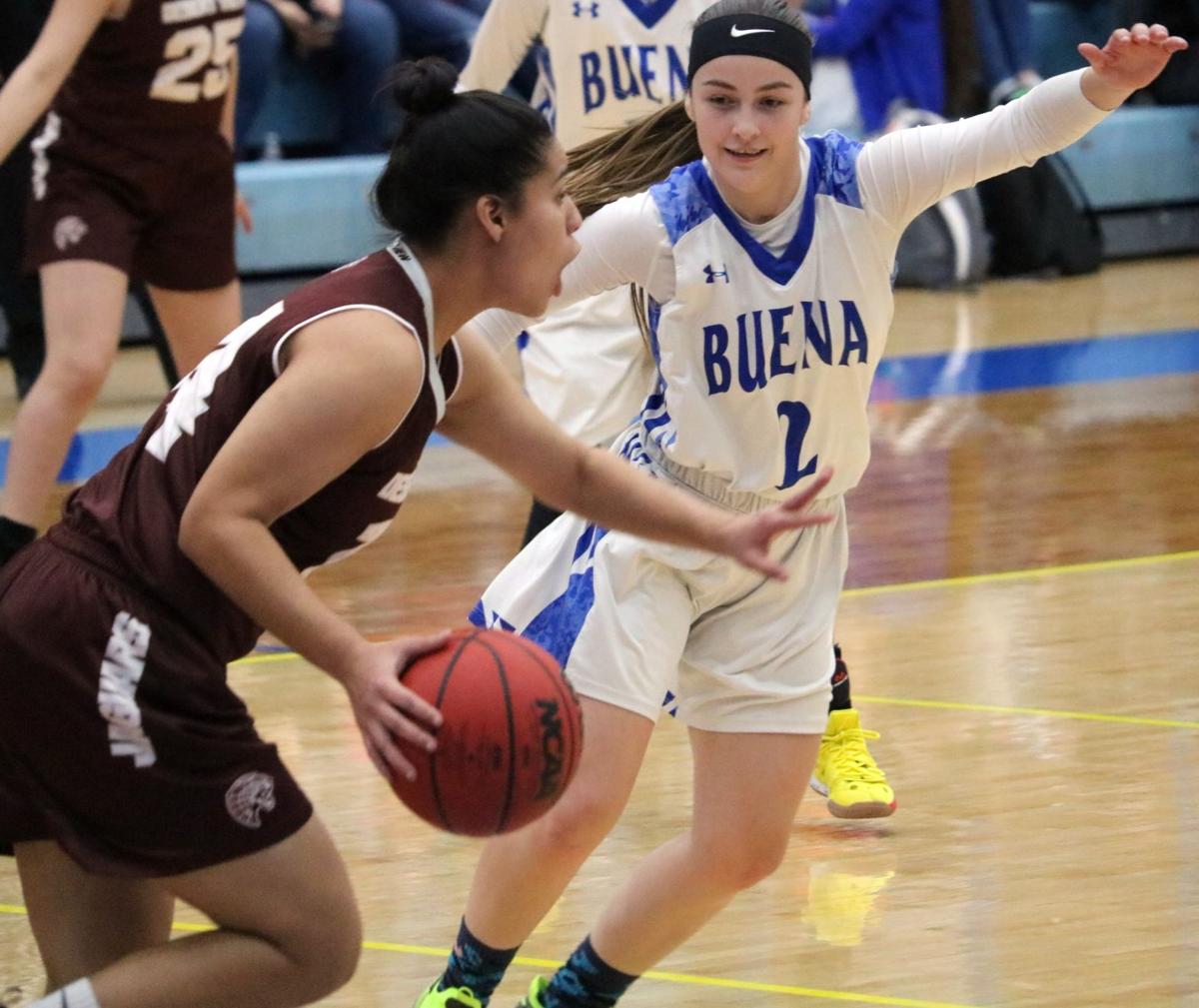 Stephanie Anderson works to prevent Desert View from moving up the floor in Friday’s win in Sierra Vista. 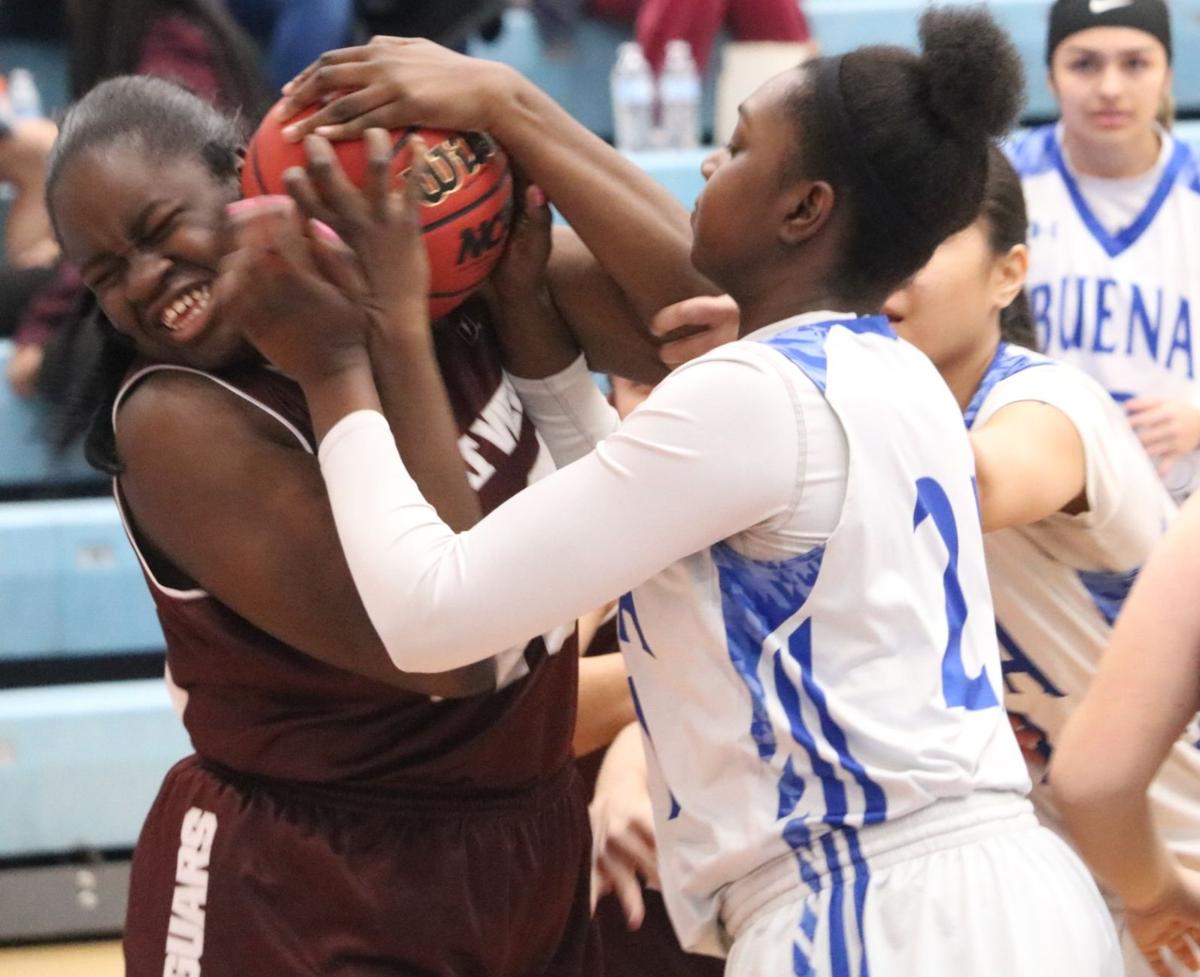 Jaslyn Booker fights for possession with her opponent Friday night in Sierra Vista.

Stephanie Anderson works to prevent Desert View from moving up the floor in Friday’s win in Sierra Vista.

Jaslyn Booker fights for possession with her opponent Friday night in Sierra Vista.

SIERRA VISTA — Buena High School’s girls basketball team had way too much defense for visiting Desert View Friday night, as the Colts defeated the Jaguars 85-3 on their home court to improve to 4-2 on the year.

Buena’s defensive stand broke the school record for fewest points allowed in a game. The previous record of 14 points was set in 1989, also against Desert View.

“This wasn’t a one-game thing, this was years in the making,” Buena head coach Cole Colvin said about the new record.

Friday’s game will be in the record book for a second time as Buena’s 36-point third quarter tied the school’s record for most points scored in a quarter. That record was also set in 1989 in a game against Desert View.

“This team that we have has basically started from the bottom. For them to hold this shows their hard work,” Colvin said “I’m proud of them.”

Buena’s offense was off to a fast start as senior Lydia Griffith sank a 3-pointer seconds into the game to give the Colts the lead. She had the hot hand for the Colts and finished the game with a team-leading 24 points and didn’t play in the fourth quarter.

The Colts used their intensity on defense to help them on both sides of the court and prevent the Jaguars from establishing any offensive rhythm. Colvin said he had used the press defense to build an intensity within his team, which he feels they’ve been lacking in the early going, not to cause a lopsided game.

Buena’s pressure defense made it difficult for Desert View to inbound the ball and move up the floor due to multiple steals by the Colts.

The Jaguars scored their only bucket of the game with 5:40 to play in the first quarter. They tacked on their third point from the foul line with 1:57 left to play in the game.

Zoe Fenton, who entered the game off the bench, finished with 19 points, almost all of which were layups in transition after the Colts stole the ball. Sophomore Alani Encinas was also a benefactor of close buckets after intercepting a couple inbound passes.

The Colts put the game out of reach by halftime as they took their 14-2 first quarter lead and extended it to 40-2 after 16 minutes.

Buena is back on their home court on Tuesday when they host Empire at 7 p.m.