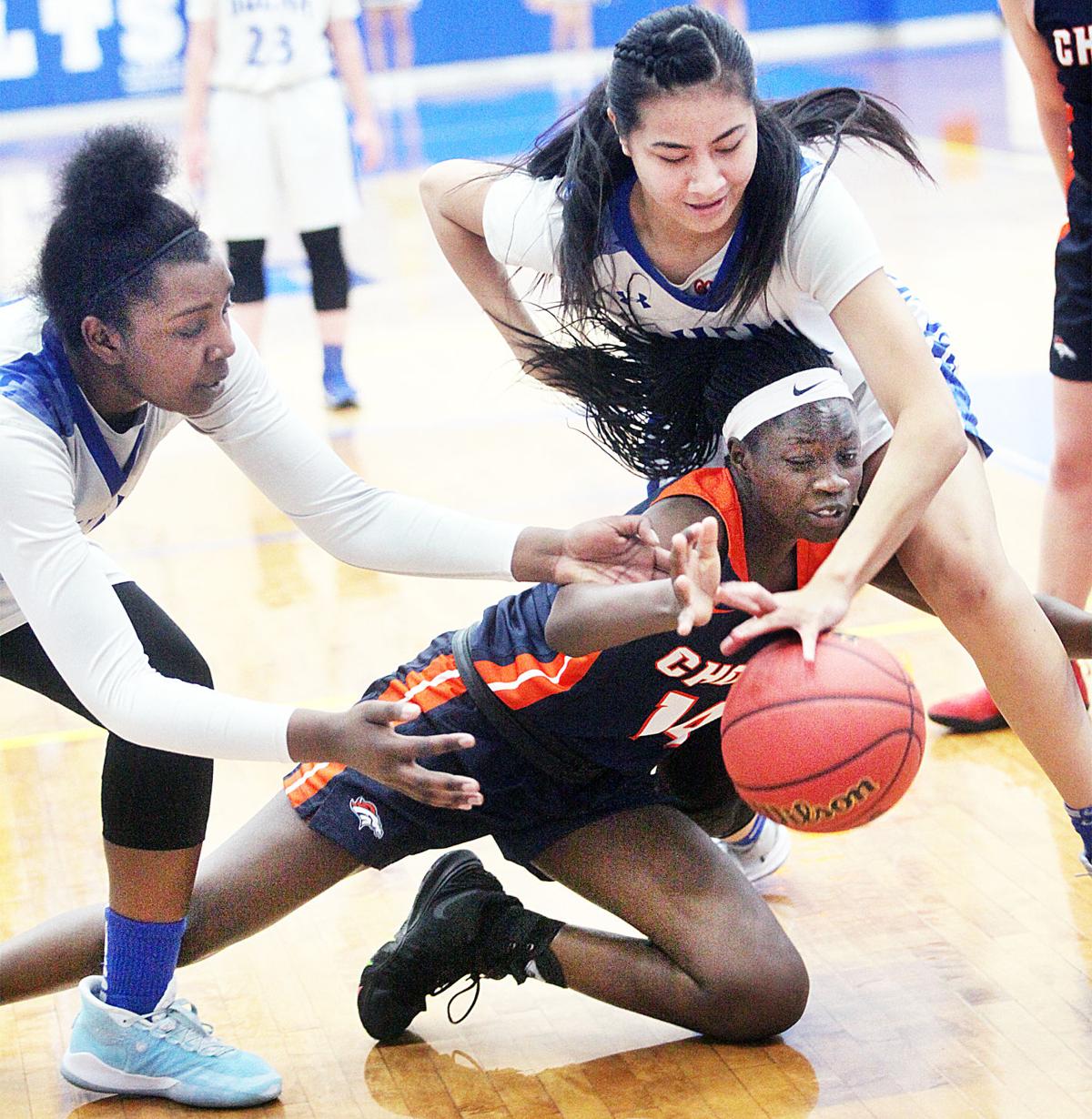 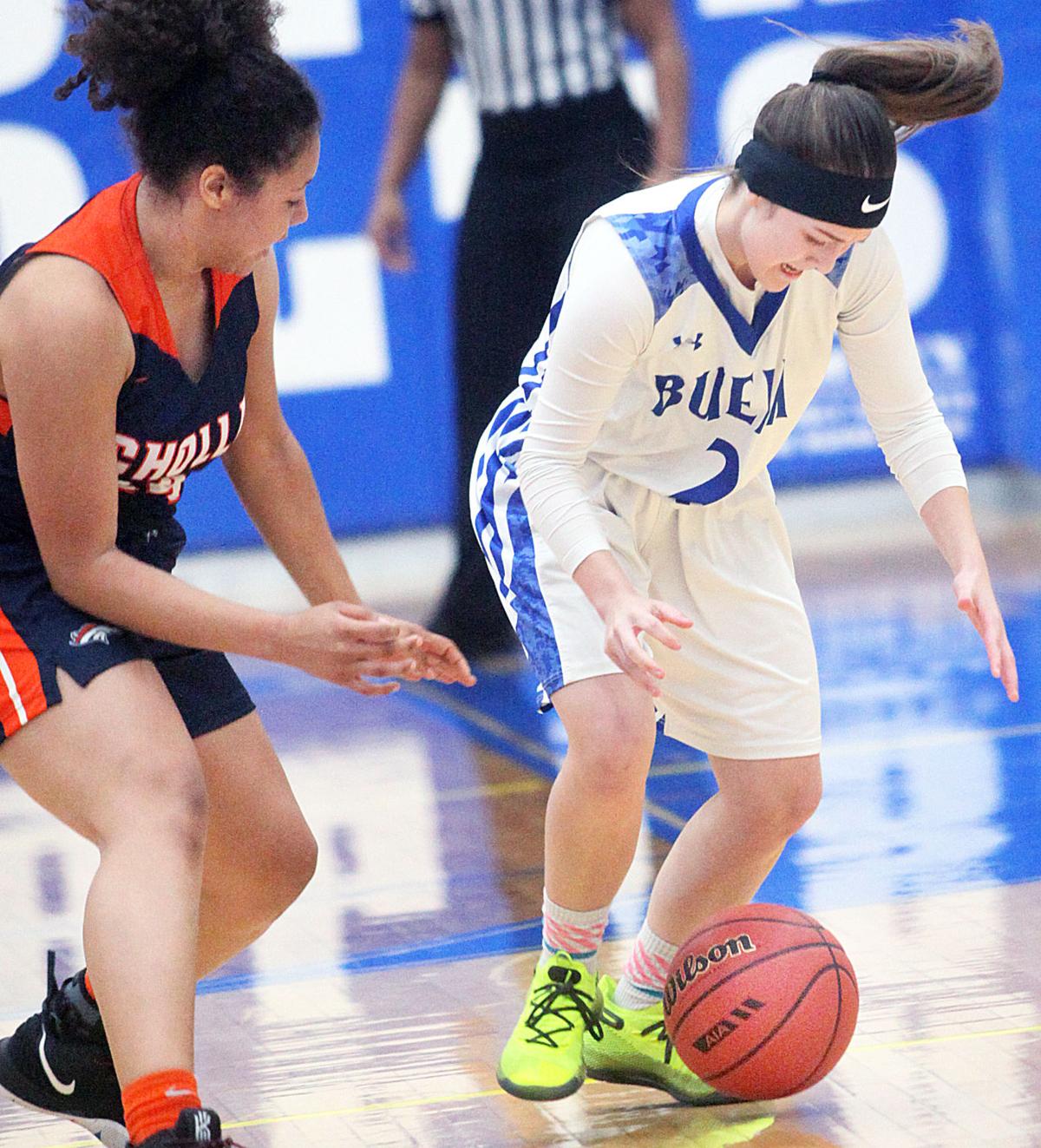 Steph Anderson, senior, is in the process of stealing the ball in Tuesday’s playoff game versus Cholla.

Steph Anderson, senior, is in the process of stealing the ball in Tuesday’s playoff game versus Cholla.

SIERRA VISTA — For the first time in head coach Cole Colvin’s tenure, the Buena High School’s girls basketball team is moving on to the state quarterfinals.

No. 6 Buena defeated No. 12 Cholla High School in Sierra Vista 55-47 on Tuesday night. The girls hosted a playoff game last season but were eliminated by Casteel in the first round.

“It’s a monkey off our back,” Colvin said after the win. “It’s nice to make it past the first round. I know it’s been on my mind since we lost last year.”

Buena had a slow start to Tuesday’s game despite scoring the first basket of the game. Cholla matched Buena’s 3-pointer to open the game with one of their own to tie the game 3-3 midway through the first quarter. Buena moved ahead and didn’t relinquish their lead in the first frame, leading 9-8 through the opening eight minutes.

Cholla’s offense had their way in the second quarter. The Chargers scored eight of the first 10 points to take their first lead, 16-11, with 6:16 to play in the half. Buena couldn’t generate much offence and found themselves trailing by seven with just under three minutes to play in the second quarter. Senior Jaslyn Booker kept the Colts in the game throughout the first half. She scored 11 of Buena’s 19 first-half points and had her team only down four, 23-19, at the break. Booker finished with a team leading 21 points.

“It’s hard to put into words (what Booker means for the team),” Colvin said. “Booker, every night she gives everything she has. She wasn’t losing tonight.”

After a few halftime adjustments, Buena found their groove. Colvin said they switched up their defense to a zone to keep Cholla out of the paint and he put his seniors on the court and they did what they’ve done all season. Lydia Griffith hit a 3-pointer to pull the Colts within three less than 15 seconds into the quarter. Alani Encinas soon drilled a three to knot the game 27-27. Buena pulled ahead late in the quarter after the teams swapped leads and was up 38-32 heading into the final quarter.

Buena scored 16 points in the final frame to keep Cholla out of reach. A 34-point second half propelled the Colts to the state quarterfinals. Encinas his four 3-pointers to finish the game with 12 and Griffith added nine in the win.

Colvin said for the Colts to have success on the road at No. 3 Cactus Shadows, they will have to have a strong defensive game based on what they saw in the summer.

The Colts will play Cactus Shadows in Scottsdale on Thursday. The Falcons defeated No. 14 Williams Field 47-40 to advance to the quarterfinal game. Tipoff is scheduled for 7 p.m.