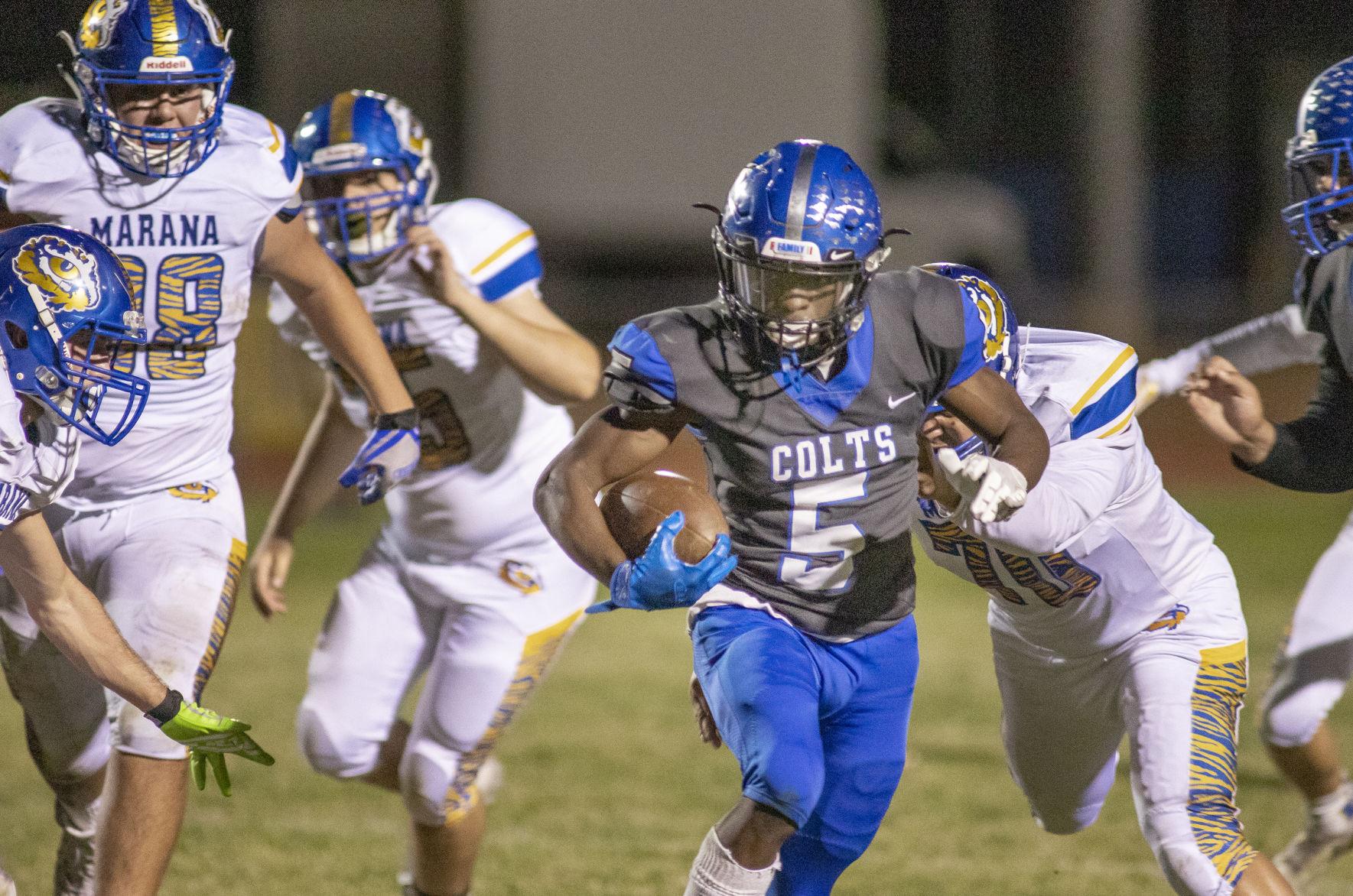 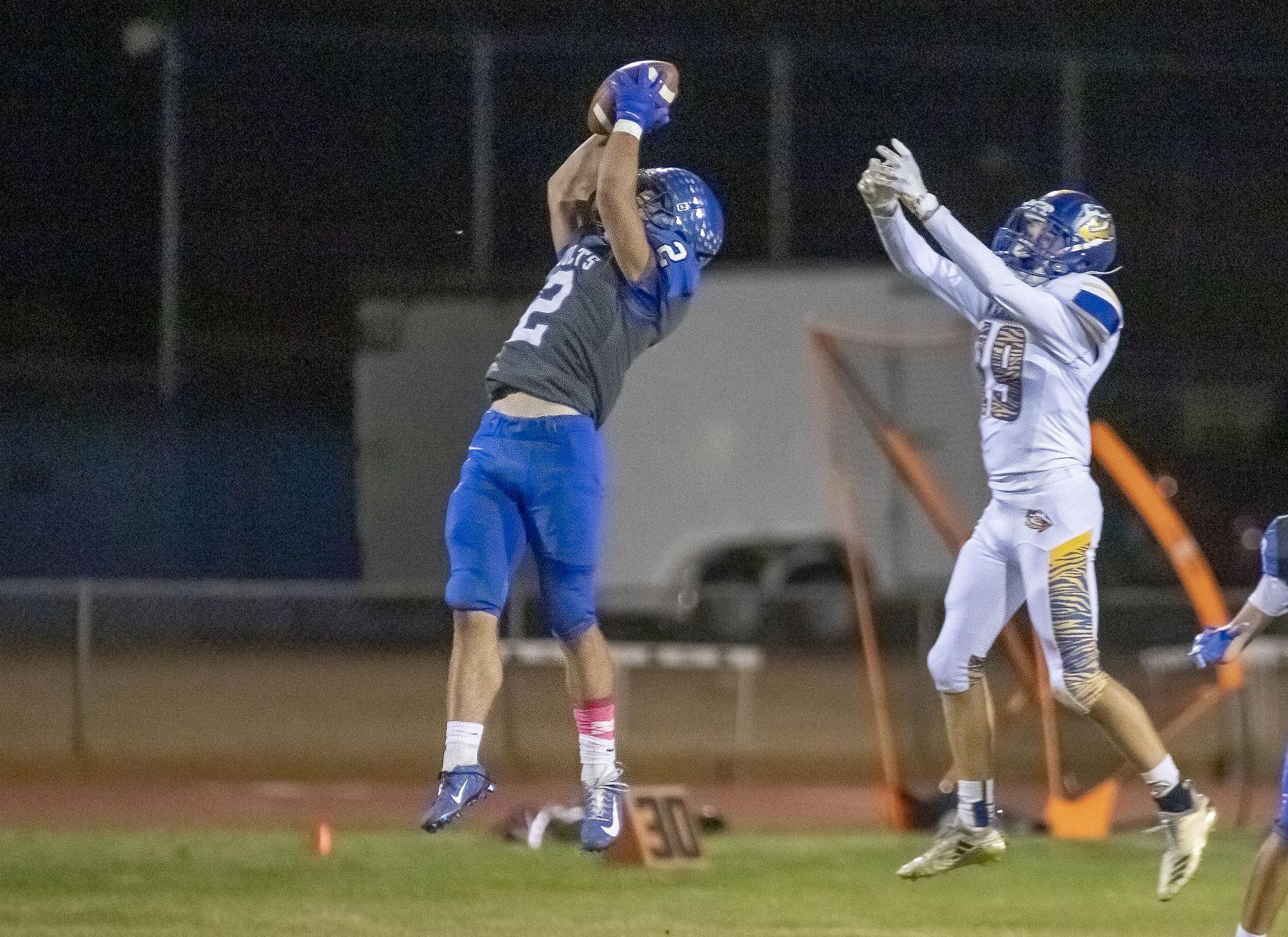 SIERRA VISTA — Buena had their way with Marana Friday night as they handed the visiting squad its sixth loss of the season. The Colts defeated the Tigers 64-6 in their first region game of the season.

Buena’s defense proved too strong for Marana from the Tigers first possession. After receiving the opening kickoff the Tigers went three and out. Marana’s defense didn’t have the same fortune as their opponent. A short punt gave Buena the ball at Marana’s 49-yard line.

Buena took advantage of the short field and capped their opening drive with a 4-yard touchdown run by Jelani Brown. The Colts attempt for two points was stopped but the they were ahead 6-0 with just over two minutes expired in the first quarter.

Marana’s offense didn’t have a solution for the Colts’ defense as their second drive mirrored their first. Buena took over at midfield after another short punt. A 44-yard run by junior running back Tory Walters put the Colts at the Tigers’ 3-yard line. Quarterback Jovoni Borbon kept the ball and maneuvered his way into the endzone to bump Buena’s lead to 12-0, after the missed point after attempt, with 7:54 to play in the first.

The Tigers caught the Colts off guard on 4th and 14 and completed a pass play up the middle to move the chains and into the red zone for the first time. Marana called a timeout to regroup ahead of the next play, but it was Buena’s defense who had the answer. The Colts forced a fumble which was recovered by senior Damian Brown and gave the home team possession with just over three minutes to play in the quarter.

On the next play, Walters broke through the line for an 80-yard score.

The made point after put Buena ahead 19-0 late in the first frame. The junior finished the game with 142 yards rushing on five carries.

Buena’s offense didn’t spend much time on the sideline, as an interception by Rhubin Harris gave the Colts one more opportunity to add to their lead before the second quarter. With one minute on the clock, Buena boosted their advantage to 26-0 after Borbon hit Kemish Riley for a 20-yard touchdown.

“Defensive coordinator Lawrence Boutte did a great job calling defense for us tonight and our playmakers made plays,” Thomas said. “I’m proud of these boys.”

Buena tacked on three more touchdowns in the second quarter. Borbon scored his second of the night and he picked off the Marana quarterback, which lead to another score by the Colts. With time winding down in the half, Borbon connected with Keyon Taylor for a 49-yard touchdown. The completed point after attempt put Buena ahead 49-0, which the carried into halftime.

The Colts defense continued to cause trouble and stall the Tigers offense in the second half. Walters collected the team’s third interception of the night and returned it for six points. Taylor found Jesse Avina for the extra two points. Buena led 56-0 with 7:06 to play in the third.

Marana ruined Buena’s hopes for a shutout with 34 seconds left in the third as they scored on a 50-yard pass play. A bobbled snap prevented any extra points from being added to the scoreboard. Buena held a 56-6 advantage heading into the final 12 minutes.

Another turnover by the Tigers led to another score for the Colts in the fourth quarter. A 12-yard run by Brown gave the sophomore his second touchdown of the game. Buena was able to complete the 2-point conversion to make the score 64-6.

“We just have to keep plugging away from here,” Thomas said. “We have a very important matchup next week against Cienega and we are going to prepare to win. We are very excited.”