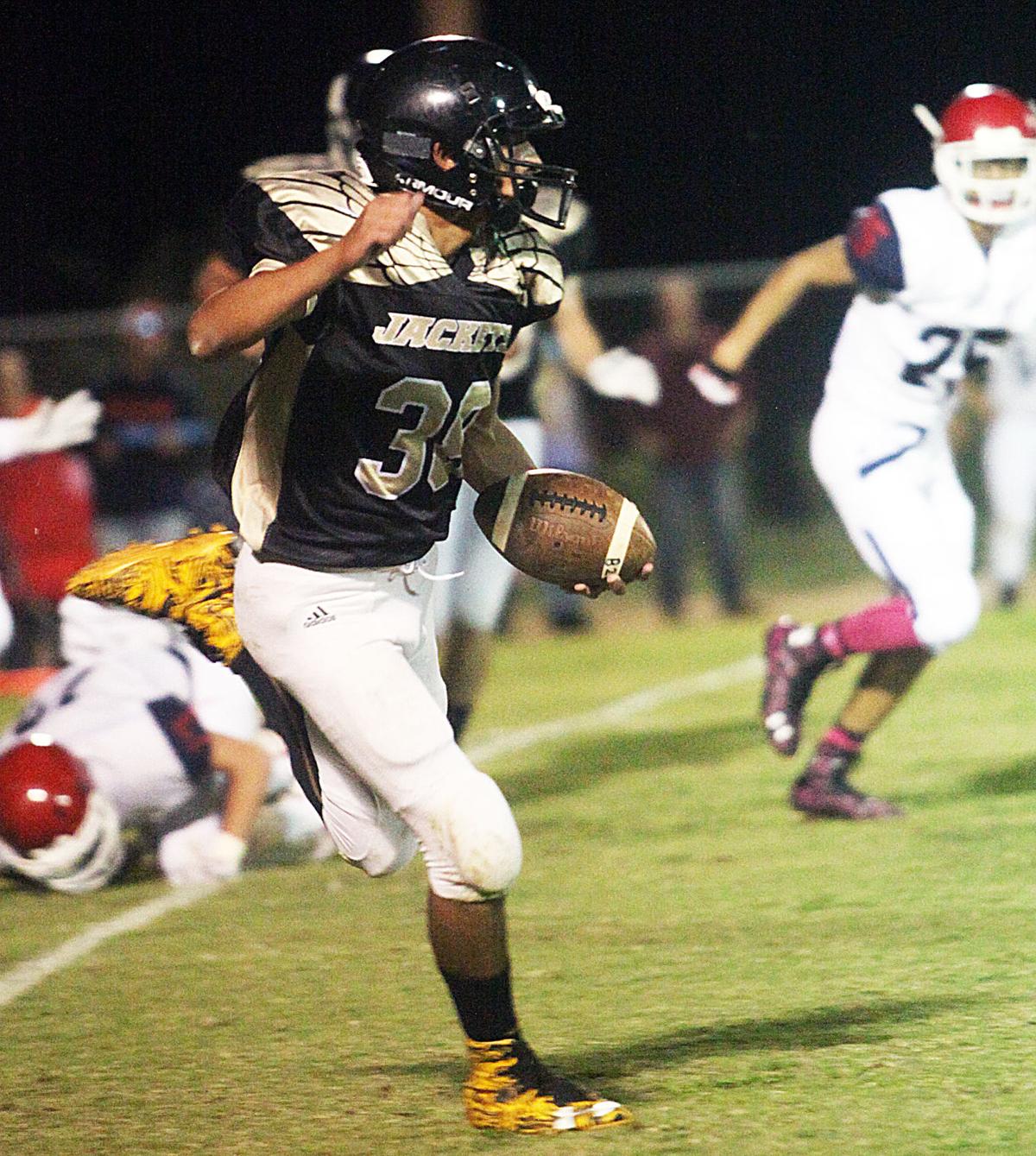 Tombstone running back Jacob Bonilla had 17 rushes for 119 yards and a touchdown in Friday’s game against Santa Rita. 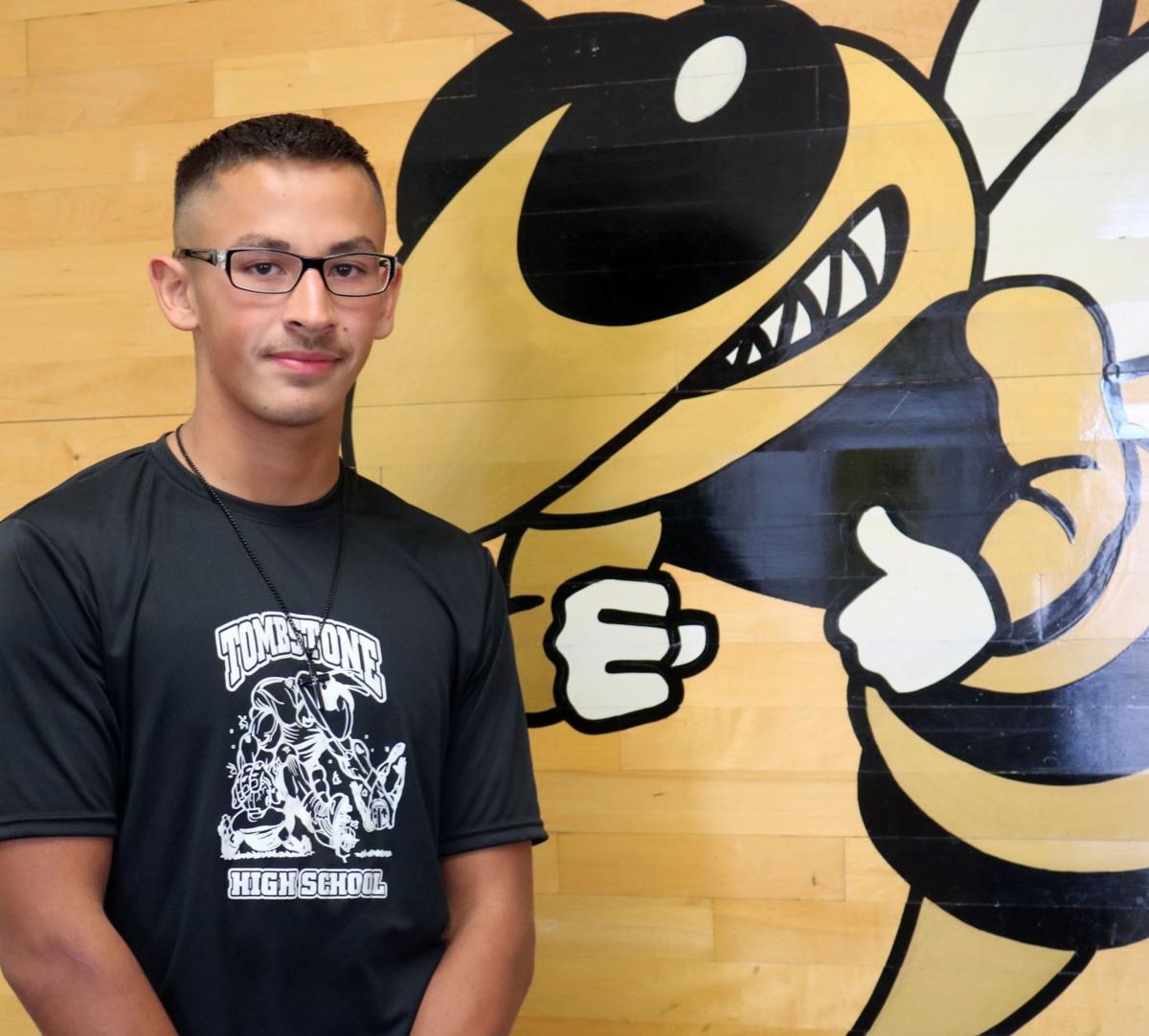 Jacob Bonilla is in his second year at Tombstone High School after he and his family moved to Sierra Vista from North Carolina at the start of his junior year.

Tombstone running back Jacob Bonilla had 17 rushes for 119 yards and a touchdown in Friday’s game against Santa Rita.

Jacob Bonilla is in his second year at Tombstone High School after he and his family moved to Sierra Vista from North Carolina at the start of his junior year.

TOMBSTONE — Jacob Bonilla wouldn’t have found his passion if it wasn’t for his dad.

“He’s the one who gets up to workout, ... he’s the one that put us in football,” Bonilla said of his father.

Bonilla began playing football when he was 6 years old, when his dad put him in flag football. He then moved onto play tackle football and fell even more in love with the game. With the help of his dad, Bonilla is one of Tombstone’s key players in his final season. In the offseason, leading into his final year, Bonilla said he worked on his speed and gaining muscle because he wanted to be better and faster.

Game after game Bonilla leads the Yellow Jackets in tackles and rushing yards as a force on offense and defense. He led his team with eight tackles and 119 rushing yards on 17 carries in Tombstone’s seven-point win over Santa Rita last week.

“I’ve always been a defensive player,” Bonilla said. “I like to make plays. I like to change the game.”

The senior is making the best of his final season even though it hasn’t gone as he had hoped. Tombstone is currently 2-6 overall with two games remaining.

“I was expecting (myself) to have a good season,” Bonilla said. “It’s upsetting. It’s my last couple of games, but it’s exciting completing high school.”

Through the turbulence that has occured this season, Bonilla was able to work on his leadership skills since most of his teammates are underclassman. He admits he has never been a leader on a team he’s played on, but he has enjoyed helping his teammates improve their game as well as work on his own.

Bonilla decided to stick with football because he was good at it, and as time passed the game turned into a family contest, as his two younger brothers also play football.

“On Fridays it’s my game, on Saturdays it’s (my brothers’) game and on Sundays we watch it,” Bonilla said.

The teenager doesn’t mind being consumed by football and admits that once the season is over, he’s thinking about next year.

Bonilla moved to Sierra Vista at the start of his junior year from North Carolina, but the adjustment was a bit easier as his name was familiar to those in the Tombstone halls.

Bonilla chose to be a Yellow Jacket because his uncles played there and were coached by David Thursby, who is the current principal at Tombstone. The sense of familiarity and having people who knew his family made the transition easier for him.

“I like that everybody knows each other,” Bonilla said.

With time fleeting on his high school career, Bonilla isn’t sure what he will be doing next year. But he hopes it includes football.