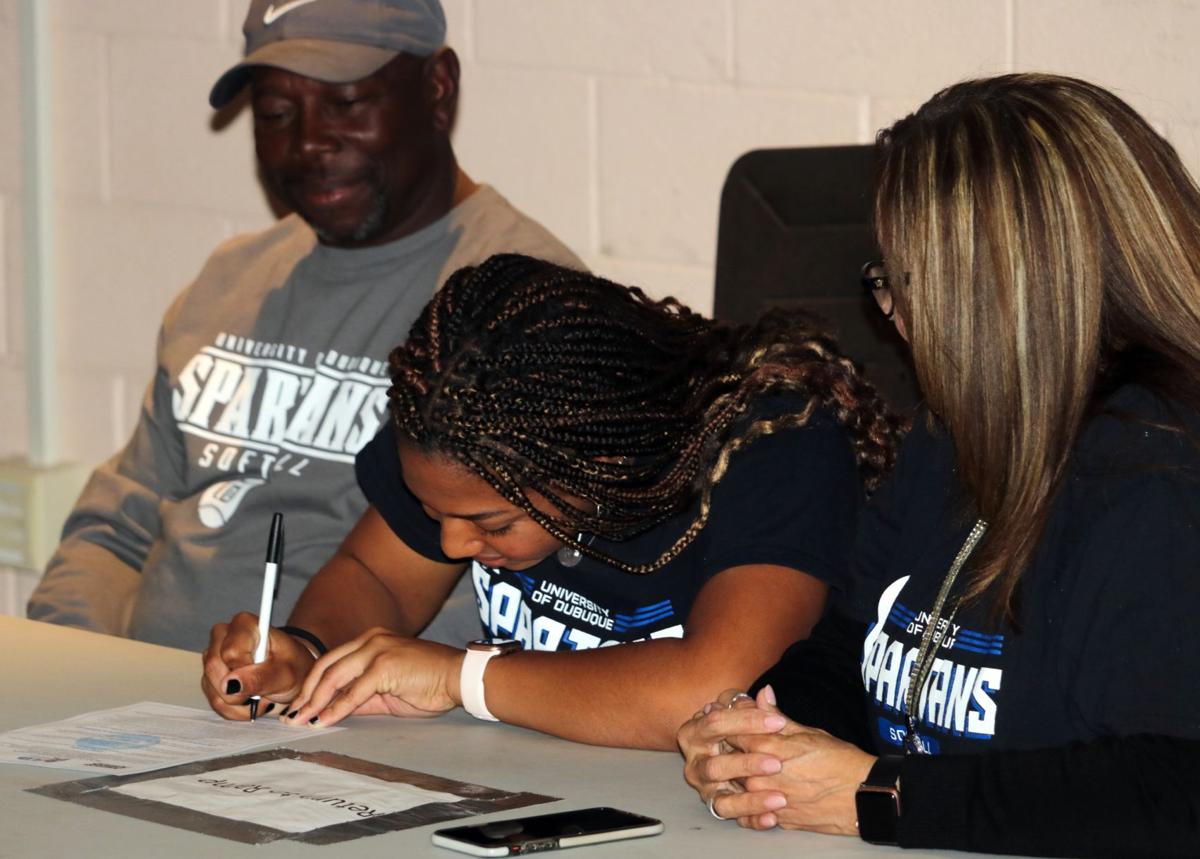 Lauren Brown signed to the University of Dubuque in Iowa on Monday at Buena High School with her parents by her side. 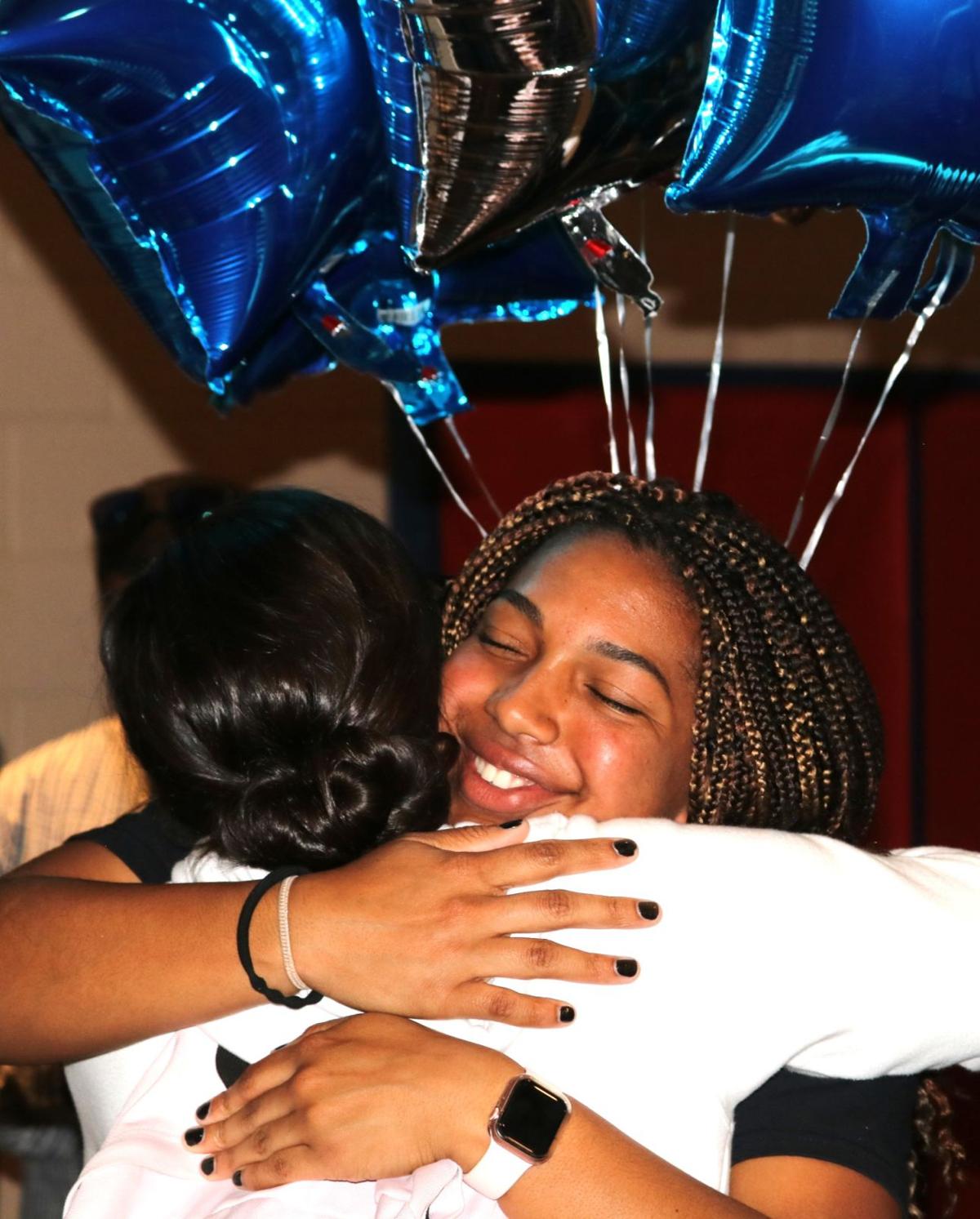 Lauren Brown hugs a friend who congratulates her at her signing on Monday.

Lauren Brown signed to the University of Dubuque in Iowa on Monday at Buena High School with her parents by her side.

Lauren Brown hugs a friend who congratulates her at her signing on Monday.

Lauren Brown is known for her big bat and when when she steps onto the field, Brown gets this “yes” feeling, like that is where she’s supposed to be.

The senior was reminded of how her skill on the softball field caused her to be an inspiration to her teammates and younger players during her signing ceremony.

Brown signed to the University of Dubuque in Iowa on Monday at Buena High School in front of friends, family and teammates.

“I love this sport and I’m glad I get to keep it for the next four years,” she said.

Brown toured multiple schools in the midwest and fell in love with the small town atmosphere where the Division 3 school is located. She said the small town vibe reminded her of Sierra Vista.

“It’s beautiful,” Brown said. “I felt at home when I was there.”

While her parents and friends are sad she’s moving more than a thousand miles away, Brown has no fear for the colder weather and is exactly where she wants to be. She said after signing that she knew she wanted to be in the Midwest because she wanted to be closer to her brother, who lives in Wisconsin.

“I didn’t want to leave but I knew that I had to (to better myself),” Brown said.

She plans on studying special education with the hopes of becoming a teacher. Brown may know where she’s going to be after graduation in May, but in the meantime she has one final season of high school softball to play, which her former coach Shuryl Magargee reminded her.

“This lady has a lot of talent,” Magargee said Monday. “It’s an honor to be here and watch her sign to continue her (career).”

Brown first started playing softball when she was 5 years old. Her mom put her in the sport to give her an activity in which to participate. Since then, the Sierra Vista resident has been hooked.

“You do something long enough and it becomes part of you,” she told the Herald/Review last year. “There’s still a drawing factor to it and I love the game.”

Her passion for the sport isn’t surprising as her mother played the game when she was younger and her father joined a slow-pitch league because he loves the game. Brown has made her way around the diamond, having played in the outfield, second base and now shortstop for Buena.

Her versatility and strength as a hitter are what attracted college coaches to her. Brown said she is slated as a shortstop for Dubuque, however, has been told since she can play multiple positions she will move around. She admits she hopes she can move to the outfield in college, since that’s the spot she likes the most.

When she’s not in Buena blue, she swaps jerseys for her travel team. She has played for the local teams as well as travel teams out of Tucson.

Brown’s success wasn’t handed to her but earned through the hard work she put it in, even in the offseason and extra practices during the high school season.

“She has a laid-back personality and is almost always smiling,” Magargee told the Herald/Review last season. “She takes softball seriously (and) when something isn’t working for her, she does get frustrated and goes and works on it.”

Brown’s hard work and effort is what multiple junior varsity players said they look up to and hope to emulate.

“Her heart is set on helping people,” Magargee said a year ago. “She does that in practice. Lauren Brown is a great kid. I have watched her mature from a freshman to the young lady she is now.”