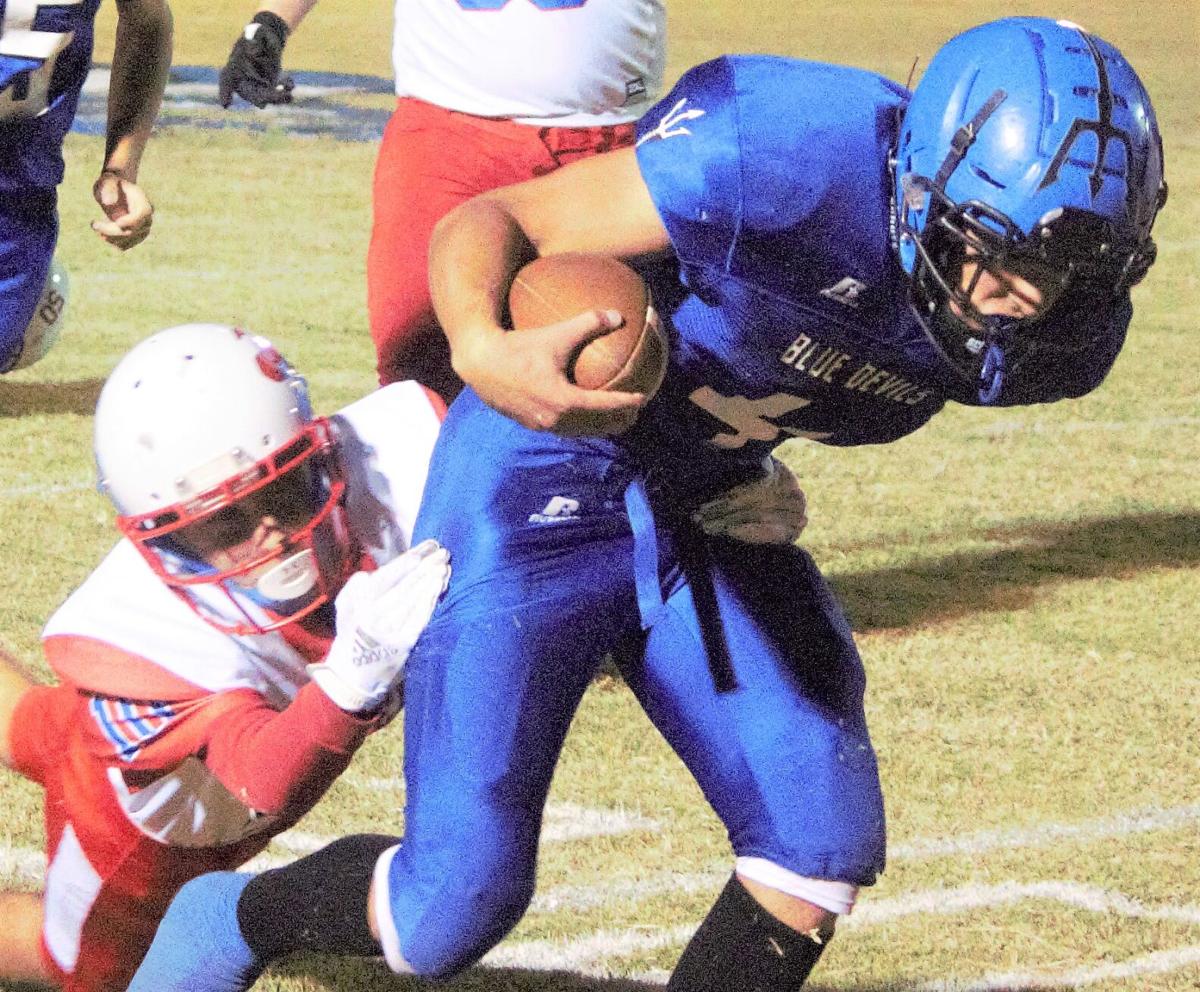 Sonke's 532 rushing yards against Mohave Accelerated is a new 1A state record for rushing yards in a single game. He also had seven touchdowns in that game. 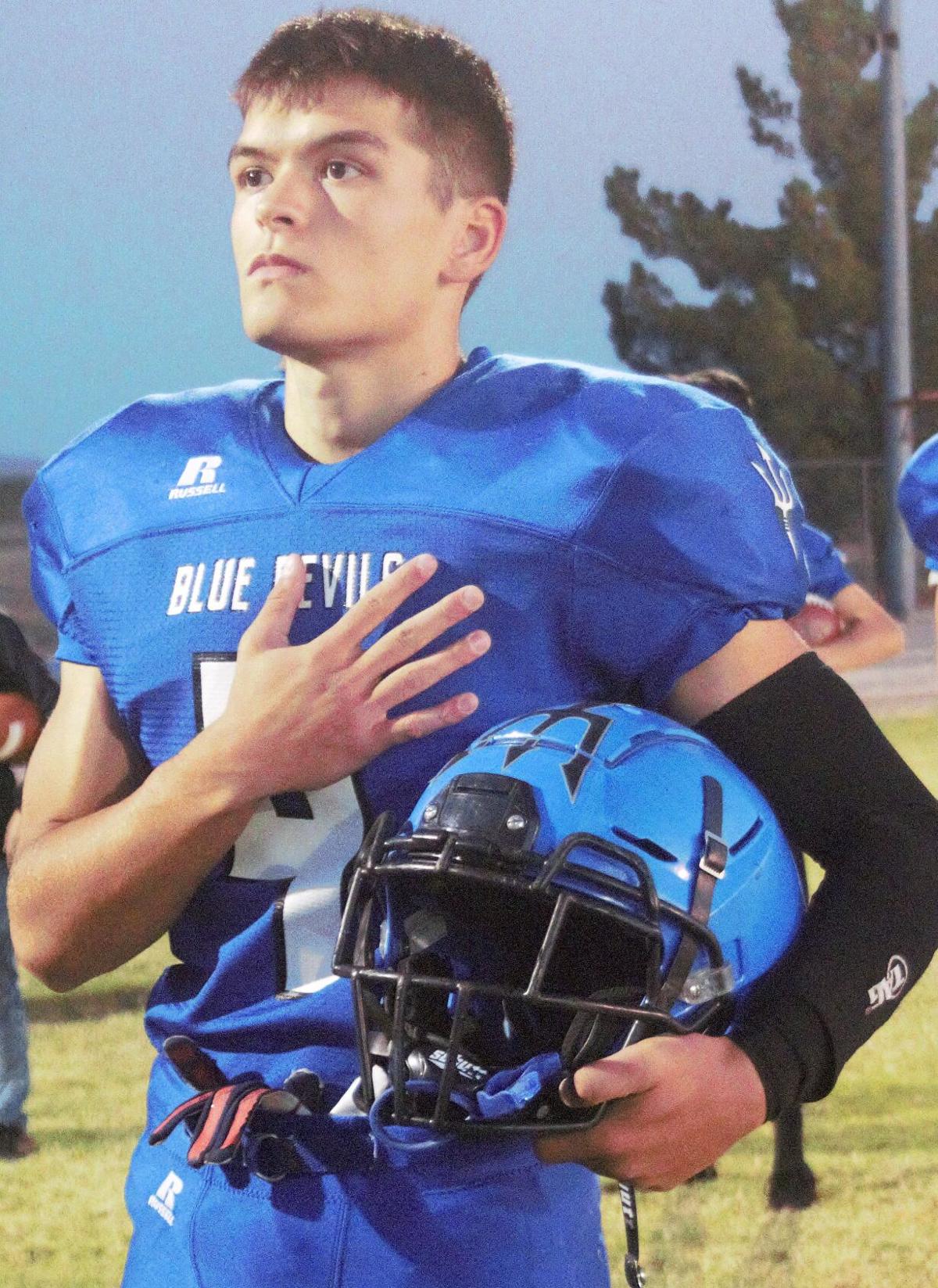 Jacob Sonke has only been playing football since his freshman year at high school.

Sonke's 532 rushing yards against Mohave Accelerated is a new 1A state record for rushing yards in a single game. He also had seven touchdowns in that game.

Jacob Sonke has only been playing football since his freshman year at high school.

The path to Valley Union running back Jacob Sonke’s state record setting performance has not been an easy one.

There have been two times this year where the two-year team captain for the Blue Devils, wondered if he would even have a senior season.

The first came during the off season when the Arizona Interscholastic Association was trying to determine whether or not there would be a high school season due to the COVID-19 pandemic.

When the teams were finally given the okay to begin practice and an abbreviated schedule was announced, Sonke was excited and looking forward to the season opener with Superior.

Four minutes into that game, Snoke took a hit that resulted in him being carried off the field on a stretcher with what many believed was a season ending arm injury.

Hours later good news came. Sonke’s arm was not broken and he was cleared to return to play the following week against St. David.

“When I got hit (against Superior) I was really hurting,” he said. “I was sad because I thought my last year here was over. When I found out my arm wasn’t broken I became angry because I shouldn’t have been carted off the field.”

Valley Union coach Brandon Gilbreth said when he saw his running back lying on the field in pain his focus first was for Sonke but in the back of his mind he was also wondering how he was going to fill the huge void that was being created by Sonke’s loss.

Not only did he play offense, defense and special teams that game, the senior started for the Blue Devils against St. David.

On Saturday, Oct. 17 Jacob was in Chandler with his team preparing for a game with Mohave Accelerated. Going into the game Sonke said he really didn’t have any idea of what was about to happen.

“My focus going into that game was doing all that I could to help us win the game,” he said.

The Valley Union running back etched his name into the record books that afternoon, carrying the ball 34 times for 532 yards. He scored all seven touchdowns for his team in a wild 48-44 win, the first of the season for the Blue Devils.

His performance broke the 1A single game rushing record set by another Valley Union Blue Devil, Ozzie Anaya in 1985, who ran for 477-yards in a win over Bowie. Sonke’s 532-yards is also currently the second highest single game performance 1A-6A; the highest being 566 yards set by Ethan Johnson of Mesa Westwood in 2015.

“I couldn’t have broken the record if it wasn’t for my linemen blocking for me,” Sonke said. “They really helped me out.”

He said at no point during the game was he ever keeping track of his stats and it wasn’t until afterwards he was made aware of what he had accomplished.

“When my coaches told me how many yards I had and that I had scored seven touchdowns I was surprised,” he said. “At first I didn’t think anything of it. I was just happy to get the win. It was actually my dad who told me that I had set a state record.”

Sonke, 17, the son of Lorena and Gary Sonke, has a twin sister Lizet. They are the youngest of seven children.

Both are three sport athletes at Valley Union and amongst the top students in their class.They have already been awarded full tuition scholarships to Northern Arizona University.

“I’ve been thinking about becoming a nurse,” the senior said. “My mother is a pediatric nurse at TMC. I really admire the work that she does.”

The three-sport athlete for Valley Union says football is his favorite and he would welcome the chance to have the opportunity to play football at the next level.

“If given the chance it’s something I would definitely consider,” he said.

Sonke didn’t even begin playing football until his freshman year.

“My mom encouraged me to go out,” he said. “She thought it was something I would enjoy. I did, so I kept playing.”

Of all the aspects to the game Jacob Sonke says he really enjoys hitting people and would prefer playing linebacker more than anything else.

“I don’t mind playing both offense and defense but if I had to choose one over the other I’d choose defense,” he said.

Throughout his high school career Sonke has played under three different head coaches at Valley Union. Despite the changes and being a part of a small school, Jacob Sonke likes being a Blue Devil.

“It’s pretty special when your best kid is your hardest worker,” Valley Union football coach Brandon Gilbreth said. “I’ve helped coach Jacob for several years. I believe every other player on this team looks up to Jacob.”

Assistant coach Dusty Vasquez added Jacob is the type of player who leads by example.

“I think that’s why the other kids on the team look up to him the way they do,” he said.

Jacob Sonke credits his parents for his work ethic.

“They have taught me to give it my all no matter what even if I’m not the best,” he said. “My older brother Luis has taught me a lot about playing running back and how to hit.”

Gilbreth added Jacob’s success on and off the field is a testament to the kind of student athlete Jacob Sonke is.

“He’s the type of kid that every coach would dream of having on the team,” Gilbreth said.