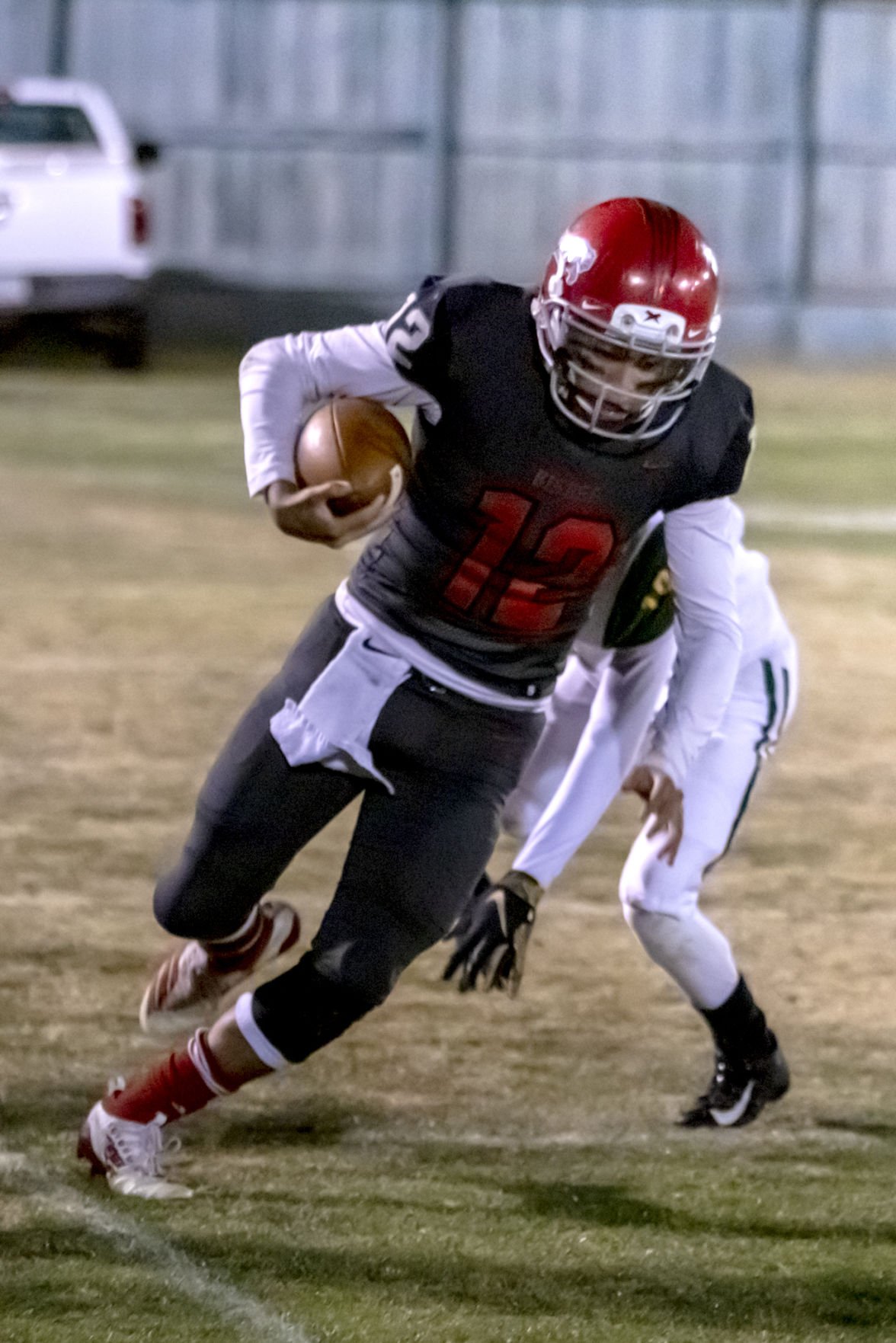 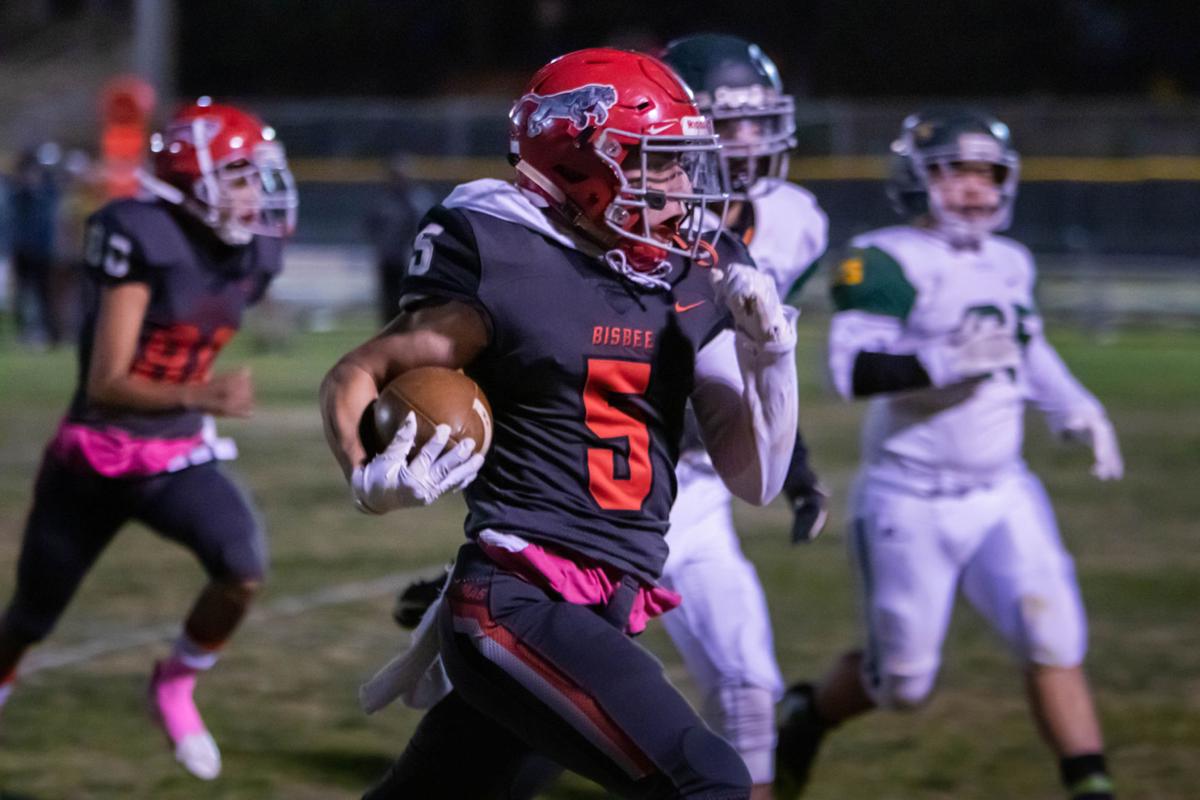 The Pumas’ Hunter Perry races down the field at Warren Ballpark during Bisbee’s Friday night win against Santa Rita. 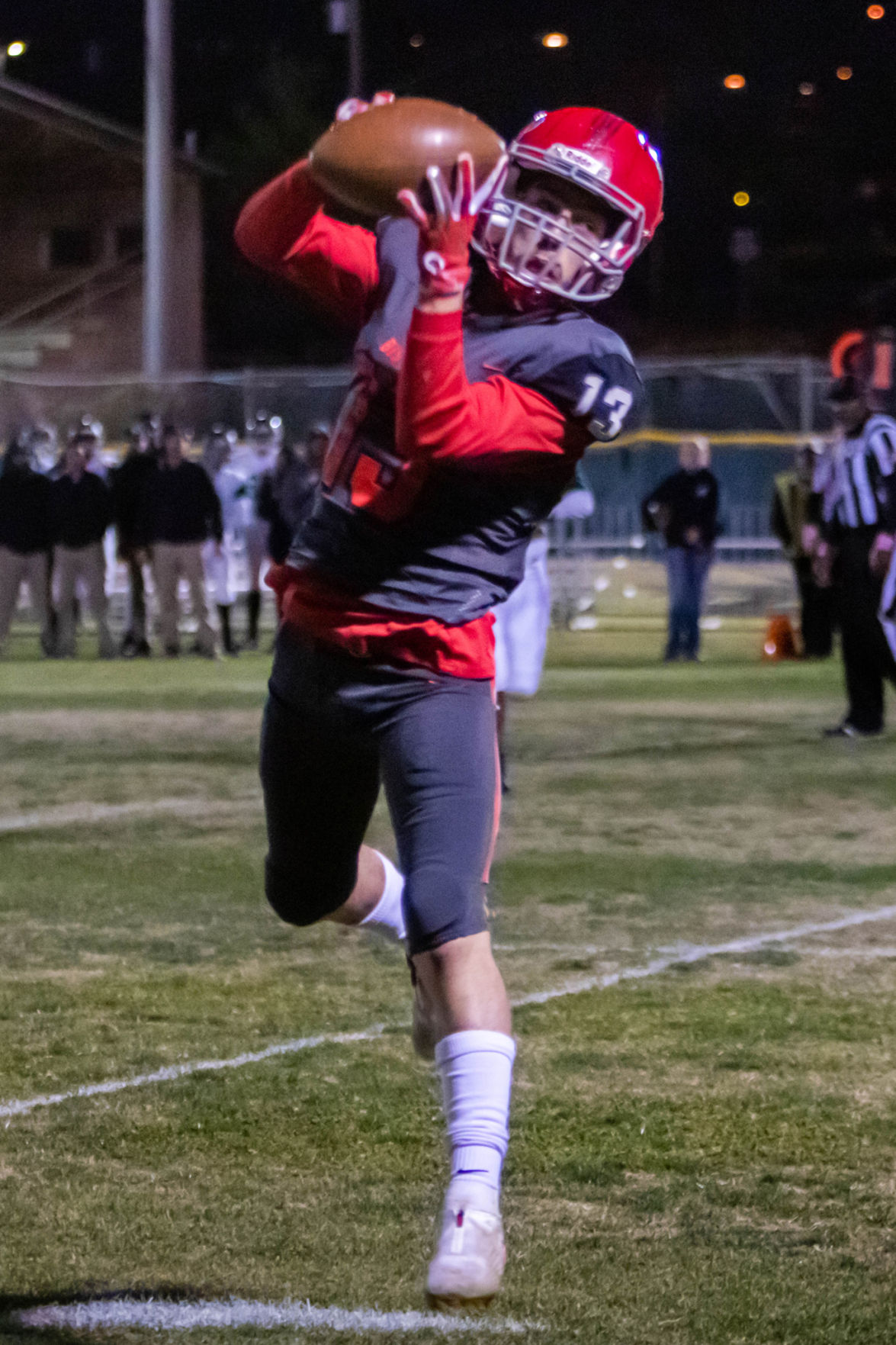 Pumas wide receiver Dano Lopez has his eye on the goal line during Bisbee’s game against Santa Rita. 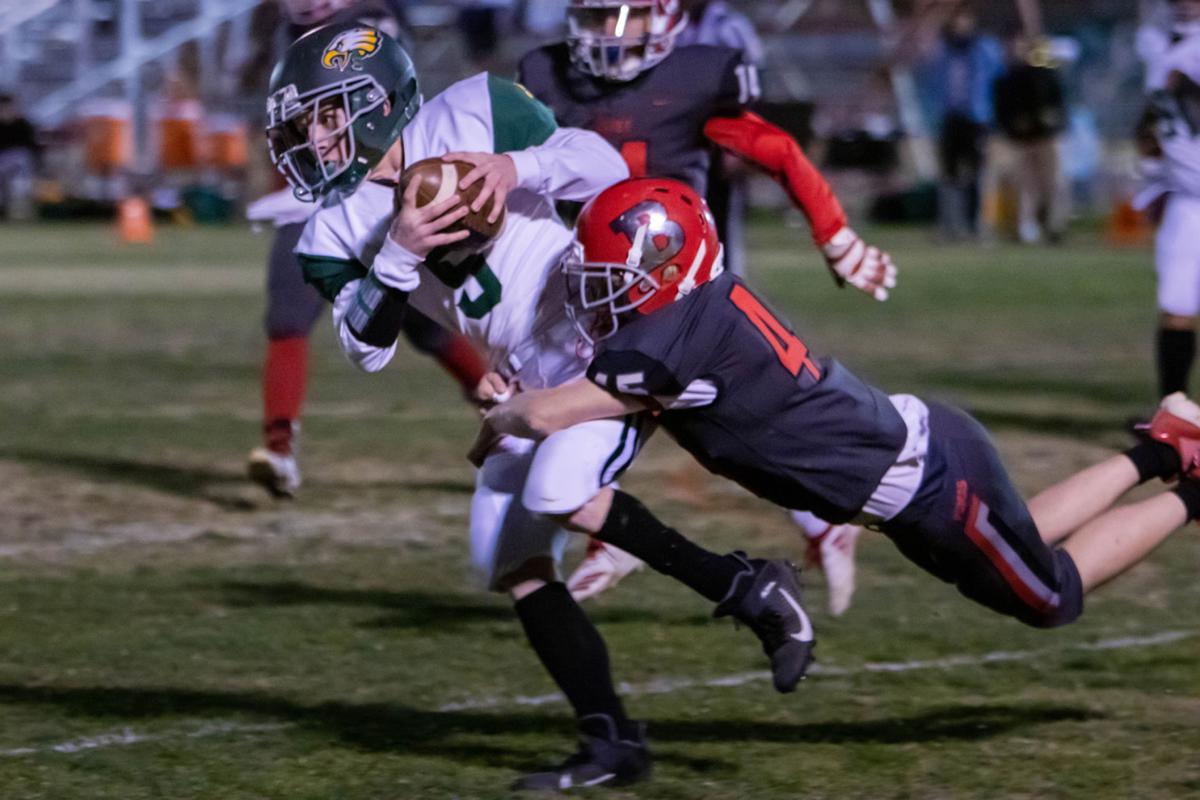 Pumas inside linebacker Cody Rickitson sails in for the sack during Bisbee's Friday night win against Santa Rita at Warren Ballpark.

The Pumas’ Hunter Perry races down the field at Warren Ballpark during Bisbee’s Friday night win against Santa Rita.

Pumas wide receiver Dano Lopez has his eye on the goal line during Bisbee’s game against Santa Rita.

Pumas inside linebacker Cody Rickitson sails in for the sack during Bisbee's Friday night win against Santa Rita at Warren Ballpark.

BISBEE — A strong first quarter by the Pumas put them in position to win their seventh game of the season Friday night. Bisbee defeated Santa Rita 40-20 in their final home game of the regular season to improve to 7-2.

“Overall I think we came out fast, which was important,” Pumas head coach Brian Vertrees said. “We played hard and we didnt turn the football over. We are going to have to be playing our best football in a couple weeks, so those are good signs.”

Bisbee struck first, less than four minutes into the game, on a five-yard run. The made extra point gave the Pumas a 7-0 advantage. Their offense didn’t have much of a break as Manny Amya recovered Bisbee’s onside kick attempt. Hunter Perry capitalized on the short field with a 46-yard rushing touchdown for the home team. The extra point was awarded to the Pumas, despite being missed, after a roughing the kicker penalty was called against Santa Rita which bumped Bisbee’s lead to 14-0 with 8:16 to play in the first quarter.

The Puma defense didn’t allow the Eagles to generate any offense in the first half and their stops on fourth down gave their offense good field position drive after drive.

Perry scored his second touchdown in as many minutes midway through the quarter on a 37-yard run. Bisbee went ahead 20-0 after the point after attempt was missed, and would take that lead into the second quarter.

Bisbee scored the lone touchdown of the second quarter with 6:23 on the clock, with senior RJ Wright hitting senior wide receiver Dano Lopez for a 10-yard score. The point after attempt was missed once again but the Pumas led 26-0 at halftime.

The Pumas have been led by their seniors all season and recognized them ahead of Friday’s match up. Although this was their last time playing at Warren Ballpark, Vertrees is reminding them their high school football career isn’t over quite yet.

“As far as our seniors, it’s a great group of young men with some really positive chemistry,” he said. “We have to focus on getting better because how far we go in the playoffs is ultimately dependent on them.

“I’m really proud of these seniors and everything they have put in to this program, but I’m gonna continue to remind them that we aren’t done. There is still a lot of football to be played.”

Bisbee added to their lead in the third quarter when Wright hit Amaya for a 19-yard touchdown. The extra point made gave them commanding 33-0 lead.

However, the Eagles didn’t fly away. They broke Bisbee’s shutout attempt seconds into the final frame with a two-yard touchdown through the air. Santa Rita was stopped on the 2-point try which made the score 33-6. Bisbee responded 30 seconds later with a 34-yard rushing touchdown by David Ballesteros and the made point after attempt increased their lead to 40-6.

Time was not on the Eagles sides, but they tacked on two more touchdowns late to their score to bring them within 20 points of the Pumas.

No. 11 Bisbee travels to Tombstone on Friday for their final game of the regular season.