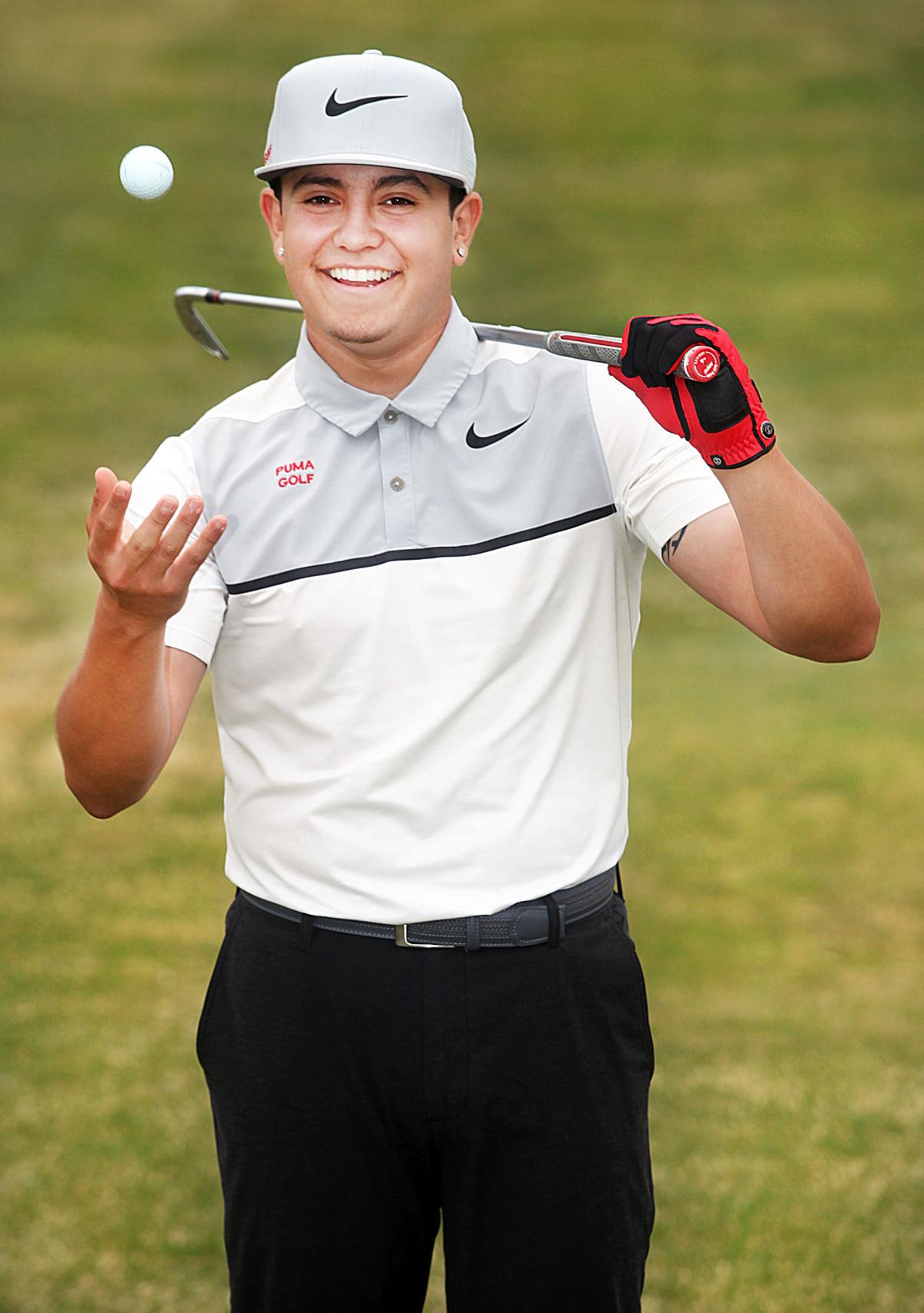 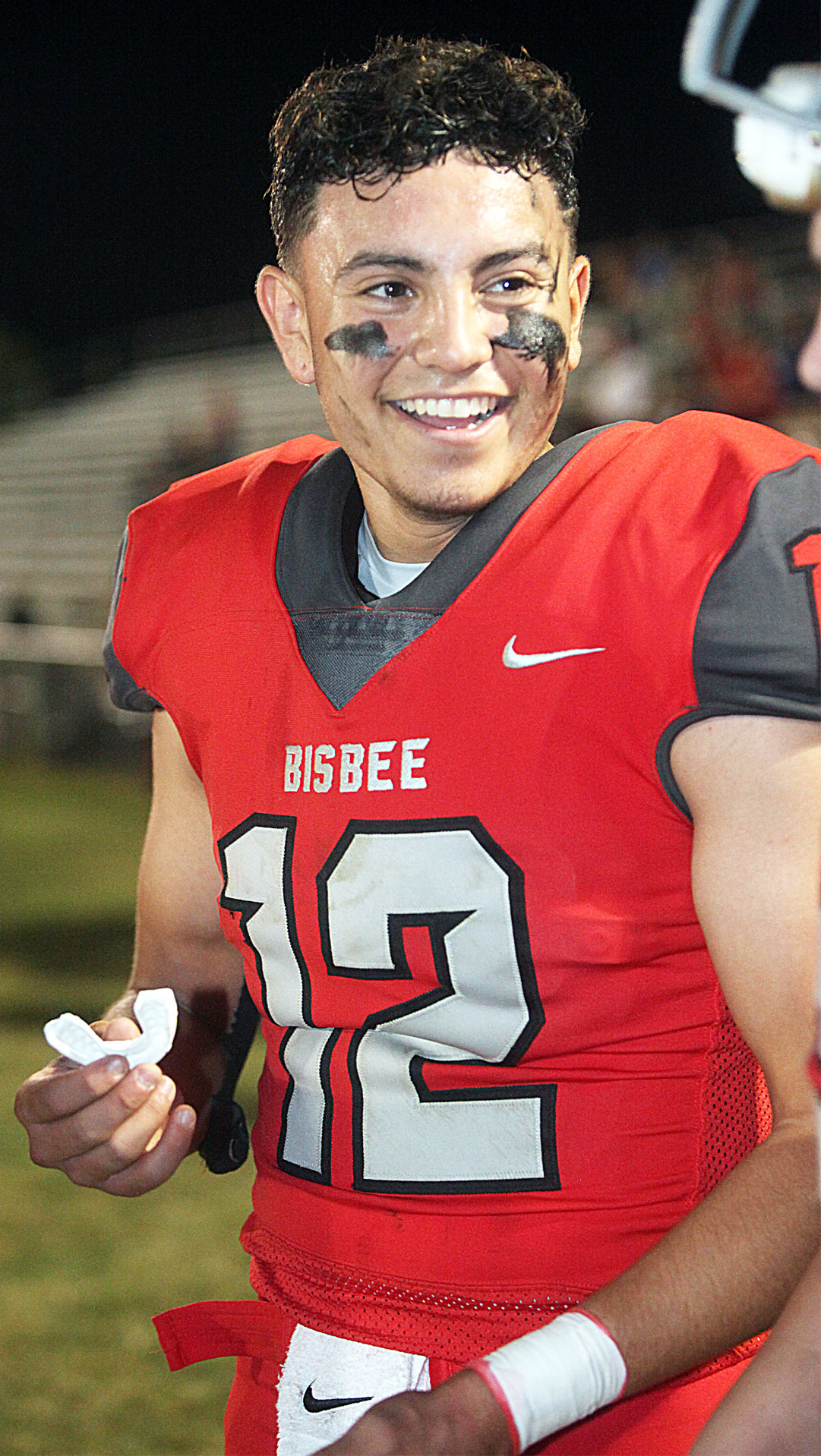 An upbeat RJ Wright shares a happy moment with a teammate while on the sidelines. Wright led the Pumas to an 8-2 record last season.

An upbeat RJ Wright shares a happy moment with a teammate while on the sidelines. Wright led the Pumas to an 8-2 record last season.

RJ Wright has spent most of his life on fairways and greens across the state. His dedication and passion for golf has led him to be one of the top high school golfers in Arizona.

The senior is leading his team this season, shooting an even par last weekend in Thatcher and 3 under in Benson last week.

“This year I feel like it’s all on me,” Wright said “I’m going to try to shoot the best I can to help my team as much as I can.”

“It’s heartwarming to put (Bisbee’s) name out there,” Wright said. “I’m trying to win state, which hasn’t been done (at Bisbee High School). It’s been my goal, especially this year being my senior year I want to make something big (for Bisbee).”

Wright first starting playing golf 14 years ago when he would go to Turquoise Valley Golf Course in Naco with his great-grandfather. The senior said he doesn’t remember much of how he got started, but said it was his great-grandfather who put a club in his hand and gave him his first interactions on the course. At 6 years old he received his first set of clubs and participated in his first tournament, which he won.

“I want to say it’s one of the hardest sports mentally and physically,” Wright said. “I like the pressure. One shot can make a difference.”

At 8 years old, Wright hit his first and only hole-in-one. He said it took place on a day he wasn’t shooting well in Casa Grande and was shot 86-yards with a 9-iron.

Growing up Wright played football and baseball until he decided to pursue golf full time when he was 12. He said it was then he realized he had a future in the game, with the end goal playing in the the Professional Golf Association because he was winning all of the junior tournaments he was playing in.

Wright got a taste of what it’s like to be a professional at the Cologuard Classic, held in Tucson, as he was invited to participate in the Jose Cuervo Pro-Am. Wright was paired with Kevin Sutherland for a day and said he watched Sutherland’s behavior and how he carried himself on the course. He said he practiced the composure Sutherland had while playing in Thacher and noticed it helped him and his game.

“I thought I would be nervous,” Wright said about his experience. “But it definitely got me excited to get to my future.”

Wright will continue his golf career after graduation in May. He hasn’t formally signed to a school but he is leaning towards committing to South Mountain Community College in Phoenix because of they sit atop the junior college golf rankings and he gets to stay in Arizona which he wanted.

After community college he wants to attend a university and continue to play golf.

Outside of golf, Wright played quarterback for the Puma football team his junior and senior years. Last season he led Bisbee to an 8-2 record, a 71 percent completion rate, 1,276 passing yards and 14 touchdowns through the air.

The senior is proud of being a straight ‘A’ student, which he has maintained throughout high school.

“I have goals and I want to meet them,” Wright said. “And good grades is the best way to meet them.”