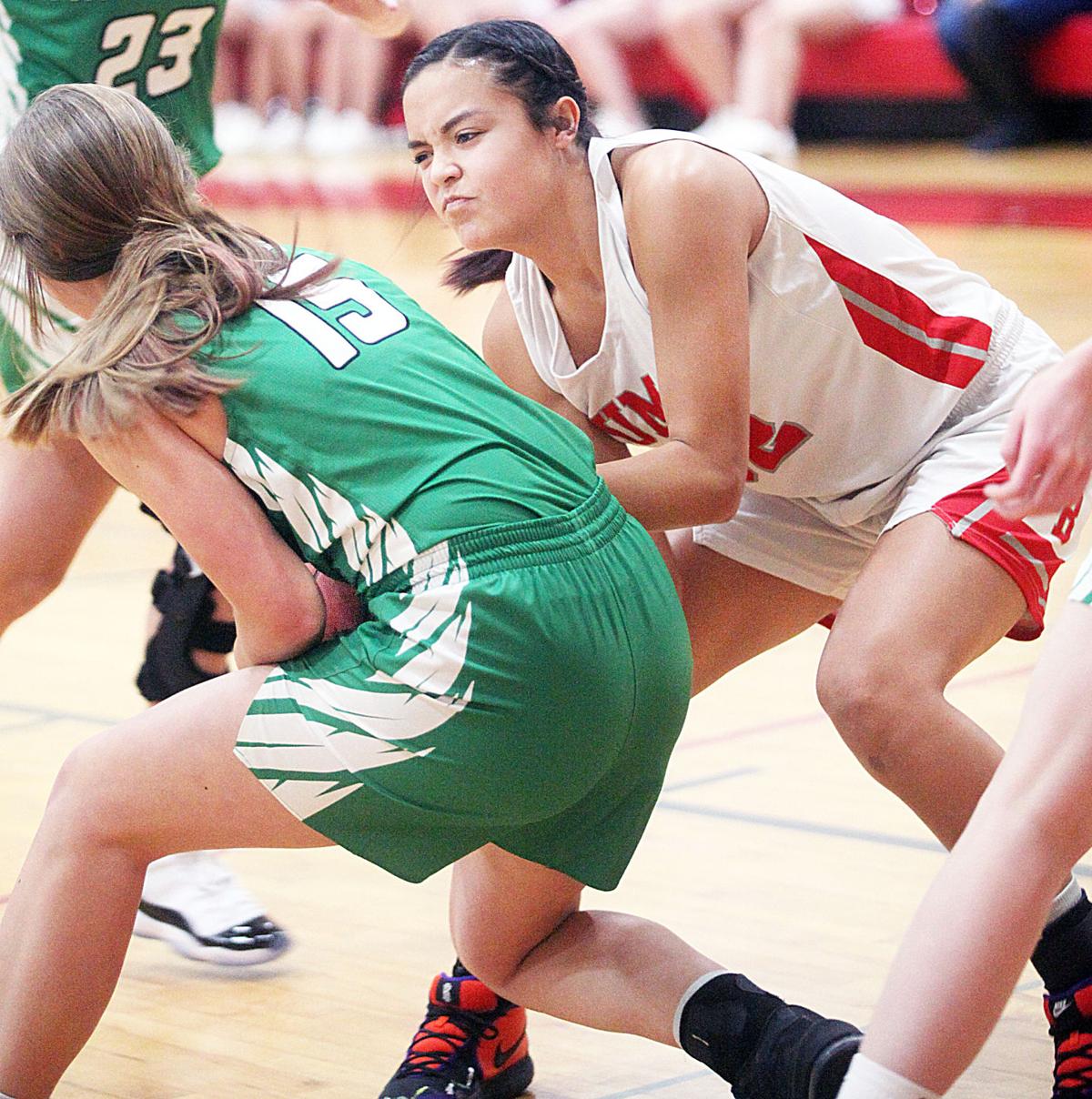 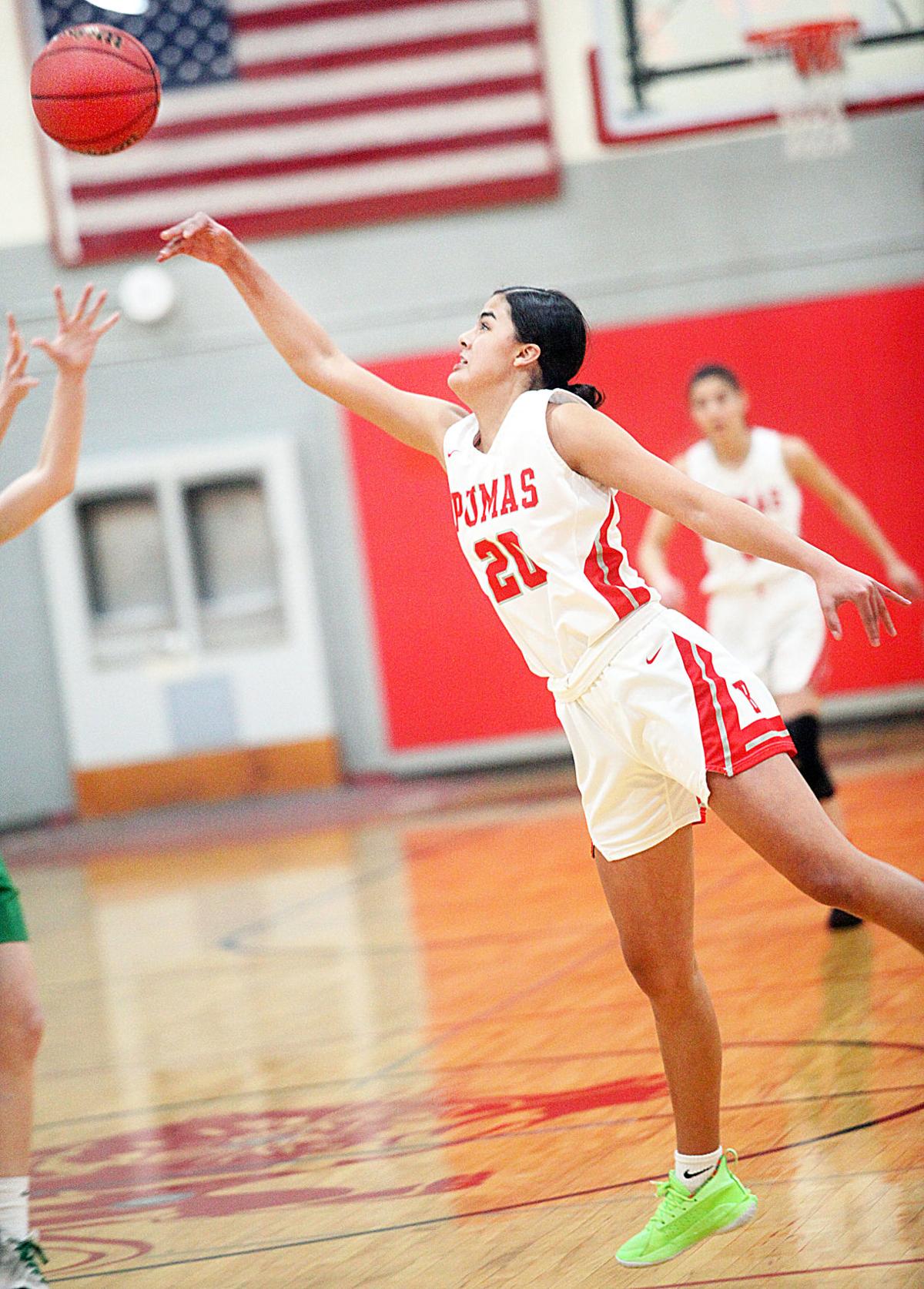 Gabby Lopez, freshman, tries for the steal in Friday’s game versus Thatcher.

Gabby Lopez, freshman, tries for the steal in Friday’s game versus Thatcher.

BISBEE — The Bisbee High School girls basketball team is no longer undefeated after No. 5 Thatcher upset No.2 Bisbee 51-45 in a back and forth battle on the Pumas’ home court Friday night.

Bisbee jumped out to a 7-0 lead less than three minutes into the game. Thatcher struggled to break Bisbee’s press defense which led to steals and uncontested buckets for Bisbee. A timeout by the Eagles allowed them to draw a new game plan for moving up the court and they scored their first bucket with 5:37 to play in the first quarter.

The Pumas offense continued to make their way to the basket on nice drives my Yasmin Morales and Gabby Lopez. Bisbee led 15-8 after the first eight minutes. Morales and Lopez scored 12 of Bisbee’s 15 first quarter points.

It was Thatcher’s turn to find their offensive rhythm in the second quarter. They took their first lead of the game, 19-18, with 3:17 to play in the half on a made free throw while holding Bisbee to just three points up until that point. The teams teetered back and forth on the scoreboard until Thatcher pushed ahead 24-20 with seconds left in the half. Melissa Villegas stormed up the court and hit a 3-pointer at the buzzer to make Bisbee’s deficit one point, 24-23, at the half.

Thatcher made adjustments in the first half to break the press and won the battle of the boards to complete their first half comeback. It was Bisbee’s turn to adjust in the second half, but foul trouble made the task a bit more challenging.

Bisbee scored the first bucket of the second half, which game them a one-point advantage, which prompted a seesaw with the lead until the 1:40 mark when the teams were tied 33-33. Like the ending of the first half, the Eagles scored to hold a 2-point lead with seconds left but Bisbee was able to answer with a 3-pointer. This time is was Lopez from almost half court who drilled the three and gave her team a 36-35 lead heading into the final quarter.

The fourth quarter was played with intensity like the previous two. Bisbee found themselves down by three in the early minutes but the deficit was erased by another 3-pointer by Villegas to make the score 39-39. Free throws kept Thatcher in the game and eventually gave them the lead late in the game. Bisbee was down again by three for roughly three minutes until a 3-point play by Morales tied the game 45-45 with 1:30 left in the game.

Two of the Pumas’ bigs fouled out in the second, one being Morales. Thatcher made their free throws in the home stretch to steal the win from Bisbee.

Bisbee is now 9-1 on the season with seven games remaining. They host Benson at 5:30 p.m. on Tuesday.