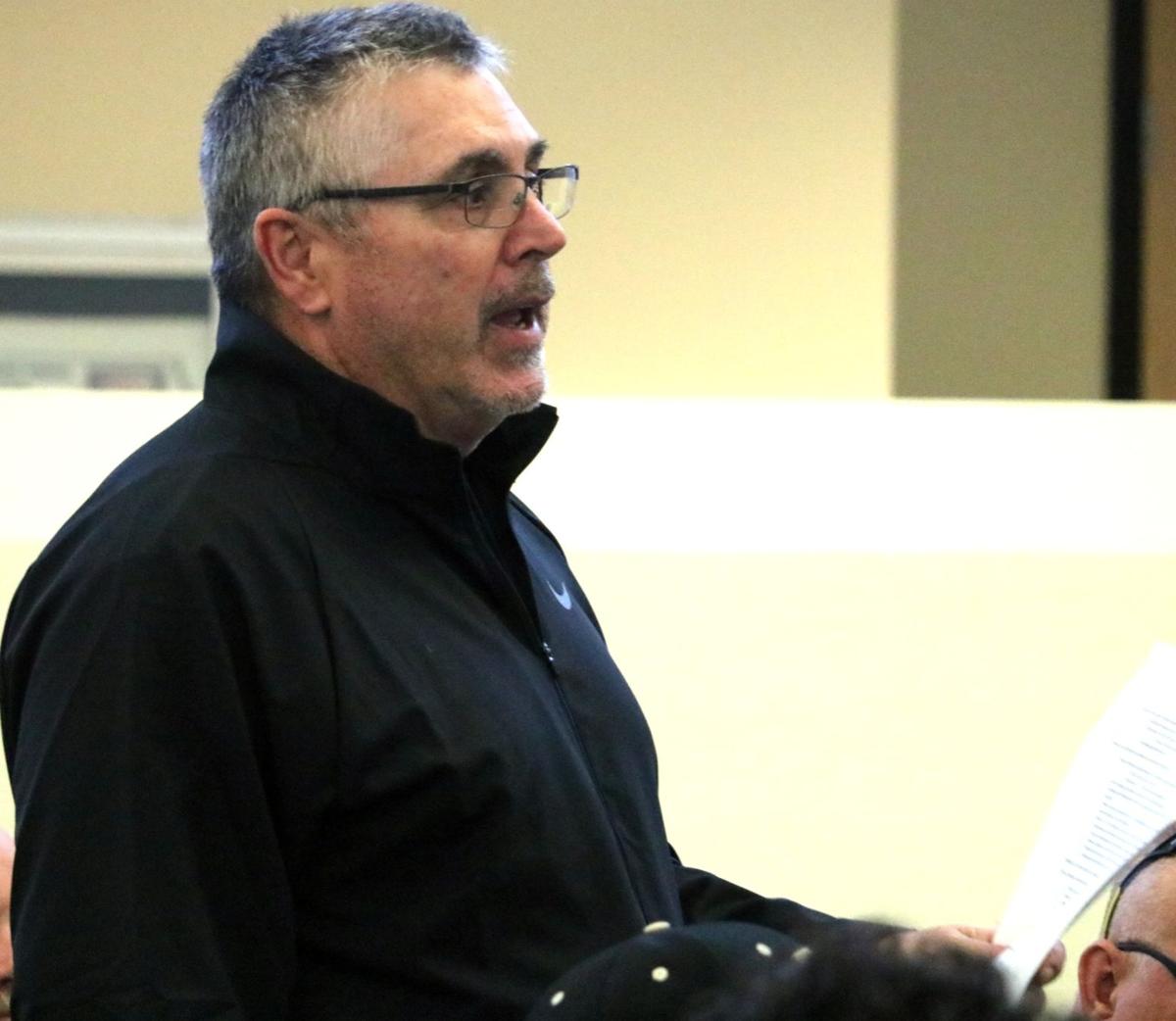 Tombstone head football coach Jerry Rhoades shares his concerns to the board on Wednesday. 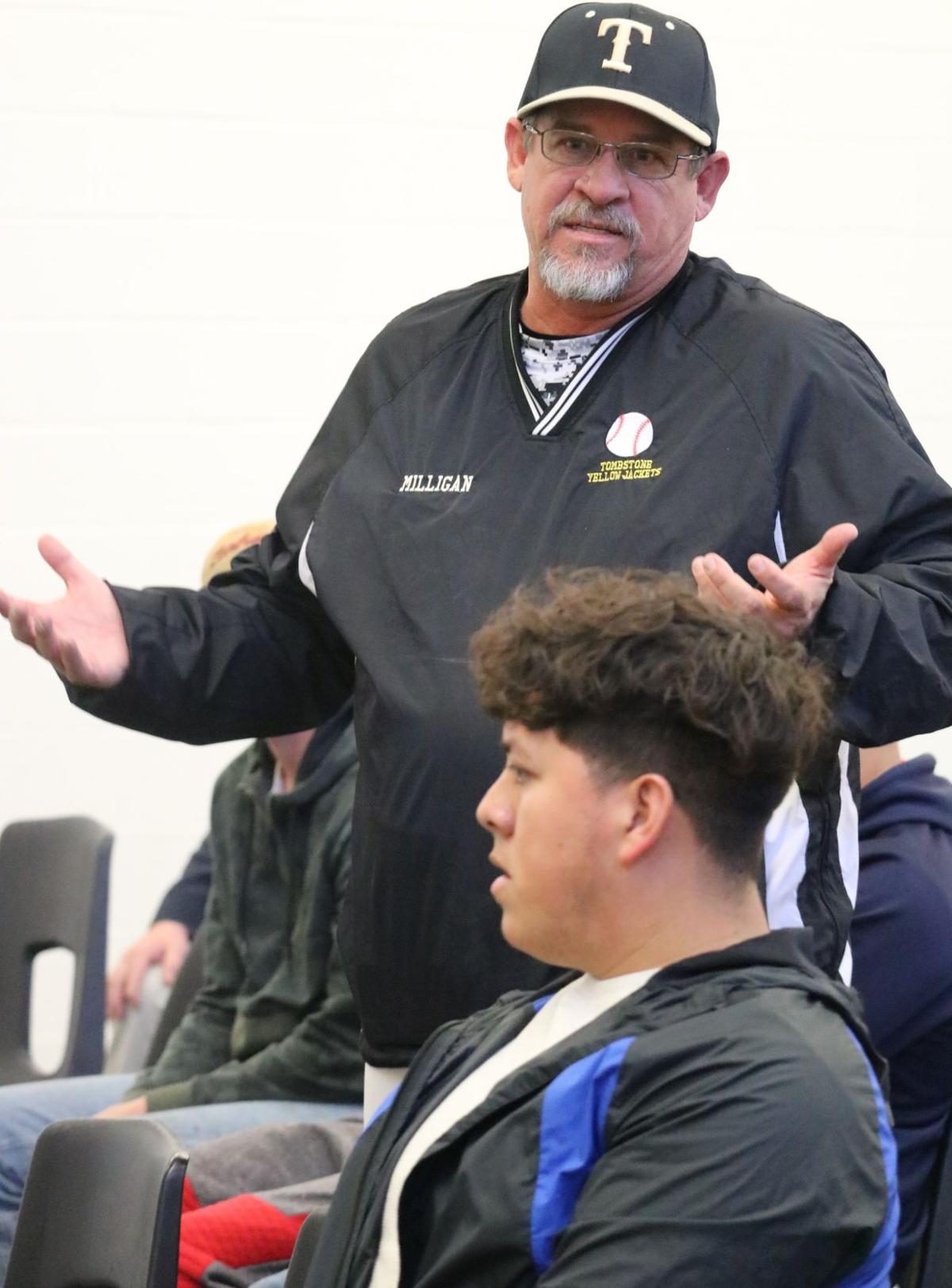 Coach James Milligan addresses the board and attendees of the work session.

Tombstone head football coach Jerry Rhoades shares his concerns to the board on Wednesday.

Coach James Milligan addresses the board and attendees of the work session.

TOMBSTONE — Bridging the gap between Huachuca City School’s and Tombstone High School’s football programs is what administrators and coaches feel will grow the high school program, which struggled to field a complete team last season.

Tombstone Unified School District’s governing board held a work session prior to Wednesday’s meeting to discuss the “support the district can provide” in order to help participation in football grow at the high school. Superintendent Robert Devere opened the meeting by saying 29 schools across the state canceled football teams, including junior varsity programs, this past season.

THS Principal David Thursby, Athletic Director Brian Miller and coaches Jerry Rhoades and James Milligan addressed the board with what they said is needed in order for the program can return to the high level of competition they one had.

“This program has had great success and is important to the start of the school year,” Thursby said on Wednesday.

According to Maxpreps.com, Tombstone football has had three winning seasons since 2004. The last time was the 2016 season when the Yellow Jackets were 7-5. This year the team finished with a 2-8 record in Rhoades’ first season as head coach at Tombstone.

One of the reasons the Yellow Jackets have struggled is the number of athletes that start and finish the season have dropped. Tombstone started the season with 21 players and played the last four weeks of the regular season with 14 players.

“I don’t think we as Tombstone face any other issues that any other school faces,” Rhoades said in regards to participation numbers dropping.

Rhoades and Miller told the board that attracting more players and getting them involved and staying eligible at the junior high level is vital. Huachuca City School is the “only feeder program” Tombstone High School has, as there isn’t local youth football in Tombstone, Huachuca City or Whetstone.

Efrain Galvez, the football coach and athletic director at Huachuca City School, said his numbers have increased over the last couple of years and he averages about 25 players to start the year. Last season he had 34 players out, which was the largest he’s had as a coach. Of the 34 players, 19 were eighth graders, but only 5 of the 19 made it through the season. The rest were ineligible.

Eligibility concernsIn order to be academically eligible, a student in the Tombstone Unified School District has to have a 69.5 and above in every class. Miller said a student may still be eligible if they have one D and no unexcused tardies or zeros in that class. A student has one week to pull their grade up, and if after that week there isn’t improvement, then they are deemed ineligible. Galvez said his policy is if a player on his team is ineligible for three consecutive weeks, he cuts them so they can focus on their education.

“We had tutoring every Wednesday during practice time,” Galvez said. “I wanted to give them every opportunity to play.”

On the “wishlist” Thursby asked the board to consider was academic help for the athletes at the junior high as well as a trainer at the high school so the athletes stay with the program rather than leave and come back two weeks later after they are cleared by a doctor. Tombstone High School implemented an academic counselor this year and only one football player did not play because of being academically ineligible.

Galvez said in addition to academic help provided by the school, parents need to be supportive of their child’s academics at home too. He said last year he sent home flyers and assignments that were often ignored my parents.

“Parents play a big role in the education of their child,” Galvez said. “They need support academically, like they do for sports.”

Another point of emphasis from the coaches was having more opportunities to improve for both teams, while integrating both programs. Rhoades wants to increase summer practices from two days a week to three days a week, which would require an additional day of transportation for the players.

They also want to participate in camps and 7-on-7 competitions, which other county schools like Buena and Benson do in the summer, to get extra practice and competition against other schools.

Miller said the goal for the camp is to help players with their fundamentals and become familiar with the high school players and staff before they become a Yellow Jacket.

Galvez, who coaches basketball and track in addition to football at Huachuca City School, said most of the kids he coached last year that are now freshmen at Tombstone are not participating in any sport. When asked why, he said the kids say it’s because they missed out on all the summer practices, which they feel puts them behind, while others want to figure out the new environment being in high school provides.

“I would love to see every kid I coached (at Huachuca City) play their freshman year,” Galvez said. “I think working together and communication (with the coaches at Tombstone) will make a difference ... but it will take time.”

Rhoades and Thursby also mentioned incorporating the junior high players into the high school games, whether that’s as ball boys or in the halftime talks, so they can feel included. Galvez said the high school has also offered to help them with equipment this year so they can expand their drills this upcoming season.

“If we want to have a top-notch program, then we need top-notch support and equipment,” Rhoades told the board.

While the coaches and administrators spoke to the need for collaboration, Gustavo Morales and some of the board members had a different take. Morales said as a school, the attitudes of the students needs to change, as it doesn’t make for an inviting atmosphere. Morales, who is a three-sport athlete, added that this is not just a football issue, but is across all the other sports, saying he sees it in basketball too.

Board members Rick Shelley and Mike Hayhurst alluded to those conclusions as well. Shelley, who wasn’t at the session, left comments with Devere for him to share on Shelley’s behalf. One of he comments Shelley had was that to keep kids involved in the sport, the have to feel “safe within the program.”

Hayhurst, who commended Rhoades for how he was able to keep his team together despite the low numbers in the final for games of the season, agreed there was more than camps and the junior high to be discussed.

“I think the issues are deeper than clinics ...,” he said. “We forget what sports are about. ... Sports are supposed to be fun. ... Unless we make the sport fun then those second stringers are going to leave.”