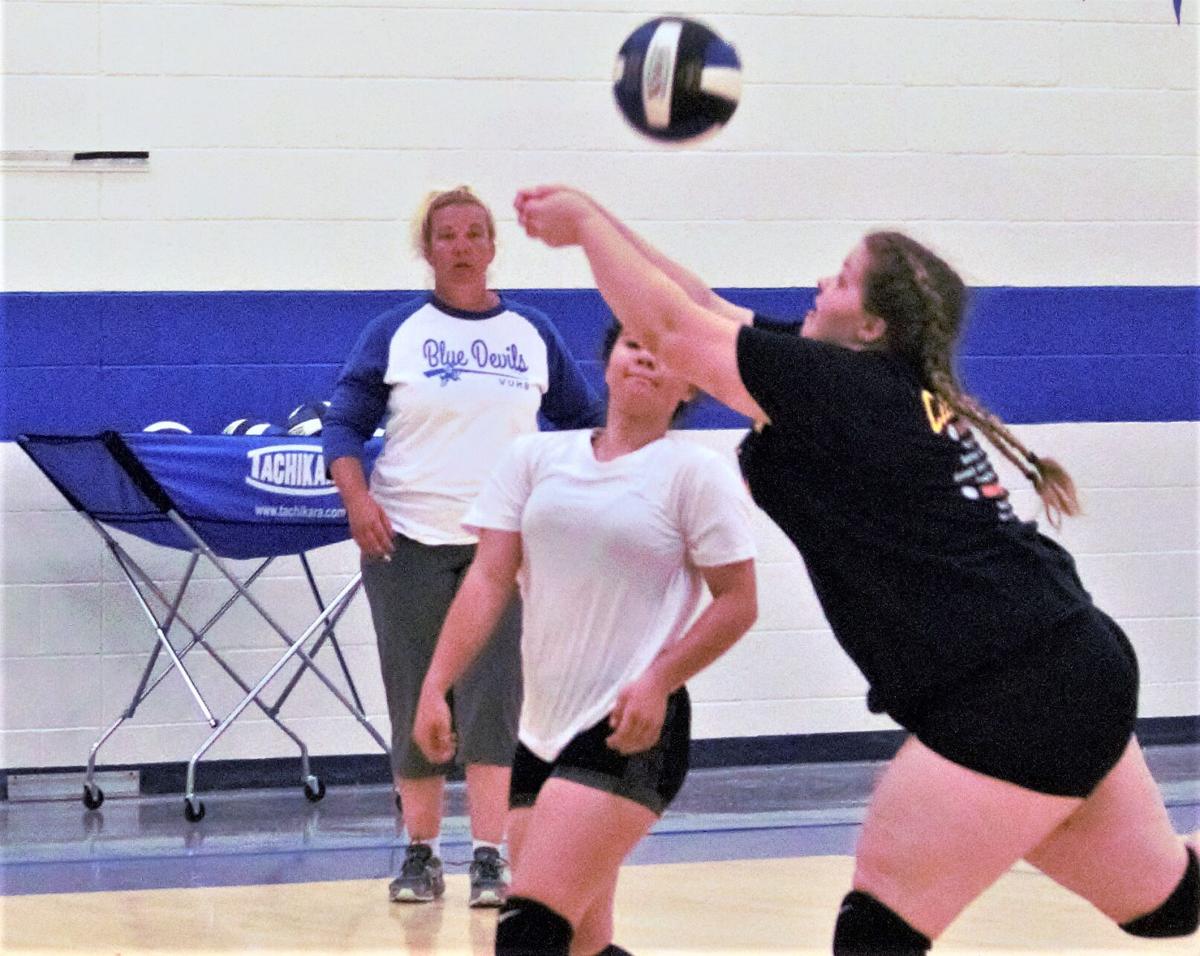 While coach Jenn Casady observes, Valerie De La Cruz and Baleigh Casady go after the volleyball in a recent practice. 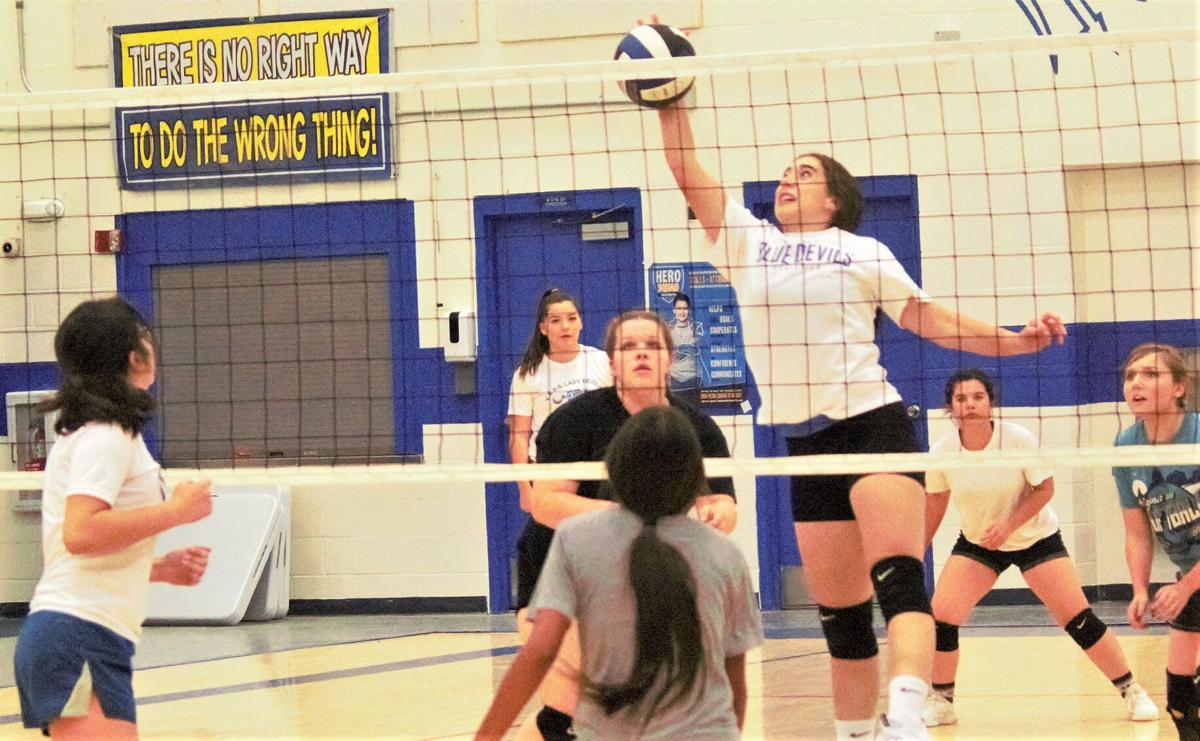 Breanna Enriquez goes up for the kill in a recent practice at Valley Union. 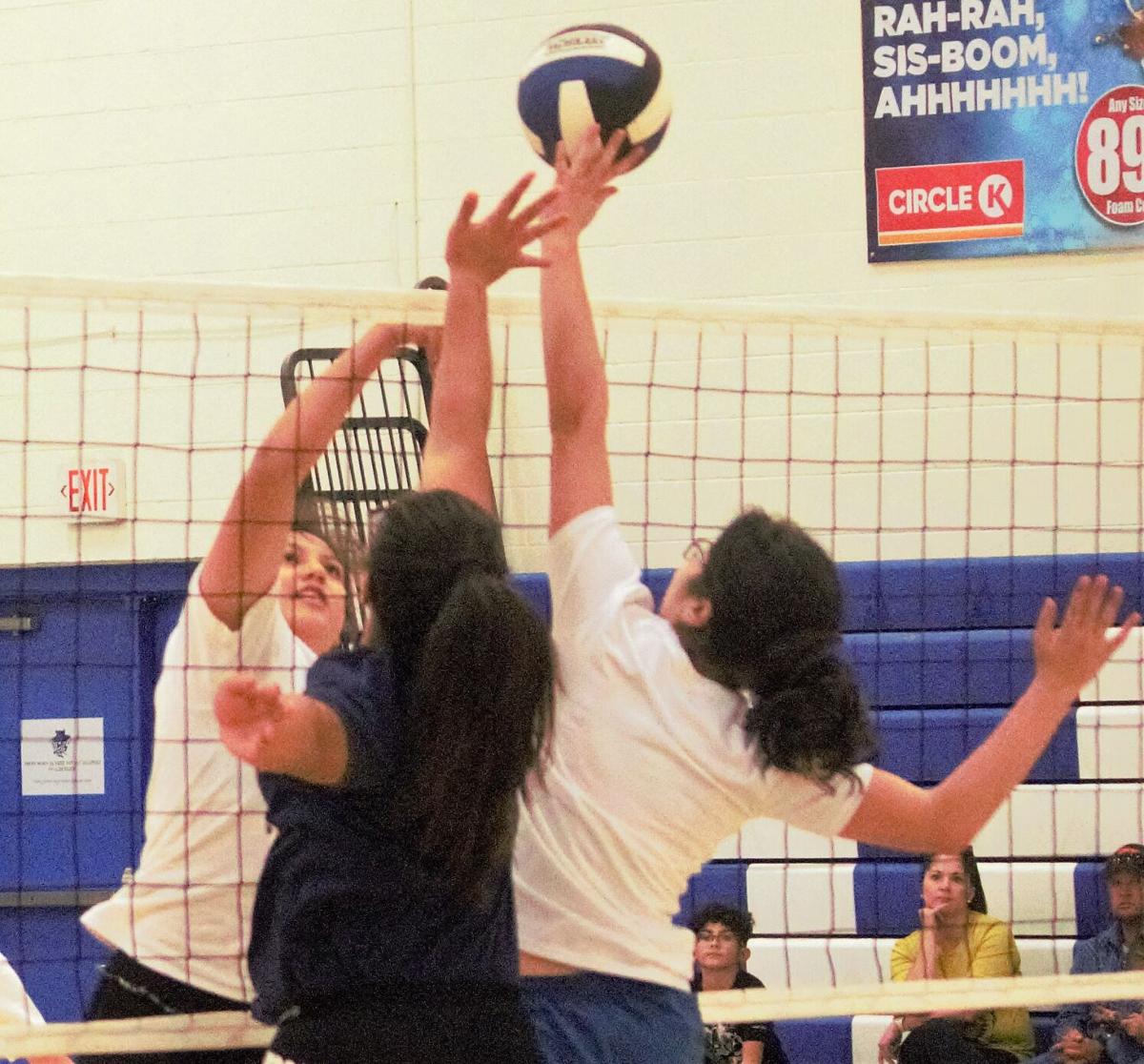 Valley Union senior Camely Esquer tries to get one of her kills past blockers Ariana Bernal and Miya Durazo during a recent practice.

While coach Jenn Casady observes, Valerie De La Cruz and Baleigh Casady go after the volleyball in a recent practice.

Breanna Enriquez goes up for the kill in a recent practice at Valley Union.

Valley Union senior Camely Esquer tries to get one of her kills past blockers Ariana Bernal and Miya Durazo during a recent practice.

ELFRIDA — A sense of excitement in the air as the Valley Union Lady Devils anxiously await the start of the upcoming volleyball season.

Head coach Jenn Casady along with her two assistants, Tori Meyer and Katy West, return for a second year. The trio are looking to build on last year’s success that put them into the state playoffs for the first time in five years.

Casady is confident in her team’s returning talent and believes the potential for her team to challenge for the 1A South championship is there, but to do that means getting past St. David, last year’s defending state and region champion.

The Lady Devils, who have not won a state championship in volleyball since 1985, were 7-11 two years ago and finished fourth in the region the year before Casady took over as coach.

Last year, under Casady, they improved to 10-8 overall and finished second in the 1A South with a 7-2 record; both losses coming to St. David. Valley Union qualified for the state playoffs only to receive the 15 seed where they faced second seeded St. David in the first round and were swept 3-0.

“Our region has changed somewhat this year,” Casady said.

The 1A South has been reduced from the 11 teams down to eight. New to the region this year are Desert Christian, Duncan and Fort Thomas in addition to the returning teams Immaculate Heart, Patagonia, San Simon, St. David and Valley Union.

“They are all formable opponents but definitely beatable with this group of girls that I have,” the coach said.

When asked how she feels they will match up with St. David, Casady replied her team will “give them a run for their money.”

After several months of having nothing but open gym several days a week, Valley Union just recently started practice officially as a team.

The Lady Devils will play 14 matches this season with no tournaments other than state. Their season begins Sept. 22 with a road match at Willcox which is followed by another road match two nights later at Tombstone.

The much anticipated match with St. David will take place Oct. 8 in Elfrida and then again Nov. 3 in St. David.

“We’ve all been chomping at the bit,” Casady replied when asked how good it feels to finally be able to officially practice as a team. “The talent on this team is extraordinary. It’s a good feeling to know that we are going to be able to showcase that and show people what all that we’ve done over the summer. These girls have put in so much hard work and effort. They deserve to have a season.”

The coach admits it’s been nerve racking dealing with all the off the court distractions but it seems they have been able to persevere.

“All we can do is move forward,” Casady said. “We need to focus on the season that’s ahead of us.”

According to the coach, players to watch this year are senior Camley Esquer who plays middle hitter and blocker, junior Breanna Enriquez who is one of three team captains along with senior Lizet Sonke and junior Valerie De La Cruz. Junior Brooke White who will be the team’s libero is another player expected to have a good season.

“These girls have blossomed over the past year,” Casady said. “They have been playing together since they were young but in softball. In volleyball they have played together but it really hasn’t been ‘their’ sport.

“For them it’s pretty neat to have a bunch of softball players get together to play volleyball.”

Casady’s daughter Baleigh, a sophomore, is also on the team who knows the game well, understands her mom’s expectations and is expected to make some considerable contributions throughout the season.

“It’s been a struggle for her having mom as the head coach,” Jenn Casady said. “We’ve had to work at it. I’m the only coach she’s ever had. I’m blessed she doesn’t know any different. By the end of the season she’s ready for basketball and I am too. When we leave the gym what we do here stays in the gym. I believe that is why it has worked.”

Both Sonke and De La Cruz say it feels good to finally be able to start practicing knowing matches are just days away.

“We weren’t sure if we were going to have a season or not,” De La Cruz said. “We’re all pretty anxious to start playing.”

Both players say they feel safe going to practice and feel the district has taken the steps needed in order to protect them against the coronavirus.

The two captains refer to the team as their extended family.

“We all get along pretty good and have a good connection and talk real well on the court,” De La Cruz said.

“Coach has done a great job in helping us improve,” Sonke said. “We’re all pretty anxious to get on the court and show everyone how much we’ve improved.”