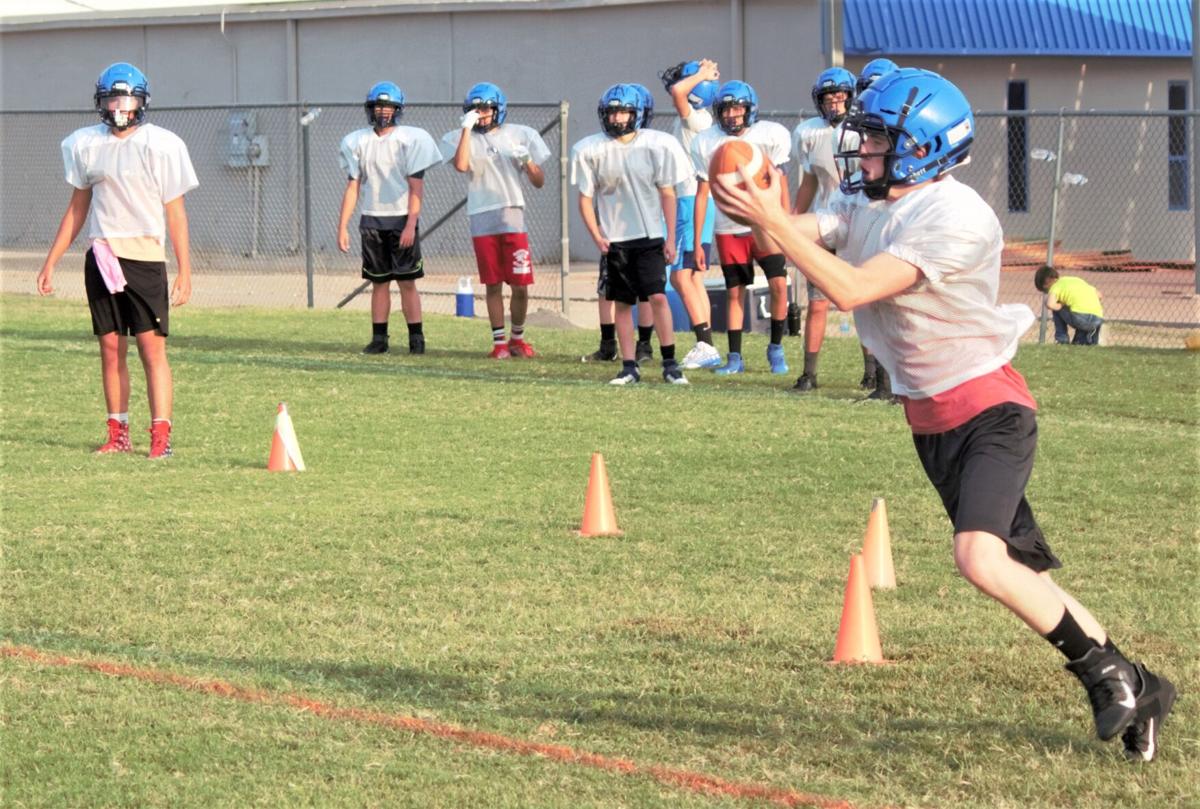 Boyd Tolly hauls in a pass from Valley Union quarterback J.J. Valenzuela during a recent practice. 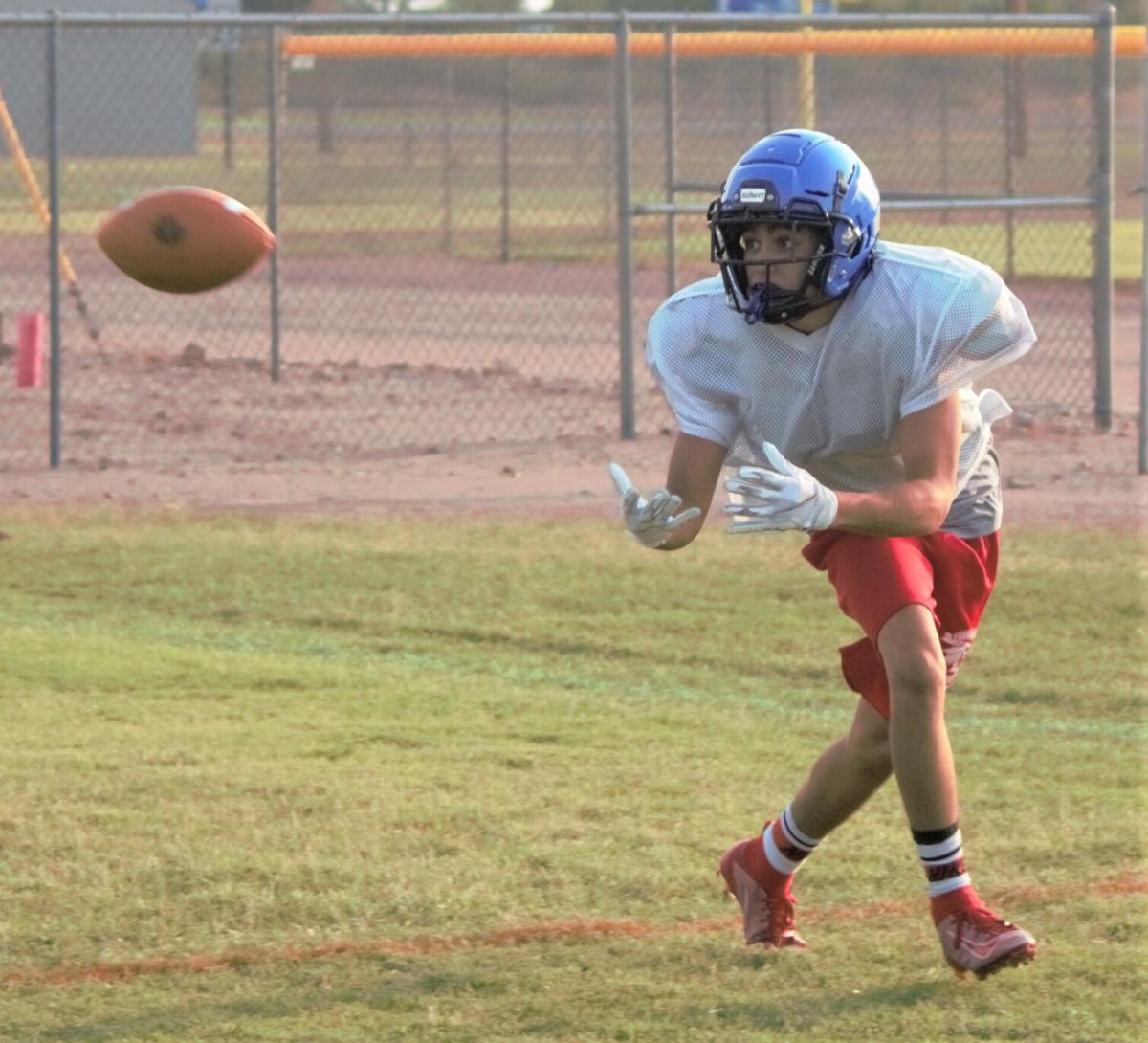 Leo Parra hauls in a pass from VU quarterback J.J. Valenzuela at a recent practice.

Boyd Tolly hauls in a pass from Valley Union quarterback J.J. Valenzuela during a recent practice.

Leo Parra hauls in a pass from VU quarterback J.J. Valenzuela at a recent practice.

ELFRIDA — The Valley Union Blue Devils are out to restore some of that Blue Devil pride and respect they used to get from other schools when they stepped on the field this season.

In 2015-2016 the Blue Devils were 7-1 and lost to Pima in the 1A state finals. Shortly after their season was over their coach of 10 years, Tony Luzania, stepped down. Replacing him was then assistant coach John Estelle who took the team to the state playoffs his first two years where the Blue Devils were eliminated in the first round. The last two years Valley Union went 2-7 and finished 1-8 last year winning the first game before dropping the next eight. Estelle announced at the end of last season he would not be returning this year.

During the off season seven faces familiar to the Valley Union football program agreed to step up and attempt to lead the Blue Devils back to the state playoffs.

“The biggest thing we’re trying to do this year is feed off of what coach Estelle started in trying to change the culture a little bit and get the mindset and attitudes right,” said Brandon Gilbreth, an assistant coach for Estelle last season and one of the new coaches leading the team this year. “If we can do that I feel it will help everything progress in the right direction.”

The other coaches volunteering their time this year along with Gilbreth are: Dusty Vasquez, Cody Essary, Matt Riesgo, Brandon Evans, and Ramon and Milo Martinez.

Throughout the summer Valley Union has been having conditioning waiting for word whether or not there would be a season. An average of 20 players were showing up on a regular basis. Now that practice has begun Gilbreth states those numbers have remained the same. The coach said having the summer conditioning program has helped in that now that practice has begun officially they don’t have to go through all the preconditioning other schools may experience if they did not have an open field.

“We were pretty confident there would be some kind of a season we just we’re sure how many games we would play,” Gilbreth said.

The coach states he is looking for big things this year from running backs Jacob Sonke and Leo Parra as well as junior quarterback J.J. Valenzuela

Senior Levi Lawson who, according to Gilbreth, had a game last year where he had over 200 yards in receptions, is also expected to be a key contributor to the offense this season.

“We’ve also got some sophomores I’m expecting to contribute this season,” the coach said.

Luke Essary and Will Smith are two of those sophomores. Another is Brandon’s son Kolby who saw action at quarterback, tailback and safety last year as a freshman.

Anchoring the front line this year will be junior center Wyatt Casady. Alongside him will be Essary and Smith.

Other sophomores who may see some playing time this year are Isaiah Valdez, Kohan Evans and Elijah Riesgo, who along with Kolby played for the Douglas Chargers youth football team and have a pretty good understanding of the game.

“We’ve got some talented running backs,” Gilbreth said. “I’ve also got some good receivers and a quarterback who has a decent arm. What we will do on offense will depend on what’s happening on the field.”

The revised football schedule was recently released and Valley Union learned it will play six games instead of the nine games beginning Oct. 2 when Valley Union hosts Superior. The next week, Oct. 9 will be homecoming for the Devils who will face St. David, their 1A South rivals who thumped them twice last year.

Teams in the 1A South this year are Duncan, Fort Thomas, St. David and Valley Union. San Manuel, who was in the 2A last year and played 11-man, rounds out the conference.

“I think our conference is decent top to bottom, I just hope we can fit in it and compete a little better thwwan we did last year,” Gilbreth said. “I expect St. David to be good. They’re bringing back a pretty good team from last year. As long as we execute and do what we’re supposed to do, I feel we can compete with anyone. We’re all pretty anxious to start playing some games.”

The Arizona Interscholastic Association is leaving the decision about having fans in the stands this fall up to the individual districts.

Valley Union Athletic Director Jeff Baker said, "Until further notice we will continue with 2 home fans per volleyball player and 1 away fan per player.

And for football  4 fans per home player and 2 per visitor.  Masks will be required and we will encourage  all to social distance and spread out."