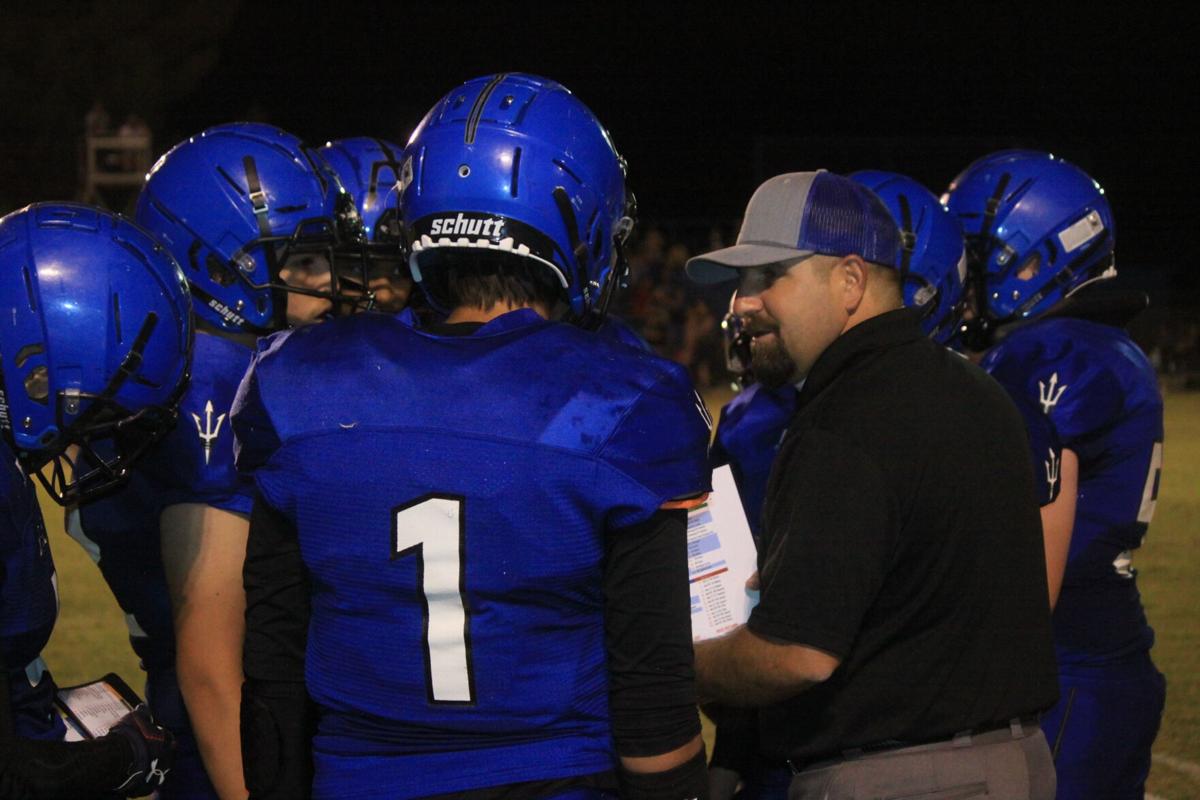 Valley Union football coach Brandon Gilbreth talks to his players during a game earlier this year. Gilbreth was recently selected the 1A South Region Coach of the Year. 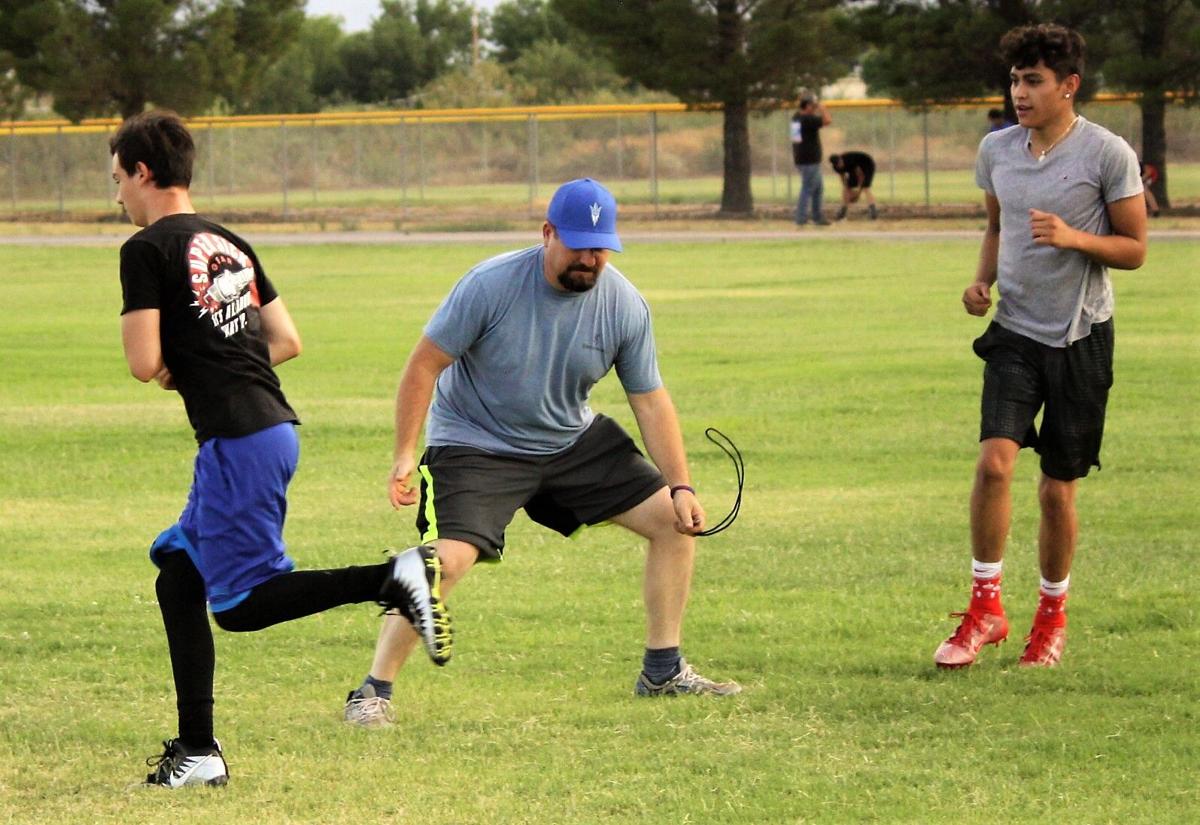 Valley Union football coach Brandon Gilbreth works with his players during a practice this past season.

Valley Union football coach Brandon Gilbreth talks to his players during a game earlier this year. Gilbreth was recently selected the 1A South Region Coach of the Year.

Valley Union football coach Brandon Gilbreth works with his players during a practice this past season.

ELFRIDA — It’s often been said there is more to coaching than wins and losses. Valley Union first-year head coach Brandon Gilbreth is a classic example of that.

Despite having won just one game in his first year as head coach of the Blue Devils, Gilbreth has been honored as the 1A South Coach of the Year.

When learning his opposing coaches had honored him with coach of the year honors Gilbreth stated he was surprised and very grateful.

“It’s always nice when hard work is noticed,” he said. “I know it’s cliche, but this really was a team effort. This coaching staff worked hard, and we all worked really well together. Our No. 1 goal was to improve in the classroom, and I believe that was our best accomplishment. We had 100% eligibility for our last game.”

Jeffrey Baker, Valley Union athletic director, said this award should feel extra special to Gilbreth, because more than 90 percent of the time the coach of the year award goes to the section championship coach. Valley Union was not in the running for the sectional title this year.

“A couple of things come to mind with coach Gilbreth,” Baker said. “Though the team only won one game this year, the improvement in esprit de corps, morale and discipline were readily apparent throughout the season. Coach Gilbreth and staff put a huge amount of time into game preparation and film study, so the young players learned a tremendous amount that will help them in future years. They did not go into any game unprepared based on the young talent available to the coaching staff. He and his staff spend so much time with the player’s teachers trying to ensure that all players did their work. The result was that the entire team was eligible to play the last couple of games. That is the first time in a while that that has happened here at Valley Union during football season, and his contributions to helping these boys grow into young men cannot be overlooked from this perspective.”

Braden Davis, head coach at St. David, Valley Union’s rival, saw that as well and nominated Gilbreath for the honor.

“I thought he did an excellent job with the players he had,” Davis said. “We felt that they improved a ton (especially in areas of physicality, fundamentals and execution) from when we played them the second game of the year to when our JV’s met about a month later. I know he worked his tail off helping those kids get and stay eligible, regain a sense of brotherhood, and play with a high level of sportsmanship and character. I think he’s doing things the right way. I’ve had more than one of our fans comment to me about the sportsmanship and character of his players, and let me tell you, that’s quite an accolade for a Devil coming from a Tiger fan! As you know, our rivalry runs long and deep.”

Valley Union captain Jacob Sonke, who had a state record performance against Mohave Accelerated this season, said he feels his coach is very deserving of this award and is happy others felt the same way.

“He made my last year very enjoyable,” Sonke said. “This started during the summer when many of us were wanting to go to practice Monday through Thursday. He would always be there. It was obvious from the start all the coaches were there for us, wanting to help us get better. All the coaches this year made the season fun. I am so thankful to them for that.”

Gilbreth is Sonke’s third head coach in four years at Valley Union. He added the readjustment to each new coach with new plays was kind of hard but it was clear from the start Gilbreth was different. He wishes he had one more year to play for him.

“What impressed me the most about the coach was how hard he worked to make sure we were doing well in the classroom,” Sonke said. “Whenever we had kids that were failing, coach would cancel practice and have us study. He’d even have other students who were passing help those who weren’t.”

Gilbreth said in looking back on the season there were many highlights that are fond memories.

“First was being able to watch Jacob do what he was able to do,” the coach said. “Second was the growth of all the first-year kids that had to step up and play huge minutes all season long. The most exciting has to be listening to the boys wanting to get back in the weight room and playing more football.”

Looking ahead, Gilbreth said it’s tough to plan with the way things are going.

“I would love to keep pushing the guys in the classroom,” he said. “We also need to get stronger, faster and keep learning the game (and) work hard.”