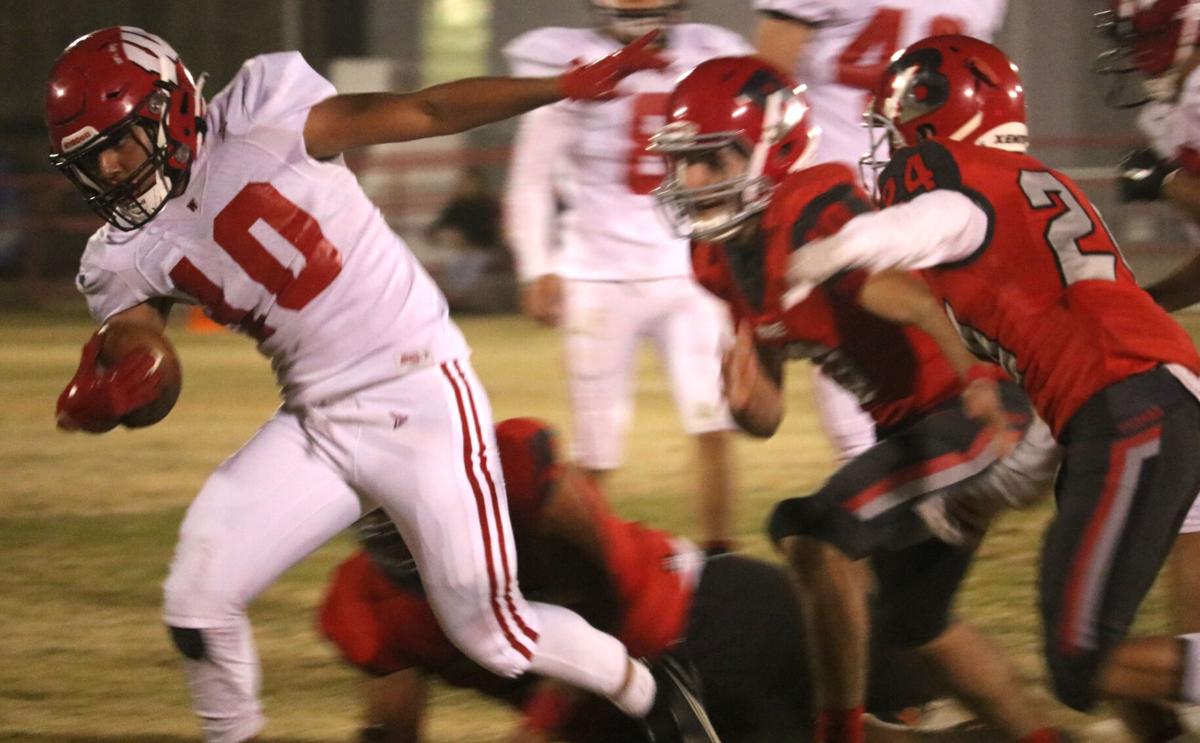 Christian Pando pushes past two Bisbee defenders on his way up field Friday night in Bisbee. 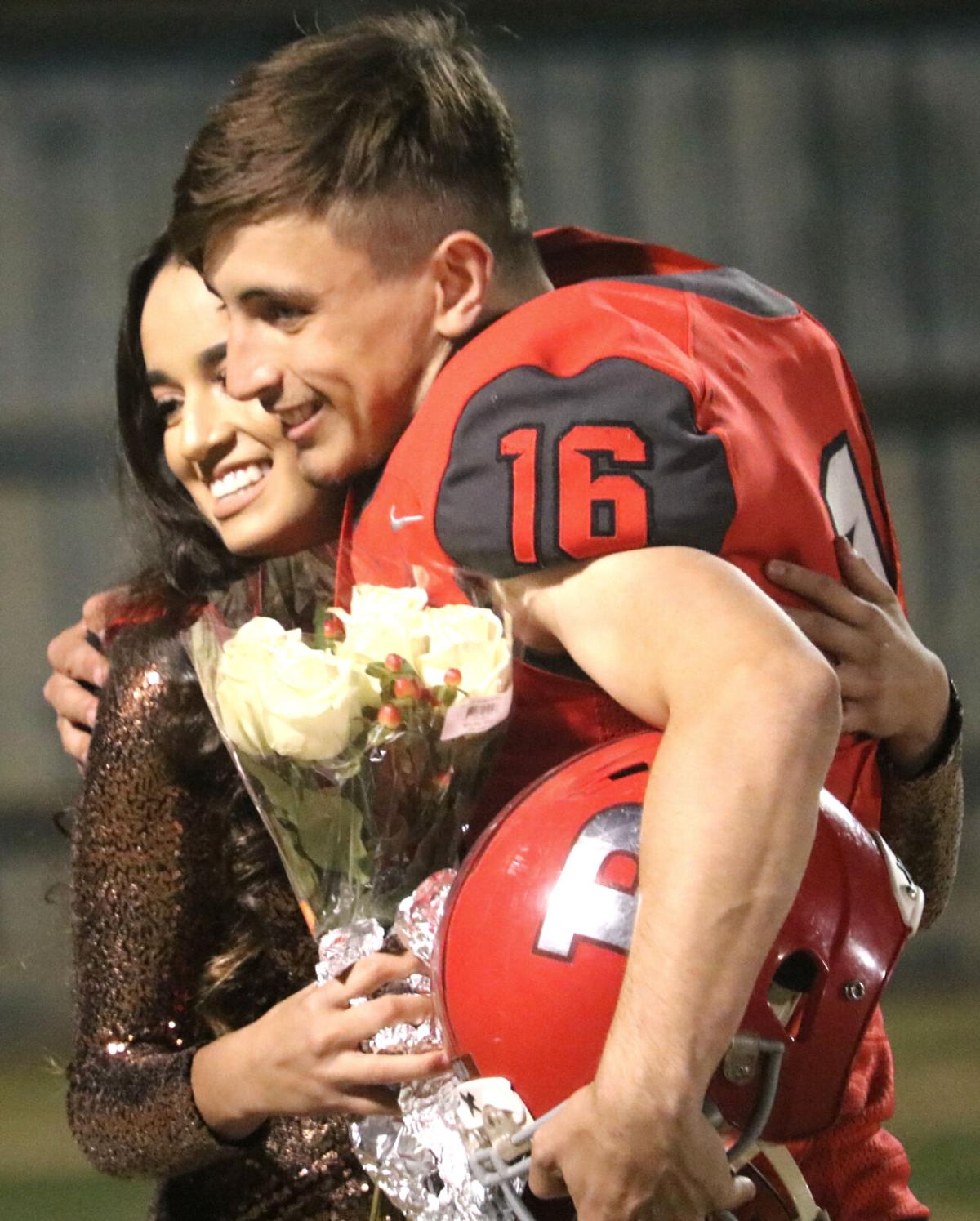 Tyler Schasteen and Jenitzia Valenzuela were crowned this year’s homecoming king and queen. 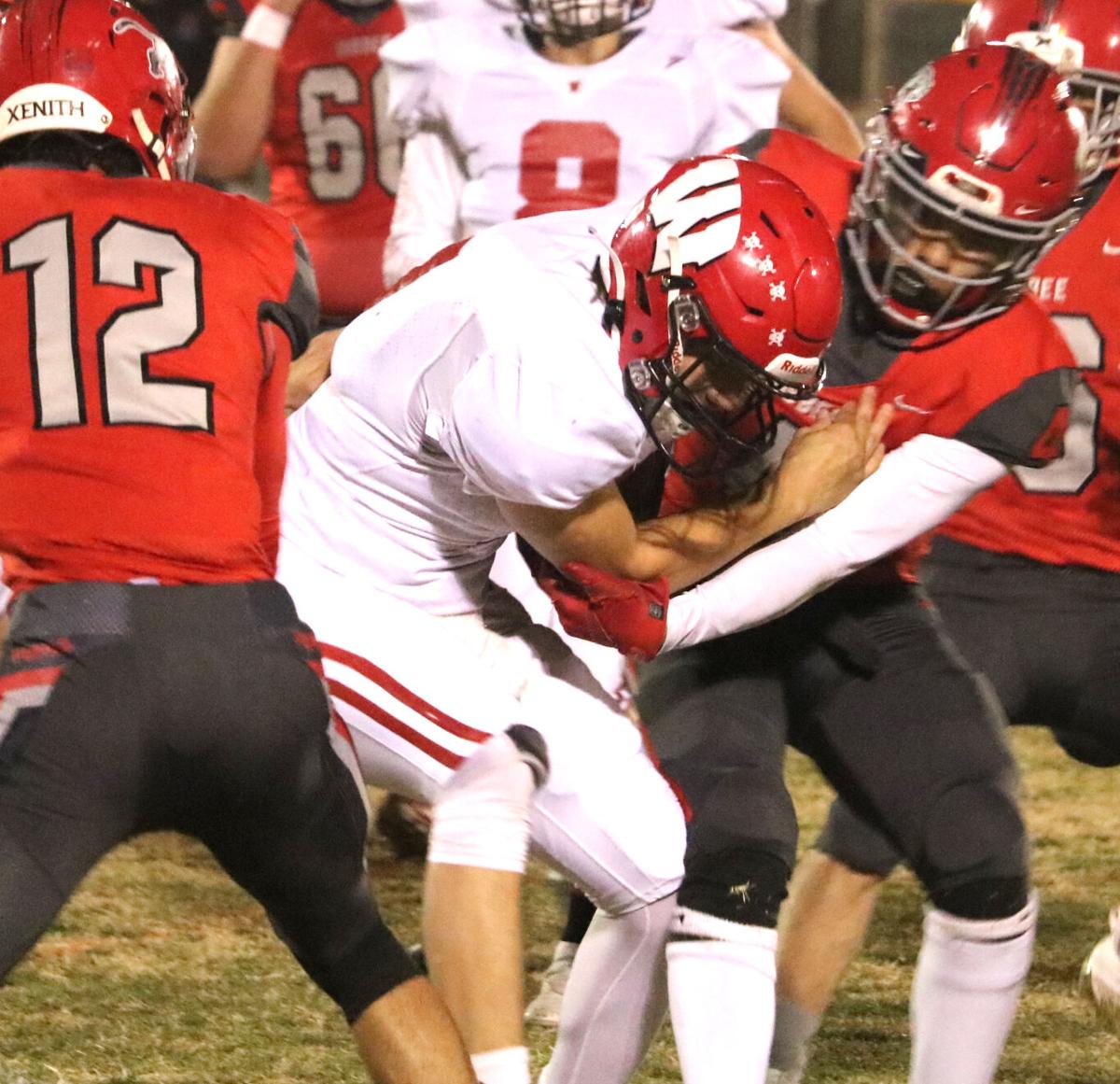 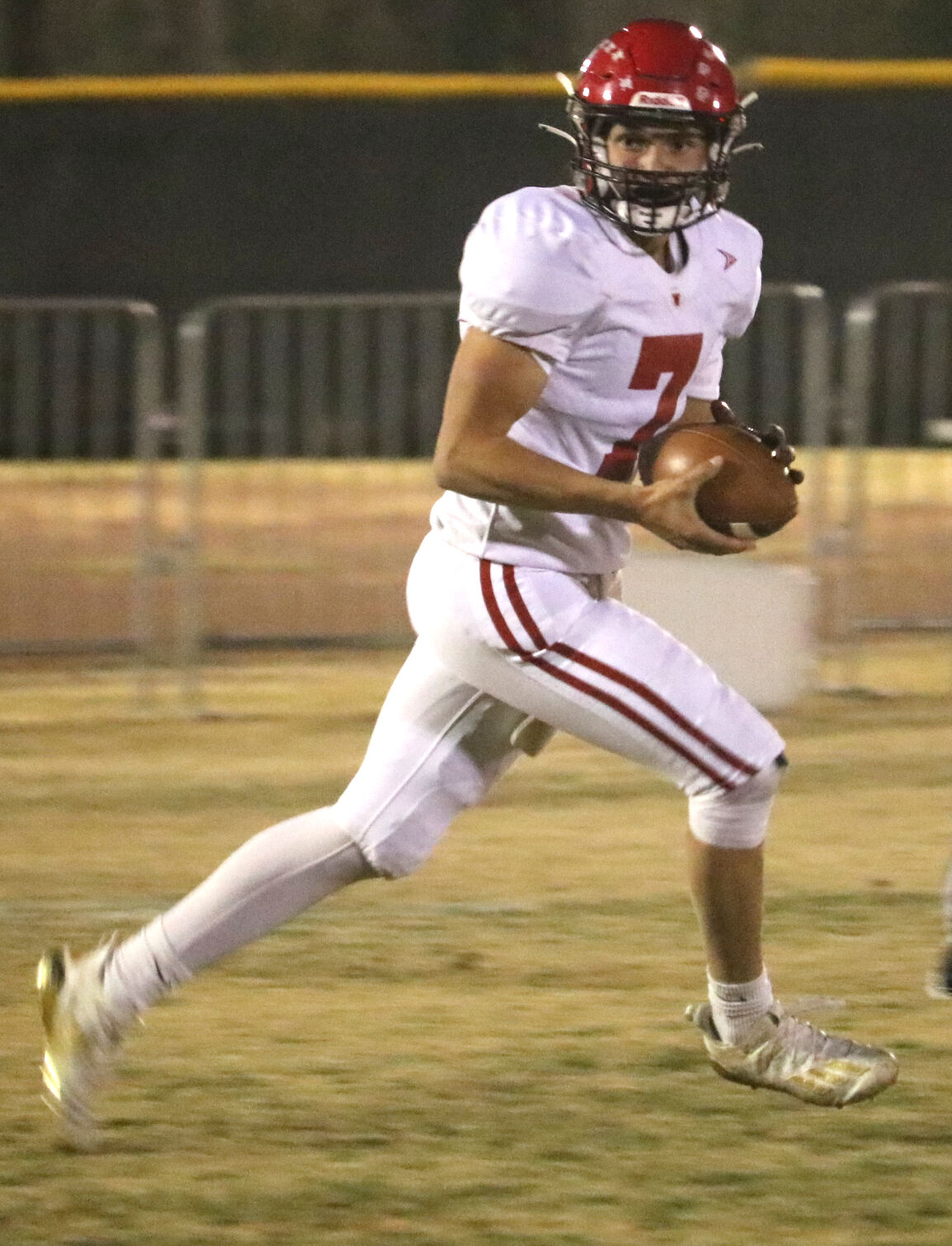 The Pumas' Ayden Fuentes looks downfield to make a pass. 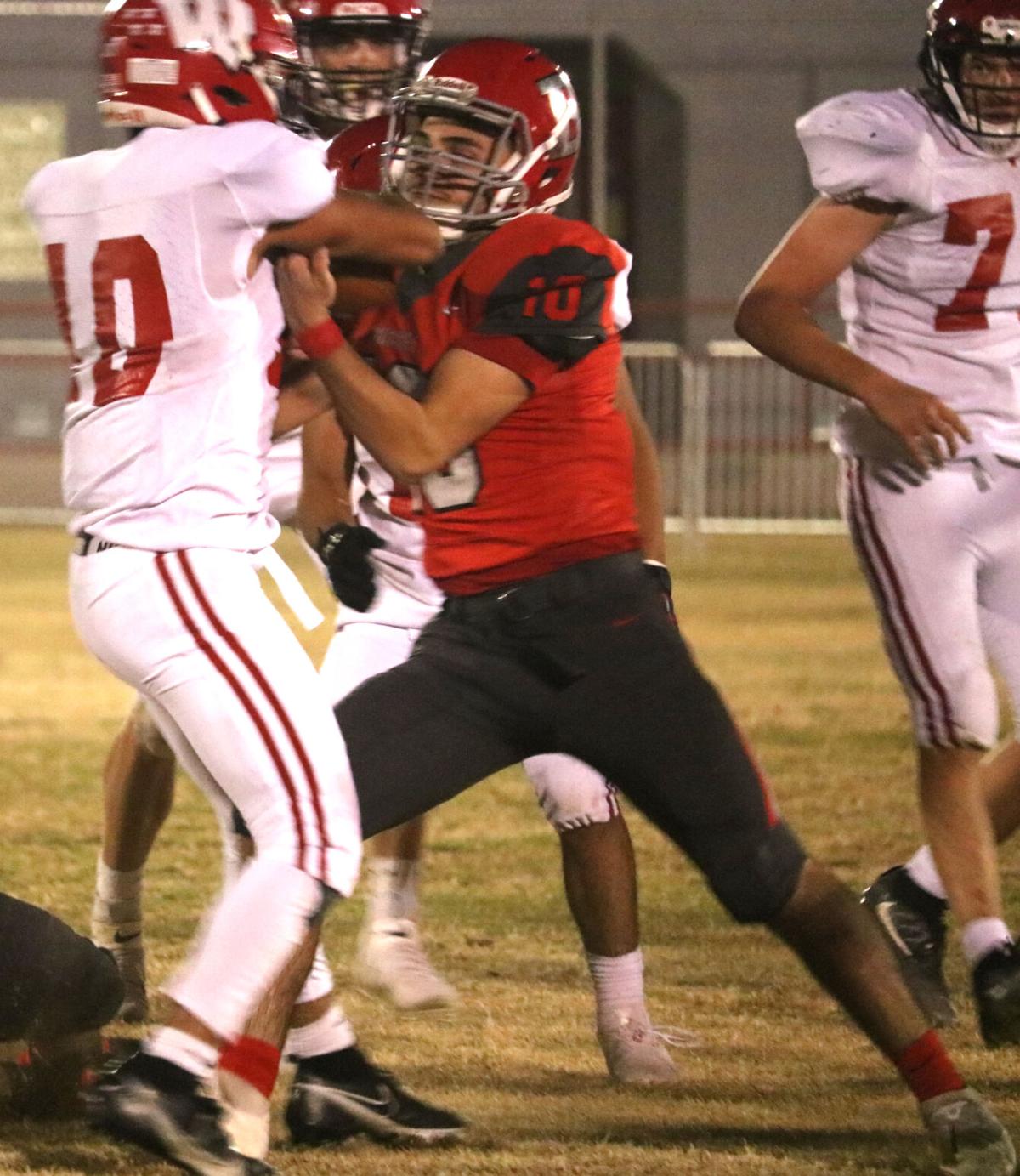 Bisbee's Zergyon Adame makes a block on Christian Pando in the first half of Friday's game.

Christian Pando pushes past two Bisbee defenders on his way up field Friday night in Bisbee.

Tyler Schasteen and Jenitzia Valenzuela were crowned this year’s homecoming king and queen.

The Pumas' Ayden Fuentes looks downfield to make a pass.

Bisbee's Zergyon Adame makes a block on Christian Pando in the first half of Friday's game.

BISBEE — Willcox moved to 2-0 on the season Friday after defeating Bisbee 48-16 on the Pumas’ Homecoming.

Turnovers and poor tackling by Bisbee allowed Willcox to dominate possession and the scoreboard. Bisbee won the opening coin toss and elected to receive the ball. Less than 20 seconds into the game Bisbee fumbled the ball and Willcox recovered. Two minutes later Christian Pando rushed into the end zone for the first score of the game. The point after attempt was missed, but the Cowboys led 6-0 with 9:37 to play in the first quarter.

Bisbee fumbled the football once again on its next drive. This time Willcox recovered at the Bisbee 48-yard line. The Cowboys cashed in on the turnover with a 7-yard rushing touchdown by senior quarterback Ayden Fuentes. The Pumas stopped the two-point conversion attempt but trailed 12-0 with 3:15 on the clock. Willcox carried the 12-point lead into the second quarter. Despite missing the extra points the scoreboard in the stadium posted the Cowboys scoring 14 points, which is why the score posted online shows Willcox with 50 points.

Two minutes into the second quarter, Fuentes crossed the goal line for the second time om a 9-yard run. He rushed for the 2-point attempt to make the score 20-0.

The Pumas fumbled on their first drive of the second quarter, giving the ball back to the Cowboys. Jaxson Macumber made Bisbee pay for the mistake as he rushed into the end zone on the ensuing dive. He also added the extra two points for Willcox, which increased its lead to 28-0 with 3:46 to play in the half.

Bisbee broke its scoreless drought on the next drive when Geoffrey Gribble ran 33 yards for the touchdown. Diego Chavez added two points on a quarterback keeper to make the score 28-8 with just less than two minutes to play in the second quarter.

Momentum seemed to shift in Bisbee’s favor. Manuel Jimenez picked off Fuentes’ pass 30 seconds after the Pumas touchdown to give the home team the ball. The drive was shortlived, however, as Bisbee fumbled and Isaac Felix returned it for a Willcox touchdown.

The Puma defense once again stopped the two-point attempt but trailed 34-8. Bisbee fumbled for the fifth of the half with 13 seconds left before the intermission. Willcox led 36-8 advantage at halftime.

“We can’t turn the ball over six times and expect to win games,” Bisbee head coach Brian Vertrees said after the game. “We have to do the little things well if we are going to get into the win column. We have a good group of guys and I’m sure they are going to come ready to work and we will continue to try to iron out some of these issues.”

During the break the Bisbee Homecoming royalty was recognized. Bisbee football player Tyler Schasteen and Jenitzia Valenzuela were crowned this year’s homecoming king and queen.

In the third quarter, Ote Allsup scored two touchdowns, one covering of 33 yards, to increase the Cowboys’ lead to 48-8. Gribble scored his second touchdown of the game on a 37-yard run and once again Chavez completed the two-point conversion.

The 0-5 Pumas travel to Pima on Friday while Willcox hopes to continue its winning ways at home against Morenci.