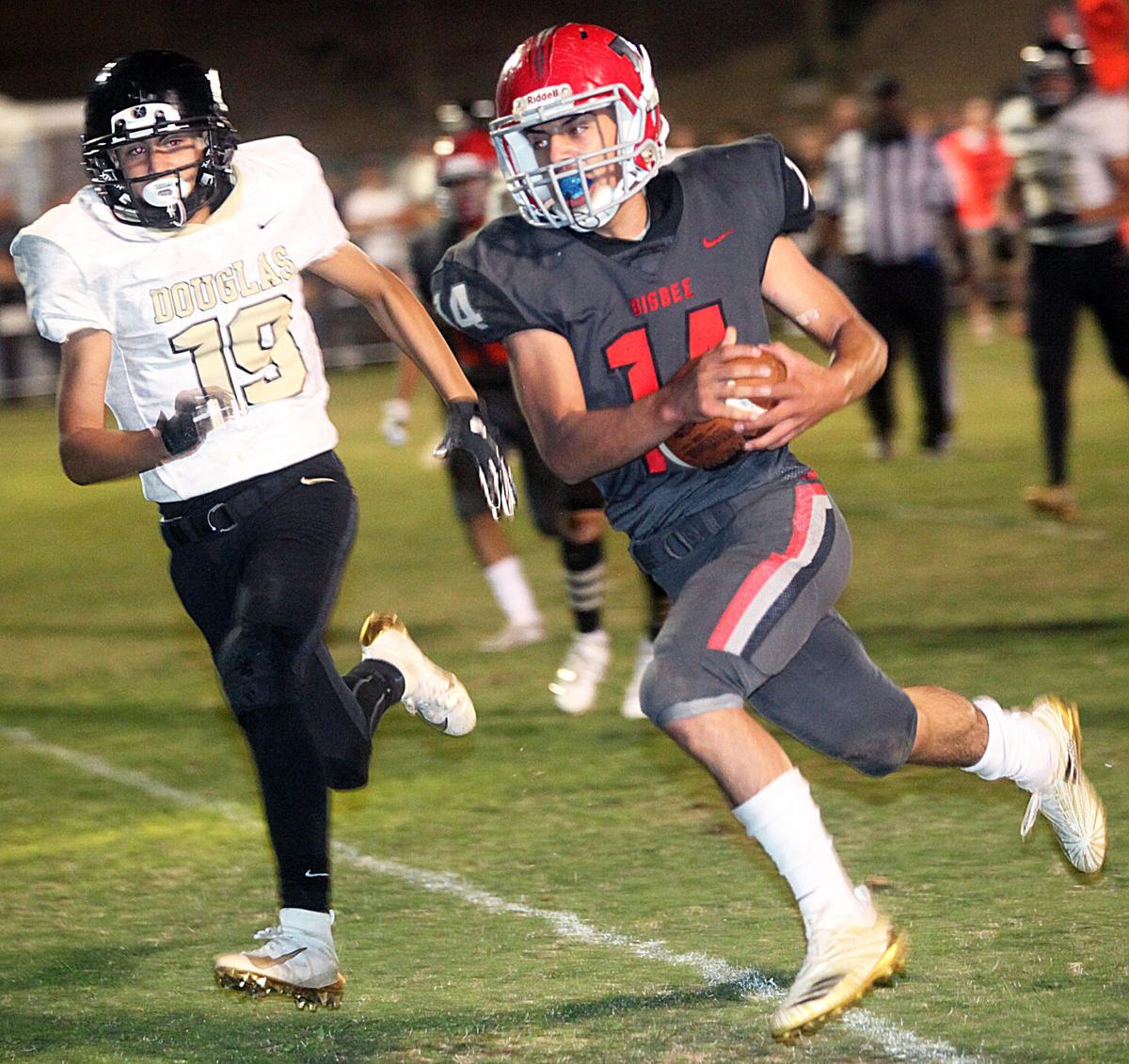 The date for Week 1 is uncertain but no matter when it is Douglas and Bisbee will faceoff for The Pick. 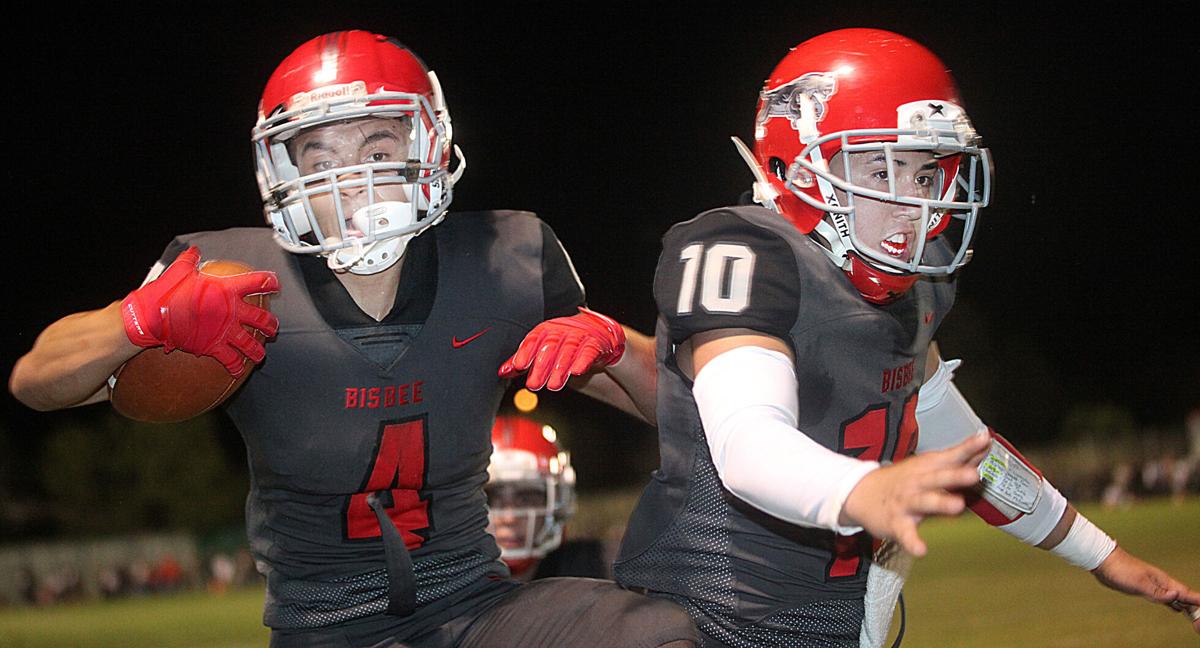 The date for Week 1 is uncertain but no matter when it is Douglas and Bisbee will faceoff for The Pick.

COUNTY — The only game high school coaches and student-athletes are participating in right now is the waiting game. Athletic programs are waiting for the green light from district administrators to begin voluntary workouts before the Arizona Interscholastic Association mandates begin on Aug. 17.

AIA Executive Director David Hines reconfirmed earlier this week the fall season will begin in a few weeks with the first football games of the season to be played on Sept. 11. This will allow teams to have the mandatory three to four weeks of practice before the first game.

With local district administrators weighing their options to play, not to play or delay even further, high school football coaches from across the state are asking for the football season to be played in the spring rather than in six weeks.

“I’m curious as to which schools are going to start practice on the 17th and which ones aren’t,” said Douglas High School Football coach Hunter Long. “I think we’re all wondering what the guidelines are going to be.”

The letter, which is dated July 16, was sent to superintendents and the AIA. Long is the only football coach from Cochise County to sign the letter.

“My thing was I thought pushing the football season back to the spring would give us a little more time and not be so rushed,” he said. “We’re all waiting to see if this virus will calm itself down and if our numbers will drop. We still don’t have any concrete answers and we figured having those few extra months to form a plan would allow us to get ahead of this.”

Three other 4A Gila Region coaches signed the letter: Palo Verde, Empire and Amphitheater. The letter states eight reasons why football season should be pushed to the fall, including that the shortened season is unfair for players.

“It has been over four months since many coaches have seen their players face to face,” the letter reads. “Friday night games are great but they are not everything to the experience. These

students have already lost four months, soon to be five, and giving them a few games is simply not enough.”

With the help of the letter, Long was hoping to see a switch in seasons where baseball would be played in the fall and football in the spring. The letter addressed the issue of multi-sport athletes by stating, “We recognize that many schools have multi-sport athletes that are essential to their

programs and this will put a strain on them. This we cannot deny but would argue that it is better to give students a choice versus making the decision for them by cancelling games or possibly a season.”

Bisbee football coach Brian Vertrees said making a player choose, especially seniors is unfair, which is why he chose not to sign the letter.

“I wouldn’t feel comfortable putting seniors in the position of choosing between football and baseball, especially since they lost their season last year,” he said. “It’s not fair.”

“We’ll compete any time,” Vertrees said. “They’ll be ready no matter when Week 1 is.”

Buena football coach Joe Thomas said he received the letter but did not sign it. He said he passed it to school athletic director Greg Duce and principal Kristen Hale for their input but the letter was sent before he heard back from them about it. Buena athletics is still postponed indefinitely and students are left to work out individually.

Another concern and reason for wanting to push the season back is the hurry-up nature coaches, players and schools will be in to start the season. The Bulldog football team was decimated by injuries last year. Long, who is starting his second year as head coach of the Bulldogs, along with his staff were looking forward to having a full offseason conditioning program with his players trying to get them ready for the upcoming season.

“We were looking forward to having a full offseason program and building these guys up which we hope would lead to injury prevention,” he said. “Actually our program was doing really, really well throughout the winter and up to spring break. Once COVID hit, that set us back big time and I have not been able to work with my athletes since. Luckily, I’m still able to communicate with my players and they’re able to do workouts on their own at home. We’re also able to do some diagramming and go over our playbook throughout virtual meetings which is not the same but does allow us to get some work in.”

Schools across the state and county are in different stages of their return to athletics. Valley Union has been practicing for weeks, Tombstone started workouts in June but suspended them earlier this month and Buena and Bisbee haven’t touched foot on the field this summer. Long is aware of what the Valley Union football program is doing in regards to its offseason conditioning program, but states DUSD officials, along with Athletic Trainer Mitch Nelson and Athletic Director Angel Ortega, felt the online virtual workouts would be the safest way to go for the time being.

“Obviously every school is going to be different but we felt this was the safest way to go considering the circumstances,” the coach said. “We’re doing our best to roll with the punches and make do with what we got.”