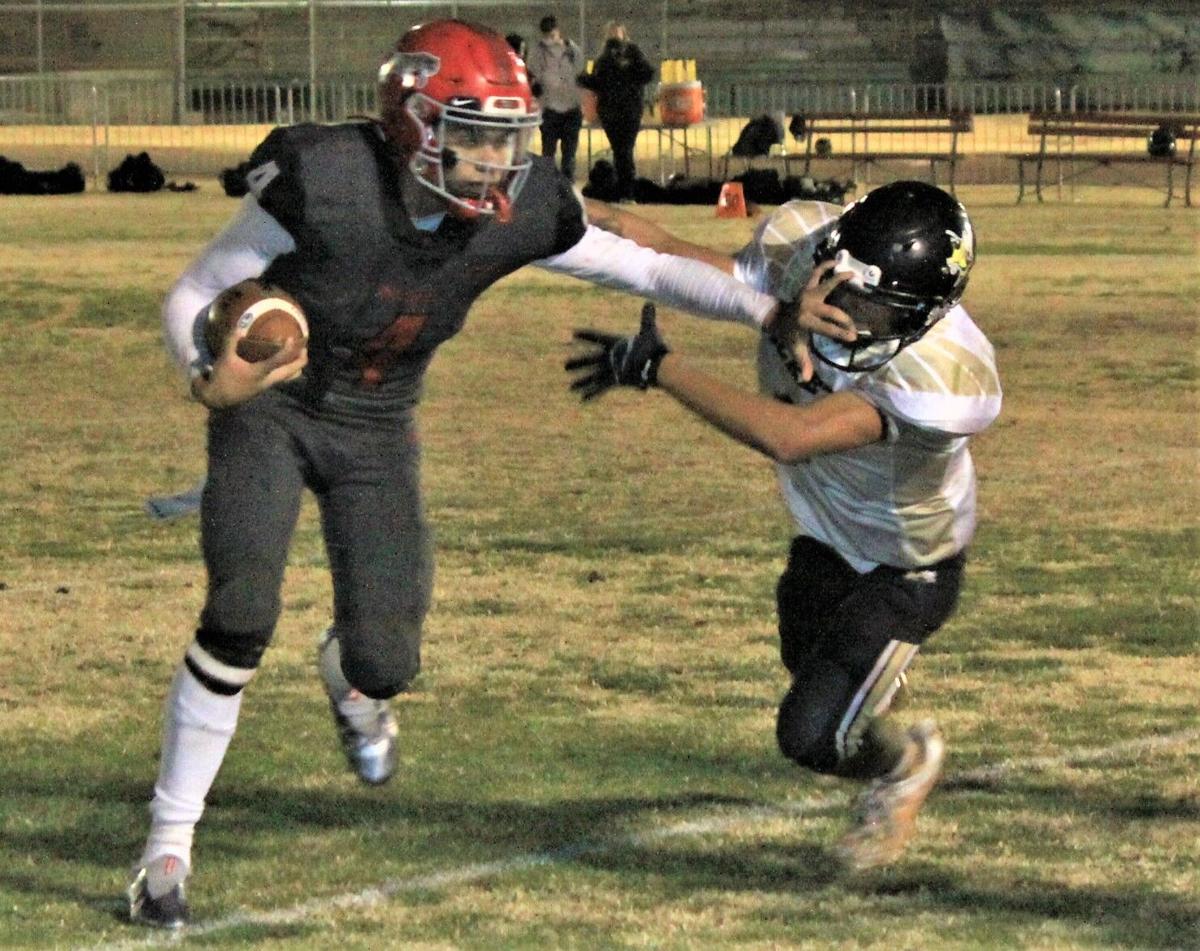 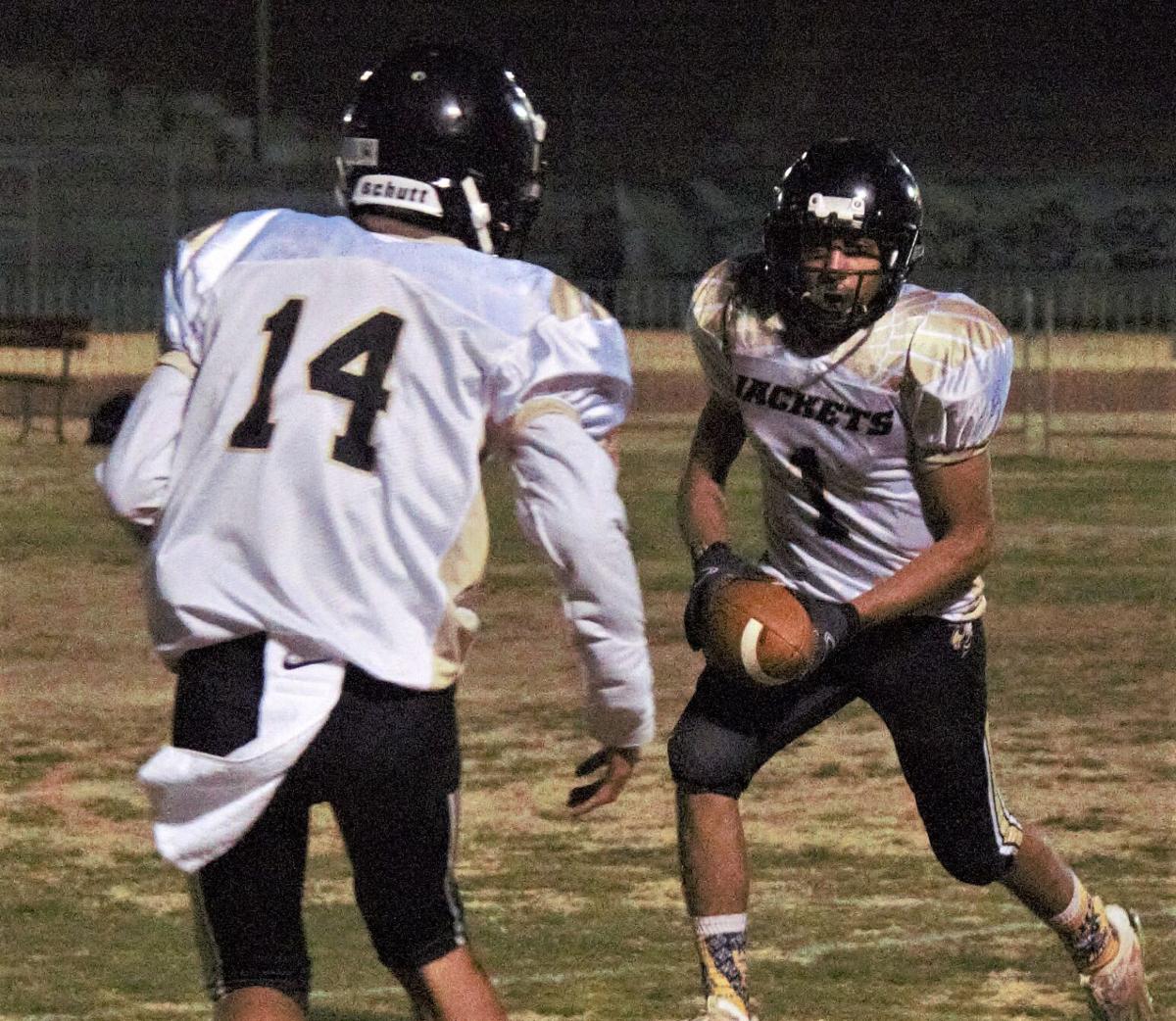 Aian Greenlee of Tombstone prepares to hand off the ball to a teammate Friday on a reverse that resulted into a Yellow Jacket fumble in the second half.

Aian Greenlee of Tombstone prepares to hand off the ball to a teammate Friday on a reverse that resulted into a Yellow Jacket fumble in the second half.

BISBEE — In what can only be described as a wild and crazy season complicated by the COVID-19 pandemic, the Bisbee Pumas found a way to honor their departing seniors on Friday by going out and thumping the Tombstone Yellow Jackets 54-9 on Senior Night at Warren Stadium.

Prior to the start of the game 12 BHS seniors from football, volleyball, cross-country, soccer and cheerleading were honored along with their parents.

The Pumas then proceeded to go out and take it to the Yellow Jackets, taking advantage of two first-quarter turnovers by Tombstone, both of which led to touchdown runs of 5 yards by sophomore Diego Chavez and 14 yards by senior Geoffrey Gribble. Chavez scored both 2-point conversion attempts, giving Bisbee a 16-0 lead 9 minutes into the game.

“I’m really happy for our seniors,” Bisbee coach Brian Vertrees said after the win, which snapped a six-game losing streak for the Pumas. “It hasn’t been an easy road for us this season. These seniors grinded it out they worked hard all year. It’s nice to send them out with a win.”

The second quarter saw Bisbee and Tombstone score a combined 33 points. Tombstone began the scoring, connecting on a 32-yard field goal from Zeke Esparza to make the score 16-3.

Bisbee came right back on the next possession and drove 61 yards in five plays, scoring on an 18-yard run by Chavez. His successful 2-point conversion padded the Pumas’ lead to 24-3.

A Tombstone turnover on the next possession was recovered by Bisbee, which needed just three plays before Gribble scored his second touchdown of the game. Chavez connected with Nito Hernandez on the conversion, giving the Pumas a 32-3 lead.

Tombstone quarterback Brandon Redendo used his size and speed to power his way into the end zone, scoring from 65-yards out on the following possession. The extra point was blocked and Bisbee maintained a comfortable 23-point lead.

With time running down in the first half, senior Tyler Schasteen made his last game at Bisbee a memorable one, scoring on a 2-yard run. Gribble’s conversion carry gave the Pumas a 40-9 lead at the half.

Senior Manny Amaya had a touchdown run in the third quarter and Chavez closed out the scoring in the fourth on a 6-yard touchdown run that was followed by a 2-point conversion, giving the Pumas a 54-9 lead and putting the game into a running clock.

Looking back on the season, Vertrees admitted it’s been a heck of a challenge coaching during the COVID-19 pandemic.

“We were doing things that we normally wouldn’t be doing as part of our regular routine,” he said. “Our fundamental work during the offseason was impacted plus the ability to get these guys ready to play Week One was a challenge. It was definitely a blur mixed in with a whole lot of challenges.”

The coach did admit that seeing what is happening with other football programs throughout the county and state, he and his players are aware how fortunate they are to have been able to have a season and play seven games.

“I’m glad we could finish it with a win,” he said.

Bisbee ends the season with a 1-6 record while Tombstone drops to 0-7.