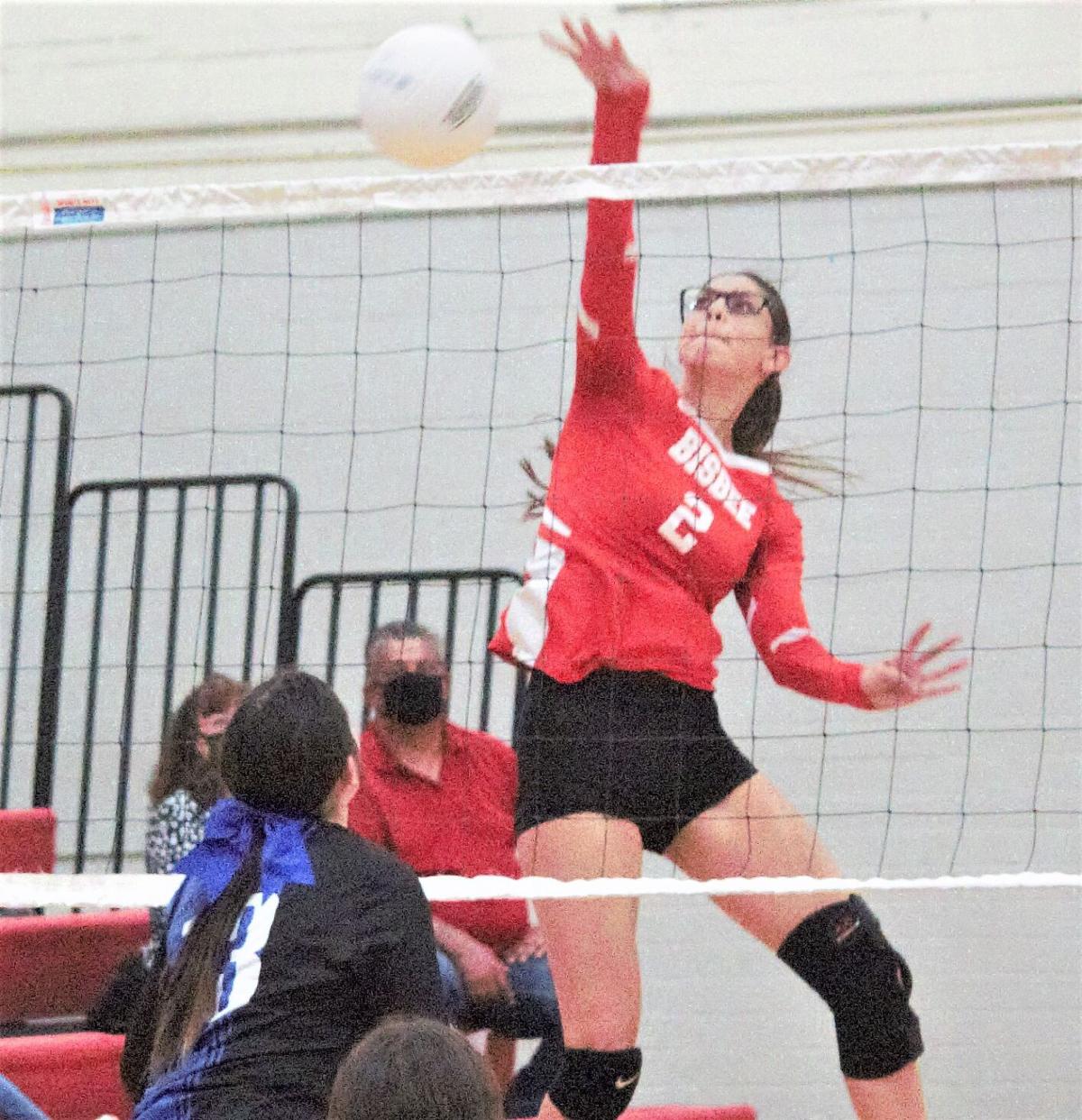 Jimena Valdez knocks down one of her six kills in Bisbee's win over Valley Union Monday night. 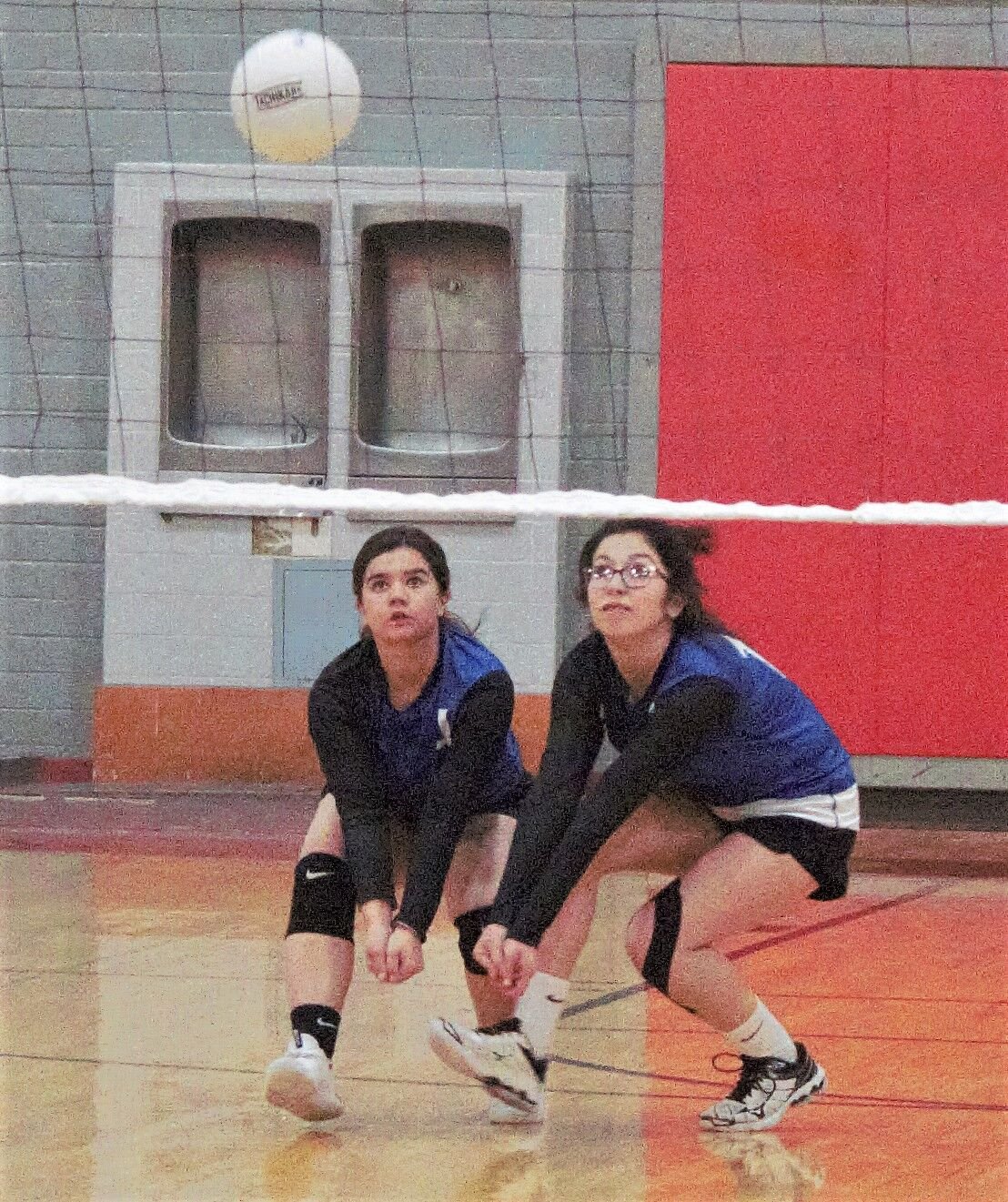 Valley Union's Valerie De La Cruz and Jamie Vasquez converge on the ball before it hits the court Monday night against Bisbee.

Jimena Valdez knocks down one of her six kills in Bisbee's win over Valley Union Monday night.

Valley Union's Valerie De La Cruz and Jamie Vasquez converge on the ball before it hits the court Monday night against Bisbee.

BISBEE — The Bisbee Pumas had reason to celebrate after beating Valley Union 3-0 on Senior Night Monday.

According to Bisbee’s volleyball coach Joni Giacomino, the win over Valley Union should be good enough to get the Pumas, 7-7 overall, 4-6 in region play, into the 2A state playoffs as a play-in team, something they haven’t accomplished since 2000 when she was the head coach.

The official state pairing won’t be announced until later this week but Giacomino is confident the win over Valley Union will keep her team in the top 24 which qualify for state. The state play-in games begin Nov. 10.

Scores from Monday’s match were 25-18, 25-23 and 26-24. Prior to the match Bisbee honored its three departing seniors Jimena Valdez, Audelissia Arreola and Yasmin Morales.

“This was a big win for us tonight,” Giacomino said afterwards. “We knew going into the match a win tonight should get us into the state playoffs.”

Bisbee jumped out to an early lead in game one and never looked back leading from start to finish.

In game two the two teams battled, each never leading by more than four points.

Tied at 21-21, Valdez nailed a kill that gave Bisbee a 22-21 lead. The Pumas added to that lead and led 24-21 when Valley Union responded with back to back points pulling within one at 24-23. A net violation by Valley Union gave the Pumas the point they needed to win game two.

Game three saw the Blue Devils take a 9-5 lead. Bisbee battled back and tied the match at 9-9. Valley Union scored twice to go up 11-9 but back came the Pumas. Valdez’s ace tied the score at 11-11 and a dink from Alexi Lopez gave Bisbee a 12-11 lead. Bisbee would score three more points to lead 15-11.

Valley Union fought back, however, and behind the play of Lizet Sonke and Camily Esquer tied the score at 19-19.

Tied at 24-24 an out of bounds hit followed by a net violation gave Bisbee the two points it needed to win game three and take the match.

“I thought we were on with our passes tonight,” Giacomino said. “We also had some good kills. I felt our serves hurt us. We probably missed close to 20 serves tonight. Normally we are a very solid serving team. Tonight we weren’t.”

Valley Union coach Jenn Casady said her team battled the entire match and that’s all that she can ask for.

“We were missing some players tonight, one of which was our libero so I was shuffling players around,” she said. Casady added the cold bug has hit her team and admitted that her players may have also been looking ahead to Tuesday’s rematch with St. David.

“I’m very proud of this team,” Giacomino added. “They have worked very hard. They deserve this.”