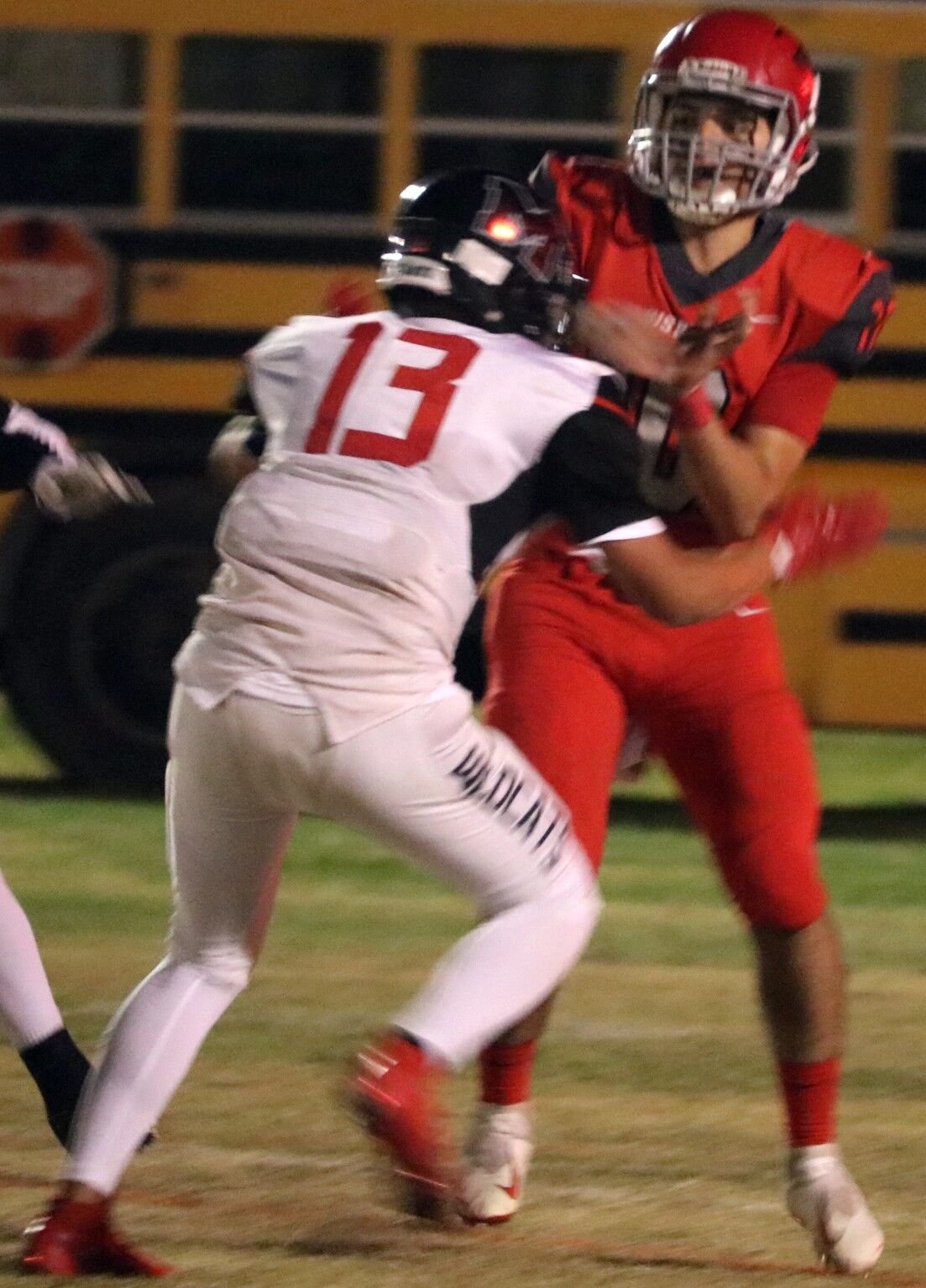 Zergyo Adame gets rid of the ball with a defender quickly approaching. 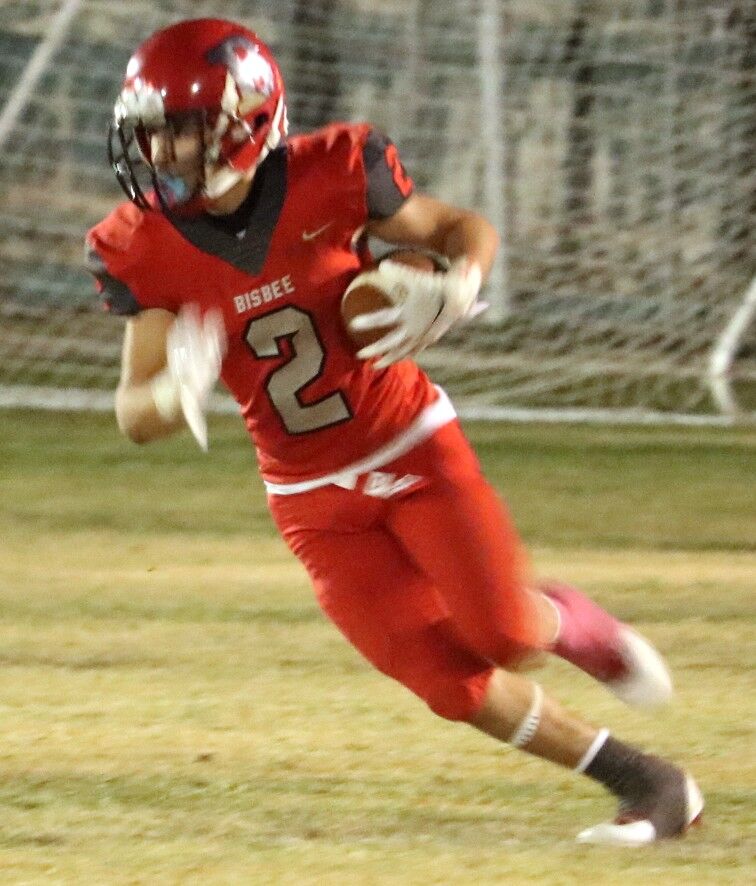 Manny Amaya led the Pumas on defense with 9 total tackles, 8 of which were solo tackles. 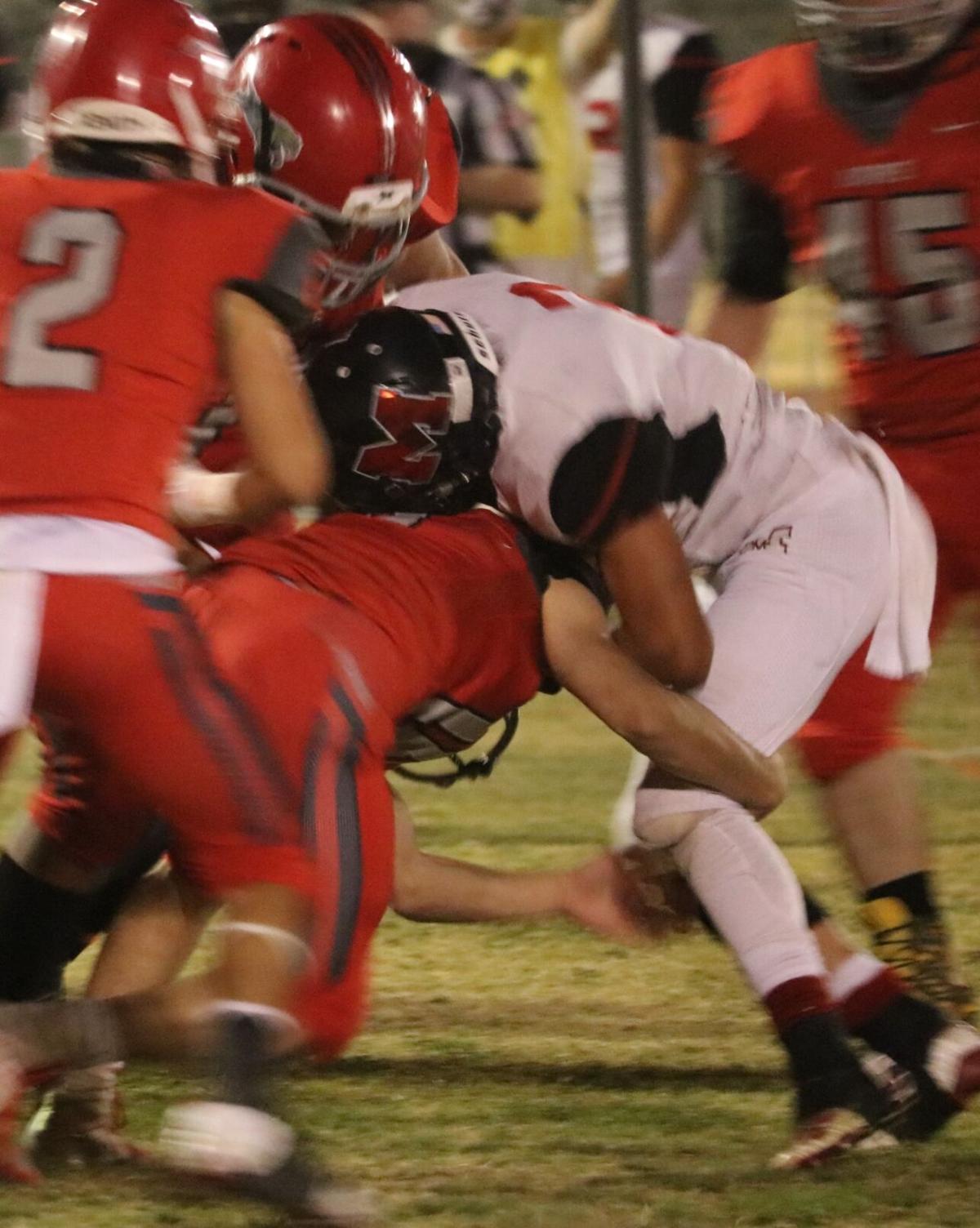 Zergyo Adame gets rid of the ball with a defender quickly approaching.

Manny Amaya led the Pumas on defense with 9 total tackles, 8 of which were solo tackles.

From the first possession the tone was set: who ever won the running game was going to come out on top after four quarters.

Morenci’s defense held Bisbee without points on the first drive of the game forcing Bisbee to turn the ball over on downs at Morenci’s 40 yard line. The Puma defense shut down the Wildcats’ drive by forcing a fumble that was recovered by Tyler Schasteen at the Puma’s 15 yard line with under five minutes to play in the first quarter.

On the ensuing drive, Geoffrey Gribble carried the ball 37 yards to the endzone for the first score of the game. Zergyo Adame’s point after attempt was good to give the home team a 7-0 lead with 1:28 left in the opening quarter. They carried that lead to the second quarter.

Less than two minutes into the new quarter Morenci made its way into the endzone.

L.T. Morey dove into the endzone off a short run and the made extra point tied the game 7-7 with 10:03 to play in the second quarter. Morey had three touchdowns and completed two-point conversion in Morenci’s win. Less than four minutes later the Wildcats were into the endzone again on another run. Christian Contreras blocked the point after attempt for the Pumas but the Wildcats still lead 13-7 with just under seven minutes to play in the half.

Four minutes later the Pumas responded with a touchdown of their own. Gribble broke multiple tackles and rushed his way 48 yards for his second touchdown of the game. Adame made the point after attempt to give Bisbee the one-point advantage, 14-13, with 2:04 left in the half. Gribble had 14 carries for 138 yards and two touchdowns in the game.

Morey and the Wildcats responded with a big play and touchdown of their own 25 seconds later. Oray ran 51 yards into the endzone for his second touchdown of the game. Morenci’s two-point attempt was stopped by the Bisbee defense. The visiting team led 19-14 with 1:43 left in the half. Bisbee could not score before the intermission and trailed by five points.

“They were able to wear us down defensively in the third quarter and control the clock,” Vertrees said. “At the end of the day I got out coached in the second half this week. I have to do better for us down the stretch. These are the growing pains of no off-season work, but our guys are continuing to battle through it.”

Morenci added two touchdowns and a completed two-point conversion to their score in the final frame, while Bisbee was held scoreless and struggled to generate offense. Morenci was able to contain Gribble and the Bisbee run game throughout the second half and were successful in keeping the Bisbee defense on the field most of the half.

Manny Amaya led the Pumas on defense with nine total tackles, eight of which were solo tackles.

EJ Hernandez and Christian Contreras were right behind him with seven tackles each.

Bisbee, now 0-3, take on 2-0 Benson on Friday. The Bobcats did not play on Friday because Pima, their scheduled opponent, canceled due to COVID-19.

“We are getting healthy and getting ourselves figured out, but we have to start putting it all together with a shortened season working against us,” Vertrees said. “We just have to keep focused and realize we don’t have time to lick our wounds, because Benson is gonna be ready for us regardless. I’m confident our guys will show up to work on Monday and we will prepare for a really good team and a really good coaching staff on Friday.”