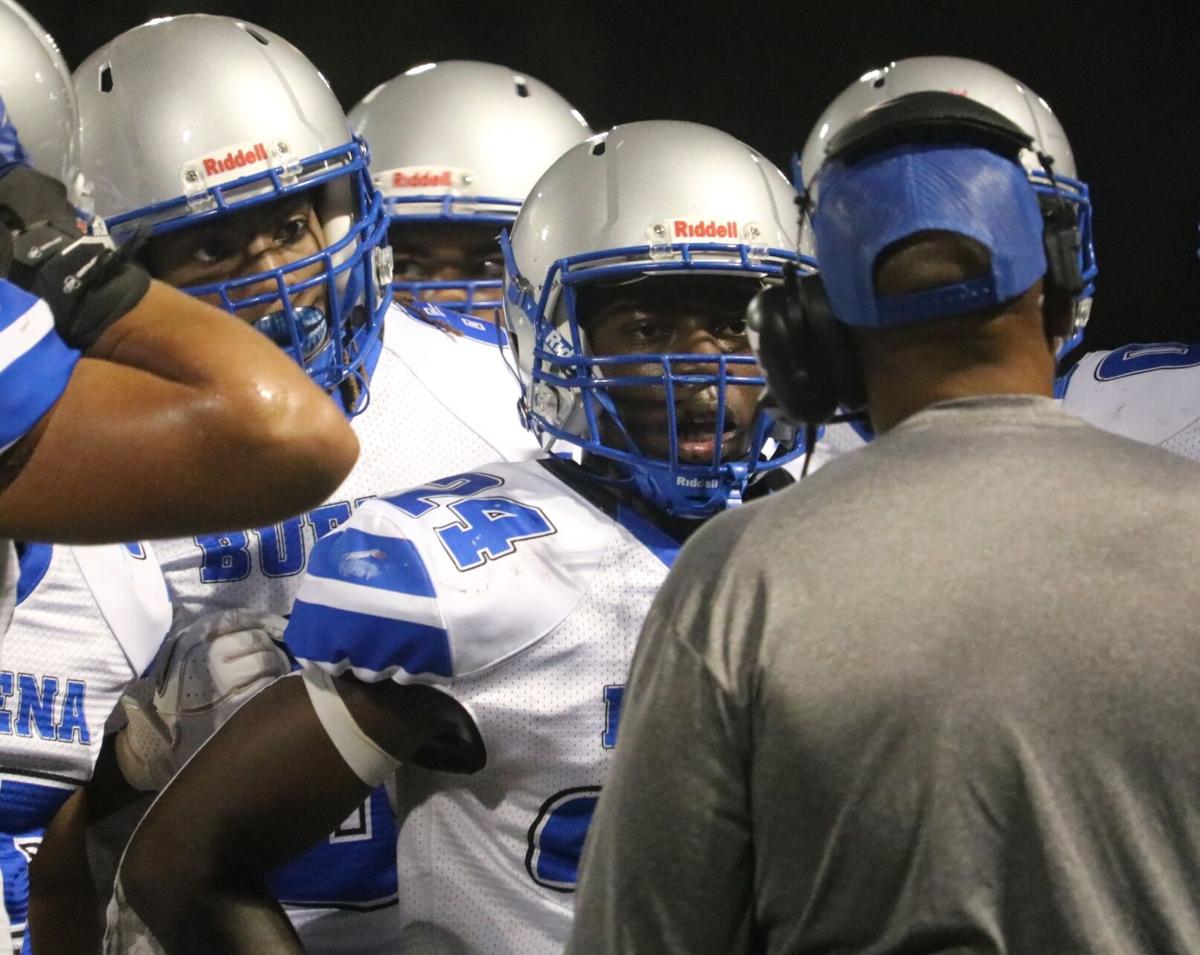 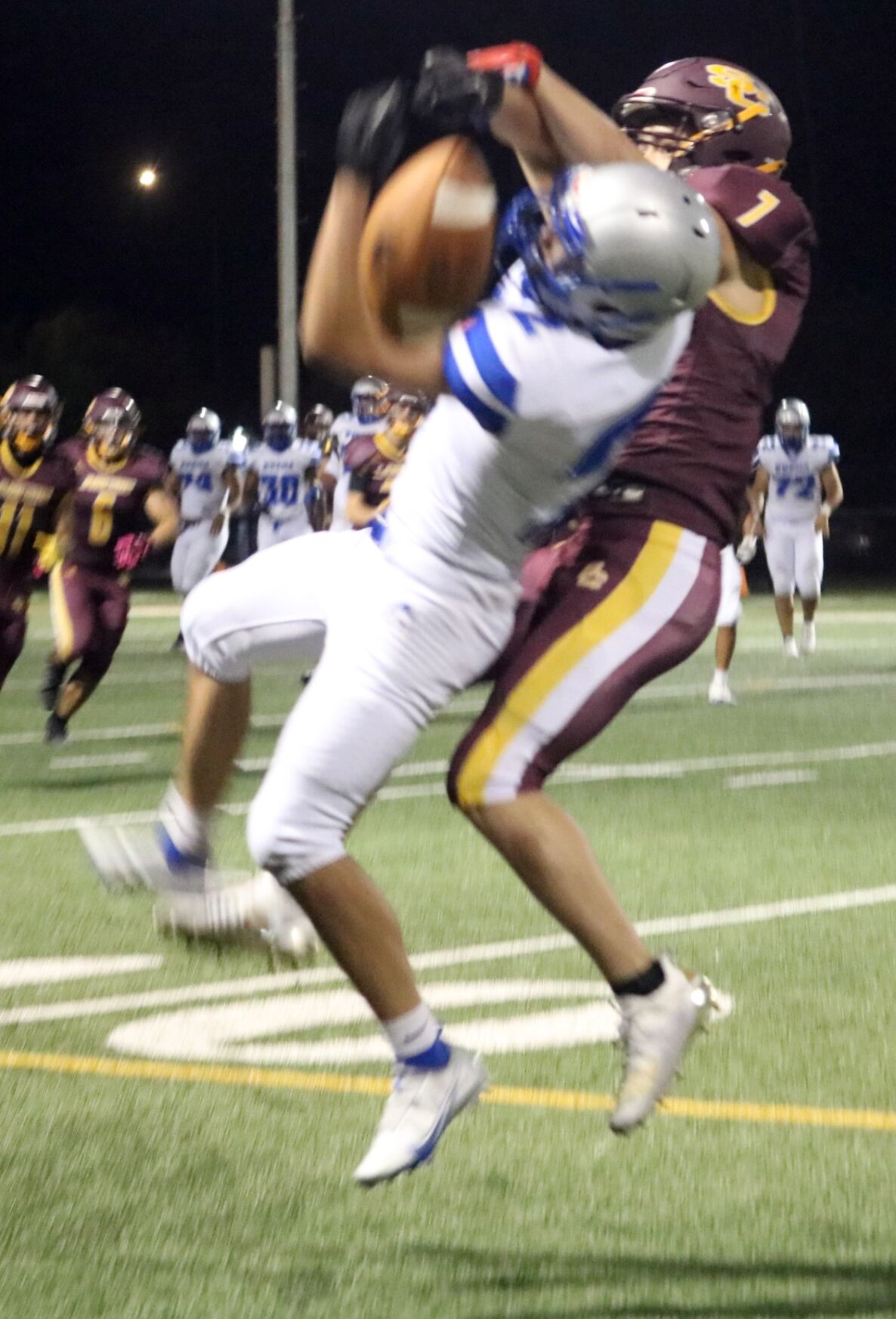 Alexander Bermudez goes up for a catch attempt in Friday's loss at Salpointe. 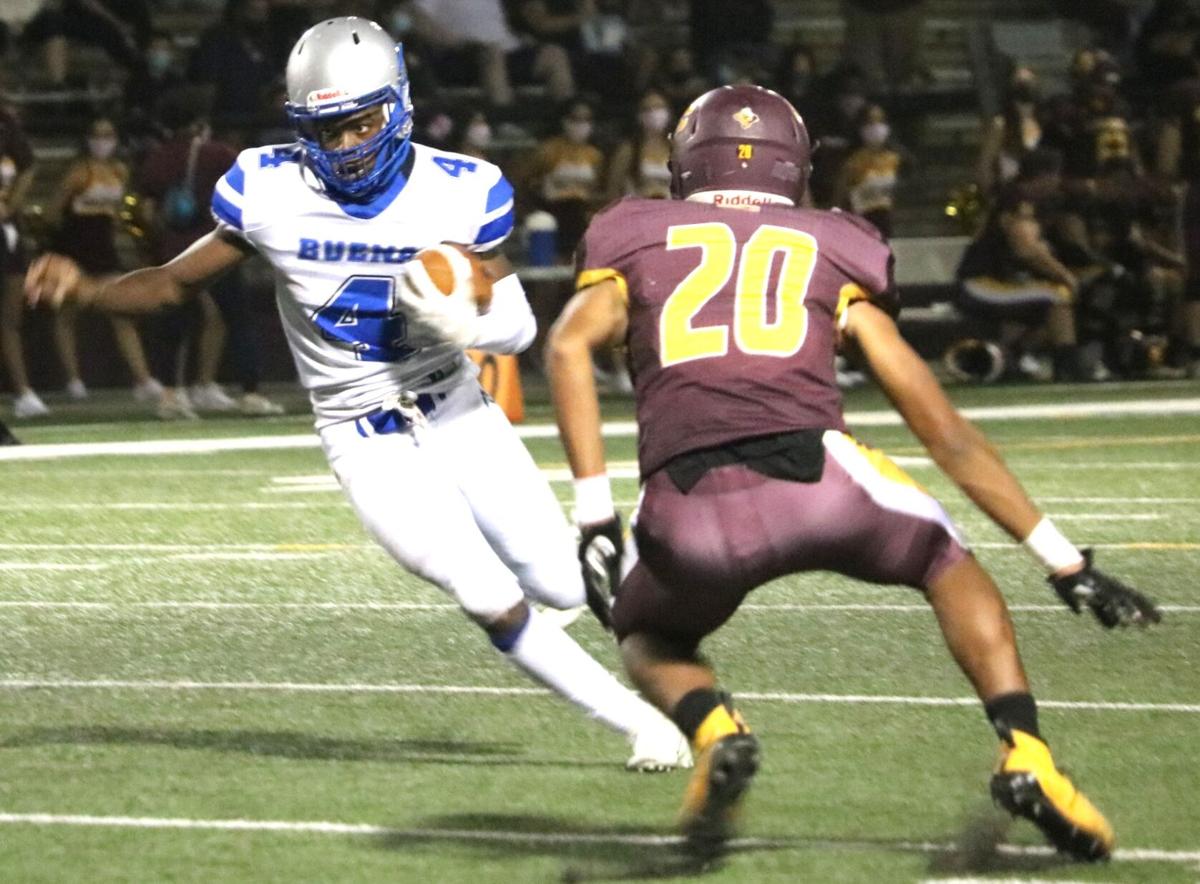 Alexander Bermudez goes up for a catch attempt in Friday's loss at Salpointe.

TUCSON — Buena football lost its first game of the season Friday night 37-6 at Salpointe Catholic High School. The Colts, who hadn’t played since Oct. 9, looked flat-footed and struggled with the fundamentals to a team that had quarantined for 14 days.

The only thing Buena head coach Joe Thomas could say about his team to the Herald/Review was that the offense was nonexistent and turning the ball over repeatedly isn’t how to win games. The Colts completed just two passes in the loss.

Buena had five interceptions and three fumbles. The team also used four different players at the quarterback position after starting quarterback Austin Grimm was sidelined in the second quarter due to an injury after taking a big hit on Salpointe blitz.

Trouble started early for the Colts, as Grimm was picked off on their first drive of the game at the Colts 40-yard line. Salpointe couldn’t capitalize on the turnover and missed a 34-yard field goal attempt. Later in the quarter, Grimm was picked off again, this time by Julian Robles, who took the ball 56 yards for the game’s first touchdown. The Lancers led 7-0 with 2:49 to play in the first quarter. They carried their lead into the second quarter.

The Lancers kept the momentum in the second quarter. They added to their lead on a 26-yard pass into the end zone with 9:10 left in the half. The made point-after gave the home team a 14-0 lead. Later in the quarter Jelani Brown snagged a Lancer pass and returned it 26 yards to put the Colts in Lancers territory. On the ensuing drive, Tory Walters fumbled at the 1-yard line and Salpointe recovered. Salpointe led 14-0 at the end of the first half.

The Lancers put the game out of reach in the latter half of the third quarter. The home team scored their its third touchdown with 6:55 to play in the quarter and the made point-after attempt made the score 21-0. Nick O’Donnell threw an interception on his first pass of the season after replacing Grimm, 50 seconds after the Lancers’ touchdown. Salpointe made Buena pay with another touchdown and extra point to lead 28-0. Keyon Taylor took over at quarterback on the next Colts’ drive.

Two minutes into the fourth quarter Salpointe added to its lead with a 32-yard field goal to make the score 31-0. Less than two minutes later Taylor was picked off at the Colts’ 48-yard line. Buena’s defense held Salpointe to keep it off the scoreboard. Tory Walters, who rushed for 130 yards, got the Colts offense moving with a 57-yard run to the Lancers’ 23-yard line. Buena’s field goal attempt was blocked. Jason Newton returned another Buena interception for a touchdown. The Lancers missed the extra point but held the 37-0 advantage.

On the last drive of the game William Stemler was given the green light at quarterback.

“Coach Thomas said throw it as far as you can and it worked,” he said.

Defensively, Buena was led by Elijah Locklear who had three tackles, one assist and two sacks. Austin Cox had four tackles and six assists.

“We learned a lot from this,” Stemler said. “We have to be a team. It’s Buena, not one person.”

The 2-1 Colts travel to Casa Grande Friday for another tough matchup.