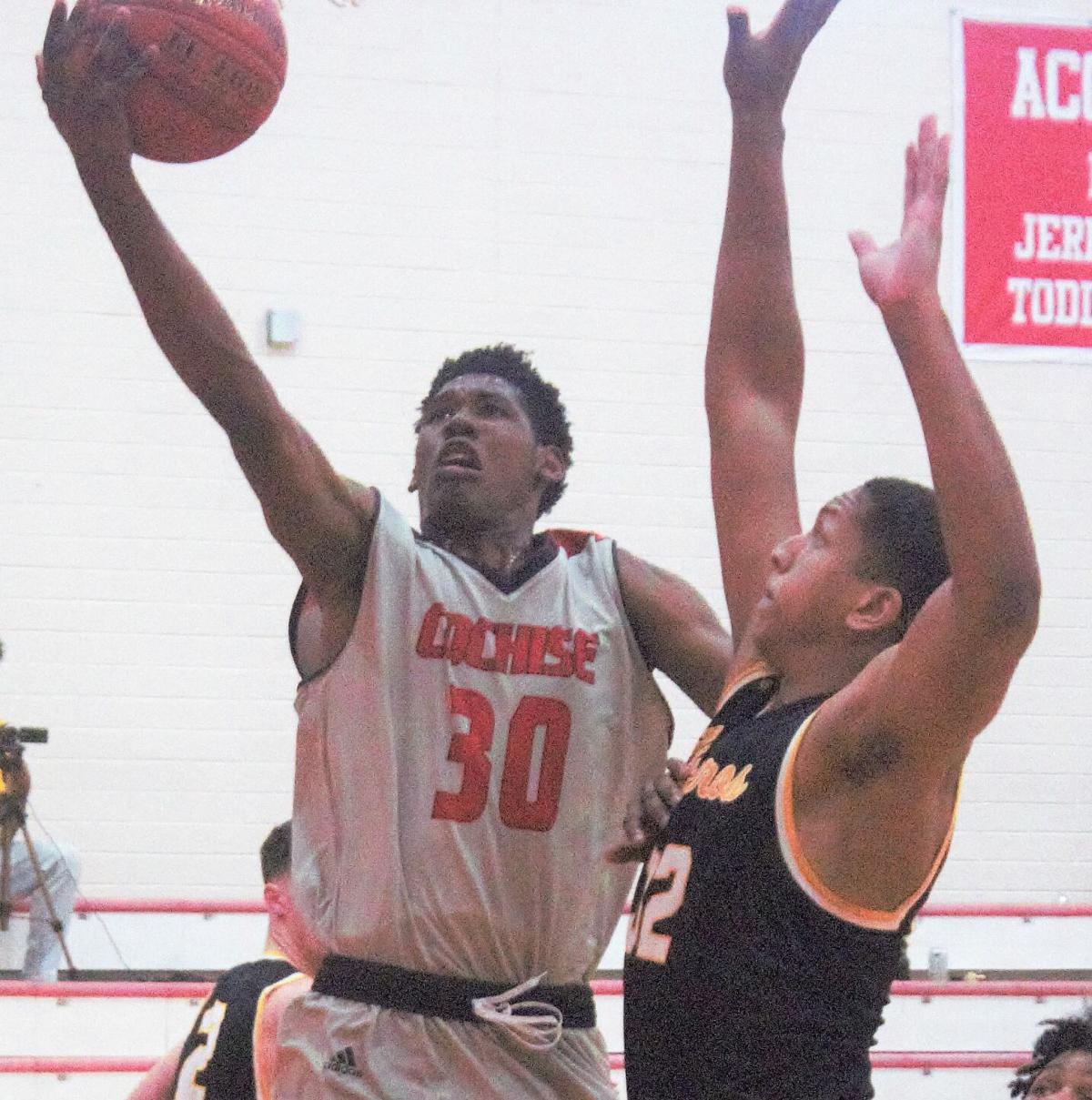 Jalun Trent puts up a shot for Cochise in the first half Saturday against Central Arizona College. 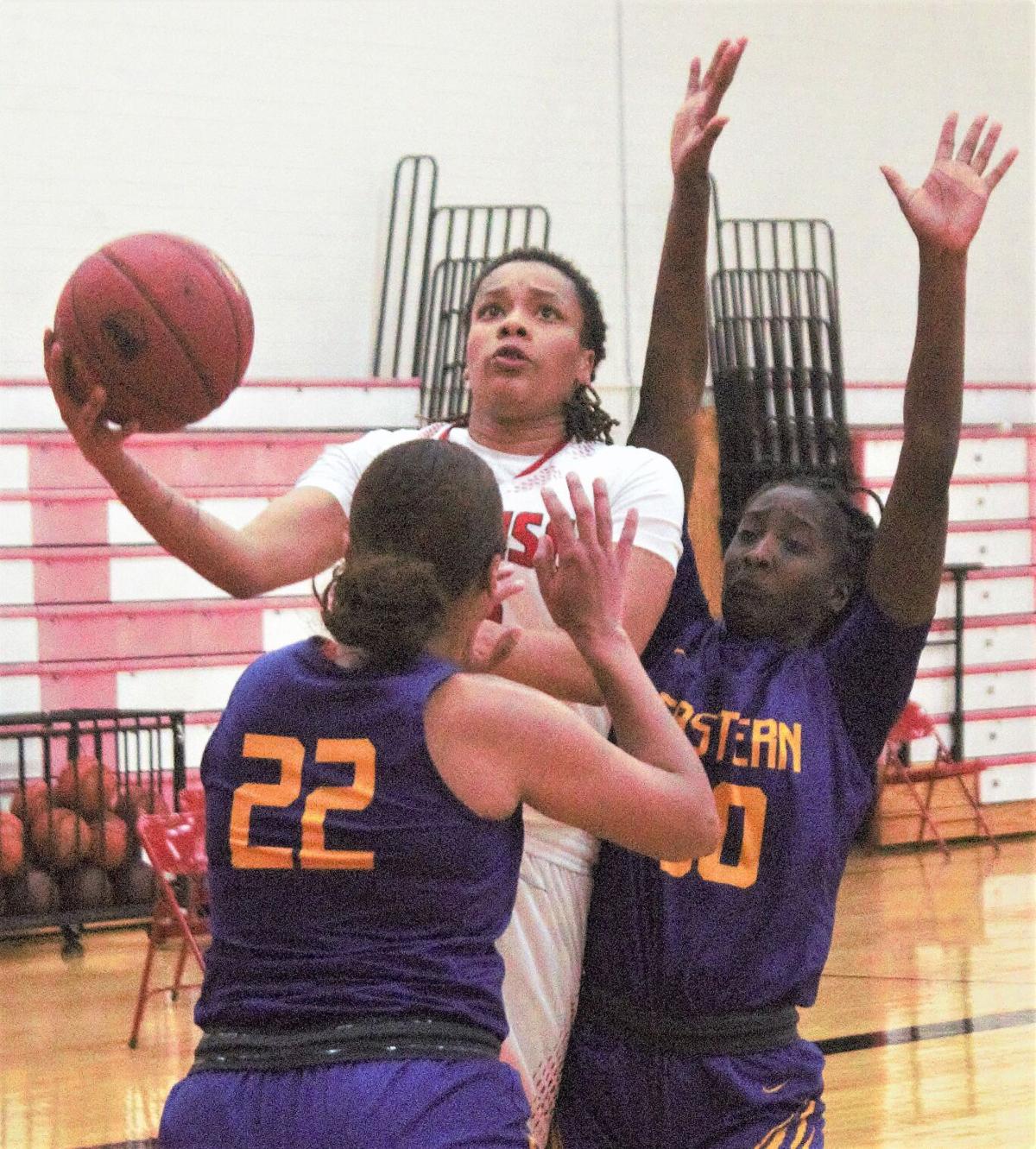 Cochise College's India Perry fights off a couple of Eastern Arizona College players as she drives hard to the basket to score two of her team high 14 points Saturday.

Jalun Trent puts up a shot for Cochise in the first half Saturday against Central Arizona College.

Cochise College's India Perry fights off a couple of Eastern Arizona College players as she drives hard to the basket to score two of her team high 14 points Saturday.

DOUGLAS — The Cochise College men’s basketball team picked up its first win of the season and snapped a two-game losing streak in the process knocking off Central Arizona College 82-66 in a Saturday afternoon matinee inside Cochise Stronghold.

According to Jerry Carrillo, head coach of the Apaches, Saturday’s matinee was the first in the history of Cochise College basketball thus eliminating the “Saturday night in the Stronghold” experience that he says is like none other in JUCO hoops.

In the women’s game that was held prior to the men’s game, Cochise was scheduled to host Central, the defending Region 1 champions. COVID-19 has impacted the start of the Vaqueras season, however, so Eastern Arizona College from Thatcher came to Douglas for a non-conference game instead and left with a 83-63 win while handing Cochise its second consecutive loss.

The Apache men led from start to finish Saturday, leading by 10 at the midway point of the first half eventually padding that lead to 21-11 as Brian Rios drilled a three-pointer.

Central countered with a 9-2 run clawing back to within three.

The Apaches fought off the surge and went on to lead to 37-28 at the intermission.

Cochise would pad its lead in the second half. Back to back buckets by Stphen Byard would help the Apaches take what would be their largest lead of the night at 72-50.

Sophomore Patrick Samoura who garnered a double-double finishing the night with 15 points and 11 rebounds. Byard added 17 points and pulled down seven rebounds. Rios chipped in 14 points, 12 of which came from beyond the arch. Cochise County product Quay Gentry added 13 points, while freshman Jonathan Garcia also chipped in 13 points off the bench, bolstering a very balanced offensive attack for the Apaches, 1-1 in ACCAC play and 1-2 overall.

“As a staff we are very excited about this group,” Carrillo said after the game. “It was so good to see our guys build on the defensive effort we had on Tuesday night in our loss versus Arizona Western College. We came out and defended with pride and we were able to move the ball in transition. To have five guys score in double figures really shows that sharing the ball and ball movement lead to success. Jalun Trent really is getting better daily about pushing the ball and getting the defense on its heels. Hopefully we can continue to use practice time to improve and get our guys to move the ball and eliminate so many odd ‘Hero Plays’ that just kill offenses. Also, Samoura is just really working so hard on the defensive end and is rebounding the ball at such a high clip. He really helps our team in so many ways.”

In the women’s game Saturday, Cochise saw a 14-11 first quarter lead turn into a 35-28 halftime deficit as Eastern outscored the Apaches 24-14 in the second quarter.

Eastern padded to its lead in the third outscoring Cochise 25-15 taking a comfortable 60-43 lead into the fourth quarter.

Cochise officials were informed Sunday that Pima had cancelled its ACCAC game with Cochise that was scheduled for Tuesday in Douglas. This is the second time in three weeks Pima has cancelled its game with Cochise. The Apaches are now off until Feb. 16 when they host Eastern Arizona College in a 7:30 p.m. game inside the Stronghold Gymnasium.