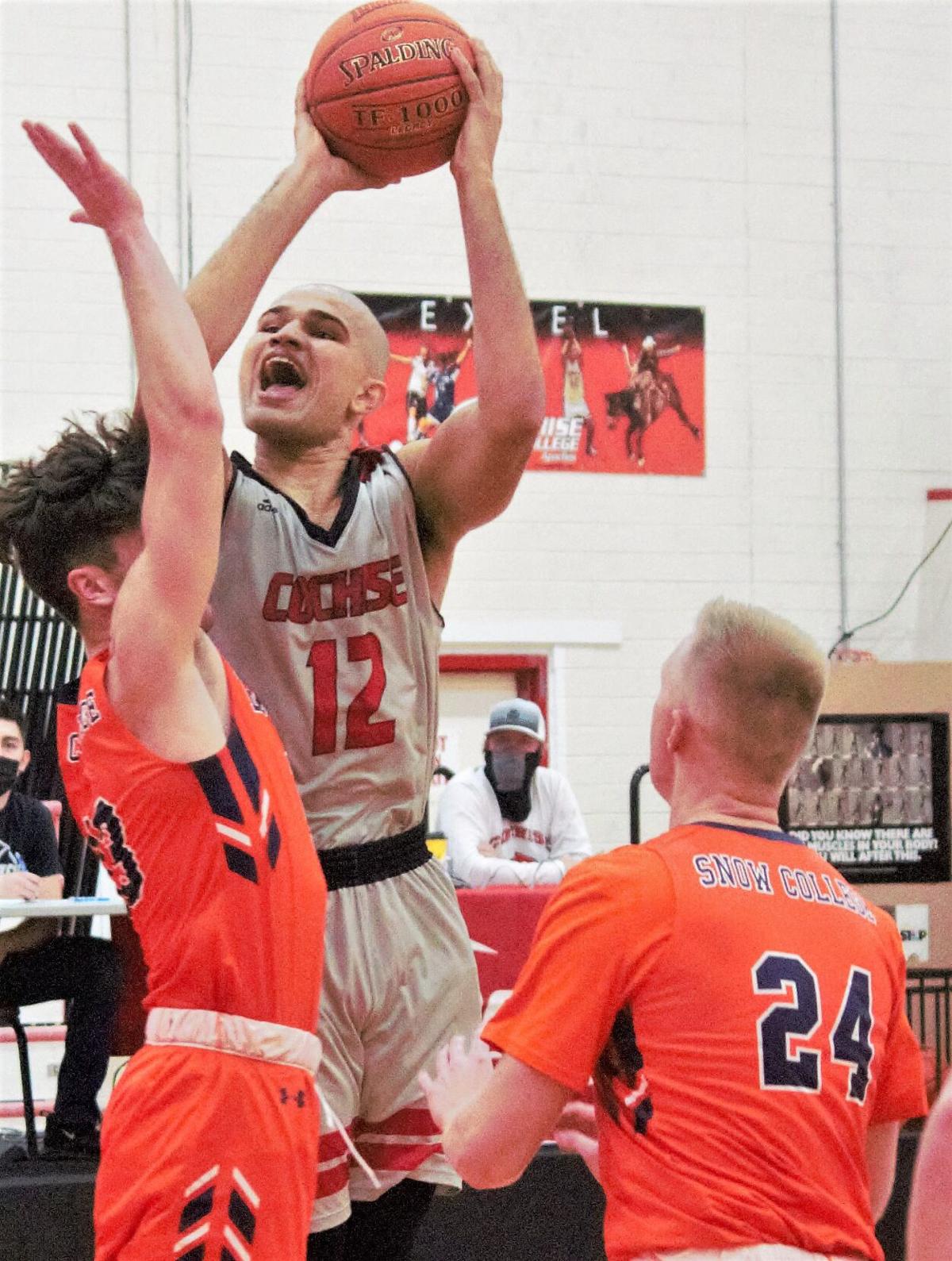 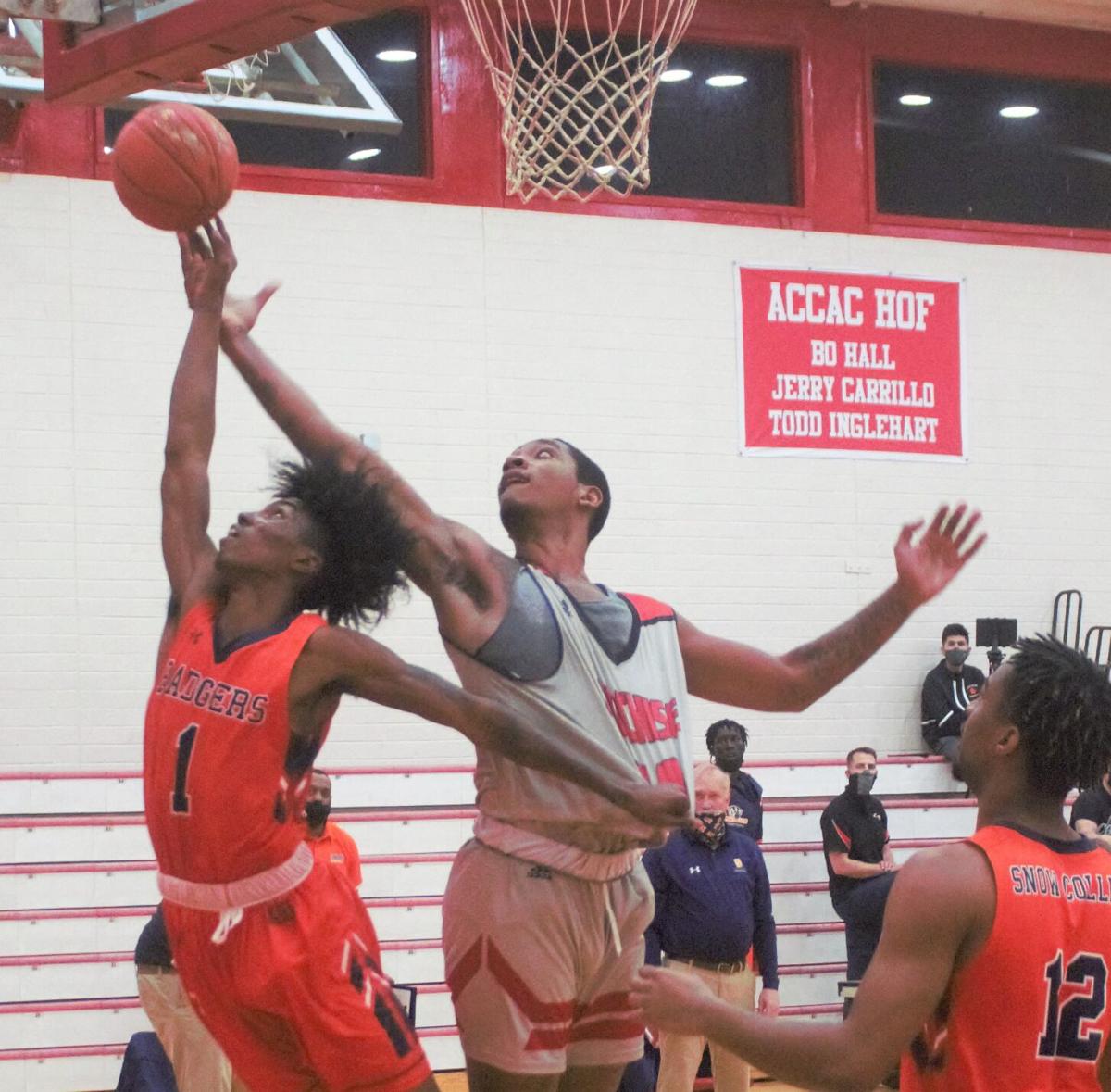 Ray Davis of Snow College and Stephen Byard of Cochise College battle each other for the rebound Friday night in the Apaches season opener at Cochise College's Douglas Campus.

Ray Davis of Snow College and Stephen Byard of Cochise College battle each other for the rebound Friday night in the Apaches season opener at Cochise College's Douglas Campus.

DOUGLAS — Playing in front of no fans and only those working the game in attendance, the No. 23 nationally ranked Cochise College Apaches kicked off the 2021 basketball season Friday night with an 88-67 loss to Snow College of Utah in Cochise Stronghold.

Snow College kicked off its season two nights earlier, falling 86-80 to Arizona Western. On Saturday, the Badgers were in Coolidge facing Central Arizona College for what was their third non-conference game in Arizona in four days.

The Apaches opened up Friday’s game drilling back-to-back three-point baskets courtesy of Buena’s QuayShawn Gentry and Kyle Moore of Jonesboro, Arkansas, to take a 6-0 lead. Moments later Snow College responded with a three for its first points of the night making the score 6-3.

Kalup Crane’s pair gave the Apaches an 8-3 lead for what would be their largest lead of the night.

Snow College led 20-19 at the midway point of the first half but found itself trailing once again a few minutes later as Jonathan Garcia’s 3 put Cochise back in front 26-23 with seven minutes remaining.

Cochise was hampered by poor transition defense in the last five minutes of the first half and three straight Cochise turnovers resulted in points for Snow, which went on a 13-2 run, increasing its lead to 36-28.

Up by 12 late in the first half, Garcia’s bucket in the closing seconds cut Snow College’s lead to 42-32 at the intermission.

The Badgers came out strong in the second half, scoring on their first six possessions to push the lead, ahead 74-48 at the midway point of the second half.

Garcia and Stephan Byrd, freshmen who came off the bench, each scored 14 points respectively to lead the Apaches. Gentry chipped in 13 points in his first career start as a sophomore.

“What a great experience for our guys to get a non-conference game prior to starting our 16-game ACCAC schedule next Tuesday,” Apaches head coach Jerry Carrillo said after the game. Carrillo kicked off his 26th year as head coach. He has amassed 560 wins.

“Again, I feel it really needs to be stated, we are grateful to our administration and our athletic training staff for putting this together for us to have a season,” Carrillo noted. “Many NJCAA and NCAA programs are ‘opting out’ this season, but we are getting to play. We also need to thank Snow College for coming to Arizona and playing. Tonight we saw that Snow has about 60 practices and four live game scrimmages ahead of us, as they were able to practice all fall ’20 semester. As a coaching staff we need to communicate to our guys the importance of ‘honoring the process’ and getting better each day on the practice floor. At times tonight we looked like we only had approximately 15 days of practice. We are very excited to work with this group of young men and see where they take us this season.”

Carrillo said Associate Athletic Director Guy Meyer, head trainer Sierra Williams and assistant trainer Whitney Wilson did an outstanding job of setting up Stronghold Gymnasium for the first game of what can only be described as the COVID season. Friday night also marked the return of former Sierra Vista graduate and former Cochise player and assistant coach Derek Lane to the sidelines.

“He is a winner and legend in these parts,” Carrillo stated.

Cochise heads to Pima Community College Tuesday for an ACCAC showdown. Tipoff is scheduled for 7:30 p.m. Much like at Cochise, fans will not be allowed to attend the game.