Mitch Nelson, Douglas' athletic trainer, works with some DHS athletes on a turf field that was recently deemed unsafe. 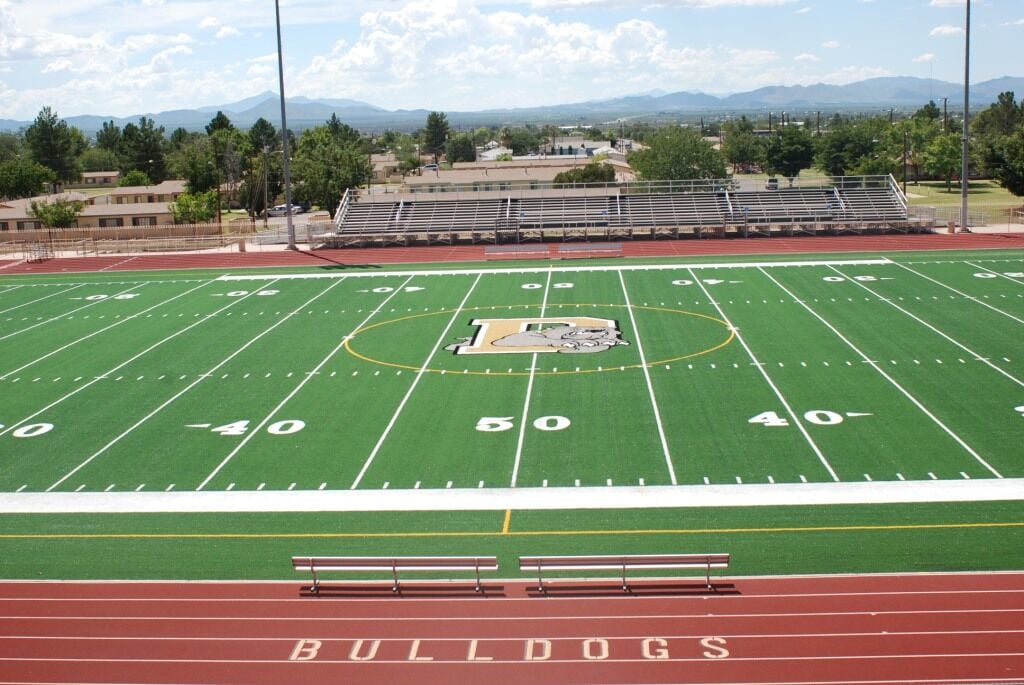 This is how the artificial turf field looked after it was installed in 2010. 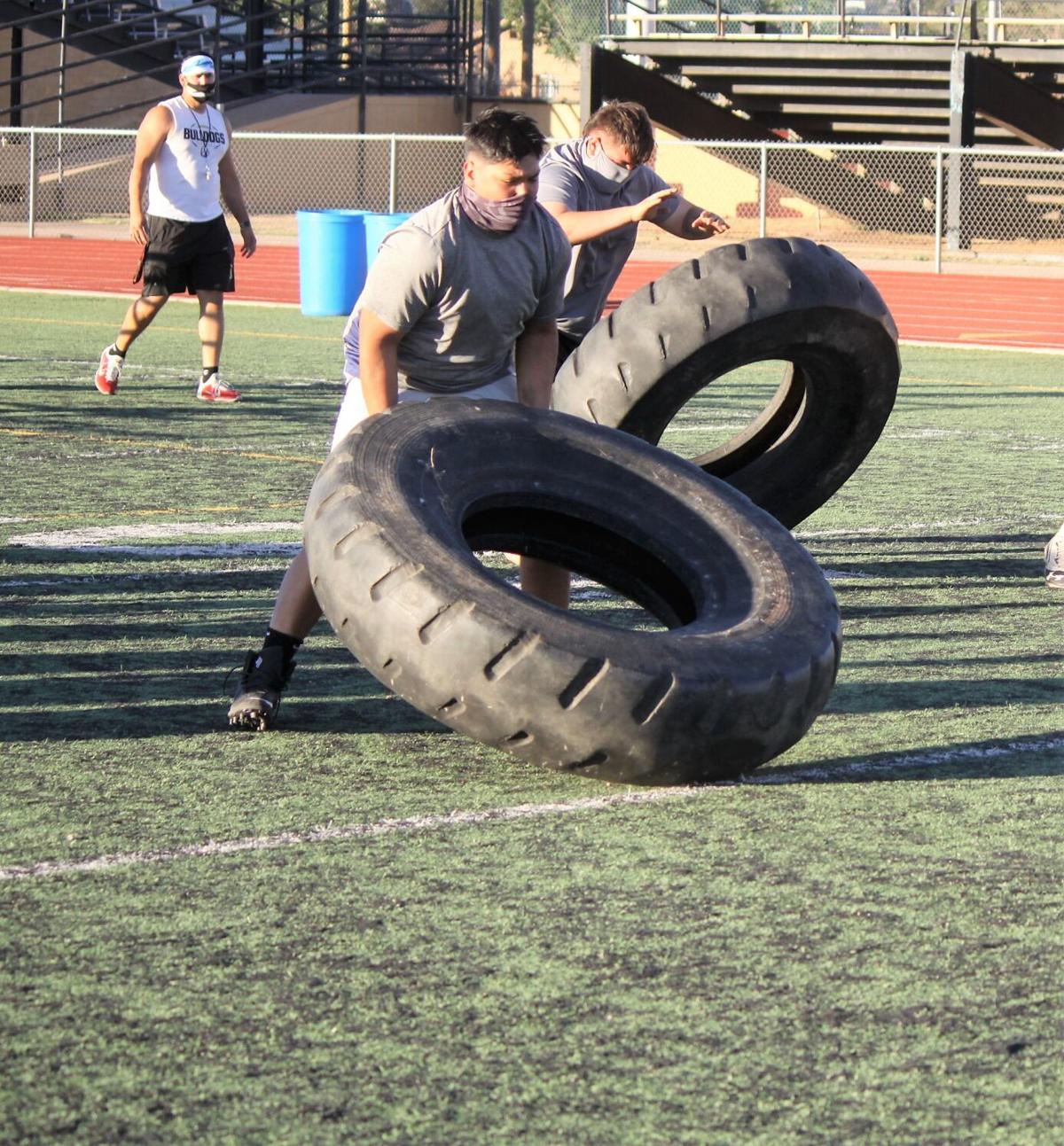 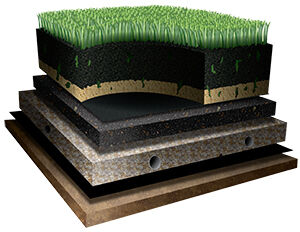 The layers of padding Hellas Construction will put beneath the turf. The padding is guaranteed for 25 years.

Mitch Nelson, Douglas' athletic trainer, works with some DHS athletes on a turf field that was recently deemed unsafe.

This is how the artificial turf field looked after it was installed in 2010.

The layers of padding Hellas Construction will put beneath the turf. The padding is guaranteed for 25 years.

DOUGLAS — Douglas High School is getting a new modern type of synthetic turf football field, which will be ready for the Sept. 10 season opener with the Bisbee Pumas.

The Douglas school board approved the request, which is going to cost $844,000 to install, at its July 6 board meeting after learning the existing turf the Bulldogs currently play on was installed in 2010. The turf was worn down to the point where it was becoming an increased danger to the players.

An eight-year loan, with no down payment being required, is being provided to the district through Hellas Construction of Austin, Texas, which was selected to install the new turf beginning July 21. DUSD will pay a little more than $100,000 per year beginning in July 2022. Included in the fee the district is being charged will be the equipment needed to help maintain the field. It also includes an eight-year maintenance plan in which Hellas will come to Dougls once a year and perform a “deeper” maintenance of the field.

In 2010 voters approved a bond that allowed for the turf to be installed at Armando de Lucas Stadium, in addition to building a new field entrance to the stadium, locker room facilities, a trainers room and a concession stand in addition to roof repairs done at various schools around the district.

“We are not going to be raising the property tax to pay for this turf,” Soto said. “As I see it, this is another piece of equipment or building that belongs to the district and depreciates over time. This is something that I will need to budget for on a yearly basis. This will also not affect our M&O (maintenance and operations) budget. We will not have to reduce salaries because of this expenditure. This will come from capital monies which we get from the state for capital expenditures.”

Ray Borane, president of the DUSD board, said he wanted residents to understand this is not a double expenditure.

“We do not have two concurrent expenses with this,” he said. “The taxpayers are already taking care of it on the other end for the other field.”

DHS officials state the current field had an eight-year warranty, which was standard when purchased. In its 12th year of use, the warranty has expired, but before that the field was “fluffed” and pellets were moved around the turf, which helped prolong its life, the board was told.

A recent inspection of the turf revealed it was in need of repair. A more in-depth inspection revealed there was no padding between the turf and the dirt and rock beneath it.

The recommendation from the district administration, which was unanimously approved by the board at the meeting, was for Hellas Construction to come in and replace the existing turf with a matrix synthetic turf.

According to its website. Hellas has installed numerous high school, college and NFL fields throughout the U.S.; two of the more notable fields are AT&T Stadium in Arlington, Texas, home of the Dallas Cowboys, and the field the Las Vegas Raiders play on at Allegiant Stadium.

Chris Chartier, a representative from Hellas Construction, was at the board meeting addressing any questions the board or members of the community had regarding the turf replacement.

Kevin Smith and Dr. Kristine Gomez expressed concerns over the investment into new turf when there is still a balance due on the bond and what assurances would be made to ensure this installation would be done correctly and who would be accountable if there are problems.

Chartier stated that he would see that the turf was installed properly.

Soto reiterated this expense would come out of the capital budget and that the secondary property tax be affected.

The Bulldogs football team will move its summer workouts from the field at Armando de Lucas Stadium to the practice field behind the DHS gymnasium.

The PPT (Peak Performance Testing) program, which concludes at the end of the month, will also be relocated to another field.

Douglas was scheduled to host Nogales in a preseason football scrimmage Aug. 26. Angel Ortega, athletic director at DHS, states that location has since been switched to Nogales this year because of the installation. Douglas will host the Apaches in 2022.

“We are very excited,” Hunter Long, Douglas football coach, said about the new turf. “It is something I’ve been wanting addressed since taking this position so to now have the wheels moving on this project we are very anxious to see the end product. We thank our school board and administrators for making this possible. The field was in much need of a makeover and we all look forward to proudly displaying it to our community at our home opener against Bisbee.”