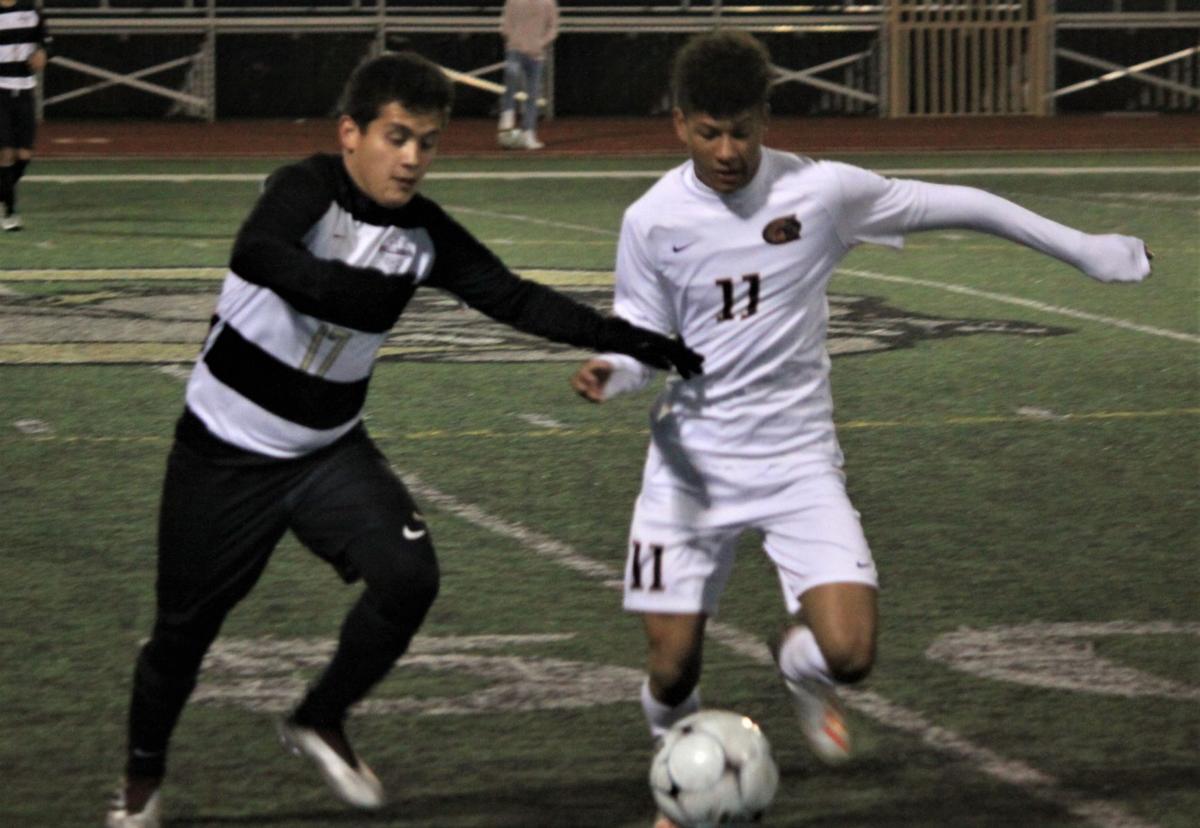 Marco Buelna battles a Pueblo player for the ball in the first half of the Bulldogs match with Cienega last week.

Marco Buelna battles a Pueblo player for the ball in the first half of the Bulldogs match with Cienega last week.

State playoff pairings, that were anticipated to be released over the weekend, will be released Tuesday afternoon as Salpointe, the No. 2 team in the state, as well as several other 4A schools, still have a match to play on Monday, Feb. 10 which could affect the playoff match ups.

“What we have done so far is something special,” Douglas’ coach Alfonso Romero said after Thursday’s match secured the undefeated regular season. “Coach Ramos and myself, we’re really proud of the boys. These kids have improved, they were hungry, they’re still hungry, and things are going our way so far. All 19 of these guys know how proud we are of them. This has been a team effort. Everybody has put a little bit into what we’ve accomplished. Everybody can feel proud for now, but they also need to start getting ready for what’s next, the state playoffs.”

In the match with Cienega, Miguel Sosa’s goal off a Brian Archer assist gave Douglas its first lead of the night, 12 minutes into the match.

Fourteen minutes later, Joaquin Escalante scored, off an Adrian Arciniega feed, giving the Bulldogs a 2-0 lead at the half.

When play resumed in the second half, Oscar Valenzuela scored off a corner kick from Escalante, giving Douglas a 3-0 lead. Cienega scored a short while later, making the score 3-1.

On Tuesday, Feb. 4, the Bulldogs were in Tucson, where they knocked off Pueblo 3-1.

Escalante scored the first goal of this match off an assist from Sosa. He then scored again, this time on an assist from Armando Gym, giving Douglas a 2-0 lead at the half.

Pueblo scored the opening minute of the second half, cutting the Bulldogs lead to 2-1. Archer later scored for Douglas, making the score 3-1. Douglas outshot Pueblo 12-5; Loreto had three saves at goalie.

The night before, Monday, Feb. 3, the Bulldogs were at CDO for a match. At first the score was reported 8-0 in favor of CDO, leaving many Bulldog fans wondering what had happened. Douglas coaches quickly fixed the error and reported the Bulldogs had actually won 8-0. Highlights from their match even made the KVOA sports that evening. Konnor Comier and Arciniega were also interviewed.

Douglas led 2-0 at halftime of this match as Escalante scored off an Arciniega assist. Arciniega then followed with a goal off a Sosa feed.

In the second half, two goals from Sosa, Arciniega, Escalante, Canete, and Solano, gave the Bulldogs an 8-0 lead and allowed the match to end 12 minutes early, thanks to the AIA’s new mercy rule that stops a match when a team is up by eight goals or more.

Coach Romero said it feels good going into state knowing he has up to two home matches, but he’s also aware it’s one match at a time and his Bulldogs cannot be looking past their first opponent.

The coach said its going to be nice to have a week off to get ready and also heal some bumps and bruises the kids have.

“We’ve set ourselves up in the best position possible, which was our second goal,” the coach said. “The first goal was to win the region for the third straight year, the second goal was to go to state and host a first-round game or two. Finishing in first place has done that. Can’t tell you how proud I am of these boys.”

On the down side of all of this was saying goodbye to 14 seniors who were part of Ken Cormier’s last team. Coach Romero said he knows the coach is watching over this team and smiling at the success they’re enjoying.

Per the late coach, “For whatsoever you do, do it with all your heart.”

In the second half, Cisneros scored off a Corrales assist and Diego Luevano had an unassisted goal.