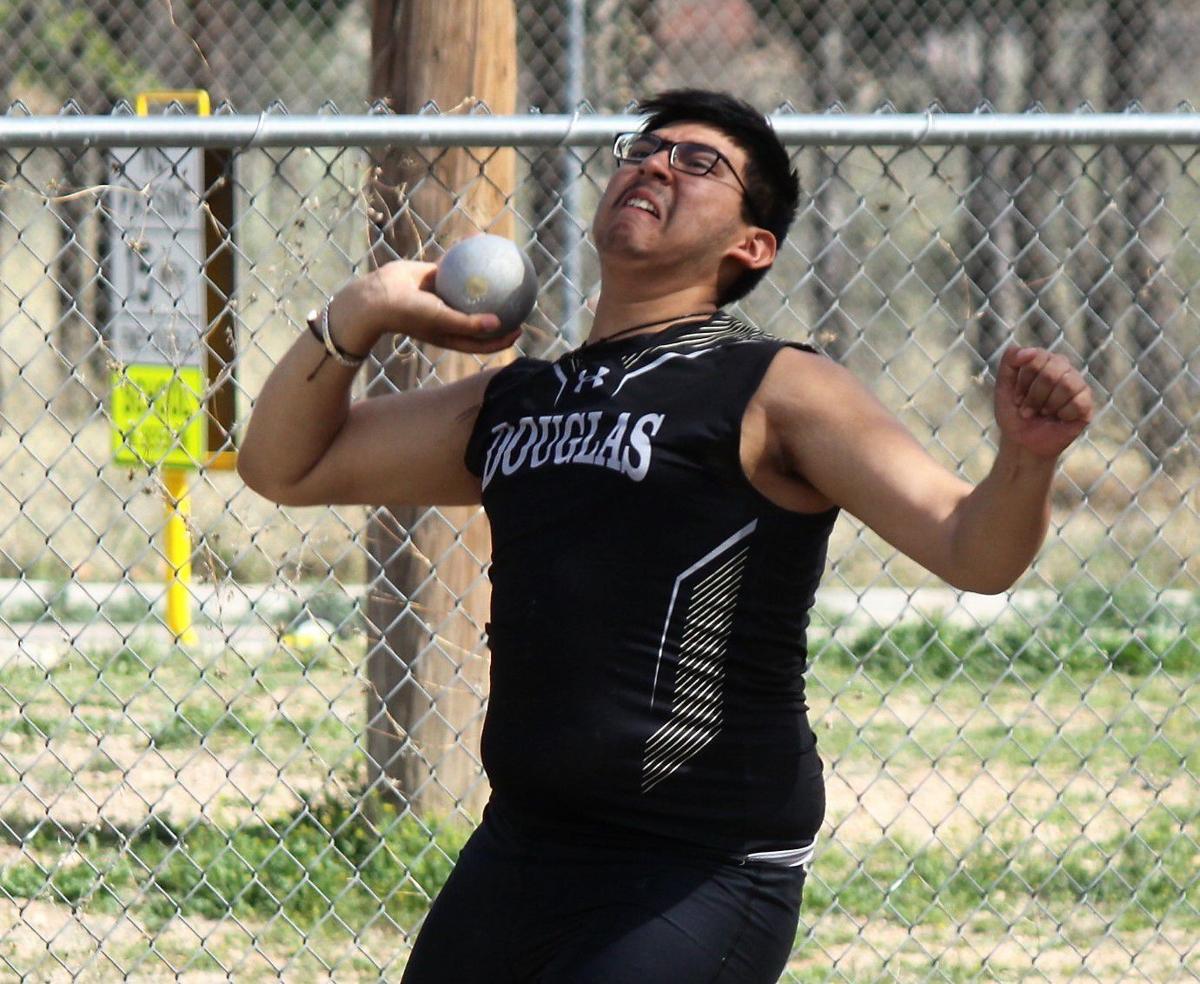 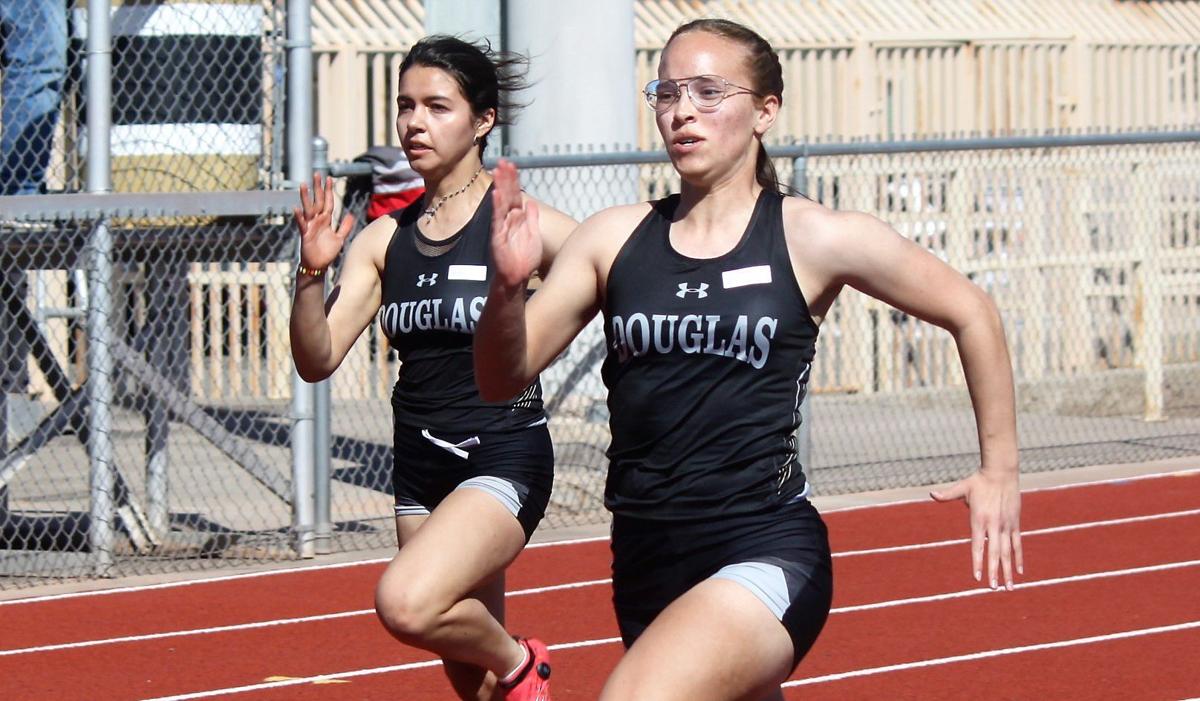 Sara Perez and Sheccid Bejarano race each other in the 100-meters Saturday. 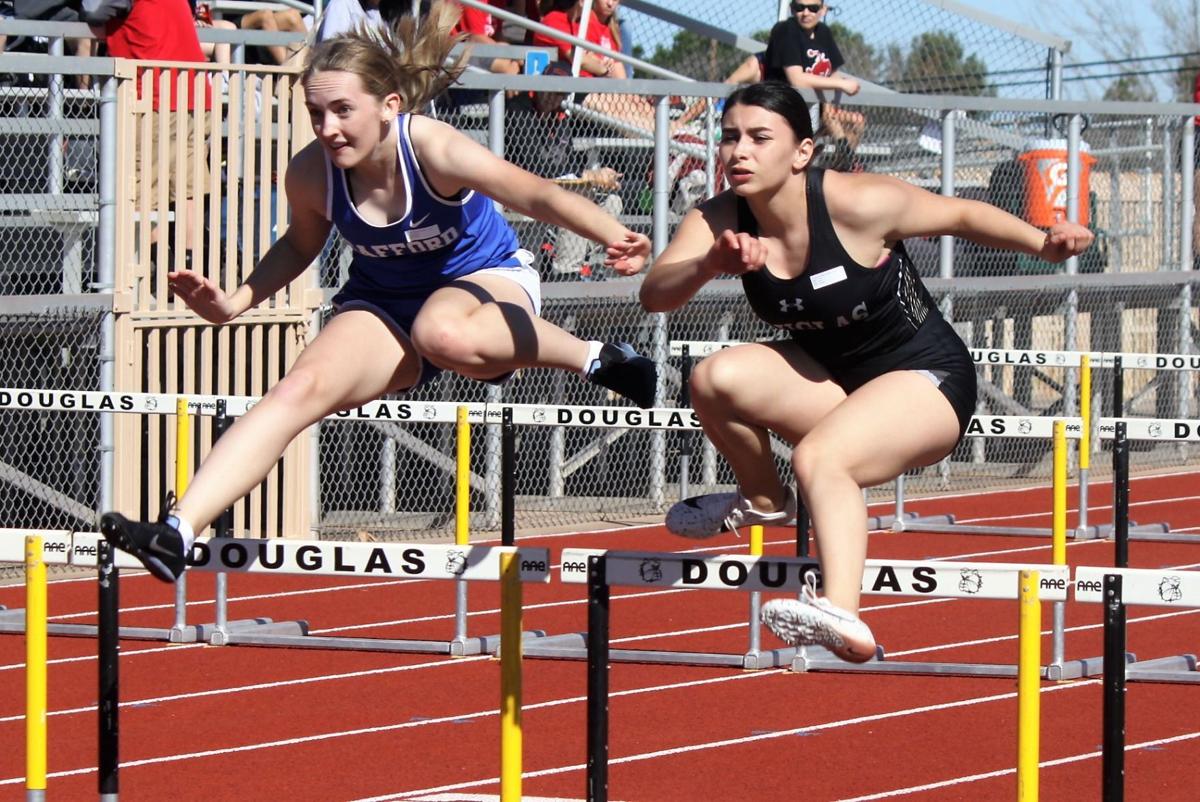 Douglas' Ashley Galaz is challenged by a Safford runner in the 100-meter hurdles Saturday. 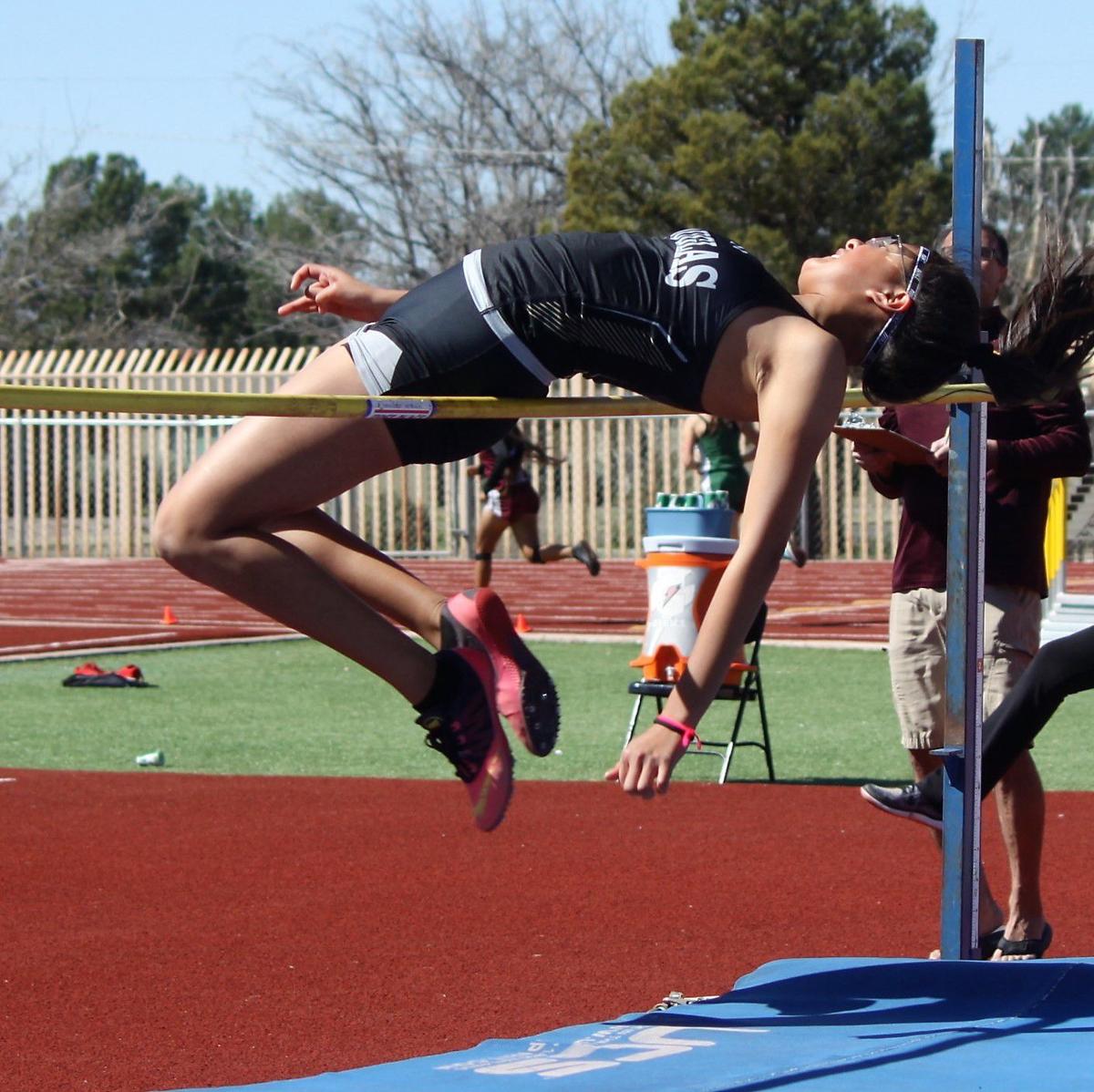 Douglas' Litzy Leyva finished third in the high jump Saturday with a jump of 4'10". 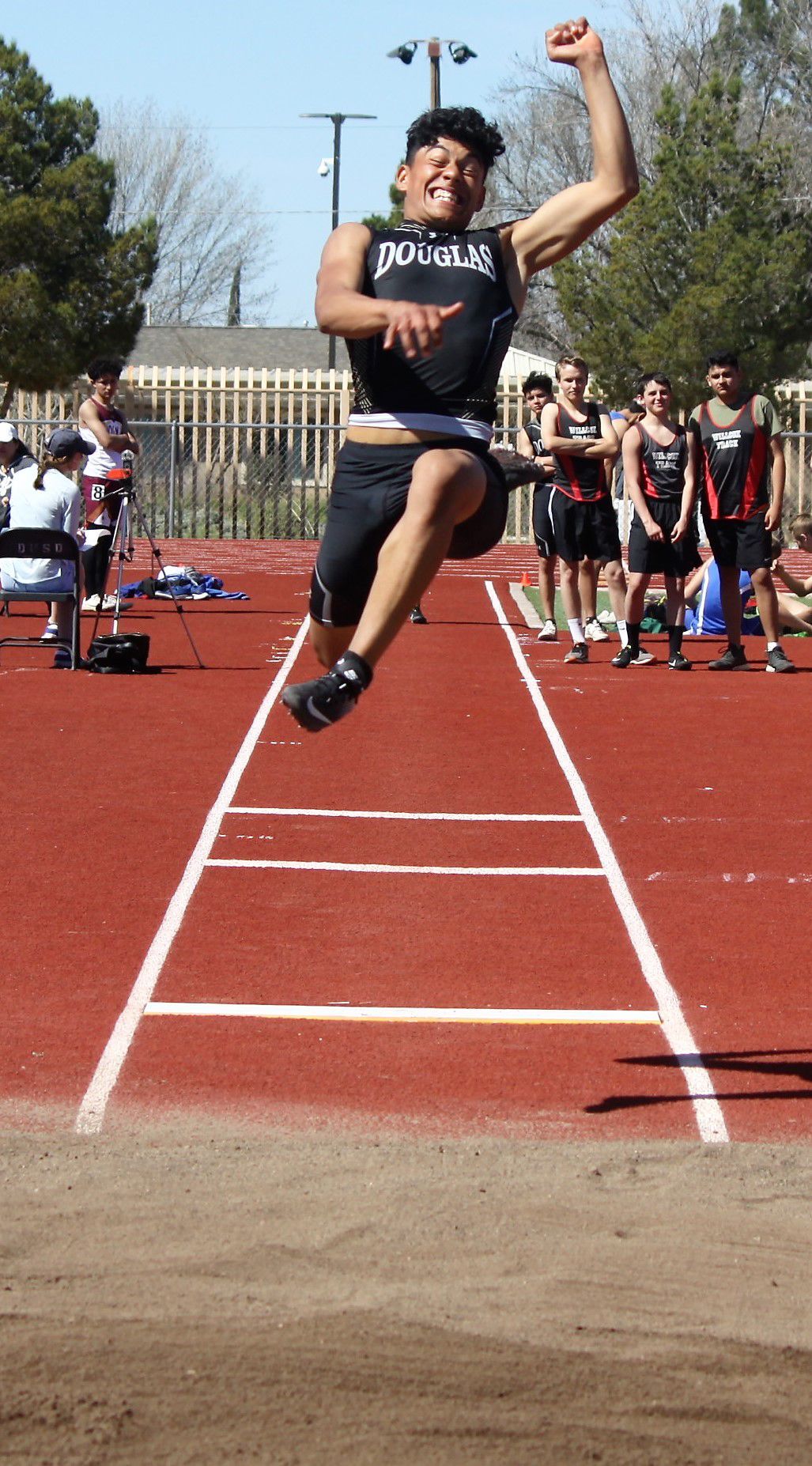 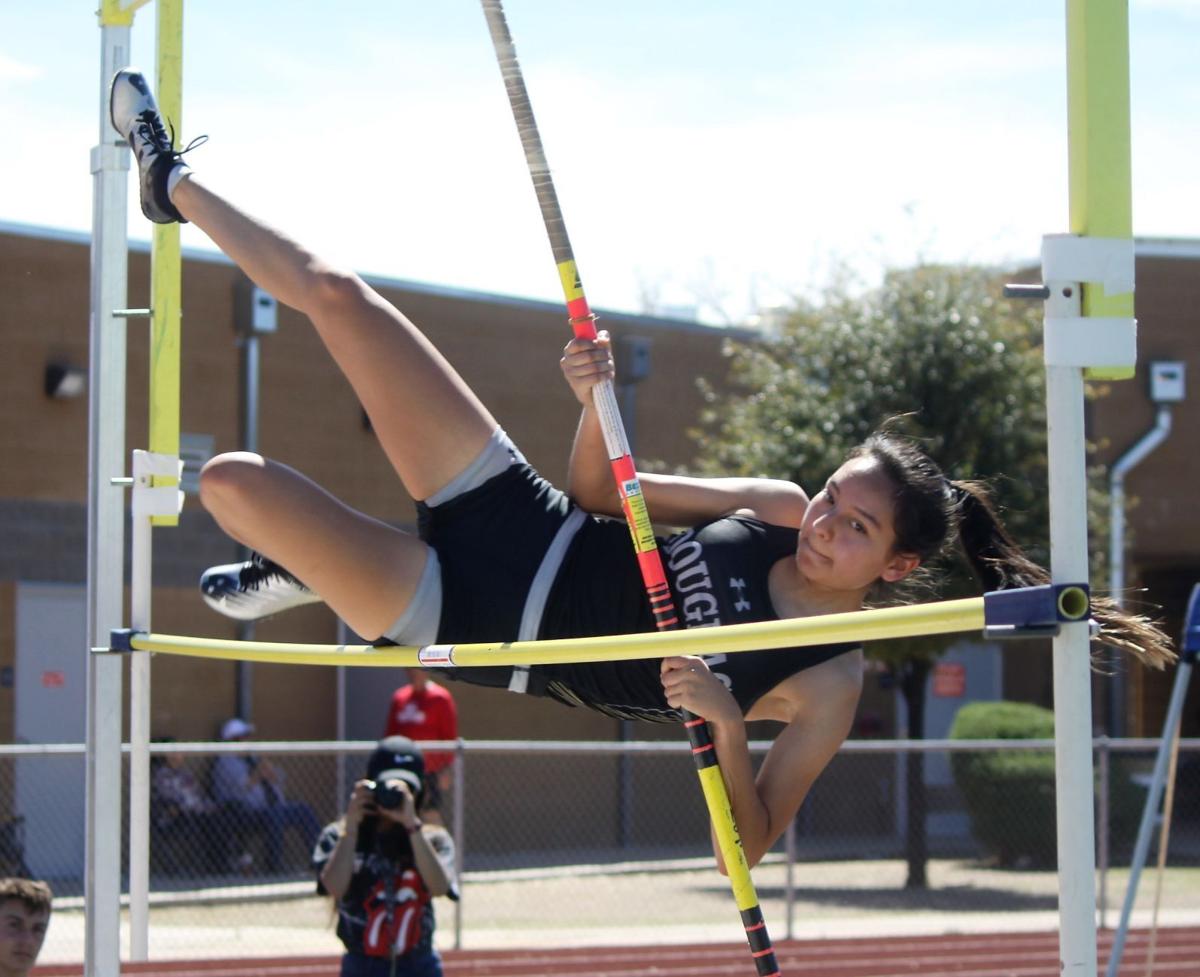 Sara Perez and Sheccid Bejarano race each other in the 100-meters Saturday.

Douglas' Ashley Galaz is challenged by a Safford runner in the 100-meter hurdles Saturday.

Douglas' Litzy Leyva finished third in the high jump Saturday with a jump of 4'10".

Eleven boys and 11 girls teams were in town for the day long meet.

Nogales High School won the girls meet with 156 points. Thatcher was second with 110, Safford was third with 100 points and Douglas had 67. Litzy Leyva, who competed for Douglas in the high jump, long jump and triple jump, was named the Outstanding Female Field Athlete at the meet. Leyva finished third in the high jump with a jump of four-feet, 10 inches. She placed second in the triple jump with a 32’4”, and she was second in the long jump with a jump of 14’ 2.75”

In the boys meet, Safford finished in first place with a score of 177. Nogales was second with a 125, Benson third with 101 points and just like the Lady Bulldogs, the Bulldogs also scored 67 points.

In the girls 100-meters, Deyanira Victor finished in second place with a time of 13.89 seconds. Sara Perez and Sheccid Bejarano also ran in the 100-meters, finishing 12th and 18th respectively, turning in times of 15.02 and 1.58 seconds.

Orosco and Galaz finished fourth and seventh respectively in the 300-meter hurdles turning in times of 54.08 and 58.32 seconds.

Sara Perez vaulted 7’6” in the pole vault finishing fourth. Bejarano placed seventh with a 6’6” and Orozco, eighth, at 5’6”.

Douglas’ 4x400 relay team of Orozco, Bejarano and the two Victor sisters came in first with a time of 4:28.

The Lady Bulldogs 4x100 relay team of Perez, Bejarano and the two Victor sisters were third with a time of 54.58.

Ochoa placed first in the 400-meters beating out 20 other runners while finishing with a time of 51.71.

Zuniga’s vault of 9’6 in the pole vault was good enough for sixth place. Precido vaulted 8’6” and placed ninth.

The Bulldogs 4x100 relay team of Zuniga, Berumen, Jaramillo and Ochoa placed third with a time of 47.14.

The 4x400 relay team of Ochoa, Berumen, Jaramillo, and Zuniga placed fifth with a time of 3:56.

After the meet Douglas’ track coach Donna Savill made a point to thank the 50 plus volunteers who worked at the invitational Saturday, helping it run smoothly.

“Overall I thought we did very well,” she said. “It’s kind of hard to see how your athletes are doing when you’re running a meet.”

Savill said her girls 4x400 relay team hit the state provisional qualifying time and to do that in the first meet is quite an accomplishment.

The coach says she has a small team but they have some high quality athletes and this is a good starting point for her squad and something they can build on.

Douglas actually hosted Cholla and Desert View in a tri-meet on Wednesday, March 4 and won that meet.

Next up is a March 25 four-way meet in Walden Grove with Desert Christian, Sahuarita, and Walden Grove.