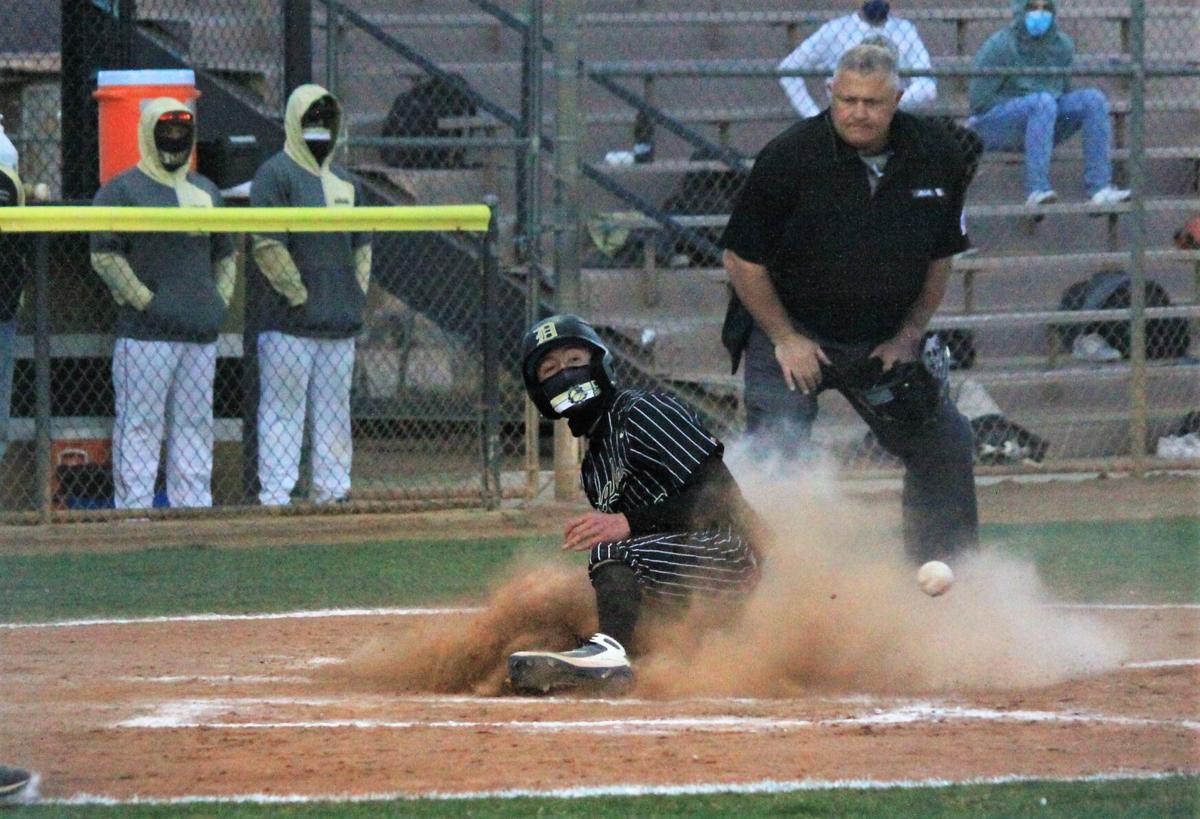 Douglas' Erian Perez beats the throw home in the fourth inning of the Bulldogs' season opener with Cholla Friday. Douglas won the game 11-1.

Douglas' Erian Perez beats the throw home in the fourth inning of the Bulldogs' season opener with Cholla Friday. Douglas won the game 11-1.

Cholla scored its only run in the top of the first inning taking a short-lived 1-0 lead.

The Bulldogs responded with four runs in the bottom half of the inning. Ochoa scored on an Aiden Rodriguez single. Later in the inning Torres doubled, scoring Rodriguez and Diego Martinez, giving the Bulldogs a 3-1.

In the second Perez and Pena scored, making it 6-1.

After scoring four runs in the bottom of the third to make the score 10-1, Perez’s run in the fourth gave the Bulldogs a 10-run lead.

Senior Daniel-Stuppi started the game on the mound for Douglas and picked up the win, pitching three innings, giving up one run and three hits while fanning five and walking one. He was relieved by Gerardo Quijada, who pitched the fourth, and Trevizu, who threw the fifth.

After the game many of the Bulldog players said it felt really good to be back on the ballfield after being forced to take over a year off due to COVID-19.

“It was so amazing to be back out here playing in front of our fans,” Alan Ochoa said. “Having our season canceled last year was heartbreaking. We didn’t want that to happen again this year and are very happy we are getting to play baseball again.”

He, like so many others, admitted that not playing last year made him develop a deeper appreciation for the game.

“I think we all have learned we can’t take anything for granted,” he said.

For interim coach Ochoa, Alan’s uncle, it was also a dream come true.

“This is so awesome,” he said. “I can’t thank Mr.(athletic director Angel) Ortega and the administration enough for this opportunity. To be able to come out here and coach these kids, coach a team that I once played for and do it with my boys, my family, coach (Gilbert) Rojas and everyone in the stands made it even more special.”

The only person not there, but watching down from above, was his dad Jesus, a former Bulldog himself who passed away in 2019.

“This stadium is something special, I can’t really describe it but there is something really special about coaching here,” he said. “This all started when I showed up one day with a glove, which was a Christmas present for my nephew Alan. Buck asked me if I wanted to help out, I said absolutely and that’s how this all started. That was five years ago. If I hadn’t come to give Alan that present I seriously doubt I would be here now.”

Looking at the game against Cholla, Ochoa credited his assistant coaches, many of whom are former Bulldogs themselves, for making sure the kids were ready both mentally and physically to play Friday.

“We have so much baseball knowledge out here,” he said. “We’ve really been hitting it hard. I was proud of the kids for the way they played tonight. It’s a good start but it’s just one game. Now we have to get ready for the next.”

Next up for Douglas, 1-0, is a road trip Thursday to Nogales for a showdown with the Apaches.

“We know their history,” the coach said. “We know we’re going to have to be ready to play.”