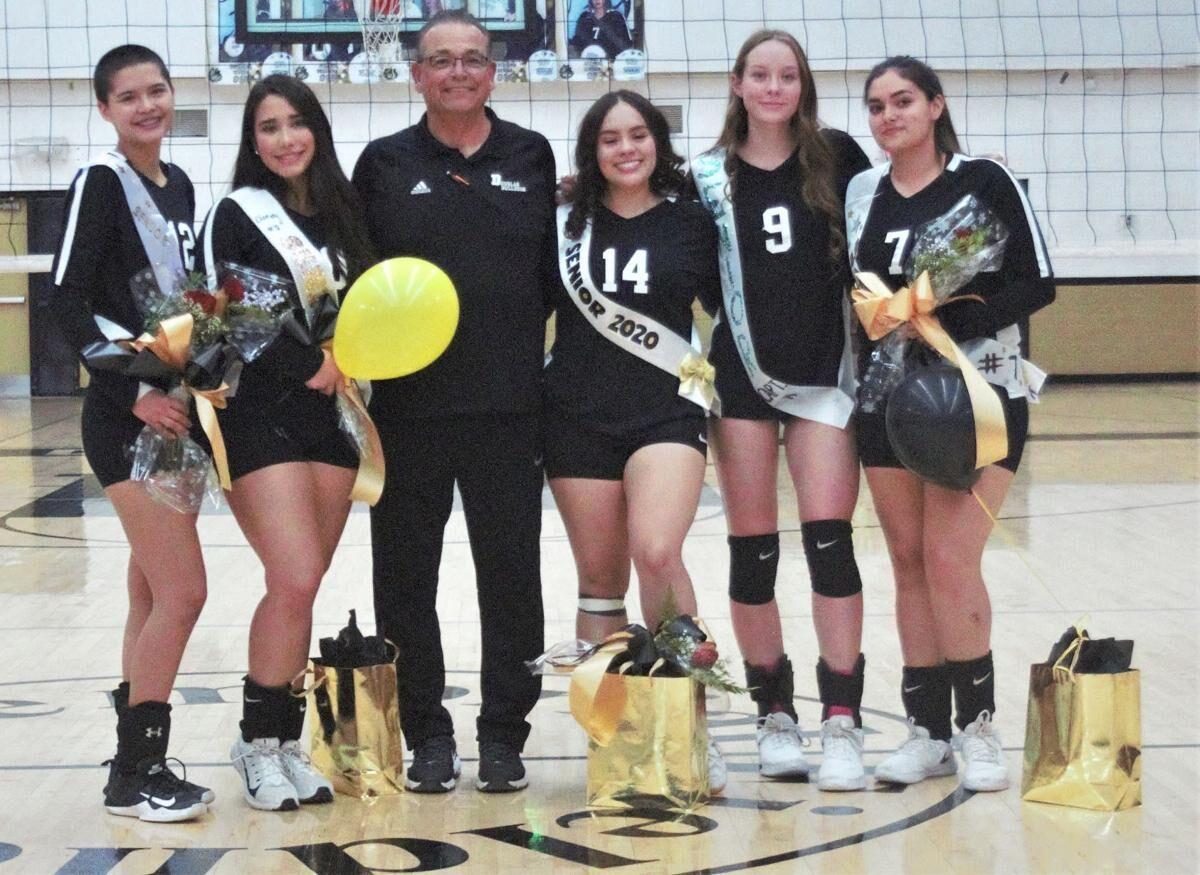 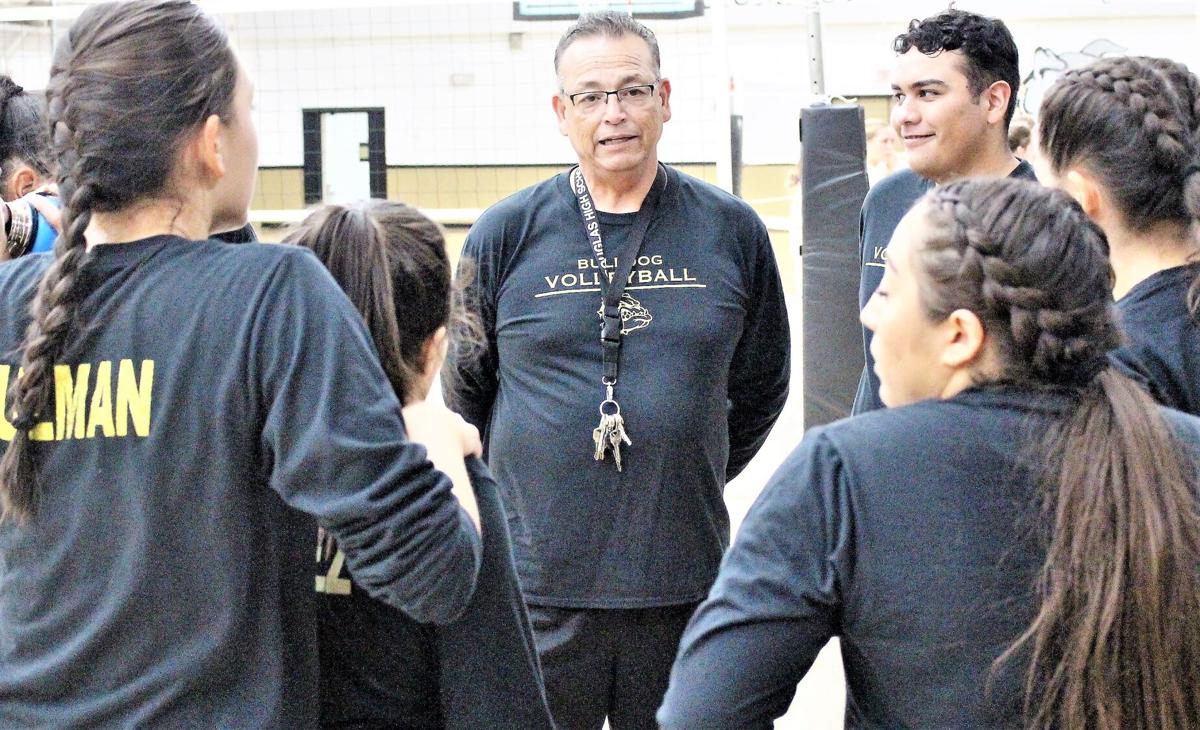 Douglas volleyball coach Carlos Chavez, shown above talking to his players in between matches, has announced he is retiring after 10 seasons.

Douglas volleyball coach Carlos Chavez, shown above talking to his players in between matches, has announced he is retiring after 10 seasons.

DOUGLAS — With the start of volleyball season just around the corner, the Douglas High School volleyball program finds itself in need of a head coach.

After 10 years as head coach of the Douglas Lady Bulldogs, Carlos Chavez has announced he’s stepping down.The outgoing coach would not elaborate as to why he was resigning other than to say it was for “personal reasons.”

Chavez states he will maintain his teaching position as a physical education and health teacher at DHS. He’s uncertain, however, if he will continue as the Lady Bulldogs assistant softball coach.

Chavez joined the volleyball program in 2009 serving as the assistant coach before replacing Lorena Tapia in 2010.

Without going into detail, Chavez said it is difficult to walk away from the program right now but it’s something he feels he has to do.

“It’s a decision I didn’t come to lightly,” he said. “I love being around the kids, around the sport. But I need to devote more time right now to my family. This is something I feel has to be done at this moment.”

Ray Borane, president of the DUSD board, stated at a recent board meeting where Chavez’s resignation was accepted it was “with regret” the board accepted Chavez’ resignation.

“I hired Mr. Chavez way back when,” Borane said “He’s been involved with DHS athletics for many years.”

Because of the COVID-19 shutdown that’s in place, the Lady Bulldogs have been unable to do any kind of summer conditioning.

“We haven’t had any kind of open gym, weight room or anything for the past five months,” Chavez said. “It’s going to be interesting to see what happens when things do start and we are able to begin.”

Looking back on his time with the program, the retiring coach said he’s leaving with some fond memories.

When Douglas ended its season Oct. 29 with a 3-0 sweep over Palo Verde on Senior Night, Chavez said seeing the fans at the match come down out of the stands and celebrate with the players who were crying, was something he will never forget.

“The atmosphere that night was awesome,” he said. “One that I will never forget. We had over 400 girls come through the program. We didn’t have many successful seasons but it was very enjoyable to see from day one to how we finished every season, how much the girls had grown and gained confidence and most importantly, learned to love the game of volleyball. They learned that hard work does pay off.”

In Chavez’s first year the Lady Bulldogs posted a 4-15 record which was followed by 7-13 and 8-17 records the next two seasons. While the Lady Bulldogs were never a “powerhouse” in their region they did prove to be a challenge at times to their opponents.

This past season the Lady Bulldogs posted their first winning season under Chavez finishing third in the Gila Region behind Amphi and league champion Walden Grove, while also narrowly missing out on the 4A state playoffs with a 10-8 overall record, a 7-4 record against conference opponents and a 6-4 record in region play. It took a six-game season-ending winning streak to accomplish that feat.

The Lady Bulldogs gave Walden Grove its lone conference loss with a thrilling 3-0 sweep in Douglas Oct. 22. The two matches against Amphi went to five sets with the Lady Bulldogs losing both 3-2.

“The last three to four years we could see the progress,” Chavez said. “It was obvious this program was improving.”

Until recently Douglas High School has had no feeder program and relied solely on open gym and summer league games to get ready for the season that laid ahead.

“Both Ray Borane and Huber Middle School have been running a volleyball league which tremendously helped us in that once the kids got to the freshman level they knew the basics and we pretty much took it from there,” he said. “I’d like to thank all my assistant coaches that I’ve had over the years, Kim Esquer, Lorena and Alonso Tapia, and Michelle Hurtado I’d like to thank Michael Chavez at Ray Borane and Gabriel Sanchez at Huber as well as the administration for allowing them to do that. It was beneficial in that we saw more wins in our program.”

The coach said Douglas volleyball often competes against players who play on club teams during the off season and for his team to have some of the successes it did against those types of players is gratifying.

Douglas’ Athletic Director Angel Ortega stated he will decide soon how to proceed with a replacement for Chavez.

“We have no further information at this time,” he said. ‘The DHS Athletics family will be forever grateful for Coach Chavez’s many years of dedication and commitment to serve our student-athletes. I know this decision was difficult, but I commend Coach Chavez for making a decision that is in his best interest and of his family. Our entire athletic program is in good footing thanks to his many years of coaching in several different programs. We will always be appreciative of his excellent leadership and compassion towards our student athletes.”