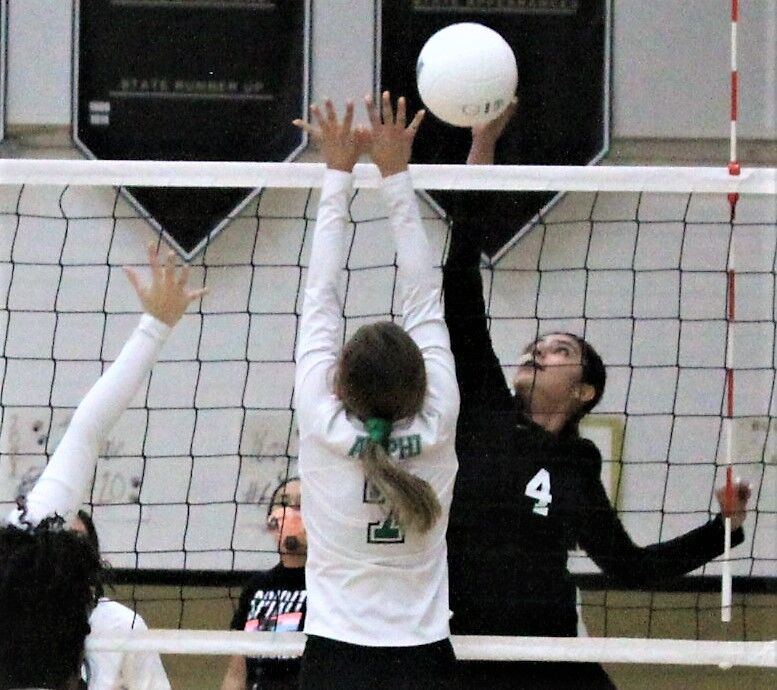 Senior Maya Munguia tips the ball over the net resulting in a point for Douglas in game one Friday. 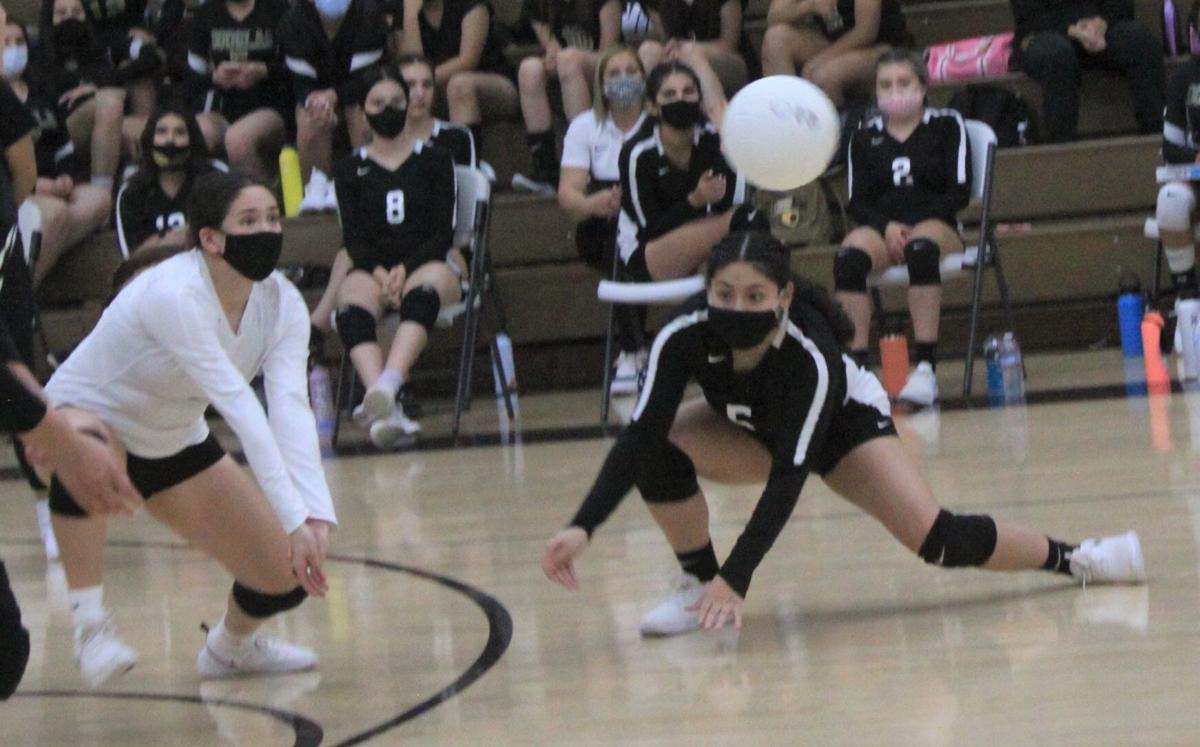 Seniors Vicky Valenzuela and Nikki Peralta dive for the ball before it touches the court resulting in a point for Amphi in the third game Friday. 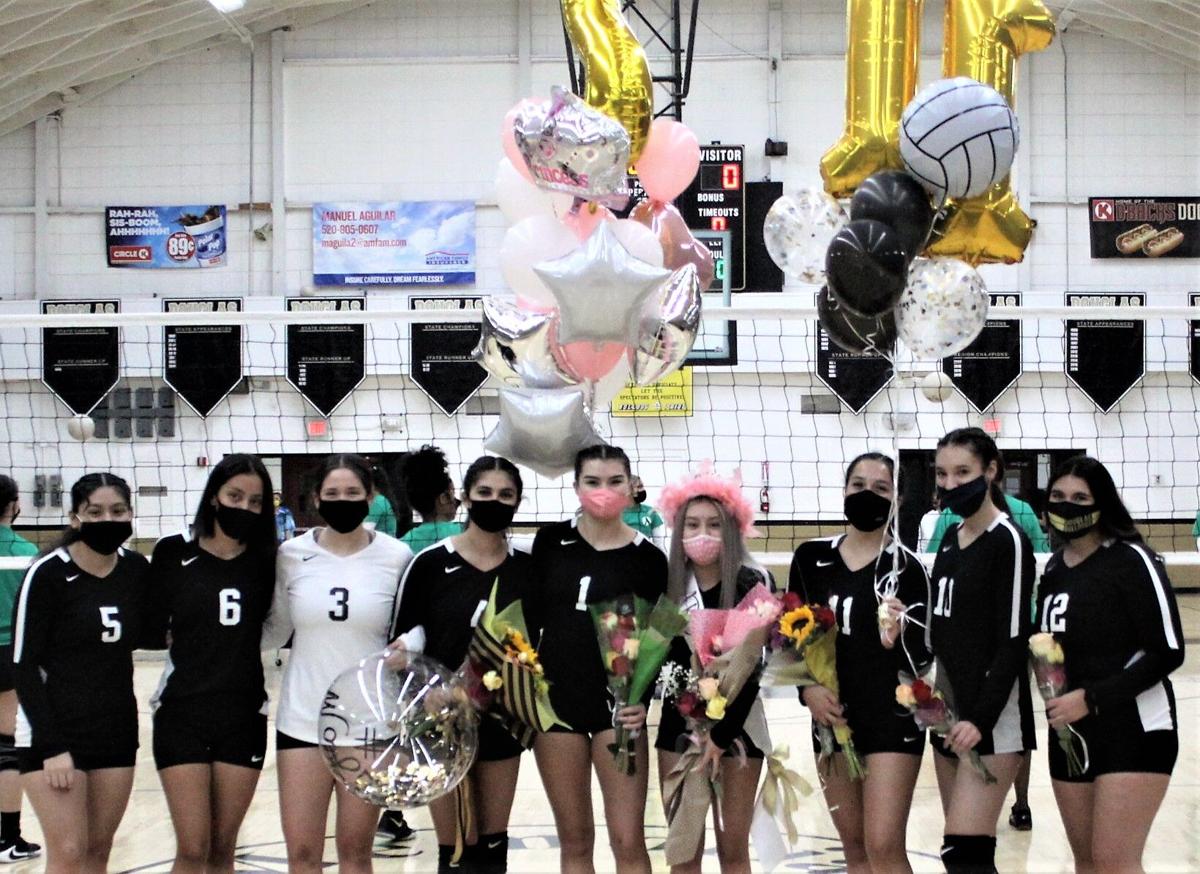 Senior Maya Munguia tips the ball over the net resulting in a point for Douglas in game one Friday.

Seniors Vicky Valenzuela and Nikki Peralta dive for the ball before it touches the court resulting in a point for Amphi in the third game Friday.

DOUGLAS — Nine seniors on the Douglas High School volleyball team were honored prior to the Bulldogs home opener with Amphi Friday in the DHS gymnasium.

Prior to the start of the varsity match seniors Isabel Tanabe, Ariana Daniel-Stuppi, Vicky Valenzuela, Maya Munguia, Nikki Peralta, Karyme Gallardo, Lexanie Perez, Andrea Maytorena and Audrey Ballesteros, as well as the four seniors from Amphi, were recognized by the Douglas coaches.

Normally senior night is held the last match of the season but this year, because of all the uncertainty with COVID-19, all DHS sports will honor their seniors at the first home game.

“With all that’s been going on I wasn’t really even expecting a home match at all this season and to be able to play tonight and be honored along with my parents, I’m grateful,” Tanabe said after the match. “This has been difficult emotionally because it is my last year. I really enjoy being on the court with all the girls, I’m just grateful that we’re playing.”

Valenzuela added that she too is grateful there is a season this year and matches are actually being played.

“For a while there we weren’t sure if there would be a season or not,” she said. “It was a little strange being recognized our first match instead of the last but I understand why they did it and I’m happy.”

Earlier in the week when Douglas faced Amphi in Tucson the Panthers pretty much dominated all three games.

Douglas put up more of a challenge in the rematch. Serve errors began the night and gave Douglas a 2-1 edge in game one.

Adriana Hernandez’s dink gave the Bulldogs a 6-2 lead early on. Amphi quickly came back and tied the match and later led 14-11 increasing that lead to 25-20 at the end of the first game.

Behind Tanabe’s serving, Douglas came back and took a 16-15 lead.

Amphi had a 7-4 lead in the third game when, again, Douglas came back. Kills by Tanabe and Hernandez and consistent serving from Gallardo gave the Bulldogs an 11-8 lead.

Amphi came and the two teams traded points for the next several serves. Tied at 13, Amphi took the lead for good, closing out the game with a 12-2 run.

As a team the Bulldogs would close out the night with 15 kills, 21 digs, 11 assists and eight aces.

Douglas’ new head coach Ashley Ellis said after Friday’s match it feels good being back on the court again. She admits however it was rough opening up against two quality opponents in Amphi and Empire.

“We did face a couple of great programs this week,” she said. “I feel this gives us an idea of where we’re at. We’re looking forward to this coming week when we face Walden Grove Tuesday on the road and Sahuarita Thursday at home.”

Ellis said she was extremely happy her girls had at least one home match this season and that her seniors were able to be recognized.

“The restrictions on the spectators was kind of a downer,” she said. “With that being said, I feel we had a good turnout tonight. There was good energy in the gym and the girls reflected that as well.”

On Thursday the Bulldogs were at Empire where they were defeated 3-1.

Maytorena had 19 assists and an ace; Munguia, two kills; Gallardo, one kill; Tanabe, seven kills, two aces, a block and an assist.