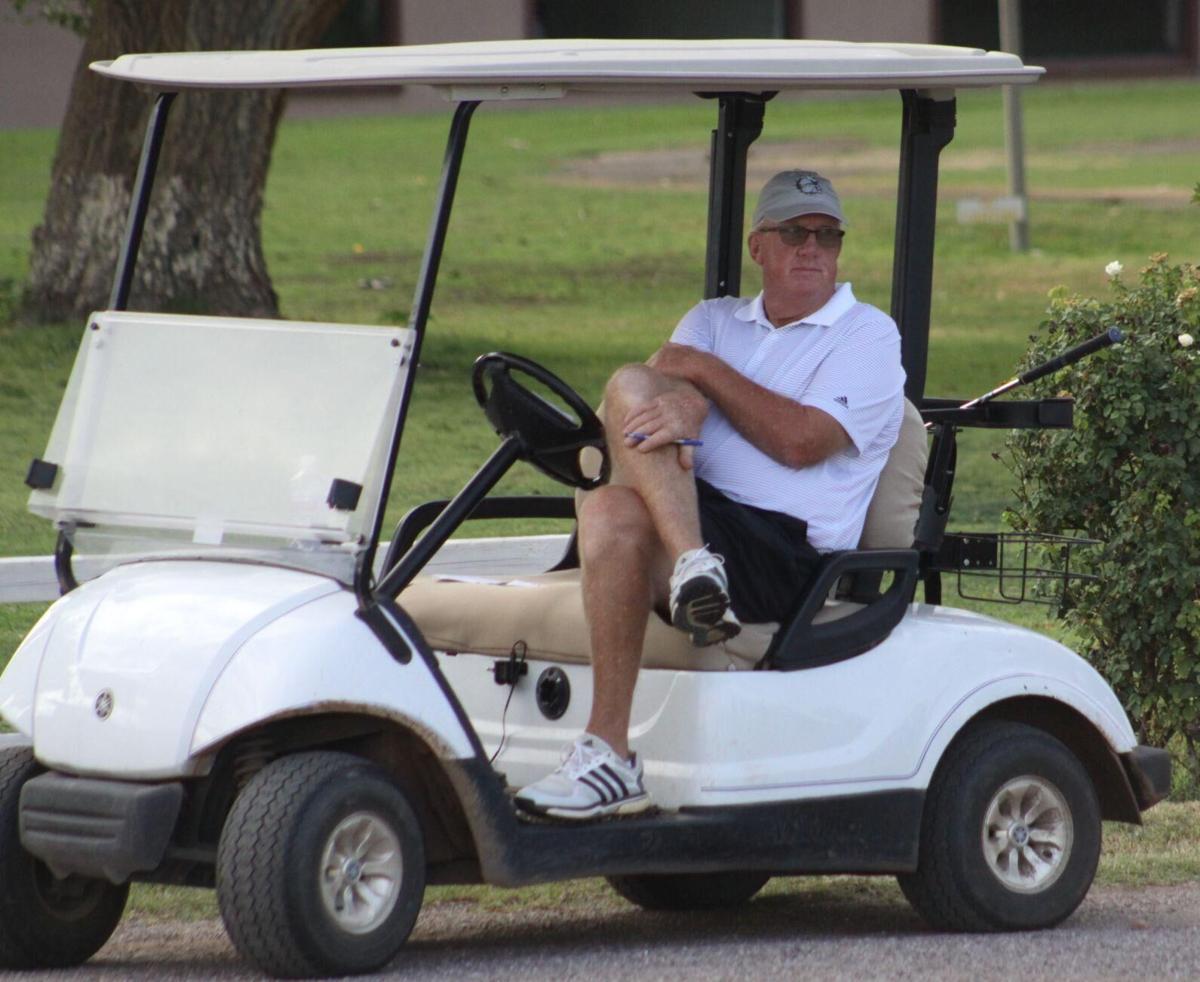 After 40 years of coaching sports at Douglas High School, 31 of which with the golf team, Bosco Selchow is retiring. 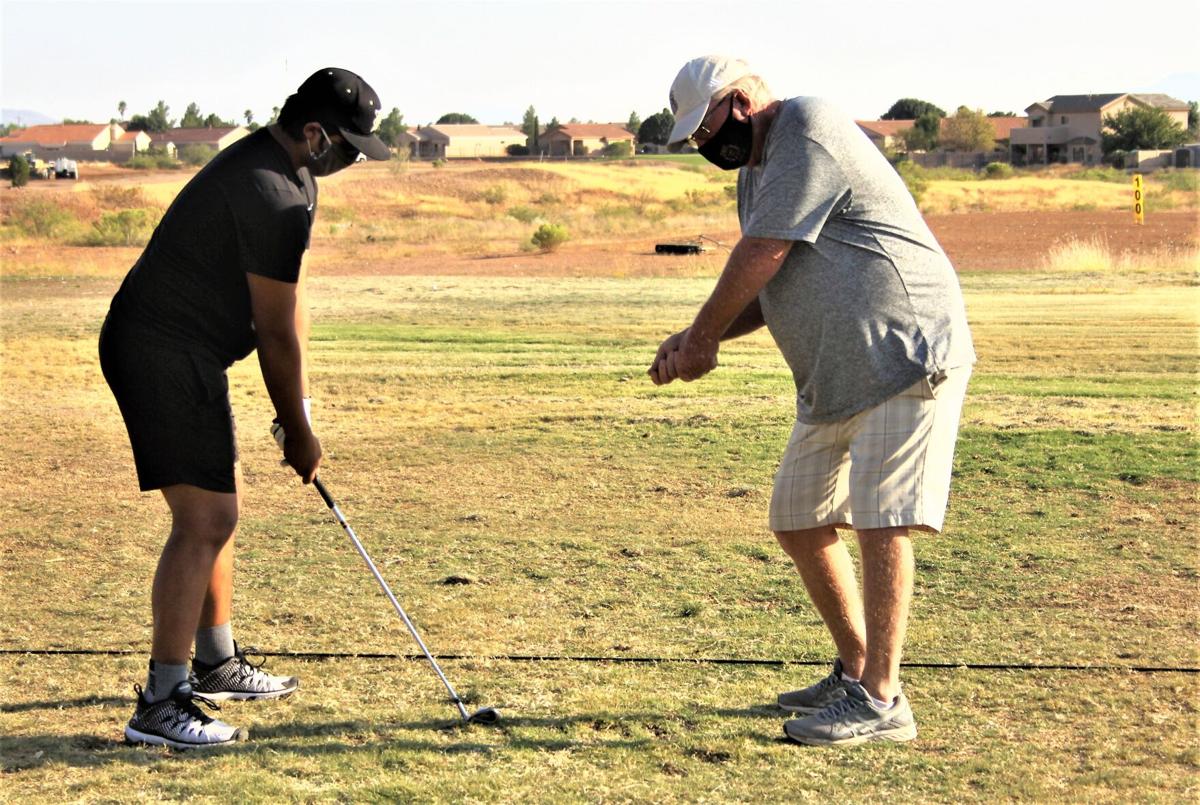 Douglas golf coach Bosco Selchow works with Aiden Rodriguez on his form at a practice earlier this year at the Douglas Golf Course.

After 40 years of coaching sports at Douglas High School, 31 of which with the golf team, Bosco Selchow is retiring.

Douglas golf coach Bosco Selchow works with Aiden Rodriguez on his form at a practice earlier this year at the Douglas Golf Course.

DOUGLAS — After 40 years of coaching, James “‘Bosco” Selchow is retiring.

Since being hired in 1980 by then superintendent and now current DUSD board president Ray Borane, Selchow has coached football at both the junior high and high school levels for 10 years; was an assistant freshman and junior varsity baseball coach to both Mike Foster and Jaime Tadeo for 16 years; and for the past 31 years has been the head coach of the Douglas High School golf team.

After graduating from DHS in 1975, Selchow attended Cochise College on a baseball scholarship. After Cochise, he played baseball for Ouachita Baptist University, a private, Baptist liberal arts college in Arkadelphia, Arkansas, and graduated with a degree in education. Shortly after graduation Selchow accepted a teaching position in Show Low and was getting ready to leave Douglas when he received a call from Borane asking him if wanted a job as a geography teacher at Paul Huber Middle School. He accepted the position and began coaching the Wolfpack football team with Ron Ellsworth and Manny Ramirez his first year.

“When I hired Bosco it was kind of a milestone,” Borane said. “When I was coaching myself, I remember he and David Sharp were just little guys and they were constantly running around the football field and the gym all the time. He would ride on the buses with us and was always in the press box or the coaches office. When I hired him it was gratifying because I knew him ever since he was a little boy. He comes from a very reputable family. I was very close to his mother and father, Harry. I also taught all his sisters when they were in school. To see how successful he has been in his career not only coaching but also teaching, is really gratifying.”

Borane has always been big on “home grown teachers.” He said Selchow is a perfect example of someone that grew up in Douglas, went off to college and then came back and gave back to a community he grew up in.

“As a board we wish Bosco nothing but the best,” he said. “His retirement is well deserved. His 40 years of coaching makes him a legend as far as I’m concerned. I believe he is the longest standing coach in the history of Douglas. I’m glad I was still around to see him reach this milestone. It’s bittersweet. I’m happy for Bosco and his retirement but we are losing a darn good coach.”

Selchow said because of his dad, he has been around golf and playing since he was about 12 years old. He remembers going to the golf course where the two would hit balls together. Selchow says he finds the sport mentally and physically challenging. He says he never played golf in high school because then golf was played in the spring during baseball season. He continued to play on the recreational side and when the golf coach position opened up in 1989 he decided to put in for the position and was hired.

“When I first enrolled at Cochise I was going to follow my dad’s footsteps and go into law enforcement,” Selchow said. “But I was playing baseball and really wanted to coach. When I went to Arkansas I switched majors and went into educating, knowing it would allow me to coach.”

Selchow said he has had some dedicated assistant coaches over the years: Don Riley, Marty Valenzuela and the latest, Joe Salcido, all of whom were volunteer assistants.

“He was an excellent teacher, an excellent coach; had a lot of patience with the kids,” Salcido said when asked what it was like to coach with Selchow. “I really enjoyed being his assistant these past five years. We had some good times.”

Selchow coached all four of Valenzuela’s sons and recalls having some respectable teams those years.

His best team year was 2007 when the Bulldogs finished fourth in the state. His best individual golfer performer at state is Osvaldo Machado, who placed second in the state tournament one year.

“In the early ‘90s I had some really good teams,” the coach said. “We did well for a really long time. We won our region five or six times.”

By Bosco’s side supporting him the entire time is his wife, Jana, who is a retired educator. The couple will be celebrating their 40th anniversary this January. Selchow states he was fortunate to have been able to coach his son Jordan while his daughter, Meghan, was a cheerleader.

He said it was because of his family that he made the switch from football and baseball to golf.

“My kids were young at the time and football requires a lot of time,” Selchow said. “I found myself being away from home a lot and wanted to be home more, around my family. Coaching golf allowed me to do that. I’ve never regretted that decision. I can honestly say I’ve had fun coaching golf these past 31 years.”

When talking about his wife and her support over the years, the coach gets a little emotional.

“She’s always been there,” he said. “Being a coach’s wife is not easy. She raised our kids when I wasn’t around. It takes a special kind of person to do that. Without her support I would not have been able to coach all these years.”

Bosco admits that on more than one occasion he wthought about stepping down but then some golfers who displayed signs of potential would come along and those thoughts would be put on hold for another season.

He said this year was different however.

“Going into this season, even before COVID, I knew this was going to be my final season,” Selchow said. “I felt it was time.”

Now that he has retired from coaching Selchow plans on continuing on playing golf and admits he may attend a high school golf match or two in the coming years. He is going to be spending a lot more time with his son and daughter-in-law and their baby in addition to visiting his daughter in Illinois.

“For the past 40-plus years I’ve coached something,” he said. “It’s like they say when you’re having fun, time goes fast and I truly believe that. It really went by fast. I’m sure I’ll miss it, especially come August, but it’s time.”