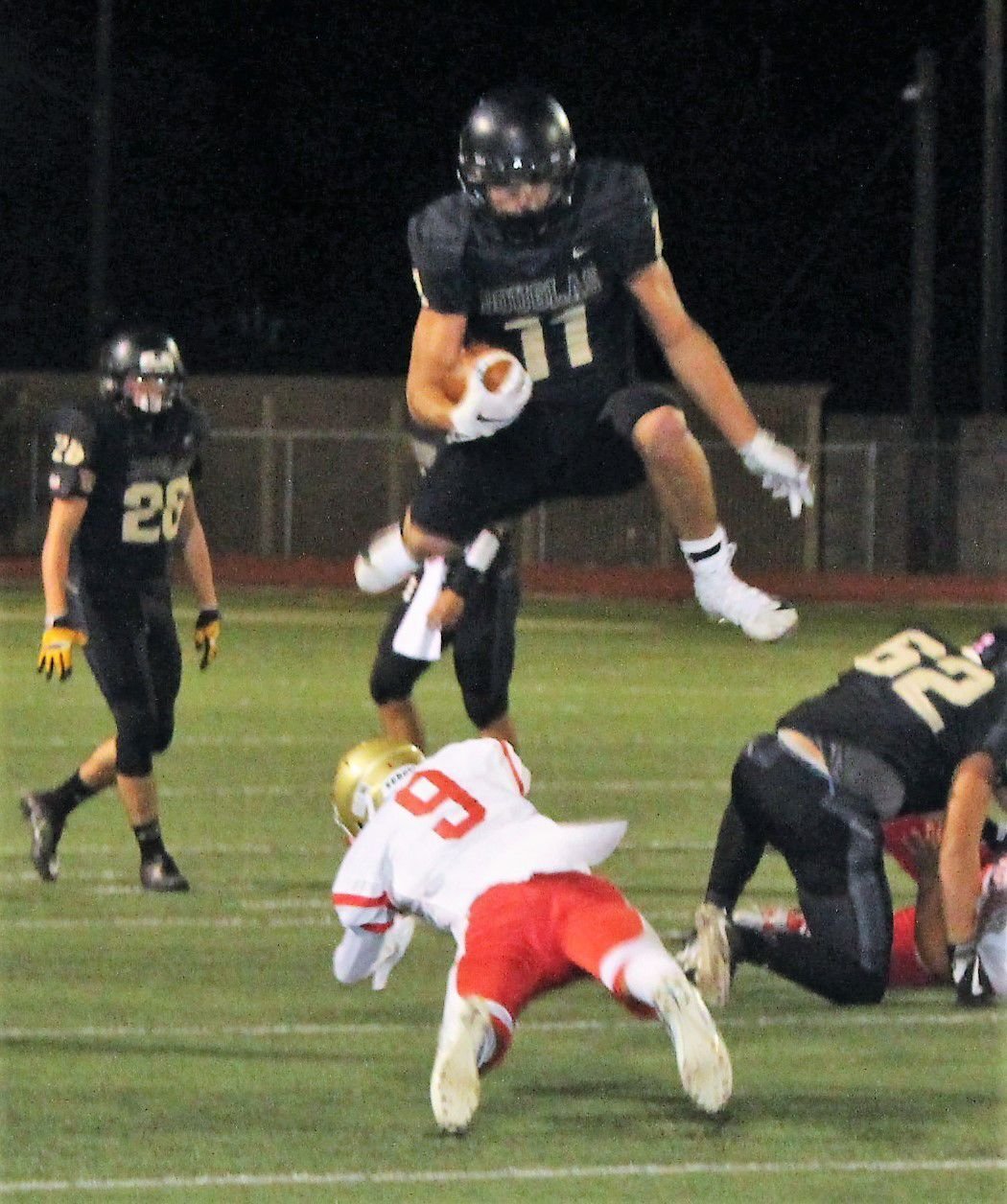 Former Douglas Bulldog Christian Estrella shown above hurdling a Rio Rico player in 2018, will be playing football for the Papago Pumas this fall. 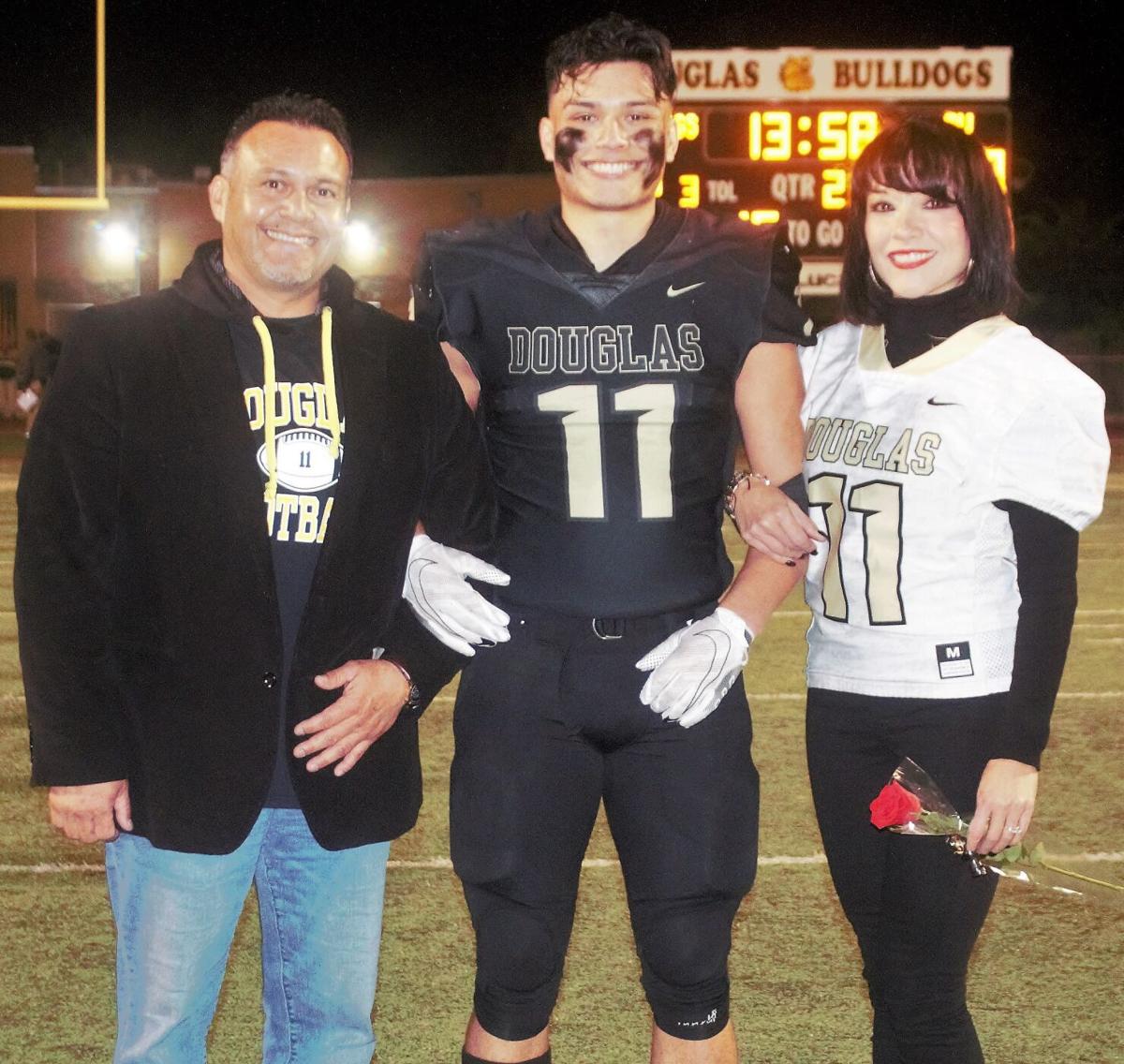 Christian Estrella, shown above with his dad Elzy Estrella and his mom Celena Galaz, on Senior Night at Douglas High School last October.

Former Douglas Bulldog Christian Estrella shown above hurdling a Rio Rico player in 2018, will be playing football for the Papago Pumas this fall.

Christian Estrella, shown above with his dad Elzy Estrella and his mom Celena Galaz, on Senior Night at Douglas High School last October.

DOUGLAS — Ever since he can remember, Christian Estrella has dreamed of playing collegiate football.

Earlier this week, Estrella departed for Tempe where he is enrolled in online classes at Mesa Community College and will study nutritional science and lifetime fitness. He will also play football for the Papago Pumas, one of five teams in the Hohokum Junior College Athletic Conference (HJCAC).

The HJCAC was created two years ago after the Arizona Community College Athletic Conference dissolved its football program leaving many JUCO football players in the state without a place to play.

According to their website, “The HJCAC does not exist solely to offer an opportunity to play football, rather it was created to ensure access to education in a competitive environment for football student-athletes throughout the State. By approving of degree programs offered across many HJCAC approved community colleges, students are afforded the opportunity to gain expansive academic opportunities while our coaches work to secure their future academic/playing opportunities at the university level. Our approved list of partner community colleges is able to provide the highest caliber Associates Degrees, transferable credits and a student-centric learning platform while the HJCAC is able to provide elite level coaching, life skills and an extensive recruiting network. We are here to help facilitate collegiate opportunities for the students that each of us serve.”

The Pumas were 3-5 last year and have a new coach this year. Brandon Payne stated his team will play eight games over 10 weeks this season; the first game scheduled for Oct. 17. All of the Pumas home games will be played at Mesa High School.

“When I saw (Christian) on film I saw an aggressive kid that moves well,” Payne said. “I liked that he was used at multiple positions. He can pretty much play anywhere on the field. He displays great instincts and is a smart player. I saw his leadership qualities as well which was a plus. I believe he can do great things for our defense.”

Payne says he plans on using Christian as an outside linebacker.

“It’s obvious from what we saw of him on film that he likes to hit people,” the coach said. “He has great size, great height for the position we want to use him at. We see him as the kind of player that will go out and make some big plays for us on defense. He’s a very physical type of player who is definitely not afraid of contact.”

Estrella scored 23 touchdowns for the Bulldogs his sophomore, junior and senior years both as a running back and a receiver. He was also a three-time All Gila Region first or second team honoree all three years. Christian says he doesn’t mind going the JUCO route if it means a shot of fulfilling his dream of playing major college football.

Christian’s mother Celena Galaz, stated her son’s new coaches have pretty much guaranteed him a DI or DII placement.

“Their placement is about 90-95 percent,” she said. Estrella is reportedly getting some interest from some of Arizona’s major universities.

Looking back on his high school career, Estrella said it was frustrating at times because he feels he, as well as other members of the team, weren’t allowed to play up to their full potential.

“I feel like we had a lot more potential than what we were allowed to show,” he said. “All the coaches coming and going never really gave us a chance to settle and push off our back foot. We were basically leaning and fumbling. If anything it was a blessing in disguise because it makes me feel a little more humble. I’m going to a bigger city, bigger program but I’m always going to remember where I’m from and who I am.”

Estrella describes his senior season as “heartbreaking”; the hardest part not being able to play in the Bisbee game his senior year.

“Coming off my junior year, I had a lot of high expectations for myself and I’m really hard on myself” he said. “Going through a season like we did, defeated any confidence I had in myself. I’m always going to remember my time at DHS but at the same time look past it and build on to that.”

Galaz admits it was tough watching Christian, her youngest of three children, go through all that he did while playing for the Bulldogs.

“I put my mom hat on and allowed my son to grow into the man he is,” she said. “I knew he had so much potential and could have done so much more to help the team. Not being able to play in The Pick game was the biggest downfall, especially considering that it was his senior year. Christian is a versatile player that can play many positions. If you want a winning season you have to put players where you know they’re going to win games.”

James Fitzgerald, who coached Estrella his sophomore and junior seasons, said he was one of the first players he met after being hired.

“As soon as I saw him I thought to myself ‘this guy is a football player.’ I need to figure out a way to use him any way I can both offensively and defensively,” he said. “His intensity level was really high, he had a true passion for the game and a willingness to get better and a desire to win. He was one of my more dynamic players the two years I was there. I always knew Christian had the ability to play at the next level. It was just a matter of finding a team willing to give him a chance.”

Fitzgerald is back in Arizona working as an assistant coach as well as the strength and fitness coach at his alma mater, Valley Christian High School in Phoenix. He says he is looking forward to going to some of the Puma games and watching Estrella play this season.

The Pumas first practice is not until Sept. 21. Between now and then the players will be conditioning, learning the plays and having zoom meetings.

Payne admitted he too is anxious to start practicing with his new team.

“I have high hopes for that kid, I believe in Christian and I believe he will be a successful student athlete,” the coach said. “The league itself is going to have a COVID protocol for all players. The most important thing for us is to keep these players healthy and safe.”