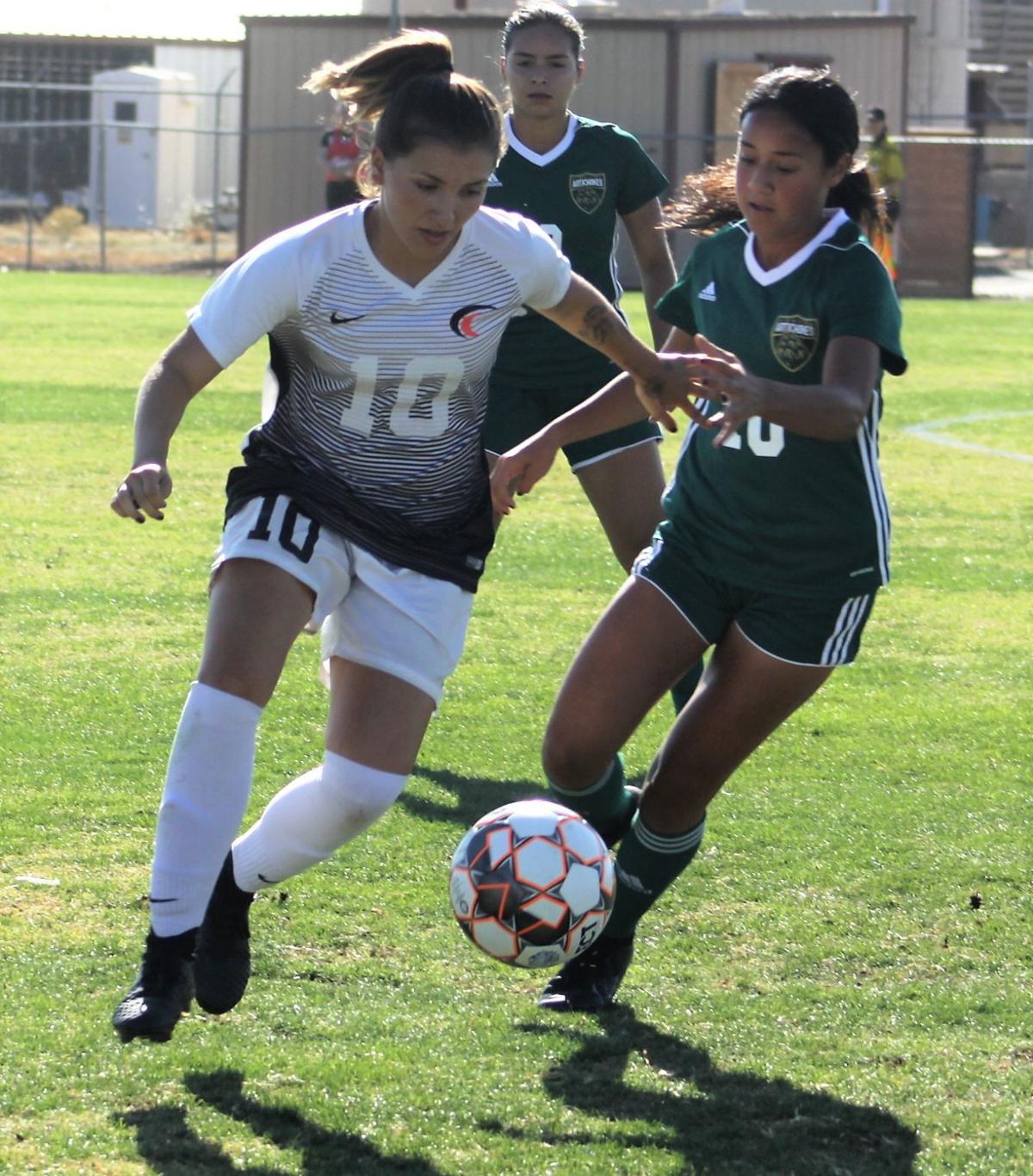 Maria Azarias, from Catarina, Brazil, has been selected the Region 1 Player of the Year. 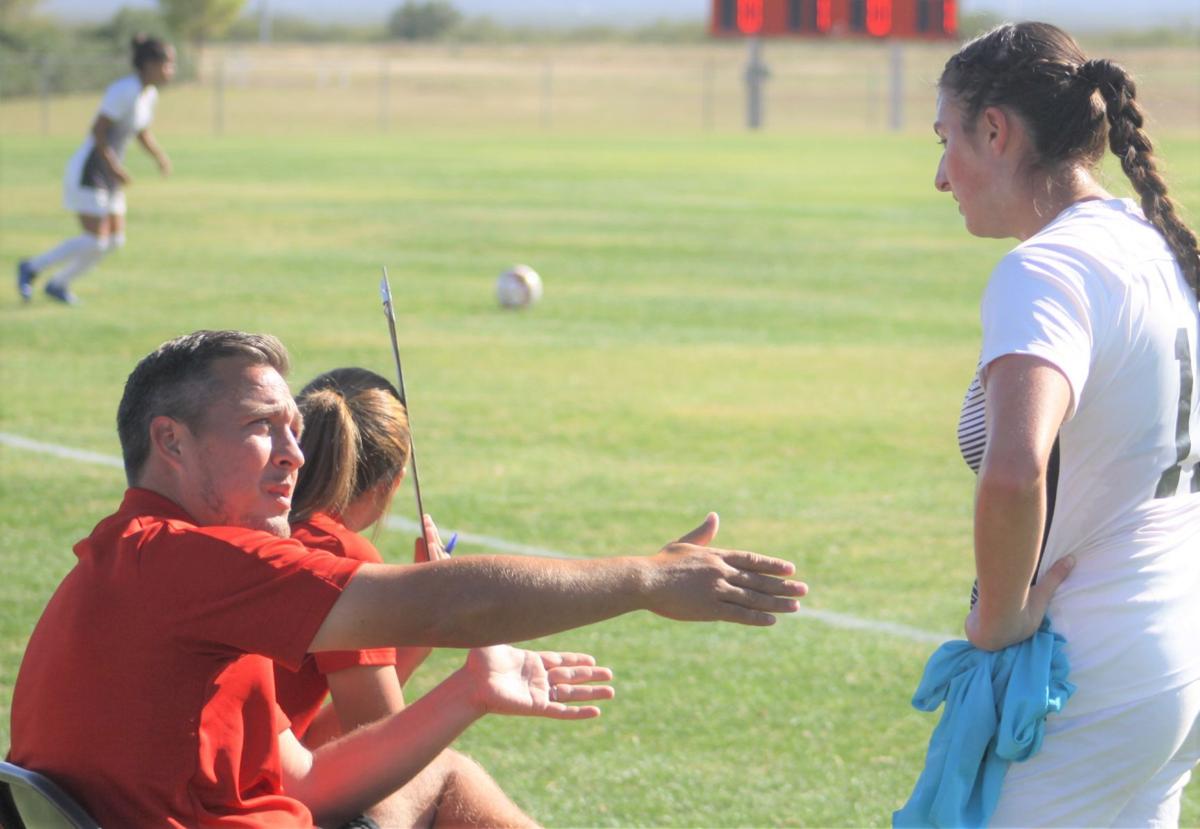 First year coach Bobby Peters, shown above talking to Kiara Villaescusa, has been named the Region 1 Coach of the Year. 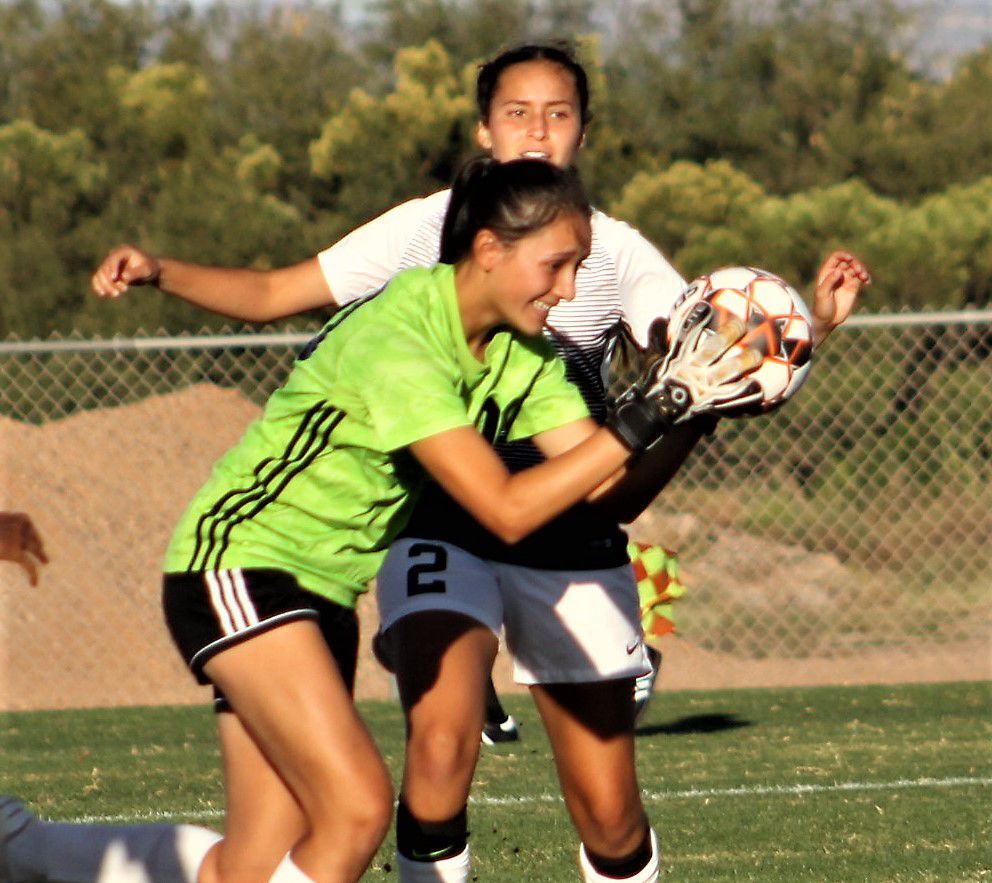 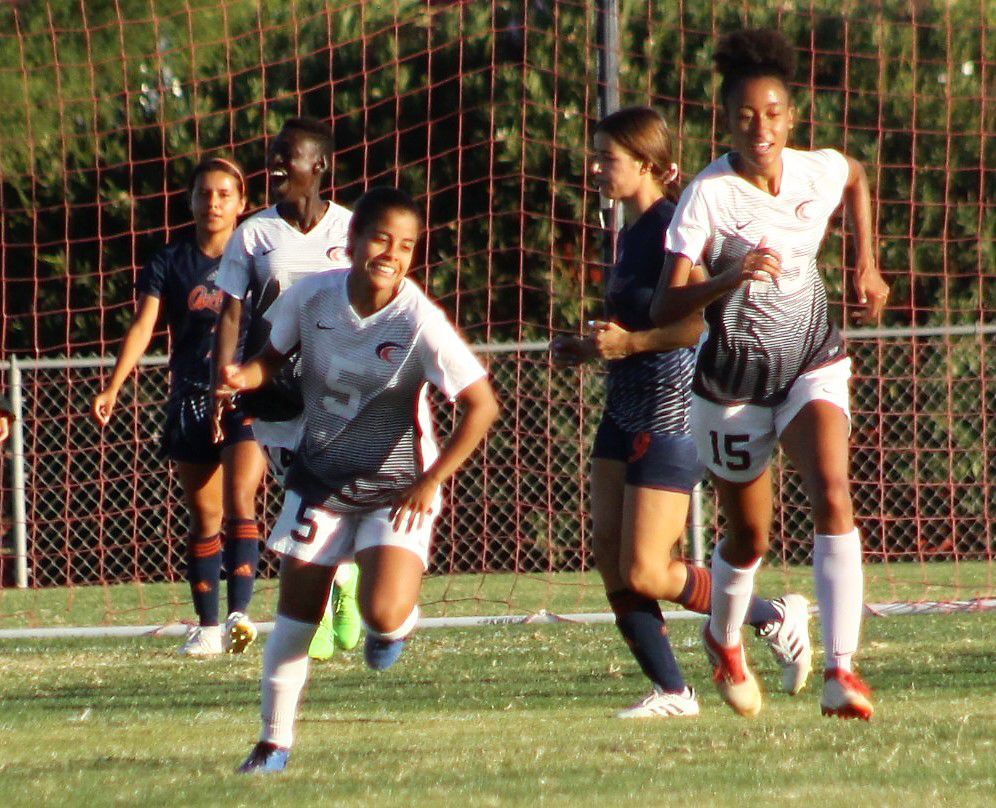 Maria Azarias, from Catarina, Brazil, has been selected the Region 1 Player of the Year.

First year coach Bobby Peters, shown above talking to Kiara Villaescusa, has been named the Region 1 Coach of the Year.

For only the second time since the 1998 inception of women’s soccer at Cochise College, the Lady Apaches will host a Region 1 playoff game.

Cochise College, champions of the Arizona Community College Athletic Conference (ACCAC), will host the winner of Tuesday’s regional playoff match between Arizona Western and Pima College Thursday, Halloween Day, at 2 p.m. at the Cochise College Douglas Campus. Fans attending the match need to be aware that because this is a playoff match, an admission fee of $3 for students; $5 for adults will be charged.

Should Cochise win Thursday, it will host the Region 1 finals Saturday at a time yet to be determined.

In just a few short months Peters has turned around a program that hadn’t made the playoffs since 2013 and has never been ACCAC champions let alone region champions.

“It’s been amazing,” the coach said when asked what’s it been like to watch this team grow, mature and develop into a conference championship team this season. “We set a path to follow for the season early on. These girls bought in and have worked tirelessly for their chance of success. We have players playing a brand new system, and they’ve embraced it. Also, the players have learned multiple positions so we can make adjustments every game. The willingness to work hard and adapt has been fantastic.”

The coach said he believes the turning point in the season came through losses, as weird as that might seem.

“In the first seven games, including preseason, we had a lot of injuries,” he said. “We had to make changes to the way we played, and put players in positions they were unfamiliar with. When we came into Phoenix, Paradise Valley, Chandler, then Mesa the first time, we had multiple starters out. If you look at the score line though, you can see they were close games. Our players realized at that point as a team we can compete with anyone, regardless of who is on the field.”

“Every team in the ACCAC is tough,” he said “This team has been able to buy in to our game plans and work tirelessly to execute. It hasn’t been the pretty plays that have led to success, it has been our determination and grit when we face adversity. To be able to win the conference championship has surprised me. It didn’t surprise me once we were in the conference schedule itself, specifically when we had our first couple results. The games against Chandler, PV, and Phoenix showed me we had a good shot at it.”

The coach said Guzman and Azarias have been the biggest surprises this season.

“(Azarias) has the ability to raise the team to another level when she is at the top of her game. It’s not to say the team can’t win without her, I’ve seen players all over our squad step up in big situations. Bri has instilled confidence in the players who play in front of her. They know in a big game Bri steps it up a level. It’s very exciting to see.”

Cochise last hosted a regional semi-final game in 2005 when Kenny Dale was the coach. Cochise lost that game and was not able to advance.

“That is where we will be on Thursday” he said. “We will have matched the furthest a team has been. My goal is to move past it, and if the girls are playing their best, we have a good chance. Honestly, I’m very excited the team earned another chance to come out and compete. This is always the most fun, and intense time of the season. Playing in playoffs help players achieve another level of play. I’m very excited to see who will step up for us.”

“The loss was very disappointing, in a few aspects,” the coach said. “First of all, we picked up a few injuries that we could do without. I ended up resting multiple players in the second half. We played with only one sub for a big portion of it. We should be able to push through the injuries we have all season though. Second, we didn’t play our game. We missed a lot of our team identity through the match. We fought hard, but without purpose. To get back, we will have to focus on our set pieces and our accountability when defending. They were really simple mistakes to fix, but they were big mistakes. We will make some adjustments and focus on improving a few areas of our play.”

Looking back on his first year, coach Peters says he’s glad he accepted the coaching position at Cochise,

“There is a lot of positive support the school gives to our teams” he said. “When you look at the people who give to our programs, from JD (Rottweiler), Bo (Hall), the athletics department, teams, administrators, and students we have a strong foundation. We’ve also seen an uptick in support from our local communities, which is a blessing. I’ve seen players from Douglas, Bisbee, Benson, Tombstone, and Sierra Vista who have been excited about the possibility of playing here in the future. We have also seen an uptick in the Tucson area as well. I’d like to give a lot of credit as well to my assistant coach Jennifer Moore, for being a great role model to the girls. She usually helps the girls understand their workouts and makes the players accountable. I think she has done an amazing job with helping me build a team culture here. We really have focused hard on bringing the right mentality to the game. I’ve been able to give her tasks to focus on in practice for the game, and we can split off to train different groups while never missing a beat. It is very nice to have someone equally invested in the team, to bounce ideas off of and trade thoughts with.”