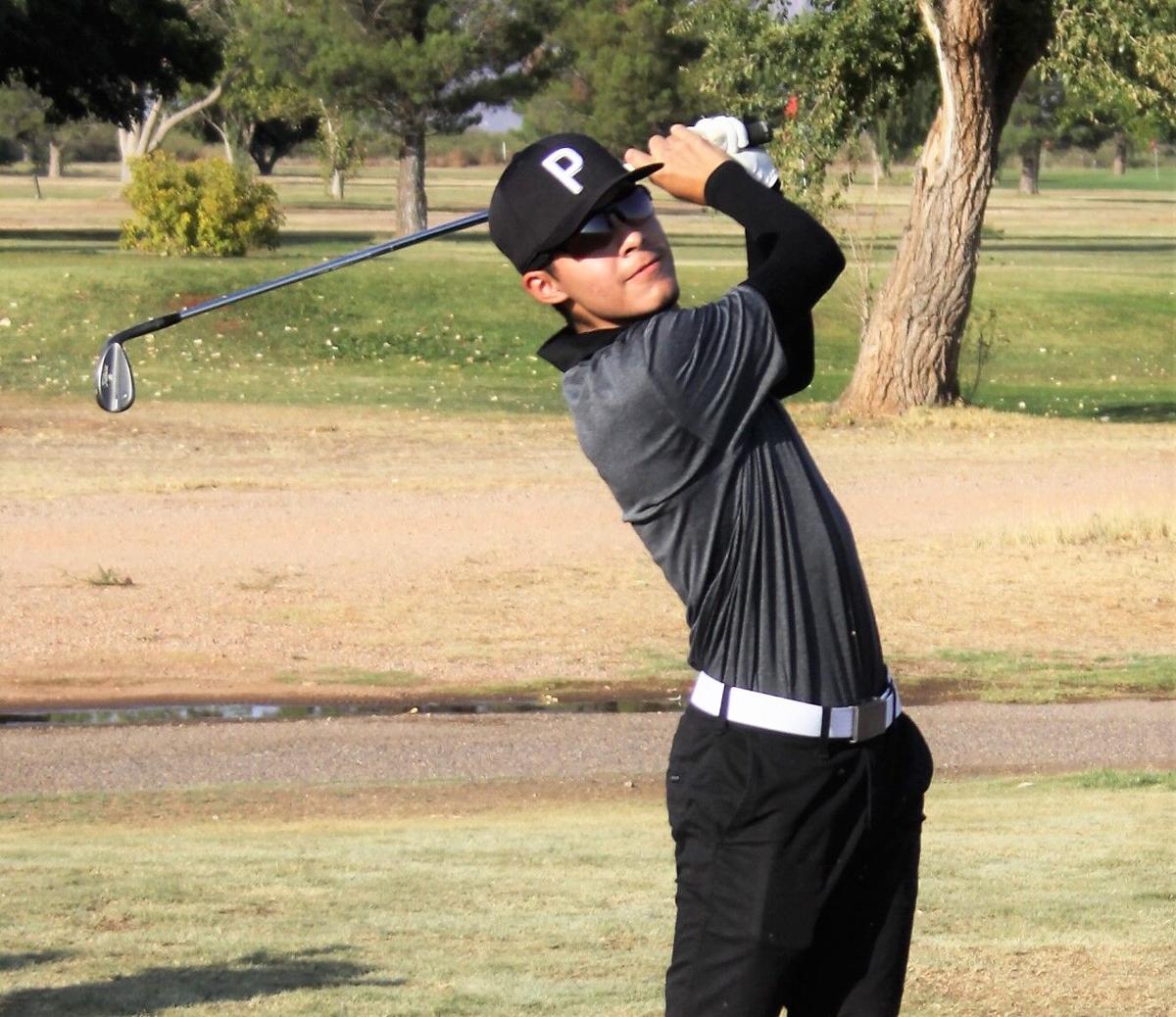 Senior Jay Zamora led the Bulldogs in Rio Rico with a score of 38. 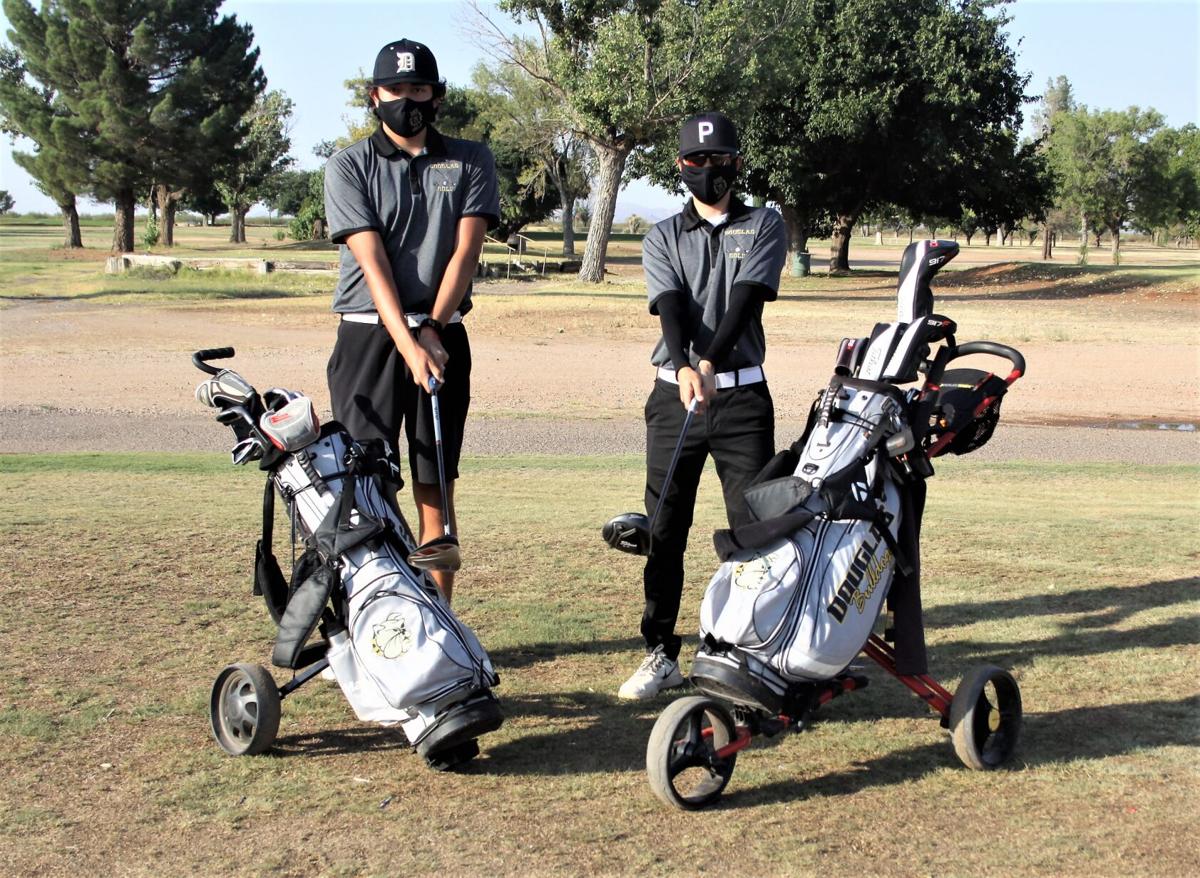 DHS seniors Trent Foreman and Jay Zamora are grateful they are able they can compete in their final high school season.

Senior Jay Zamora led the Bulldogs in Rio Rico with a score of 38.

DHS seniors Trent Foreman and Jay Zamora are grateful they are able they can compete in their final high school season.

DOUGLAS — Delayed by the COVID-19 pandemic, the Douglas High School golf team finally played its first match of the 2020 season on Tuesday. The Bulldogs teed off against Nogales and Rio Rico in a three-way match that was played at the Tubac Golf Resort.

Nogales won the match shooting a team score of 156, Douglas was second with a 177. Rio Rico did not have the required number of golfers needed to record a team score.

Senior Jay Zamora led the Bulldogs shooting a score of 38.

“It was nerve racking not knowing if we were going to have a season or not,” Zamora said. “I was hoping we would return because during this quarantine golf was one of the first sports to come back in the PGA. When we were allowed to only practice but not play, that’s when I got nervous.”

Sophomores Colton Boone and Aiden Rodriguez followed with scores of 42 and 47 respectively and senior Trent Foreman shot a 50.

“I just kept working as if we were going to have a season wanting to be ready if that were to happen,” Foreman said. “I had a rough start to my season but felt I finished well. There were a few shots I wish I had back.”

Douglas’ golf coach Bosco Selchow and his two seniors admitted it was nice finally getting the okay to play a competitive match even if it was six weeks later than the original start date.

“It was nice seeing them out there having fun,” Selchow said. “I knew they were ready. They’ve been ready, we just couldn’t play because of the restrictions. We had a couple of kids have first day jitters for the first couple of holes but they all rebounded.”

Zamora says he “feels at home” on the golf course and to be able to play on a course as nice as the one in Tubac was fun, yet challenging.

“There are some holes there that are kind of tough,” he said. “The course was beautiful. There was grass everywhere. The greens were fast. I felt I played well. I was happy with my score.”

Zamora is hoping to qualify for state this year but is aware it’s going to be tough since state begins Nov. 3. He is also hoping to land a spot on a collegiate team after high school.

“We are allowed to play three matches by ourselves but it has to be at a different golf course,” the coach said. “If we don’t get any more matches scheduled that’s what we’re going to have to do. We’re trying to get in somewhere with other matches already scheduled. It’s difficult because the Tucson schools can’t leave Pima County. Other schools are not transporting their kids. They have to get there on their own.”

Travel to and from athletic events has been a major concern for everyone. The four Bulldogs and their coach traveled to Tubac in a van.

“I checked everyone’s temperature before they got in the van. We had hand sanitizer in the van which was passed around before we left,” the coach said.“They had masks on the entire time and the van was large enough they were separated for the most part. We’re taking every precaution we can. It’s a lot different now. In all my years of being around golf this is the weirdest one ever.”

The DHS golfers will be in Sierra Vista this Monday for another three-way match this time with Buena and St. Augustine.