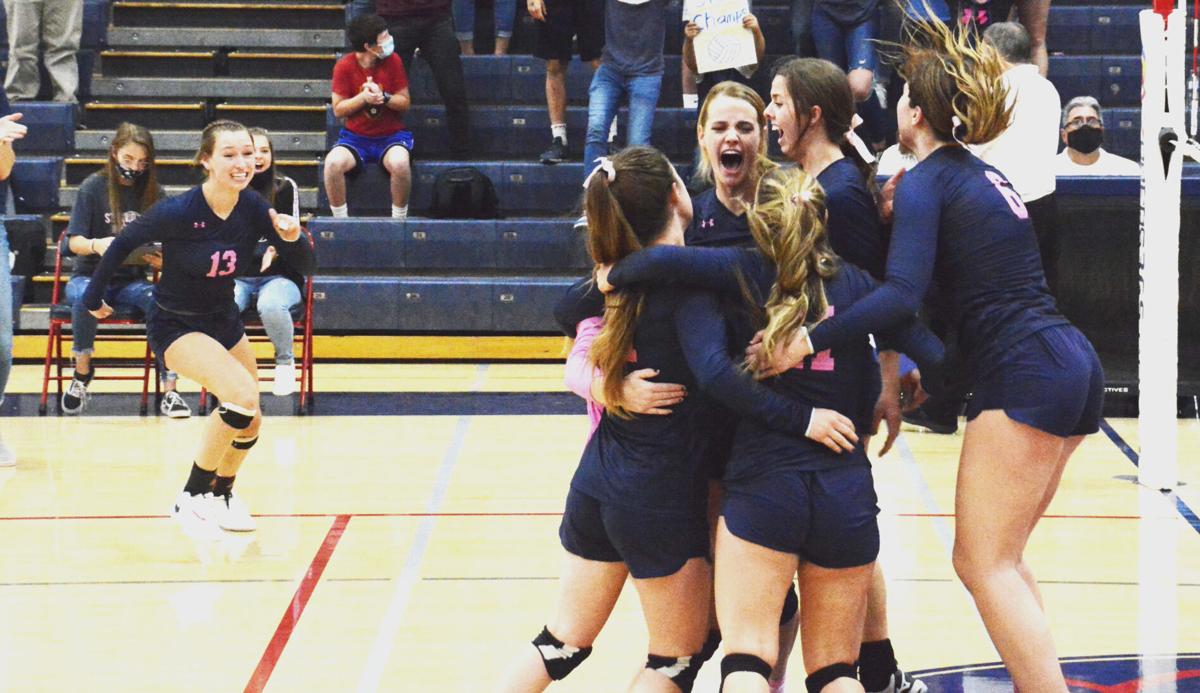 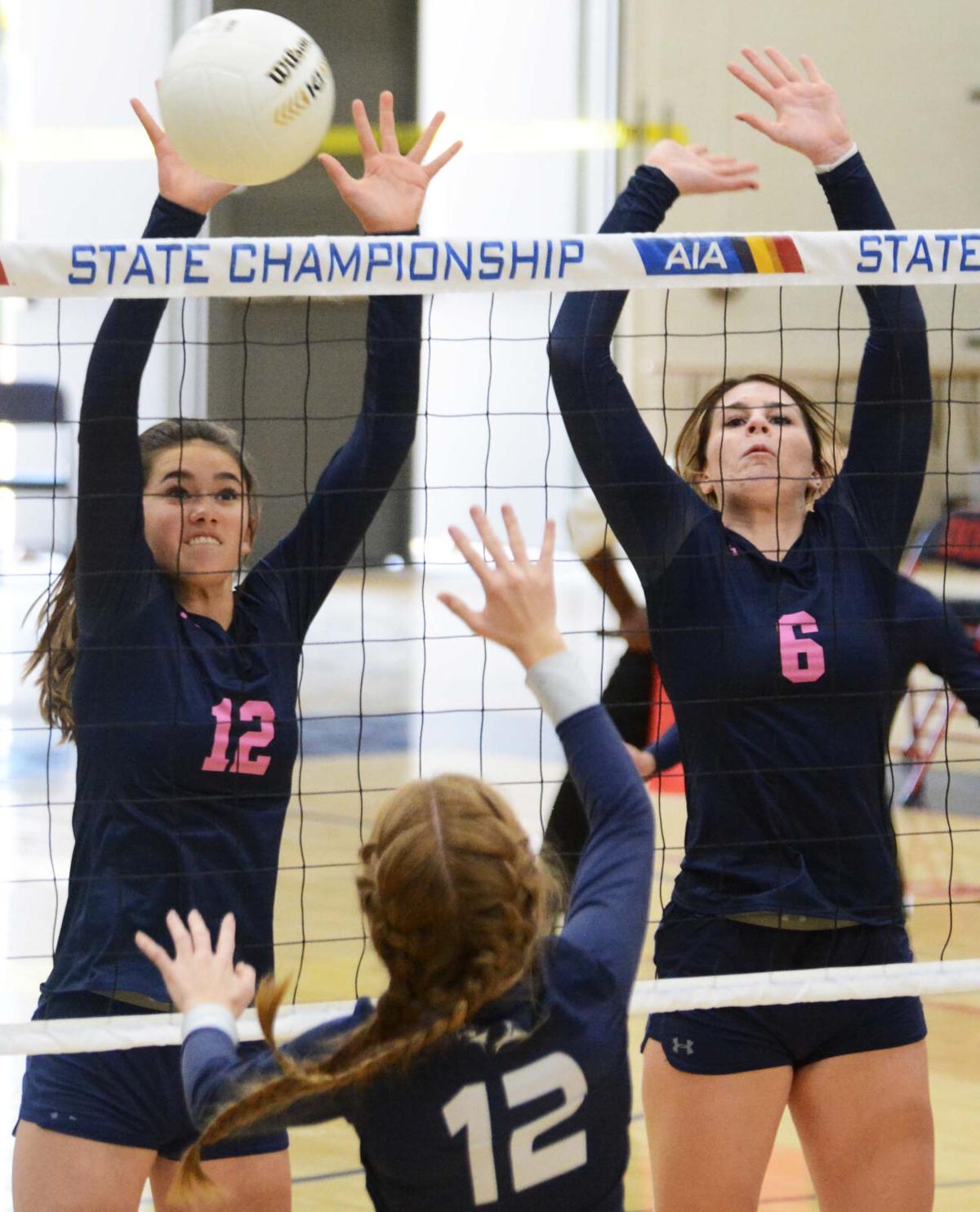 Anissa Jacquez and Kayla Judd make a block at the net. 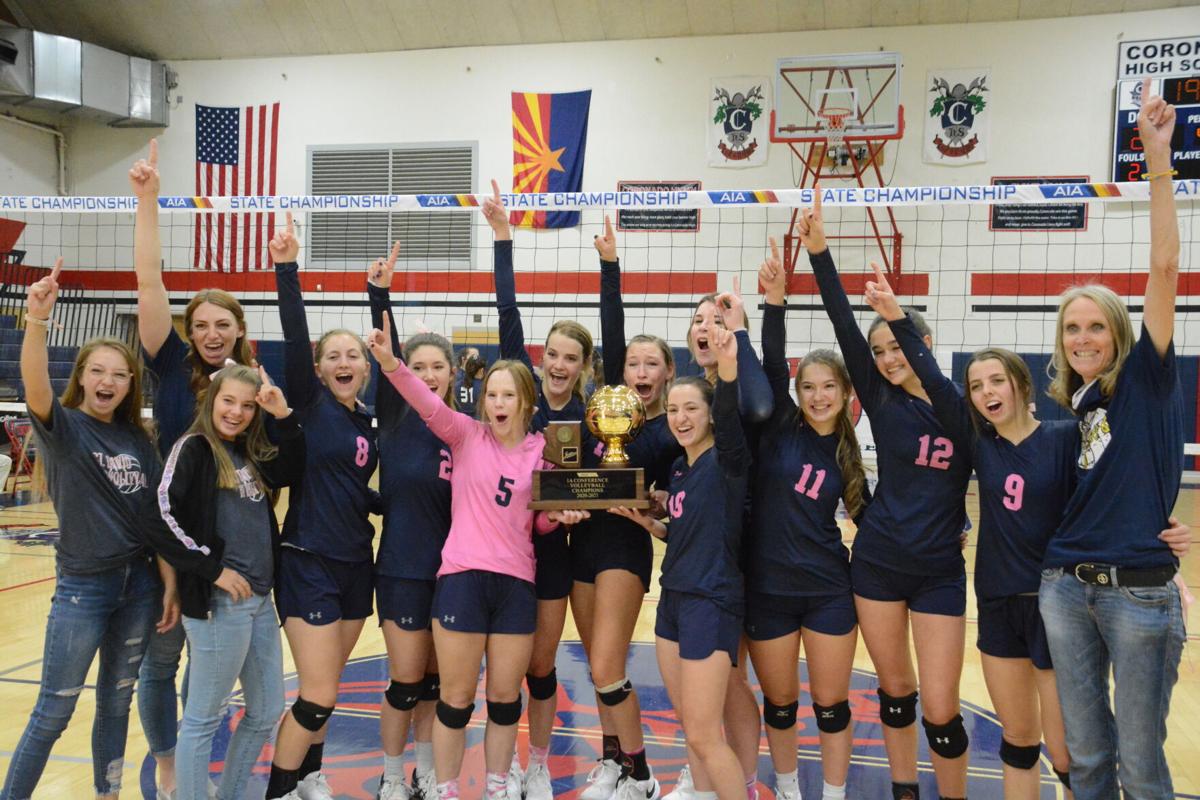 Anissa Jacquez and Kayla Judd make a block at the net.

PHOENIX — There are many roads that lead a team to a state championship. For the St. David Tigers’ volleyball team, that road came with a few obstacles. The Tigers, however, wouldn’t let those difficulties block their path to their dream of back to back state championships.

“It was exciting, especially since we had so many younger girls that have never been to state,” senior co-captain Brylee Murray. “Everyone stepped up and I had no doubt in my mind that we could win. Our coaches had prepared us for the pressure physically and mentally. It was up to us to execute what we practiced and we did that. I’m so proud of everyone and what we achieved.”

From having to practice and compete in their middle school gymnasium due to repairs being done to their high school gym, to meeting the requirements of COVID-19 rules and regulations, to games being cancelled or rescheduled, the Tigers still persevered through it all with that one team goal continually on their minds: win back to back state championships.

The Tigers’ season ended on Saturday with the 1A state championship game against Anthem Prep. One final cross court kill by senior Kayla Judd struck the floor untouched just inside the sideline that sealed their 3-1 victory over the Eagles. St. David achieved their ultimate goal of taking back-to-back state championships and winning the 2020 1A state volleyball championship.

The final two days of the Tigers season had them competing in four state playoff games.

The Tigers racked up 28 kills, 14 ace serves, and 12 blocks in the game. Leading in kills were Judd with 10, senior Sydney Klump with 9, senior Jaelyn Goodman with 5, senior Gennie Morrison with 2, and freshmen Anissa Jacquez and Mayla Trejo with one each.

Blocking at the net were Judd with 5, Goodman with 3, Morrison with 2, and Trejo with one. Trejo led with 4 service aces followed by Judd with 3; Klump, senior Goldi Merrill, and sophomore Taylee Jacquez with 2 each; and A. Jacquez with one.

Later that evening, the Tigers went up against the North Phoenix Prep Gladiators. The Tigers took control early, winning the first two games 25-18 and 25-23. The Gladiators put a stop to the Tigers chance for another 3-0 victory by taking the third game 17-25. Undaunted, St. David came back to win the fourth game 25-8 to end their day of competition, defeating the Gladiators 3-1.

With only four teams left in the 1A state tournament on Nov. 14, the Tigers would next take on the Tempe Prep Knights for their change to advance to the state title game. The Tigers would finish the contest 3-0, defeating the Knights 25-19, 25-19, 25-15.

Adding to their statistics, the Tigers spiked 26 kills, aced 5 serves, and blocked 28 hits at the net. Leading in kills were Judd with 14, Klump with 6, Trejo with 3, Goodman with 2, and A. Jacquez with one. Merrill and Taylee Jacquez led the Tigers with 2 service aces each followed by Murray with one. Judd stopped the most spikes with 18 blocks, Goodman with 6, A. Jacquez with 3, and Klump with one.

With their victory over the Knights, the Tigers would be taking on the Anthem Prep Eagles for their chance at back to back state championships. Anthem Prep came out strong in the first game, defeating the Tigers 26-24 to lead 1-0.

This was when the Tigers dug deep and leaned on the skills that they had been working on all season. It was St. David’s teamwork, volleyball skills, communication on the court, and belief in each other that led them through the next three games 25-20, 25-16, 25-21 and a 3-1 victory over the Eagles.

The Tigers ended their season statistically strong against the Eagles with 29 kills, 9 service aces, and 31 blocks. Judd led with 12 kills followed by Trejo with 5, and A. Jacquez, Goodman, and Klump with 4 each. Leading in aced serves were Murray with 5, Taylee Jacquez with 2, and Merrill and Trejo with one each. Blocks were led by Goodman with 10, A. Jacquez with 9, Judd with 8, and Klump with 4.

As the 1A state championship was now in the record books, additional Tiger statistics show the growth of St. David’s volleyball team over the last few years. The Tiger volleyball seniors have been to state all four years, taking two state championships and one runner-up trophy. Additionally, they have won four state titles and one runner-up title in the last 8 years.

As Tylene Miller reflects back on her 13th season as St. David’s head coach, the admiration she has for everything her athletes and assistant coach have accomplished and have overcome this year is evident.

“Words cannot express how proud I am of these young ladies,” she said. “They worked long and hard all year. They overcame lots of obstacles to become an outstanding team, state champions. Everyone stepped it up. Our seniors played amazing and our underclassmen, with not much experience, stepped up beyond measure and performed great.”