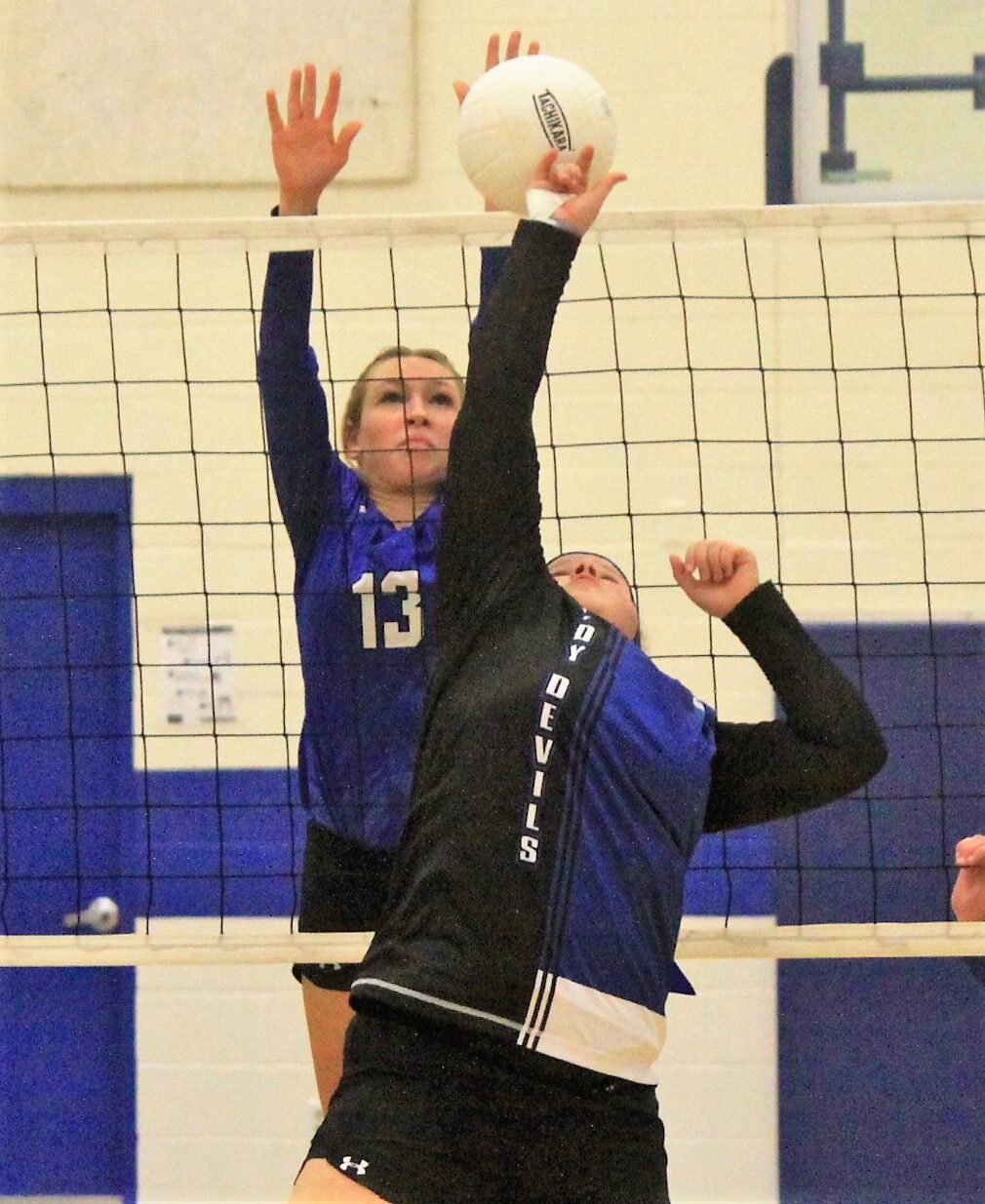 Valley Union's Baleigh Casady does a reverse hit with the ball in game three trying to get it past St. David's Jaelyn Goodman Thursday in Elfrida. 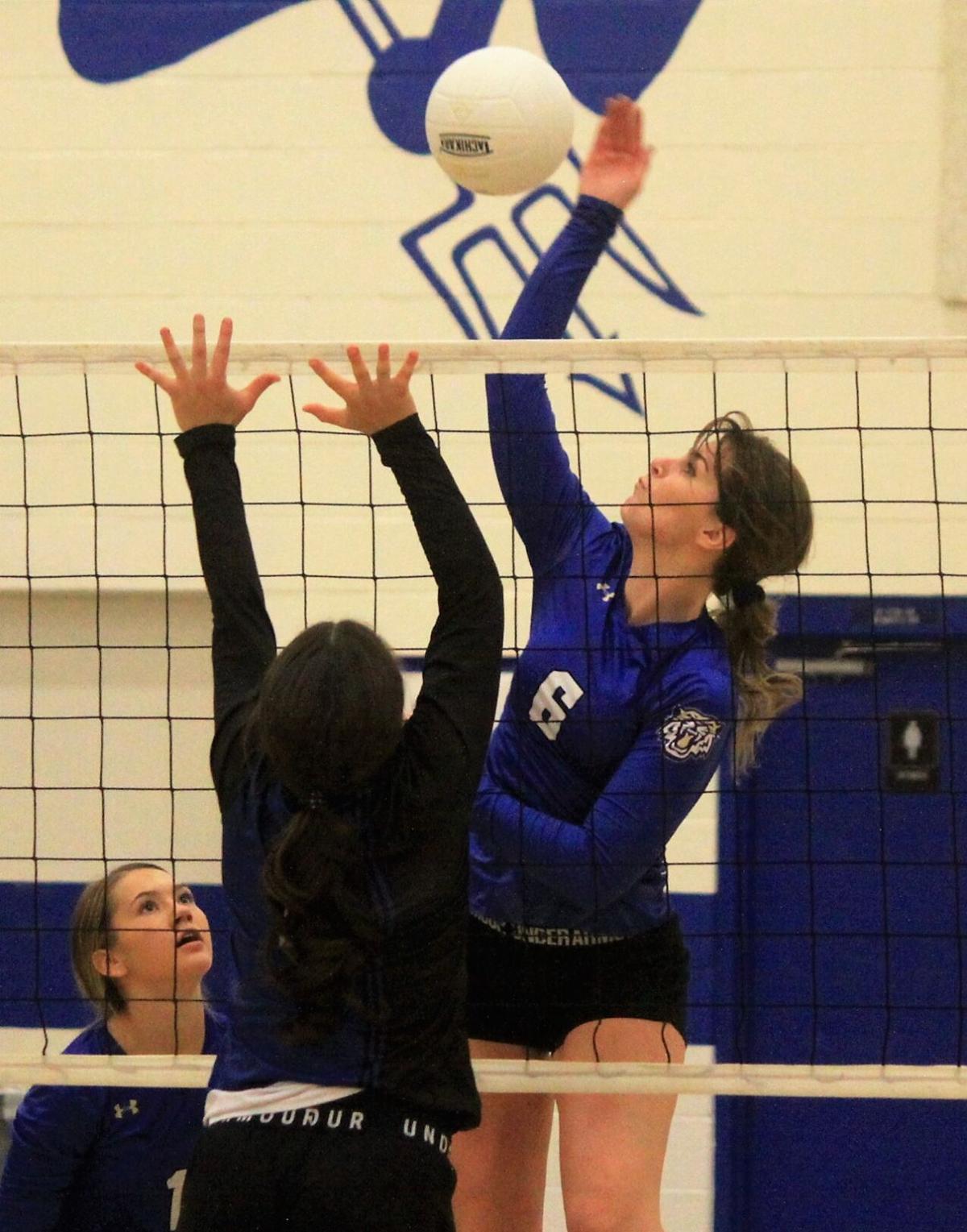 Valley Union's Baleigh Casady does a reverse hit with the ball in game three trying to get it past St. David's Jaelyn Goodman Thursday in Elfrida.

ELFRIDA — Playing their fifth straight volleyball match on the road, the defending 1A state champion St. David Tigers overcame a slow start and battled back from an opening game loss to defeat the Valley Union Blue Devils 3-1 in a non-conference match Thursday.

“Valley Union always puts up a good fight,” St. David coach Tylene Miller said after the match. “Their coach has done an outstanding job with that team from last year to now. I come in ready for a good match every time we face this team.”

Valley Union, who was swept 3-0 in all three matches it had with St. David last year was determined to break that streak.

“I thought we played well in the first game,” Valley Union coach Jenn Casady said. “These girls are very talented but they need to believe in themselves. They showed early on tonight that they can play with this team. We’ll see this team again in a few weeks at their place. We’ll be ready.”

In the first game, the Blue Devils jumped out to a 4-0 lead, eventually increasing it to 16-8 during which time coach Miller used two of her timeouts to try and motivate her team.

The second timeout seemed to work as St. David battled back behind the serving of freshman Mayla Trejo and some impressive kills and dinks from senior Kayla Judd. The Tigers pulled within one, 16-15, before taking a 19-17 lead.

Tied at 23-23, Camley Esquer’s kill gave the Blue Devils a 24-23 lead and a St. David hit that went out of bounds on the next point gave Valley Union the win.

“There’s no reason for us to play the way we did tonight in that first game,” Miller said.“Sometimes it’s good to have an eye opener. My girls need to realize they have to play good ball no matter whose court they’re on.”

The second game was all St. David as the Tigers led 12-0 before Valley Union scored its first point.

St. David led 24-9 when the Blue Devils rallied, behind the serving of sophomore Jazmyn Garcia, whose serving cut the Tigers lead to 24-16 before a block by Jaelyn Goodman bounced off a Blue Devil player and out of bounds giving St. David the win and tying the match at 1-1.

Judd had three big back-to-back-to-back kills in game three which all led to points for the Tigers and powered them to a 21-7 lead. Her block for the final point of game three gave her team a 2-1 lead going into the fourth and final game of the night.

The Tigers, just as they had done in the two previous games, jumped out to an early lead and at one point led 21-4 before coming away with a 25-9 win to take the match.

Miller said she’s happy her team will finally be at home for a while now as four of the Tigers next five matches are in St. David.

“There is so much talent on this team we just need to get all the kinks worked out,” Miller said.

The coach praised Judd who unofficially registered 21 kills saying “she pretty much owned the net tonight.”

St. David, 4-1, hosts Duncan on Oct. 15 while Valley Union, 2-3, will be off until Oct. 20 when they head to Tucson for a rematch with Desert Christian who they defeated 3-1 last week in Elfrida.