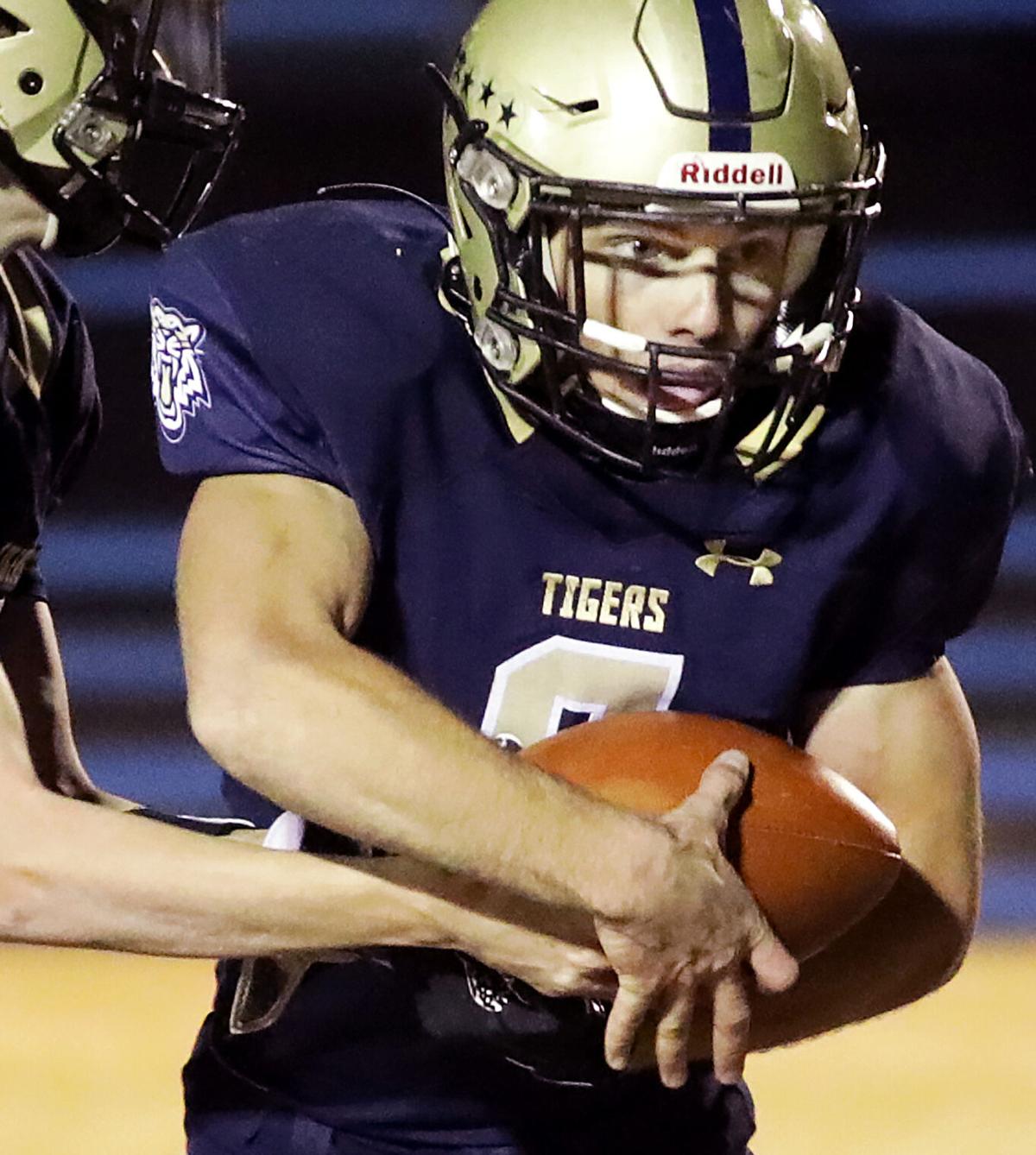 St. David junior running back Talon Haynie takes a handoff on his way for good yardage against the Williams defense Friday. 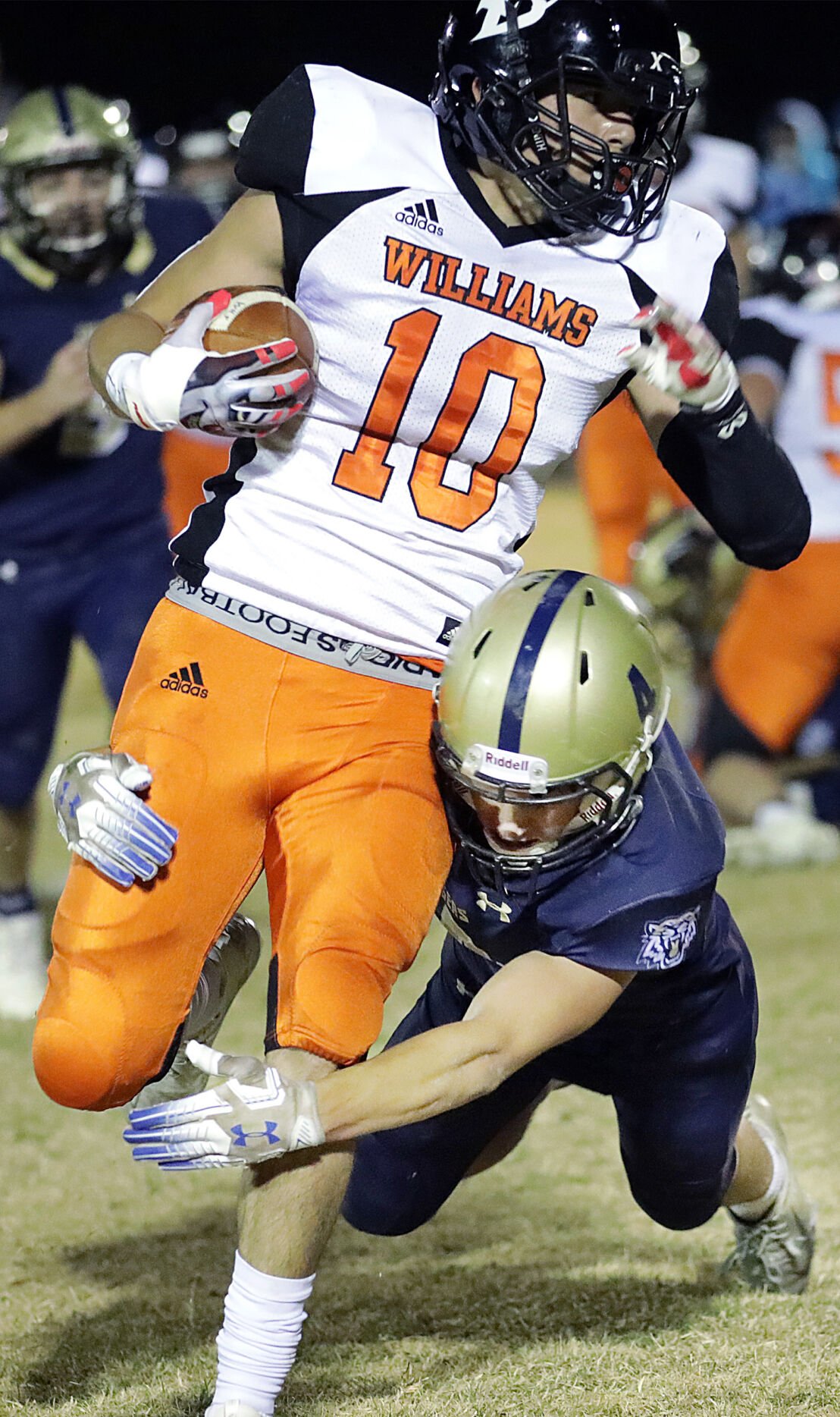 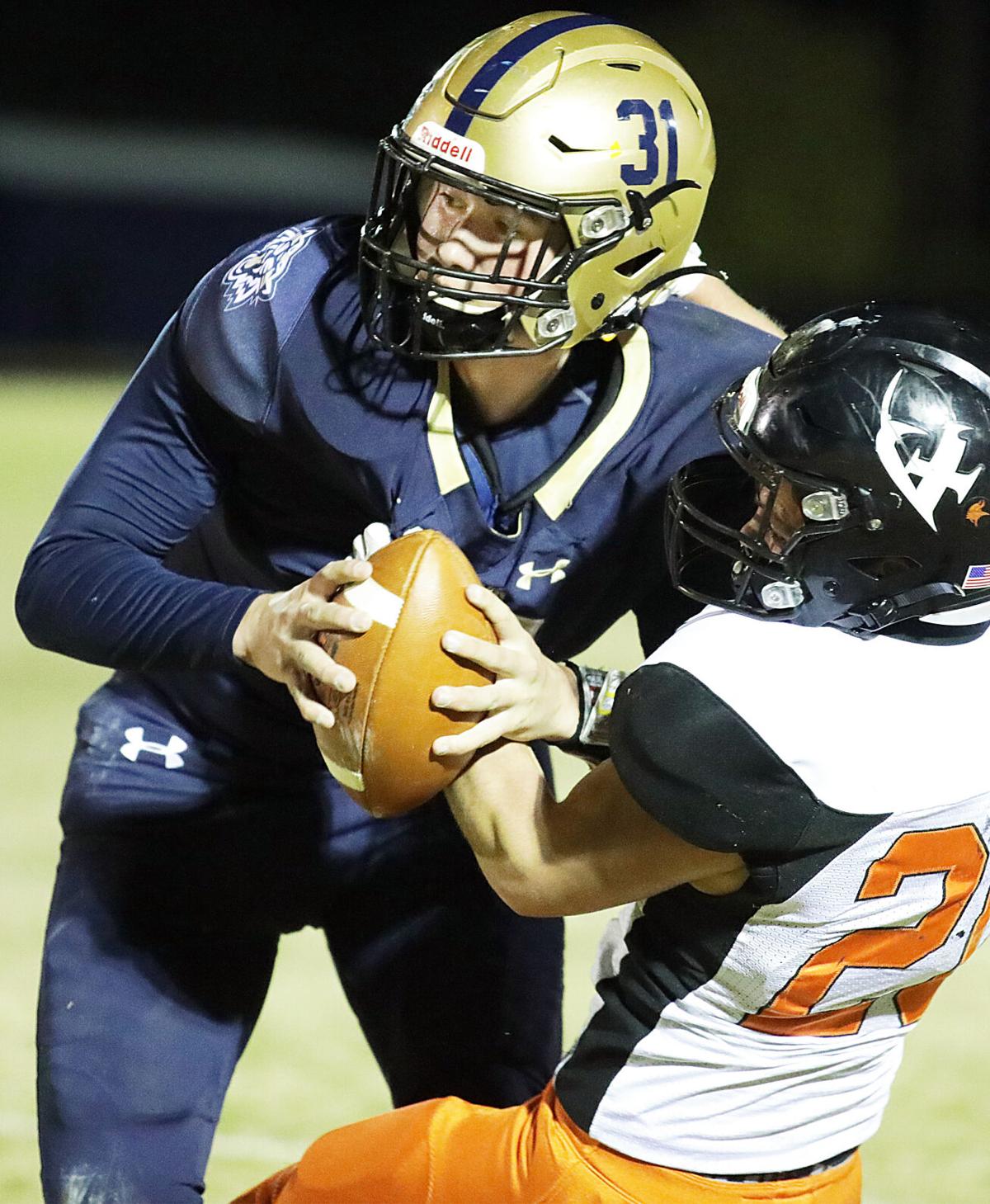 St. David junior running back Talon Haynie takes a handoff on his way for good yardage against the Williams defense Friday.

ST. DAVID — After a perfect regular season, the Tigers were eliminated from the 1A state playoffs Friday night after St. David lost 38-20 to Williams at home to conclude the season.

“We had the misfortune of drawing Williams in the first round of eight playoff teams,” Tigers coach Braden Davis said. “They were ranked No. 2 and we were No. 4, but this year the 1A used a committee to seed the playoffs and ignored the rankings.

“We needed a game like this against a top-five opponent during the season, but unfortunately didn’t have one until the playoffs. Williams is very tough. They are the defending state champs and have won two of the last three titles.

“Being a much bigger school helps, but they’ve still built a great program there. We believed and hoped we’d still be playing right now, but still accomplished a lot this year by going undefeated in the regular season and winning the 1A South region.”

Penalties, turnovers and mistakes hurt the Tigers the entire game. Williams received the ball to start the game and the Tigers defense forced a punt. However, a roughing the kicker call against St. David gave the Vikings an automatic first down and moved the ball up field.

Jesse Sagor capitalized on the call for the visitors with a 30-yard touchdown run. Williams missed the 2-point conversion but led 6-0 with 9:33 to play in the first quarter.

St. David responded on its first offensive series of the game. Logan Davis connected with Kason Jaquez on a 40-yard pass play to move the ball into Williams’ end of the field.

Davis connected with Jake Goodman on a 10-yard pass for a touchdown. Talon Haynie ran the ball in for the extra two points, and the Tigers led 8-6 with 8:21 to play in the opening quarter.

Just over a minute later, Koy Richardson picked off a pass for the Tigers and returned the ball to the Vikings’ 6-yard line. Davis connected with Reo Larson for a 16-yard touchdown pass. The two-point try was stopped but the Tigers led 14-6.

Less than a minute later Williams’ Zain Grantham found Drew Logan downfield for a 50-yard score. Sagor ran in for the 2-point try to tie the game 14-14.

St. David came up with the first key play of the second quarter when Haynie broke the tie with 7:30 left in the half with a 5-yard touchdown run. The Tigers were stopped on the 2-point try, taking the score to 20-14.

Williams tied the game once again late in the second quarter on a 3-yard pass from Grantham. They were stopped on the 2-point try, and the teams went into halftime tied 20-20. St. David had 70 yards of penalties called against it in the first half.

The Vikings showed why they are defending state champs in the second half, adding six points to their score in the third quarter while shutting down the Tigers on offense. The Williams defense picked off Davis twice in the quarter. Williams led 26-20 heading into the final quarter.

Davis threw his third interception of the half on the Tigers’ first drive of the fourth quarter. Williams turned the turnover into points on a 61-yard pass play from Grantham to Logan.

The Vikings added to their lead on a 15-yard fumble recovery by Grantham late in the fourth quarter. St. Davis was held scoreless in the second half.

The Tigers finish the season with a 5-1 overall record.

“I am very proud of our guys,” Davis said.”I’m honored to have coached these guys. They are a phenomenal group of young men. We also understand how fortunate we’ve been to even get to play this year — the year of the virus.”