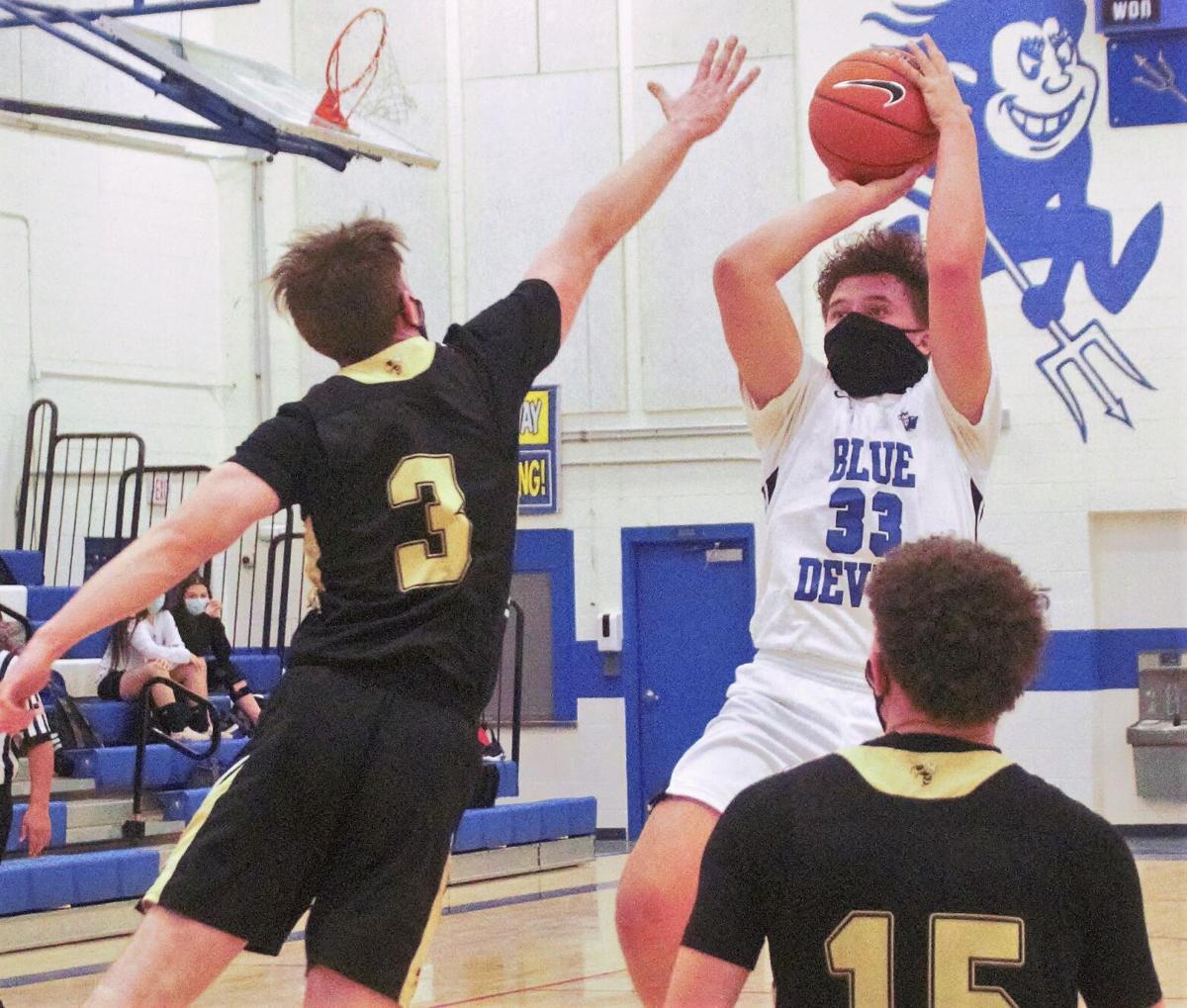 Zeke Stewart puts up a shot for Valley Union early in the game Monday night with Tombstone. His three-pointer as time expired gave the Blue Devils a thrilling 38-35 come-from-behind win. 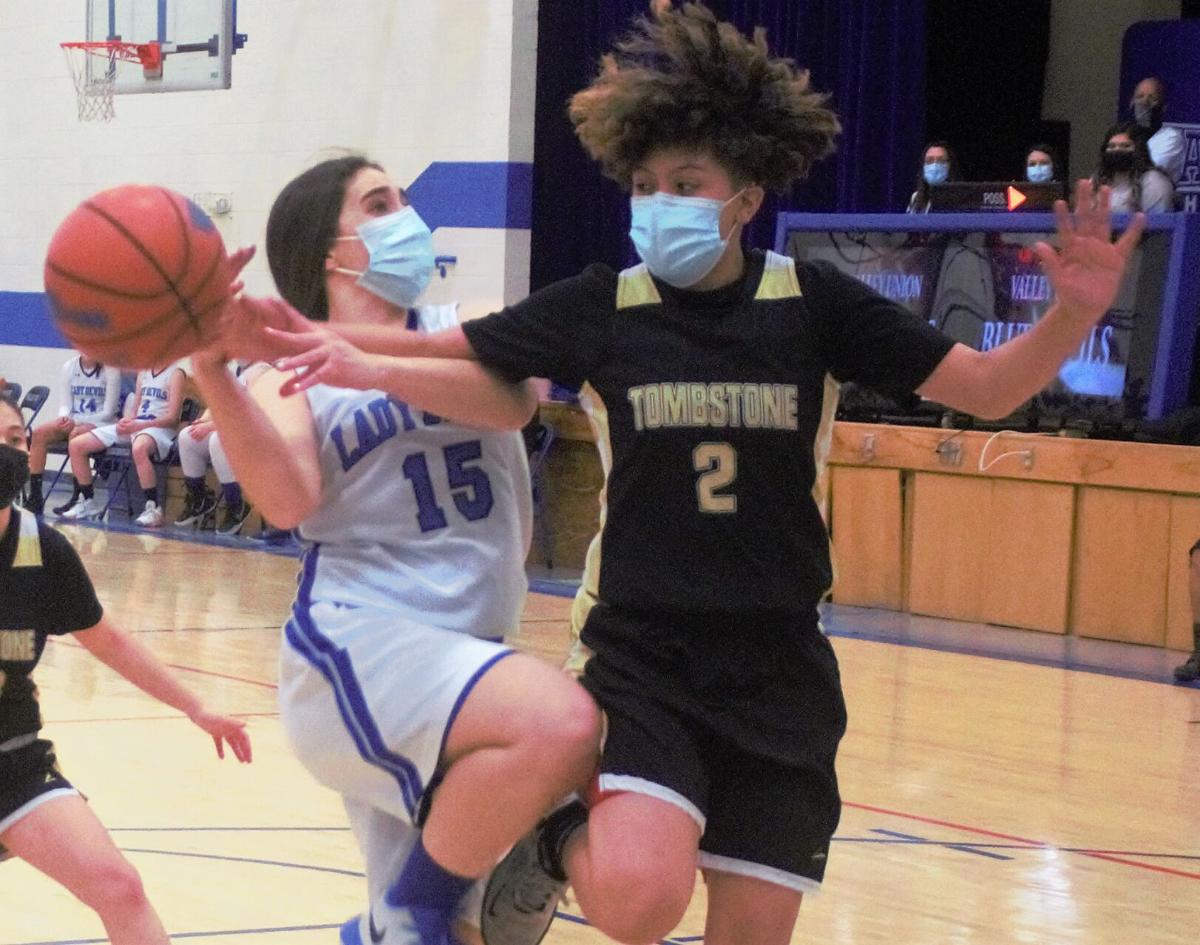 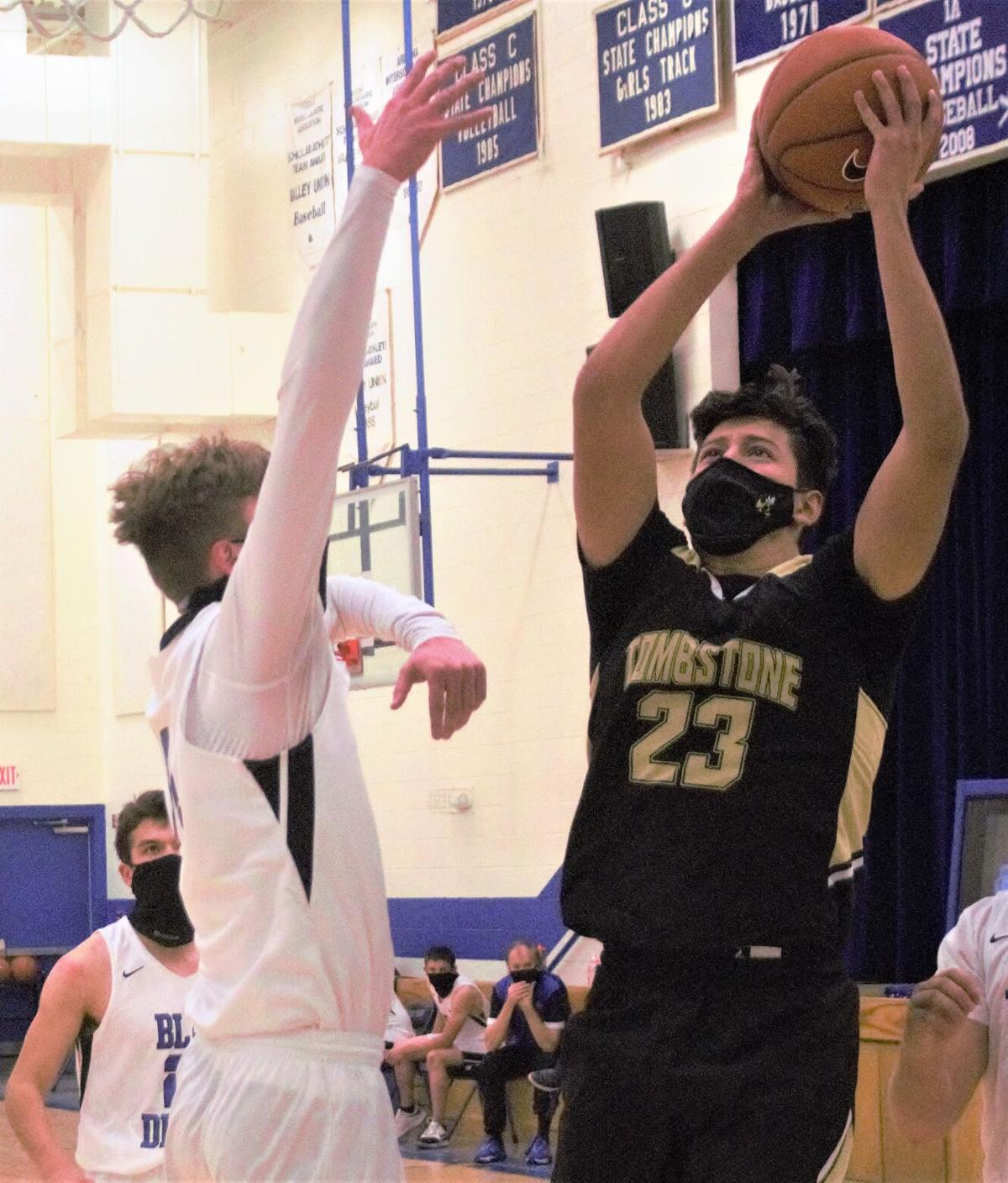 Tombstone's Myan Moreno fights off Valley Union's Bradley Noble as he puts up a shot late in the game.

Zeke Stewart puts up a shot for Valley Union early in the game Monday night with Tombstone. His three-pointer as time expired gave the Blue Devils a thrilling 38-35 come-from-behind win.

Tombstone's Myan Moreno fights off Valley Union's Bradley Noble as he puts up a shot late in the game.

In the girls game prior to the boys game, Valley Union overcame a slow start to beat Tombstone 32-25.

The Tombstone boys jumped out to an early 8-0 lead and later in the first quarter had an 11-2 lead.

Valley Union clawed back to within five points in the second quarter, only to see Tombstone counter with a run of its own taking a 25-17 lead at the intermission.

Sean Kacerga and Ernest Withers would connect on three free throws early in the third quarter, giving Tombstone its largest lead of the night at 28-17. Those would end up being Tombstone’s only points of the quarter as the Blue Devils proceeded to go on a 12-0 run with Bradley Noble and Alberto Marmolejo each scoring four points during the stretch that allowed Valley Union to take its first lead of the game, 29-28, going into the fourth quarter.

The final quarter was a thriller as both teams traded baskets and exchanged leads. Kacerga’s 3-pointer with les than two minutes remaining gave Tombstone a 35-33 lead.

Tombstone managed to keep the ball out of Valley Union’s hands until the waning seconds. With 2.1 seconds left in regulation Marmolejo put up a 3-pointer that missed. He was fouled on the play and was sent to the free-throw line with a chance to possibly tie or win the game. He made the first shot, missed the second and bounced in the third, tying the game at 35-35.

Tombstone committed a costly turnover on the in-bounds pass, giving the ball back to the Blue Devils with 2.1 seconds left under their own basket.

Stewart was down in the corner near the baseline when he received the inbounds pass and put up the shot that split the net, giving Valley Union the win as time expired.

“I just love it when the crowd gets quiet right before something big happens and then explodes as they do when it does happen,” Stewart said after his game winning shot. “When I shot, it felt good and I knew it had a good chance of going in. I’m just glad it did. I did not play all that well tonight and I’m really grateful my teammates stepped up and played as hard as they did.”

Stewart finished with a team-high 12 points. Jacob Sonke, who fouled out late in the fourth, had 10, Marmolejo eight and Noble six.

Kacerga led all scorers with 16 points for Tombstone, 15 of which came from beyond the arch. Nic Campbell followed with seven.

“Our defense saved us tonight,” Valley Union coach Jeff Baker said after the game. “We held them to single digits in the third and fourth quarter tonight which allowed us to get going offensively. Tombstone played a very physical game and Zeke wasn’t hitting his shots tonight. Fortunately he was able to get open for that last shot.”

The coach said for a moment late in the game he thought his team was headed toward its second straight overtime.

In the girls game, Valley Union jumped out to an early lead, allowed Tombstone to come back in the second quarter and take a brief two-point lead before baskets by Lizete Sonke, Victoria Armijo, Baleigh Casady and Breiah Twomoons gave the Blue Devils a 17-8 lead.

Tombstone battled back to within five at the half and then outscored Valley Union in the third pulling within three, 20-17, into the fourth.

Arceli Blackwell’s bucket early in the fourth pulled the Yellow Jackets to within one at 20-19. Valley Union responded with a 10-0 run as Breana Enriquez scored seven of those points, giving the Blue Devils a 30-19 lead with less than two minutes remaining.

Blackwell would finish the night as Tombstone’s top scorer, with 10 points. Hailey Flores would follow with eight.

Twomoons, a true freshman playing in only her second varsity game, and Enriquez, a junior, each scored nine points to lead Valley Union in scoring. Twomoons also had six steals for the second straight game.

The young freshman said after the game playing high school varsity basketball is harder than middle school but she is learning, having fun and just happy to be out on the court with her teammates.

“I’m learning a lot every game,” she said. “My coaches and teammates are really helping me.”

Her coach, Dusty Vasquez, said Twomoons, for being so young, has really stepped up her game and has a bright future ahead in basketball.

Looking at the game the coach said it took a while for his team to get in the groove of things.

“Not being able to practice much because of COVID, we’re basically practicing now as we’re playing the game,” he said. “It took us a while to get into rhythm tonight. Tombstone came out and was very aggressive, more aggressive than we had seen in the past. That kind of threw us off. Once we settled down these girls stepped up and produced. We just need to learn that once we get a lead to not slack off and keep the pressure on.”

Valley Union, 2-0, hosted Fort Thomas on Tuesday and then head to Tombstone Thursday for a rematch with the Yellow Jackets.