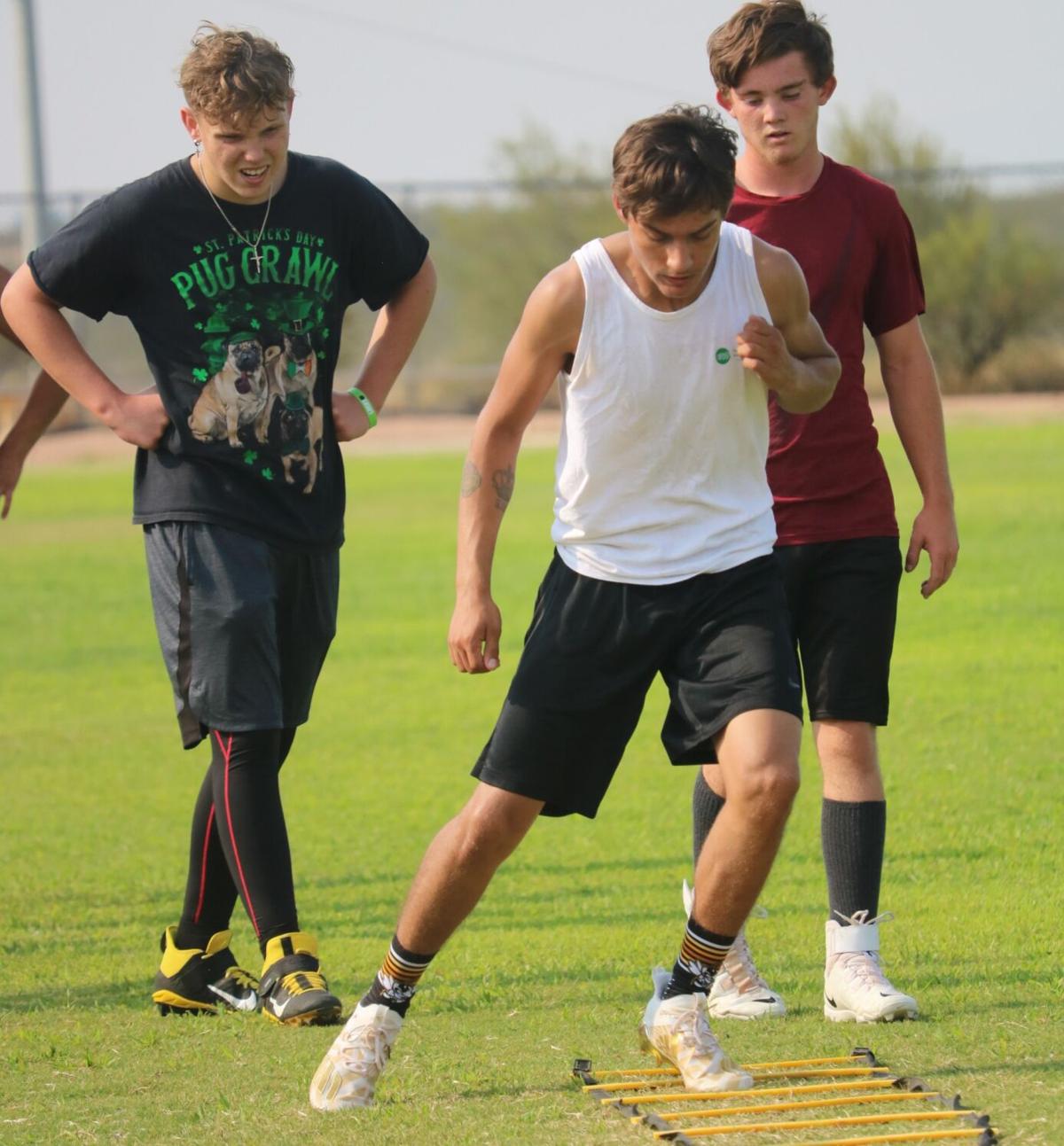 Payton Foster leads his group of teammates to ladder drills on Monday. 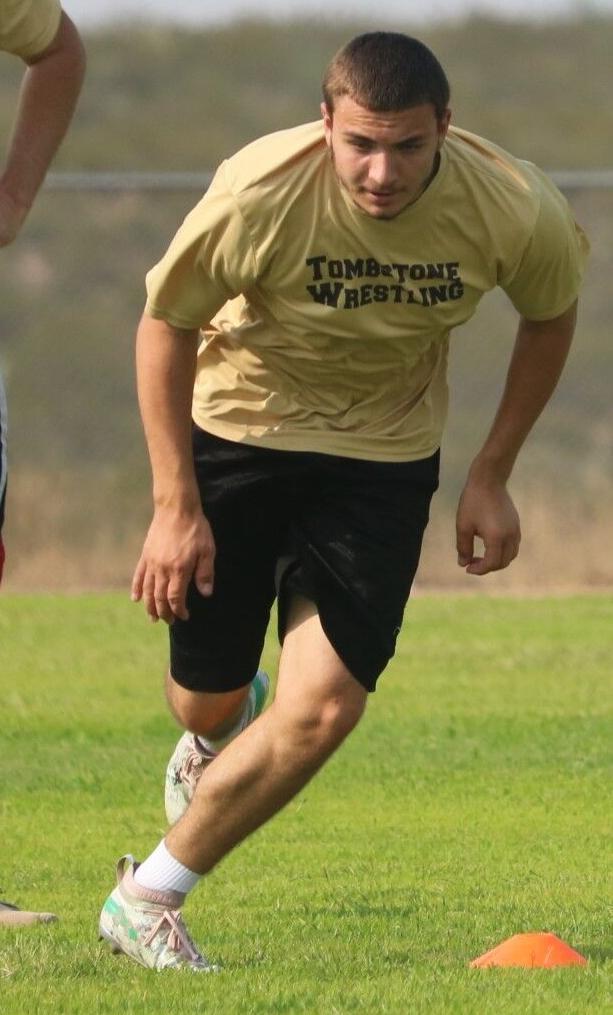 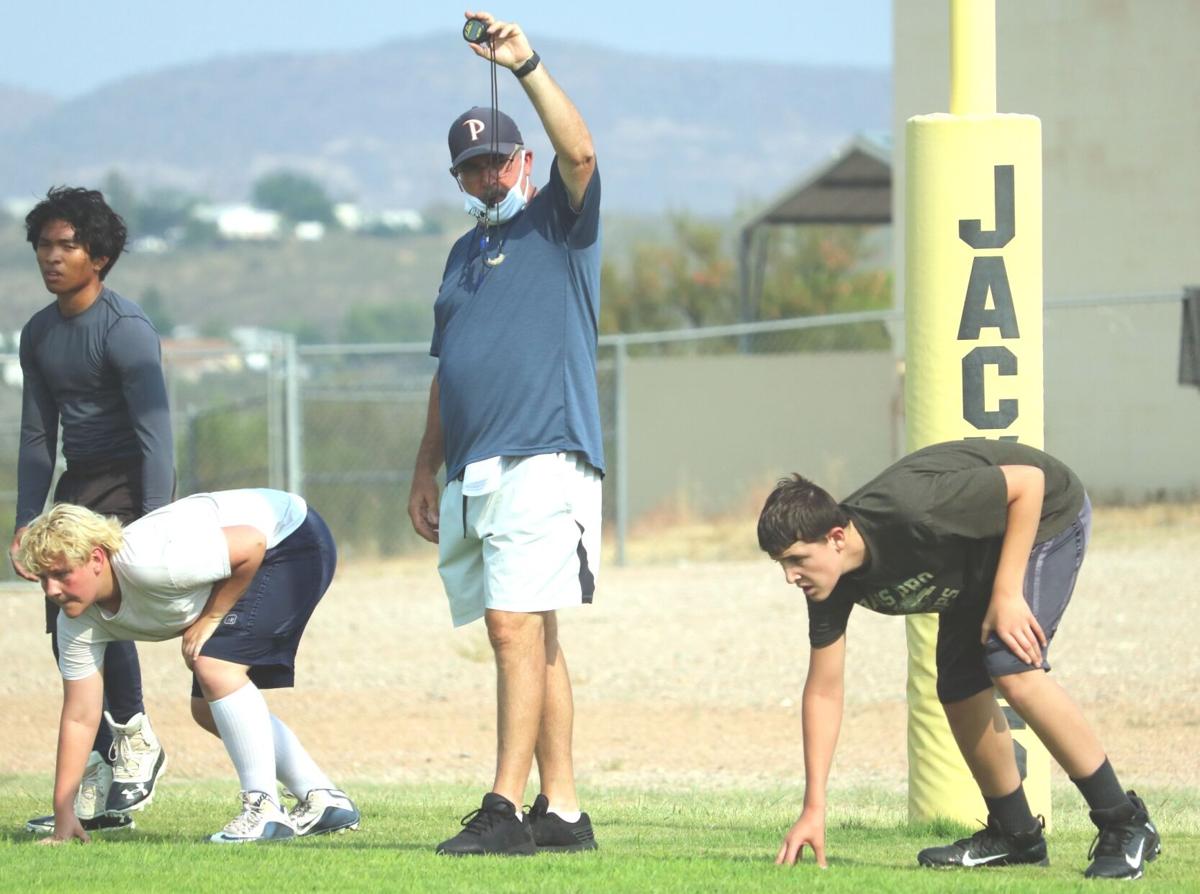 Payton Foster leads his group of teammates to ladder drills on Monday.

TOMBSTONE — Whistles filled the air surrounding Tombstone High School Monday afternoon. All that was missing was the colliding of pads and plays being called out.

But, even though it wasn’t a typical practice day for the Yellow Jacket athletes, they were happy to be on the field and running hills again.

“After being home for so long it’s good to get out here and run around,” said Tombstone football player Payton Foster.

“It’s fun to be out here,” Oliver said. “It’s a good feeling that most of the seniors can enjoy most of their sports this year.”

Tombstone football has practiced throughout the summer with a couple halts due to COVID-19 but are preparing for their season, which is scheduled to kickoff Oct. 2.

In an effort to be as safe as possible coaches and players are following guidelines set by the AIA and the CDC. Coaches wore masks, players were in groups no larger than 10 and each player had their own water bottles.

“Our coaches follow the guidelines,” Foster said. “I trust them to keep us safe.”

Yellow Jacket football coach Jerry Rhoades said he has just over 30 players out right now, which is a huge improvement for the team that finished with 11 players last season. The attendance excited Oliver and Foster as it’s a good indication that they will have support on the sideline and won’t have to play on all sides of the ball.

“It’s a great feeling. All the seniors can play the year and have a good team and teammates to pick you up,” Oliver said about the increased number of players.

Football wasn’t the only sport in action at the high school on Monday.

In the front of the building cross country coach Jake Winslow had his team running up and down a hill. Monday marked the official first day of practice for cross country, which allows races to start on Sept. 9.

“In cross country you can stay spaced,” Winslow said. “It’s probably one of the safer things you can do in sports.”

Senior Quinten Palmer found it hard to describe what it means to have the opportunity to run and compete for the Tombstone cross country team again.

Winslow said last week when school started was the first time he has seen his runners since last year. He said he provided them with workouts but it’s evident they didn’t do them fully, which he expected. Being back out doors and coaching was welcoming and exciting for Winslow as it adds a little bit of normalcy to a time of uncertainty.

“Even now I’m skeptical the season will finish,” Palmer said. “But I’m hopeful.”